Charles, 73, and Camilla, 74, say they are determined to continue foreign tours


The Duchess of Cornwall has insisted that she and her husband ‘still have a snap in their celery’ and are determined to keep on touring for Queen and country.

Camilla, 74, was speaking as she and the Prince of Wales, 73, finished their whirlwind Middle Eastern tour on behalf of the British Government.

And she stressed that their trip, which saw them carry out more than 30 engagements between them over four days in Jordan and Egypt, was far from being about ‘holiday pictures’ but about helping to build stronger bi-lateral relations. 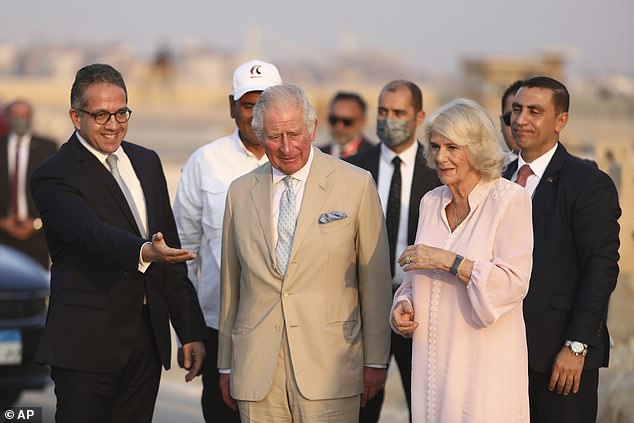 Britain’s Prince Charles and his wife, Camilla visit the pyramids of Giza, on the edge of Cairo, Egypt, Thursday, Nov. 18, 2021. The visit is part of the royal couple’s first tour since the start of the coronavirus pandemic 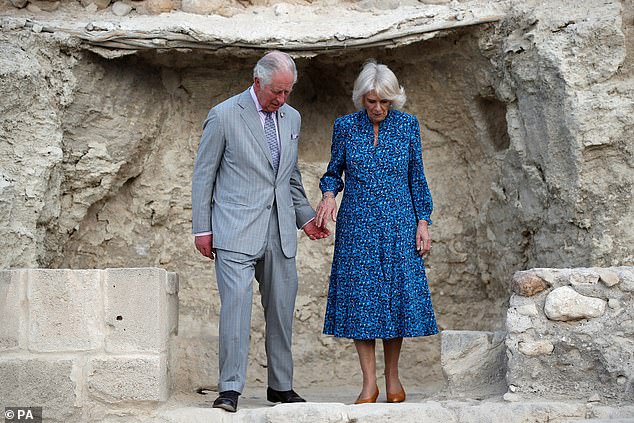 ‘Jordan has been a great ally for a hundred years and we want to celebrate this. And Egypt, everyone is so friendly. ‘

The duchess referred to a lunch she had recently attended for the Oldie Magazine and how its editor, Richard Ingram, referred to people of a certain age as still having a ‘snap in their celery’. 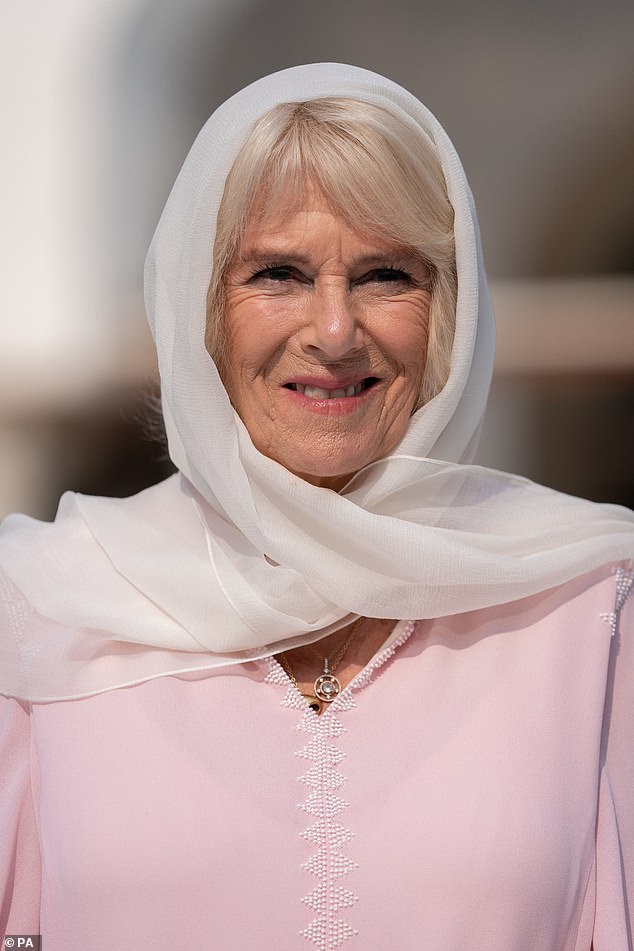 The Duchess of Cornwall during a visit to Al Azhar Mosque in Cairo, Egypt

Signalling her and Charles’ determination to follow in the Queen’s footsteps and to go on with their public duties, she said: ‘ I’m a lot older now. Well into my 70s. But to quote Richard Ingram, “we’ve still got a snap in our celery”.

‘I have thought about that. I did the oldies luncheon, it is so true. I like to think we’ve still got a snap our celery.

‘It’s such a good expression. I think about it every time. The snap going off.’

This week’s successful tour was the first that the duchess and the heir to the throne have undertaken for almost two years because of the Covid pandemic.

Asked how it was being back on the road again, Camilla enthused: ‘Actually after the initial shock of the first day, getting decked up again, it’s been rather nice. 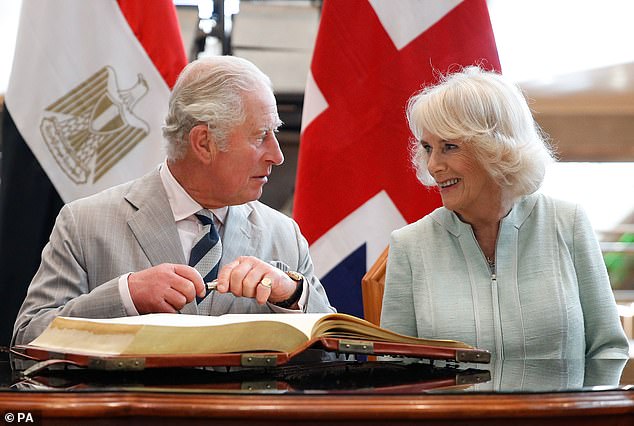 The Prince of Wales signs a visitor’s book as the Duchess of Cornwall looks on during a visit to Bibliotheca Alexandrina in Alexandria, Egypt on the last day of their tour of the Middle East. Picture date: Friday November 19, 2021 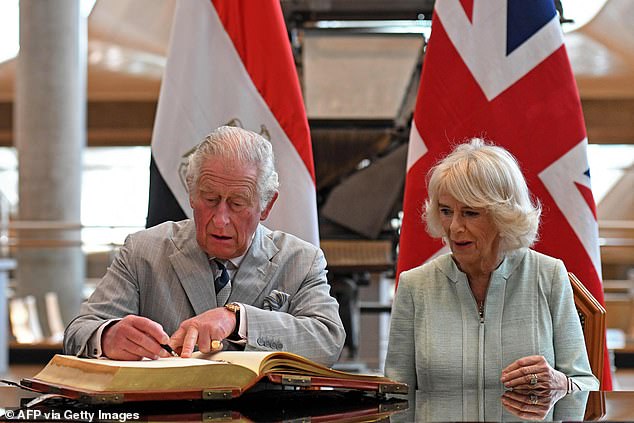 Prince of Wales, accompanied by his wife Camilla, Duchess of Cornwall, sign the guestbook during their visit to the Bibliotheca Alexandrina in Egypt’s northern Mediterranean coastal city of Alexandria on November 19

‘You never think you are going to, but once you get started you slightly remember you have done it before. And suddenly it’s gone in a flash.

‘We’ve all been at home. We’ve haven’t been doing things. So it’s quite strange to up sticks and here we are, again.

‘It was quite tough, we were driving a lot….and it was pretty bumpy.’

She said it was hard to pick out a favourite moment, but said their visit to Juwafat al-Kafrayn – the site of Jesus’ baptism – by the River Jordan was an extraordinary and ‘spiritual moment’. 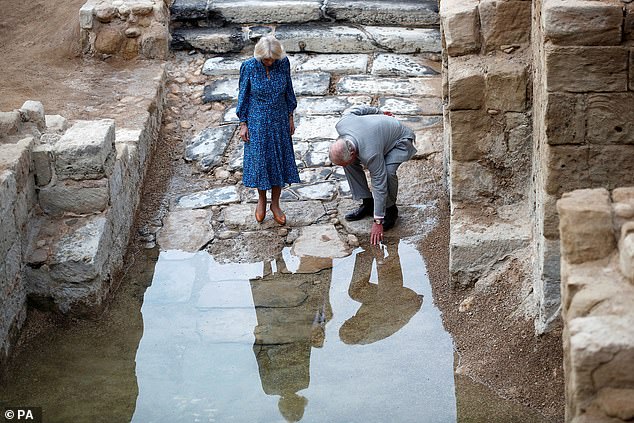 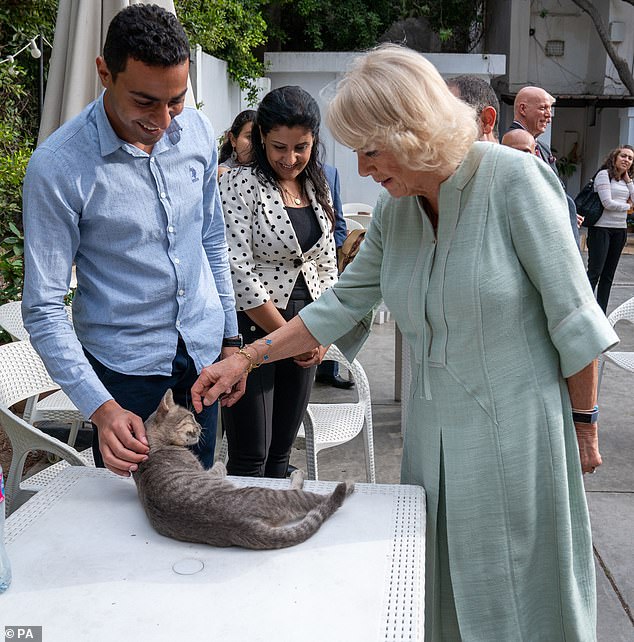 The Duchess of Cornwall during a visit to the Jesuit Cultural Centre in Alexandria, Egypt on the last day of her tour of the Middle East

‘Well for me, I think actually the baptism site.

‘It was extraordinary, something you read about. To actually go down there, you know, and experience it.

‘It was a surreal moment and very spiritual. I think that does stand out for me.

‘But everything was so remarkable.’