A cheese advent calendar that sparked a global frenzy when it was first launched three years ago is back with five new flavours.

Food blogger Annem Hobson, 31, from London, who runs food blog So Wrong It’s Nom, created the UK’s first ever cheese advent in 2016, after getting frustrated at the lack of festive cheese offerings at the supermarkets. 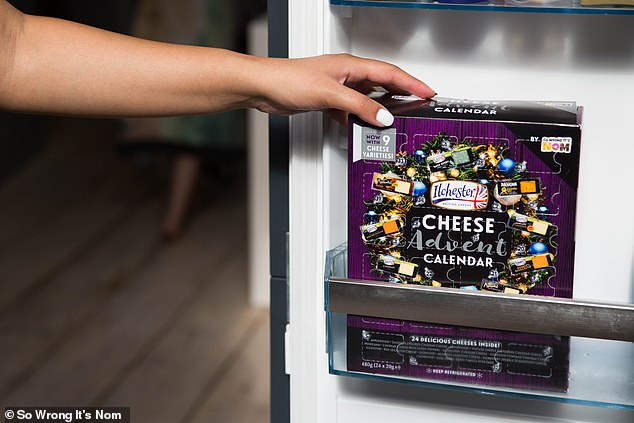 A cheese advent calendar that sparked a global frenzy when it was first launched three years ago is back with five new flavours. The edible Christmas countdown features slithers of cheese behind each door, which this year includes spicy Mexicana, Ilchester mature Cheddar and Applewood Vintage PDO

In response to feedback from cheese lovers on the 2019 design, Annem has produced a more compact calendar for 2020, with 81 per cent less plastic but no less cheese.

What cheeses are in the calendar?

· Applewood – A real English treasure, Applewood is made in the West Country from British cheddar and has a delicate smoky flavour and a lovely smooth texture, all finished with a dusting of paprika for good measure.

· Applewood Vintage PDO Aged for 12 months – This delicious cheese is made from traditional hand-turned farmhouse Cheddar. It has a predominant smoky flavour with an exquisitely smooth, rich creaminess that melts in the mouth. Creamy yellow in colour, finished with a sprinkling of paprika.

· Ilchester Derby with Sage – Derby is one of England’s oldest and most famous cheeses. Finely chopped sage was added to this wonderful cheese as early as the 17th century, as it was thought to carry health benefits.

· Ilchester Mature Cheddar – Ilchester’s Cheddar comes from the West Country, close to where Cheddar originated in the Mendip Hills. Take a bite and let the creaminess melt into your mouth, with its earthy tangy notes.

· Ilchester Double Gloucester – This is a hard cheese with a savoury, mellow flavour. You may know it as the famous cheese that is rolled down Coopers Hill annually in May for the UK’s most extreme cheese race!

· Ilchester Red Leicester – Smooth and nutty! Add a splash of colour to your cheese board with this traditional English cheese, based on a classic Cheddar recipe.

· Ilchester Aged Red Leicester – This traditional English cheese has been carefully matured for a minimum of 9 months giving it a distinguishable smooth, tangy and nutty taste.

· Mexicana – This cheese combines a fiery mix of bell, jalapeño and chilli peppers, carefully blended with traditional British Cheddar and a secret mix of Mexican spices.

· Ilchester Vintage PDO Cheddar – Carefully matured, this cheddar is made in the West Country near the Mendip Hills. With a drier texture to standard cheddar due to the maturing process, there are sometimes crunchy calcium crystals.

The Cheese Calendar has proven to be a must have for the holiday season. Since its debut Christmas launch in 2017,  more than 700,000 Cheese Advent Calendars have been sold in 14 countries, and its become Amazon’s top 10 best selling Christmas gifts in 2019.

Speaking to FEMAIL Annem Hobson said: ‘Since I first made a handmade prototype, the Cheese Advent Calendar has reached goals I could only dream of!

‘From outselling chocolate at major retailers, to continuing to retail in more and more countries each year. The response from fans – many of whom have followed since day one – has been phenomenal.

‘I’m thrilled to launch a new and improved version of the Cheese Advent Calendar based on feedback from the loyal cheese-loving community!’ 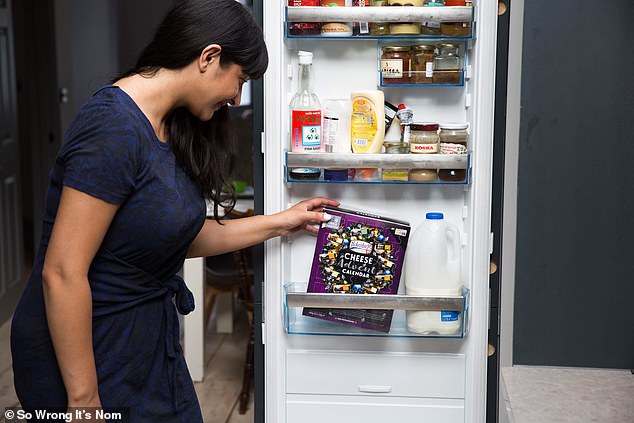 Food blogger Annem Hobson (pictured), 31, from London, who runs food blog So Wrong It’s Nom, created the UK’s first ever cheese advent in 2016, after getting frustrated at the lack of festive cheese offerings at the supermarkets 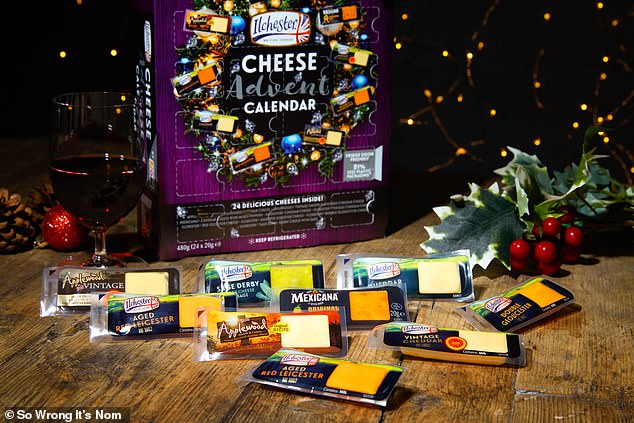 Calendar is due to retail at RRP £8 and will be available from Sainsbury’s, Lidl, Waitrose, Morrisons, Ocado, Booths, and Amazon UK from early November 2020.

The cheese advent calendar was born when Annem posted a blog in 2016 showing how anyone can make one at home.

After trending on Facebook for more than two days and garnering celebrity support from the likes of Emma Bunton and Zooey Deschanel, over 11,000 people signed up to give the campaign their support in four days alone. 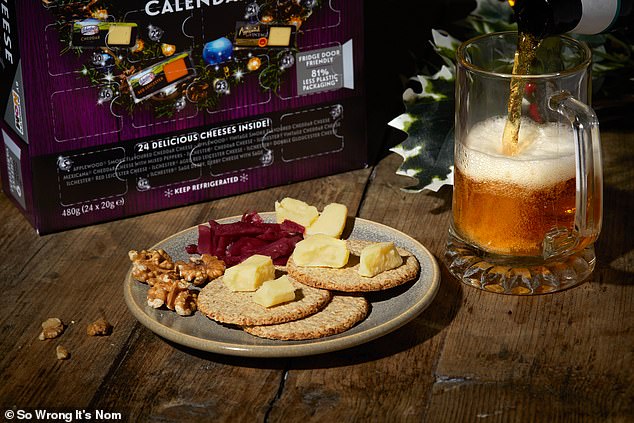 It was there that the trend of the Cheese Calendar was born, taking her idea from a small prototype and turning it into a global sensation that’s melted everyone’s hearts.

She officially launched the calendar three years ago and ASDA revealed that it was a bestseller year. This year the calendar has 24 doors nine different types of cheese.

Speaking last year, Annem told Femail: ‘I’m an independent food blogger, and came up with the idea for a Cheese Advent Calendar a few years ago. I wrote instructions on how people could DIY make their own after identifying a gap in the market.’

An insightful video also shows how Annem’s calendar was made – showing the big lumps off cheese coming off the conveyor belt and her trying them.

She went on to say: ‘With zero background in the cheese industry, I spent a year figuring out how to pitch dairies, retailers, find packaging companies, understand contracts and more.

‘I’m proud to say the Cheesemas dream came true, and last year Asda reported it was the number one best selling advent calendar across all categories, even outselling chocolate ones.