It had been a chance to jet-propel British women’s football into another stratosphere. It held out the prospect of a side from within these shore becoming the first to claim the women’s and men’s Champions League trophies in the same season. But Chelsea were dealt a brutal footballing lesson last night in a devastating first half which delivered Barcelona and Spain a first European title.

If there is a consolation to be found from a 45-minute period that left Emma Hayes’ players out-thought, out-muscled and gasping for air then it resides in the manager, who has made a quest of winning this trophy. Hayes has the energy, drive and intellect to ensure that this experience will be a defining one for her team. Sir Alex Ferguson, who beat Real Madrid to win the Cup Winners Cup with Aberdeen here, 38 years, always considered setbacks the most significant occasions.

Hayes could also not have legislated for the kind of night her forward Pernille Harder experienced, spurning four opportunities, including a shot levered over the bar at 1-0 which could have changed things. The course of the night could also have been different without the knee injury which deprived of right back Maren Mjelde. 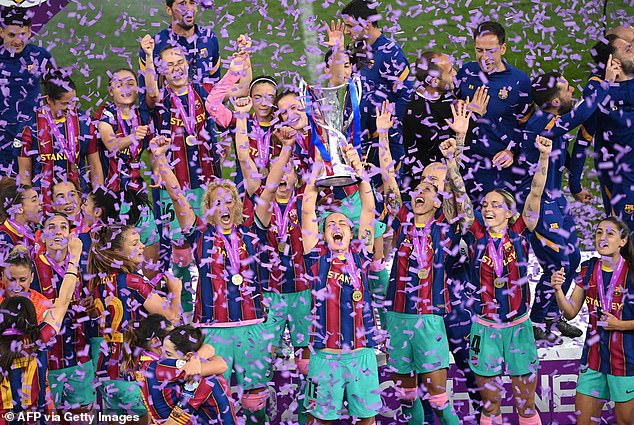 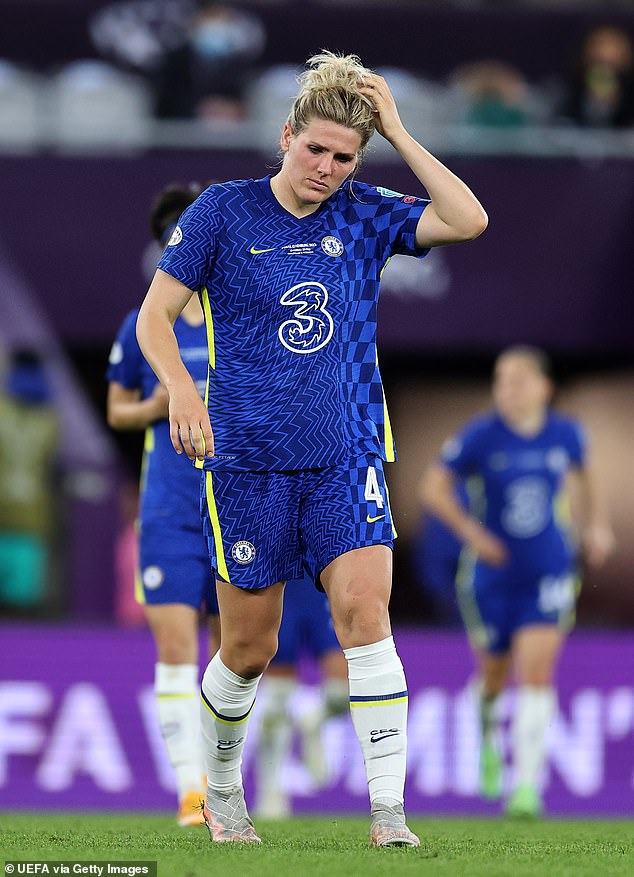 The manager reflected last night that the way her side had been outmuscled was not a reflection of their ability. ‘We are better than that, so to turn over like this in areas we had coached them not to do it [is hard to take],’ she said. ’To be bullied. We are better than that. The physicality on our league – we have that.’

But it was for good reason that the bookmakers favoured Barcelona. The club might have spent nothing last summer, while Chelsea were paying a world record fee for Harder, but they have built something very substantial. A club whose teams are all imbued with the Cruyff philosophy and which has made individual fitness programmes for players a priority ever since a 4-1 annihilation by Lyon in in the 2019 final underlined a physical deficit that they knew had to be matched. That final has haunted Barcelona ever since.

It was Chelsea who learned how the experience felt, last night. For the young full backs Niamh Charles and Jess Carter, who bore a terrible brunt in the punishing first half which left the team four goals in arrears, this will taking some recovering from.

Lieke Martens’ match up on the Spanish left against Charles, who had been outstanding in the semi-final, was a particularly brutal one. Across the pitch Carter, selected ahead of Jonna Andersson, was humbled by Caroline Graham Hansen, time and again.

In central midfield, there was also a big differential. Hayes side simply could not seize control. 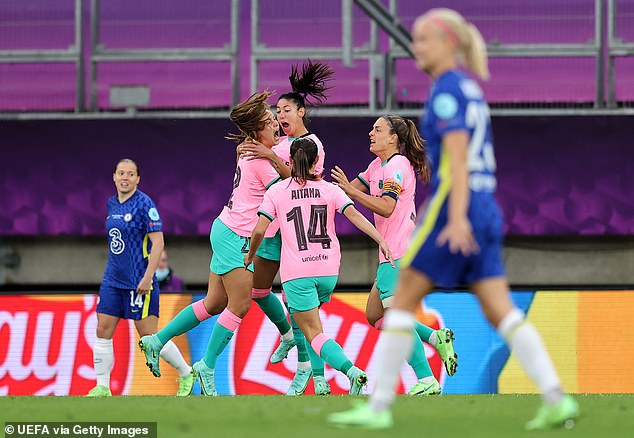 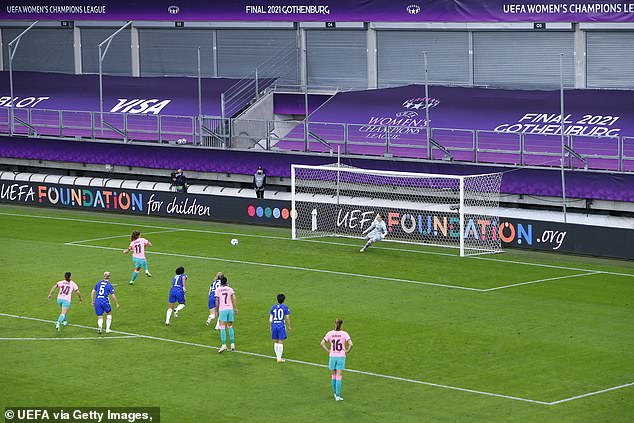 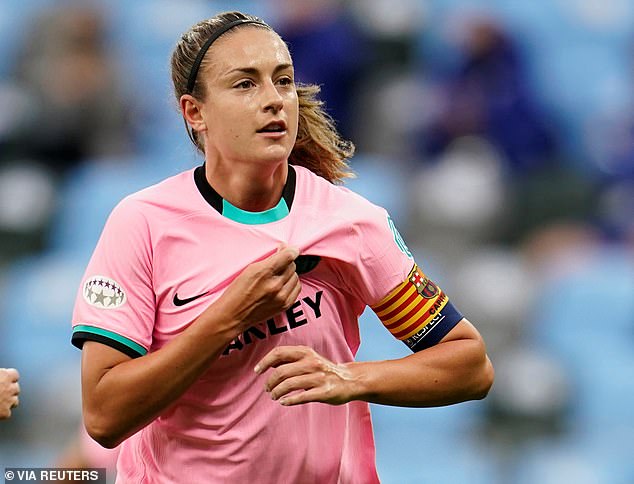 Barcelona tore out of the blocks in a way which left Chelsea reeling and unable to know what was hitting them. The game was a mere just 30 seconds old when Martens raced away from Charles and curled a shot against the bar. Chelsea were unable to organise themselves as the ball dropped and after a sequence of pinball football, the ball fell to Fran Kirby, whose attempted clearance ricocheted in of Melanie Leupolz.

It was misfortune and yet a grave premonition of the Spanish threat. Barcelona were simply quicker in action and thought. The defenders were simply unable to keep up with their crisp, precise exchanges of possession as they fell 3-0 behind inside an opening half hour which effectively killed the match.

Martens’ threat was particularly brutal. She exposed the high defensive position Mille Bright had taken on 14 minutes and raced into the Chelsea third, despatching Caroline Graham Hansen who barged through the threat of Jess Carter. The Norwegian induced more panic by cutting back to Jenni Hermoso, who was caught by Leupolz’s standing leg to secure the penalty that captain Alexia Putellas dinked in. 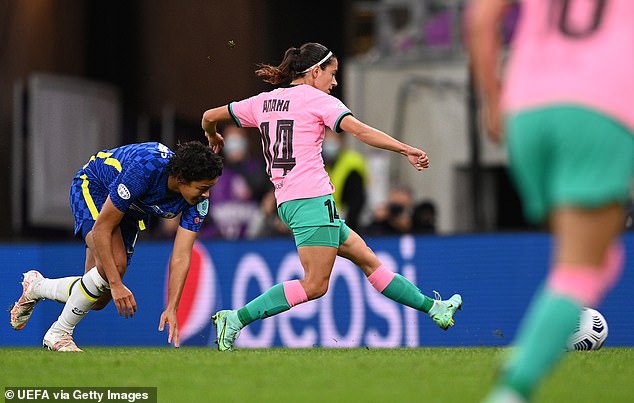 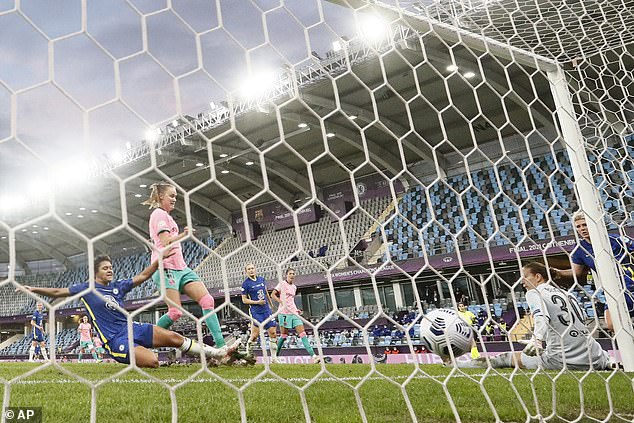 Hayes felt that the fluke nature of the opening eight minutes had to be compensated for. ‘One’s an own-goal and the second is a penalty and from there it was an uphill battle,’ she said. ‘It makes it difficult to impose yourself when the other team has the momentum of being 2-0 up inside [14] minutes.’

But Martens demonstrated her superiority again for the third, racing towards the byline to trigger a one-touch goal of quite beautiful geometry. Hermoso eased a pass back for Putellas, whose precision fist-time ball, punched through the lines, found the darting move of Aitana Bonmati who drew Ann-Katrin Berger and rolled the ball in through her legs.

Martens outmuscled Charles again for the fourth, cutting back from the byline for Graham Hansen who was faster to the ball to Charles to poke in. 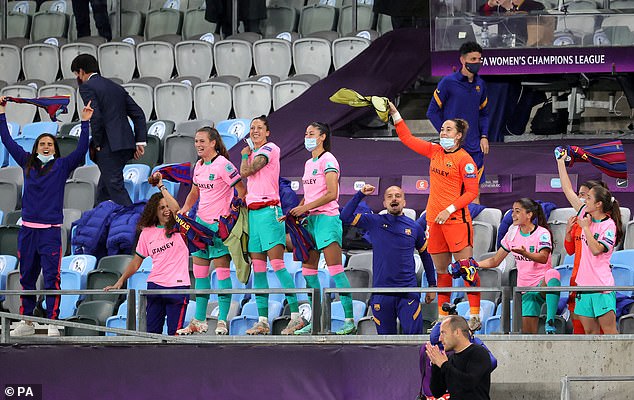 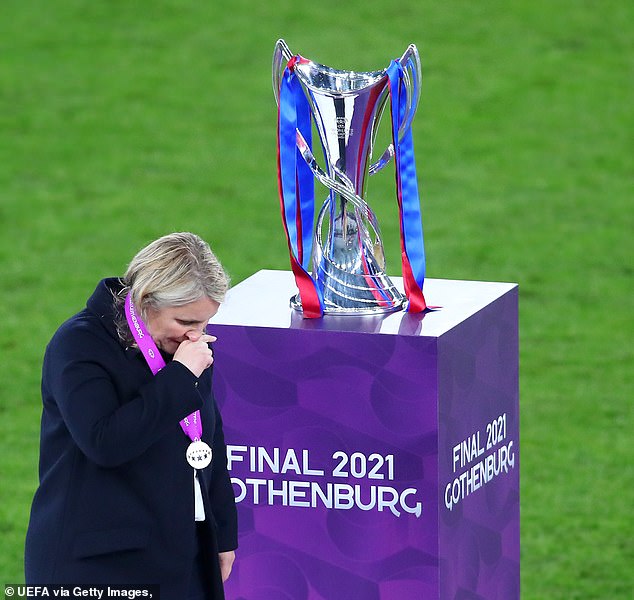 This was the same ‘carousel’ that left Ferguson looking so lost after his Manchester United side’s defeat to Pep Guardiola’s Barcelona at Wembley, ten years ago this month. Hayes options were limited. Guro Reiten, who arrived for Leupolz after the break, provide support to quell Martens. Charles recovered her poise and Chelsea showed signs of a recovery. But Harder somehow managed to spurn another chance after Reiten’s free kick presented an elementary header. A damage limitation exercise was the best if could be.

‘We are the second best team in Europe,’ Hayes reflected last night. ‘Most of those players have played on that stage before and those young players are only going to get better.’ She will recover and mount a new assault on Europe, though it will require some time to take all this in.