Cherie Blair says it will be ‘tough’ for Boris Johnson and Carrie to bring up baby Wilfred at No.11

Cherie Blair says it’ll be ‘tough’ for Boris Johnson and Carrie Symonds to raise baby Wilfred at No.11 because being PM is a ’24/7 job’ that takes time away from the family and there’s ‘no privacy’

Cherie Blair has said it will be ‘tough’ for Boris Johnson and Carrie Symonds to bring up their five-month-old son Wilfred in Downing Street because being Prime Minister is a ’24-hour job’ and there’s ‘no privacy’.

The barrister, 66, who had her youngest son Leo, now aged 20, three years into her husband Tony’s first term in office as Prime Minister in 2000, was speaking on Times Radio to presenter Matt Chorley on Monday.

She and Tony lived with Leo and their three other children Euan, now 36, Nicholas, 35, and Kathryn, 32, in the ‘rather large’ four-bed flat above No. 11 during their time in Downing Street because the No. 10 flat was too small for the family.

The Camerons followed suit and remained at No.11. Mr Johnson and Carrie are now living at the grace-and-favour apartment with Wilfred, who was born during lockdown. Cherie Blair has said it will be ‘tough’ for Boris Johnson and Carrie Symonds to bring up their son Wilfred in Downing Street because being Prime Minister is a ’24-hour job’ and there’s ‘no privacy’. Pictured, Mr Johnson and Miss Symonds with Wilfred in the study at No.10 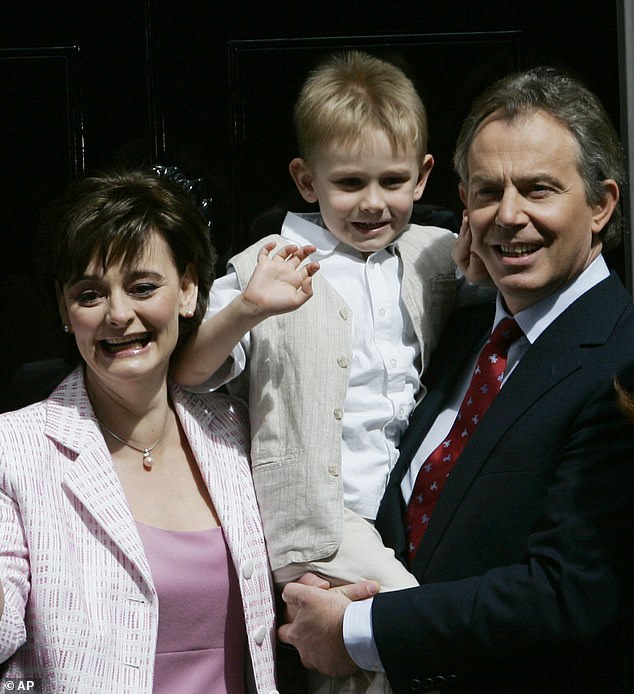 Cherie and Tony lived with youngest son Leo (pictured in 2005) and their three other children Euan, Nicholas, and Kathryn, in the ‘rather large’ four-bed flat above No. 11 during their time in Downing Street because the No. 10 flat was too small for the family.

Speaking on the programme, Mrs Blair said: ‘It is a not a small place to live because we moved. The original No. 10 Downing Street flat was a small place to live and it wasn’t big enough for Tony and I and our three children and of course we had a nanny to help us because I was a working mother.

‘But the flat in No.11 11 is actually a rather large house, so I don’t think it is a question of space.

‘However, I would say that it is tough bringing up children in Downing Street because being the Prime Minister is a 24-hour job anyway, and at the moment these two huge issues, which is the virus and Brexit, it is an all-consuming job so that is… but you take on the job as Prime Minister knowing that.’

Mrs Blair added the family had little time to themselves. 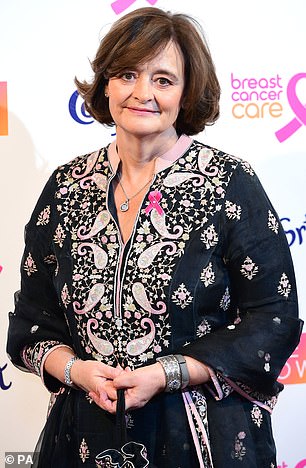 ‘We used to have people coming in and out of the Downing Street accommodation at all times of the day,’ she continued. ‘Privacy is not a thing you can rely on.

‘It does change the dynamic of a group because I can remember the Downing Street switchboard would ring up and say, “the PM is going to come up at 7pm, can you make sure you have the baby ready and his dinner ready” because of course there’s no food made for you in Downing Street. That is expected to be done by the family.

‘And you do that and everything would be ready and then he wouldn’t come and it would be 8pm and the baby would be fractious and would have gone to bed and he would come in and the dinner would be ruined and you would want to say, “where have you been?”

‘And then he’d say, “I’m really sorry, I’ve just been talking to the president of America”. That is probably more important. It is a great excuse.’

She then added, ‘It has taken a long time to get Tony to realise that he can’t carry on using that excuse!’

In June, Mr Blair revealed he has not done housework, laundry, or cooked a family meal since 1997. He claimed it was ‘impossible’ to return to ordinary life after leaving office.

But Cherie told Chorley that Mr Blair has ‘expressed an interest’ in cooking.

‘I’m afraid housework and cooking has never been high on his agenda unfortunately, although he did express an interest in cooking and has made several omelettes now,’ she said.

‘He has opened the cookbook and loves looking at the pictures but actually getting the pans down and doing the cooking, we are still baby steps towards that.’

Mr Johnson is only the fourth Prime Minister to welcome a baby into Downing Street.