Chicago mayor Lori Lightfoot is now on the receiving end of a lawsuit following backlash for her declaration that she would only give interviews to journalists of color.

Lightfoot, who assumed office in May 2019, announced last Tuesday that she would only grant one-on-one interviews to ‘black and brown’ reporters to mark her two-year anniversary in office.

Her announcement about the policy, which she eventually called temporary, sparked anger from reporters of all colors, but Lightfoot doubled down on her decision the next day, insisting it was part of her lifelong battle for diversity and inclusion. 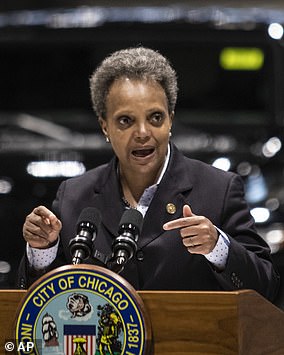 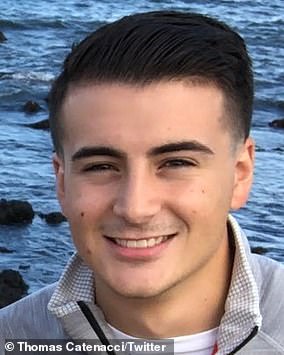 In late May, Lightfoot (left) stated she would only give give one-on-one interviews to ‘black and brown’ journalists on a temporary basis. She is now being sued by Thomas Catenacci (right), a white reporter from the Daily Caller who alleges he was denied an interview

In late May, however, the backlash hit a new level, with a white reporter from the Daily Caller suing Lightfoot in the United States District Court for the Northern District of Illinois.

Lightfoot called the lawsuit ‘frivolous.’ She is Chicago’s first black female and first openly gay mayor, announced last month that she would only speak with reporters of color to mark her two-year anniversary in office.

The lawsuit, filed by Daily Caller News Foundation and Judicial Watch, alleges that Thomas Catenacci was denied an interview by Lightfoot.

Catenacci sent three emails to Lightfoot’s office asking for an interview beginning on March 20, according to the lawsuit, none of which received a response.

The lawsuit says ‘failing to respond in a timely manner’ to the interview requests was akin to a denial.

While it doesn’t specify whether Lightfoot is being sued for damages, it does include request for a jury trial.

Catenacci was hoping to speak to her about Chicago’s battle against COVID-19 and the vaccination effort in the city. 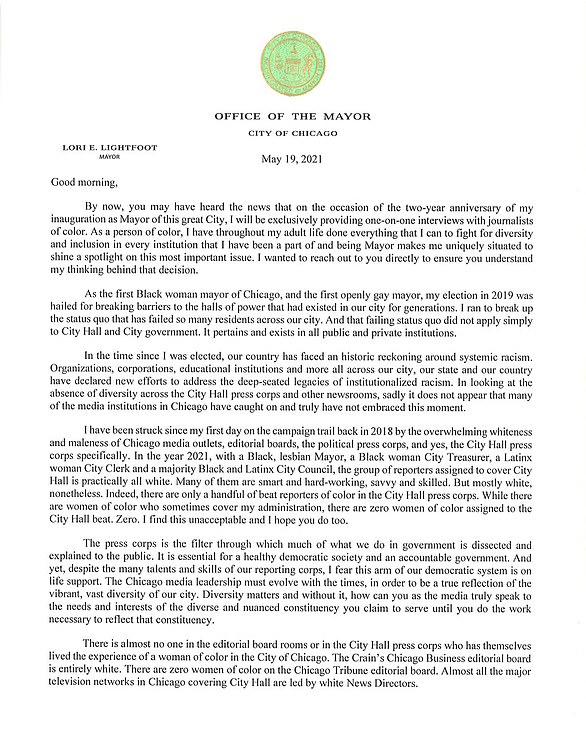 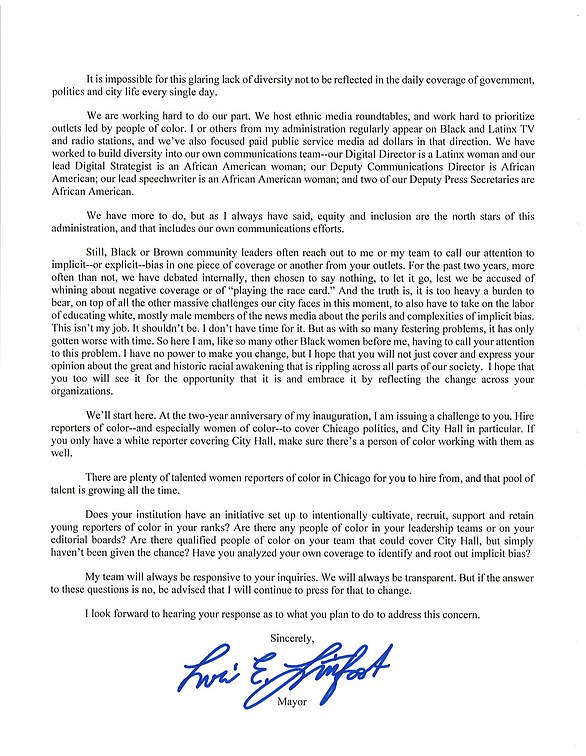 In an open letter last week, Lightfoot detailed her decision to exclusively provide interviews with journalists of color, claiming it is part of a ‘fight for diversity and inclusion’

‘It’s absurd that an elected official believes she can discriminate on the basis of race,’ DCNF Editor-in-Chief Ethan Barton said in the Daily Caller. ‘Mayor Lightfoot’s decision is clearly blocking press freedom through racial discrimination.’

Tom Fitton, the president of Judicial Watch, also commented on the lawsuit.

‘Racial discrimination has no place in America, especially in the halls of government,’ Fitton said.

Catenacci, meanwhile, says that he aims to hold Lightfoot ‘accountable.’

‘Preventing journalists from doing our jobs in such a blatantly discriminatory way is wrong and does a disservice to our readers who come from all backgrounds,’ Catenacci said.

‘Every journalist and every person who consumes the news should be concerned by Mayor Lightfoot’s actions,’ he continued.

The reporter also tweeted about the lawsuit on Thursday morning.

The lawsuit is arguably the most significant backlash since Lightfoot issued her open letter last week after news came out about her decree.

‘I have been struck since my first day on the campaign trail back in 2018 by the overwhelming whiteness and maleness of Chicago media outlets, editorial boards, the political press corps, and yes, the City Hall press corps specifically,’ Lightfoot wrote.

She called it ‘unacceptable’ that reporters covering City Hall were mostly white.

‘Many of them are smart and hard-working, savvy and skilled. But mostly white, nonetheless,’ she wrote.

Lightfoot later confirmed in a series of tweets that she was purposefully ‘prioritizing media requests from POC reporters’ and that it was a ‘shame’ the journalists assigned to cover Chicago’s City Hall in 2021 were overwhelmingly white. 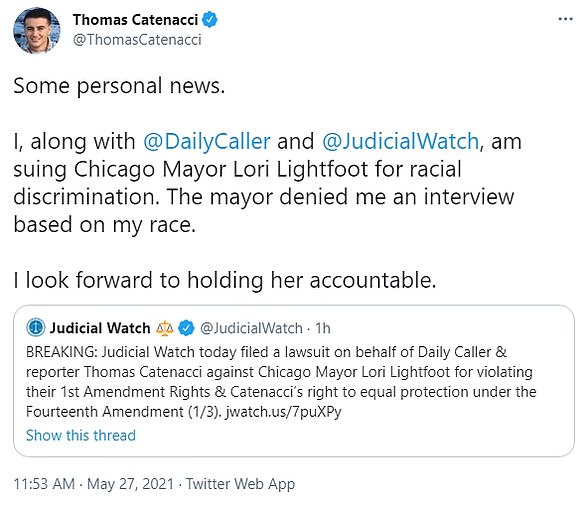 ‘I ran to break up the status quo that was failing so many. That isn’t just in City Hall. It’s a shame that in 2021, the City Hall press corps is overwhelmingly white in a city where more than half of the city identifies as black, Latino, AAPI or Native American,’ she tweeted.

She added, ‘Diversity and inclusion is imperative across all institutions including media. In order to progress we must change.

‘This is exactly why I’m being intentional about prioritizing media requests from POC reporters on the occasion of the two-year anniversary of my inauguration as mayor of this great city.

‘This is an imbalance that needs to change. Chicago is a world-class city. Our local media should reflect the multiple cultures that comprise it. We must be intentional about doing better. I believed that when running for office. I stand on this belief now. It’s time for the newsrooms to do better and build teams that reflect the make-up of our city.’

On his program last Wednesday night, Tucker Carlson described the mayor of Chicago as a Nazi and ‘a monster.’

‘To Lori Lightfoot, all that matters is the fact they’re white because white people are the same. They are entirely defined by the color of their skin,’ Carlson told his Fox News audience.

‘Lori Lightfoot is a monster. Any society that allows politicians to talk like this has a very ugly future ahead. Very ugly.’

‘The reason why she gets away with it is because she is black and she got that ‘D’ in front of her name.

Gregory Pratt, a Chicago Tribune reporter who is Latino, revealed he was among those who had been granted an interview but the newspaper canceled it when Lightfoot refused to lift her ban on other reporters.

‘I am a Latino reporter @chicagotribune whose interview request was granted for today. However, I asked the mayor’s office to lift its condition on others and when they said no, we respectfully canceled,’ Pratt tweeted.

‘Politicians don’t get to choose who covers them.’

Keeanga-Yamahtta Taylor, a Pulitzer Prize finalist and contributing writer for the New Yorker magazine and the New York Times, suggested the move was a way to draw attention from the mayor’s failures.

‘Such astonishing mastery of deflection and distraction … always hiding from her disastrous record of boldly upholding the status quo in Chicago,’ Taylor, who also is a professor at Princeton University, tweeted.