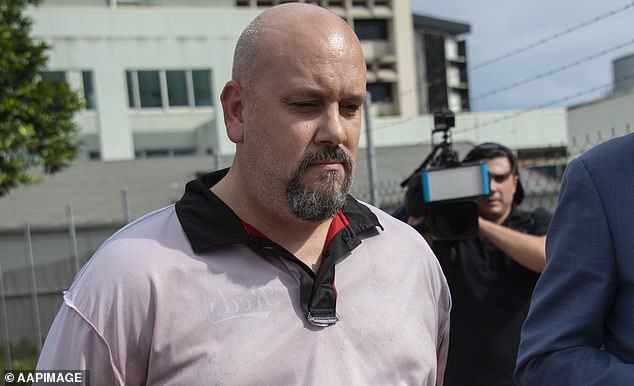 A former childcare worker has been sentenced to six years jail for the manslaughter of a three-year-old boy found on a school bus in Cairns, north Queensland.

Michael Glenn Lewis was handed down the sentence on Wednesday and will be eligible for parole in 18 months.

Maliq Nicholas Floyd Namok-Malamoo, known as Meeky, was found still strapped in a baby car seat after being left on a minibus at Goodstart Early Learning in Edmonton, near Cairns, on a hot day last February.

Maliq Nicholas Floyd Namok-Malamoo, known as Meeky, was found still strapped in a baby car seat on a minibus at Goodstart Early Learning in Edmonton, near Cairns.

Bus driver and manager Lewis, 45, and Goodstart employee Dionne Batrice Grills, 34, were charged with manslaughter over the toddler’s death.

Ms Grills appeared in Cairns Courthouse in January where her manslaughter charge was dropped after Magistrate Kevin Priestly found she did not have duty of care for the child.

Mr Priestly said a reasonable jury would not find her guilty based on the evidence as there ‘was a possibility and probability’ she left the bus first, leaving duty of care to Mr Lewis.

Police had alleged the pair collected Meeky and brought him to the centre earlier in the day but didn’t bring him inside with them.

He then allegedly said: ‘I thought I’d done the headcounts. I have had meetings all day. I thought there was a funny smell in the car when I was driving to the school’.

Ambulance officer James Andrews claimed Mr Lewis repeatedly said his life would be ‘over,’ and expressed sadness that his ‘best mate’ had died.

More than 500 mourners farewelled Meeky at his funeral two weeks after the tragedy.

A national child care provider, Goodstart reviewed its procedures and introduced a national compulsory refresher training for staff in the wake of the tragedy.

Goodstart Early Learning overhauled its procedures in the wake of the tragedy in Cairns.

It led to new designated roles in the bus system; where staff members were assigned to be a driver, supervisor or checker.

Each have their own roles and duties to make sure kids get on and off the bus safely with the supervisor responsible for making sure no children are left on the bus before getting off.

The checker is responsible for inspecting the bus after it returns to the centre, then double-check the attendance roll and check off children.

Meeky’s lifeless body was found in the child care minibus (pictured), almost six hours after he was allegedly collected from his home last February

8.30am: The boy’s mother calls to ask if he can be picked up, as he was not collected on the initial morning run.

9.15am: Lewis and his colleague Dionne Batrice Grills collect the boy from his home on the mini bus.

9.33am: The bus pulls into the daycare car park, but the boy – who is strapped into a baby seat, two seats away from the front door – never gets off, despite being clearly visible.

**During the day the temperature rises to 36C in Cairns.

2.45pm: The bus leaves for the afternoon run, with the boy still in his seat.

3pm: Lewis makes a desperate call to Triple-0, telling the operator: ‘Oh my God, this kid is dead’