Dozens of people – including 12 children – have burned to death after a bus caught fire on a motorway in Bulgaria.

At least 45 people were killed when the coach, thought to be full of North Macedonian tourists returning from a trip to Turkey, hit crash barriers and burst into flames around 2am on Tuesday. It was later confirmed by North Macedonia’s Prime Minister that one victim has Serbian, and another had Belgium citizenship.

Seven people were pulled alive from the wreck, including a 16-year-old girl, and have been taken to hospital in the capital of Sofia with non-life-threatening injuries.

Interior Minister Boyko Rashkov, who visited the scene in the early hours, said the bodies of the dead were ‘completely burned out’ by the intensity of the fire. 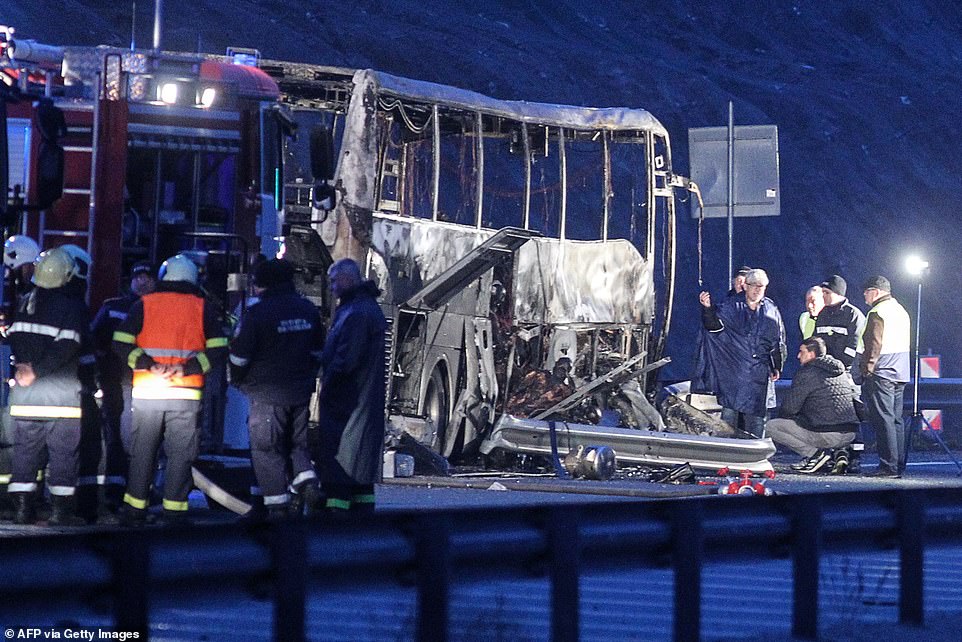 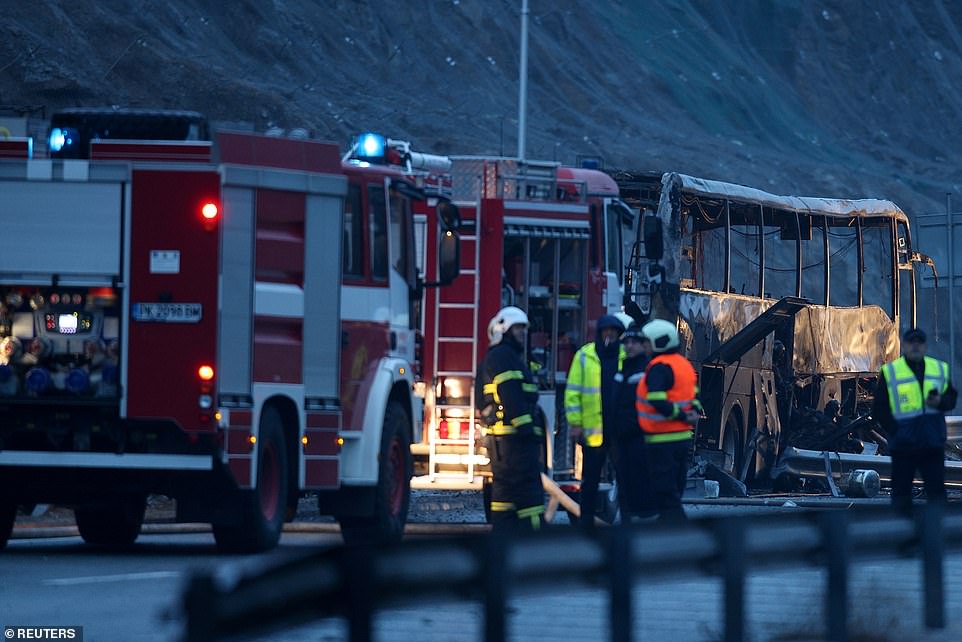 The bus, which was carrying mostly tourists from North Macedonia, either crashed and caught fire, or caught fire and then crashed on Struma highway around 26 miles west of Sofia at 2am, according to Mr Nikolov 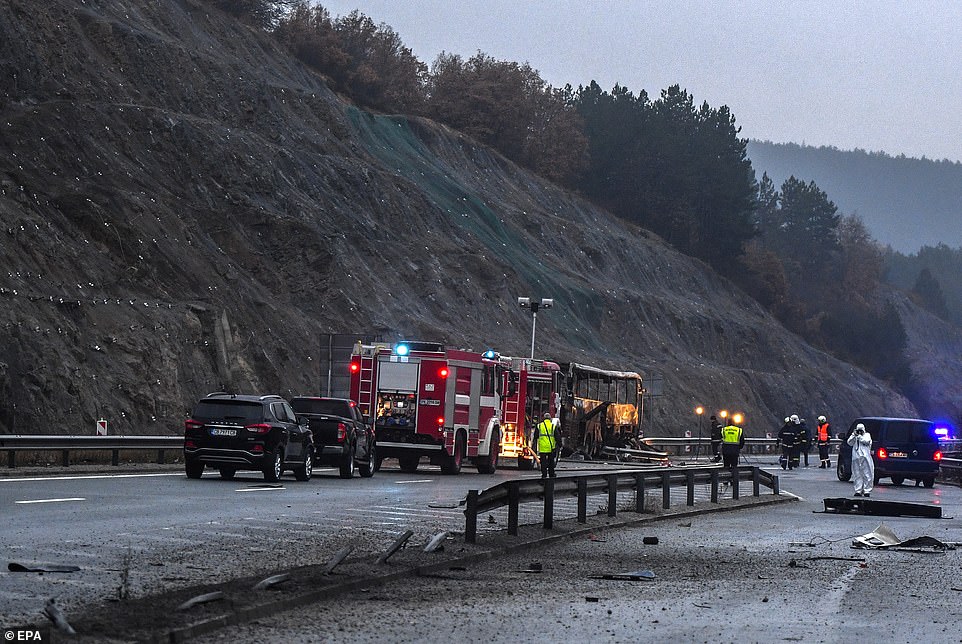 Seven people were pulled alive from the wreck (pictured as officials work at the scene in Bulgaia), including a 16-year-old girl, and have been taken to hospital in the capital of Sofia with non-life-threatening injuries. 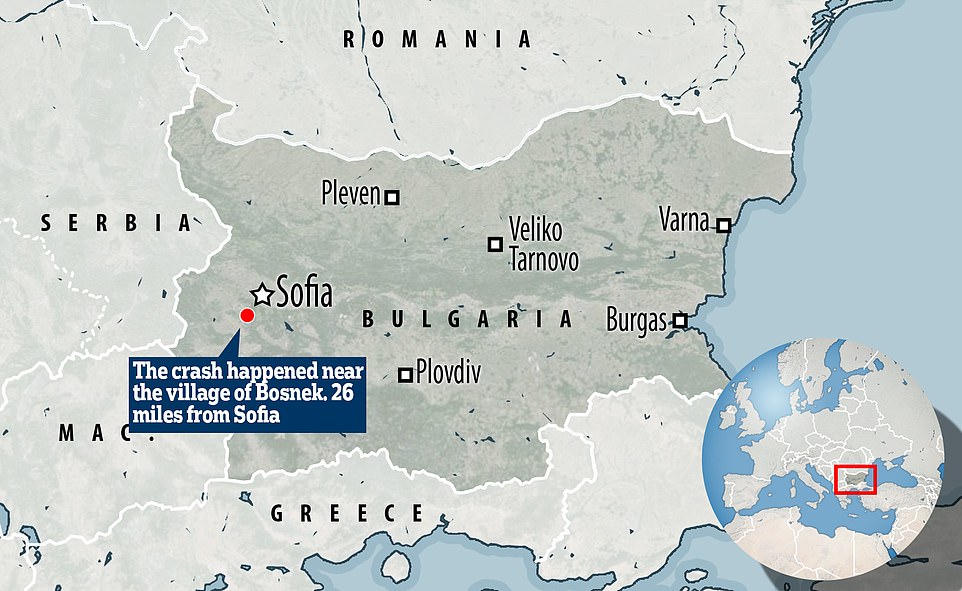 ‘Of the victims … 12 in total were under the age of 18,’ national police chief Stanimir Stanev said.

He told bTV television that 45 of the 52 people on the bus were killed.

‘The driver died immediately so there was no one able to open the doors,’ he added.

They were taken to a hospital in the capital with serious burns, he added.

According to bTV, the bus was travelling from Turkey’s main city of Istanbul to Skopje in North Macedonia.

There were no other vehicles involved in the accident, which occurred around 2:00 am (0000 GMT) on a highway about 26 miles from Sofia, near the village of Bosnek.

Local media in Macedonia report that the bus was registered to the ‘Besa trans’ tourist agency, which organises touristic and shopping tours to Istanbul.

North Macedonian Prime Minister Zoran Zaev initially said the victims were probably fellow Macedonians, but later announced that they included one person from Serbia, and one with Belgium citizenship.

‘We don’t know if all the victims are from North Macedonia, but we assume so because the bus is registered in the country,’ he said in an interview with Nova TV.

He told state news agency MIA that he had spoken to one survivor.

‘He explained that they were sleeping in the bus when an explosion was heard. They succeeded to brake one of the windows and save few people. Unfortunately, the rest did not succeed,’ he said.

‘It is great tragedy… 12 (victims) are under 18 years old, and the rest are young people about 20 to 30 years old. Most of them are our citizens, but there are (some) from Serbia too,’ he added. 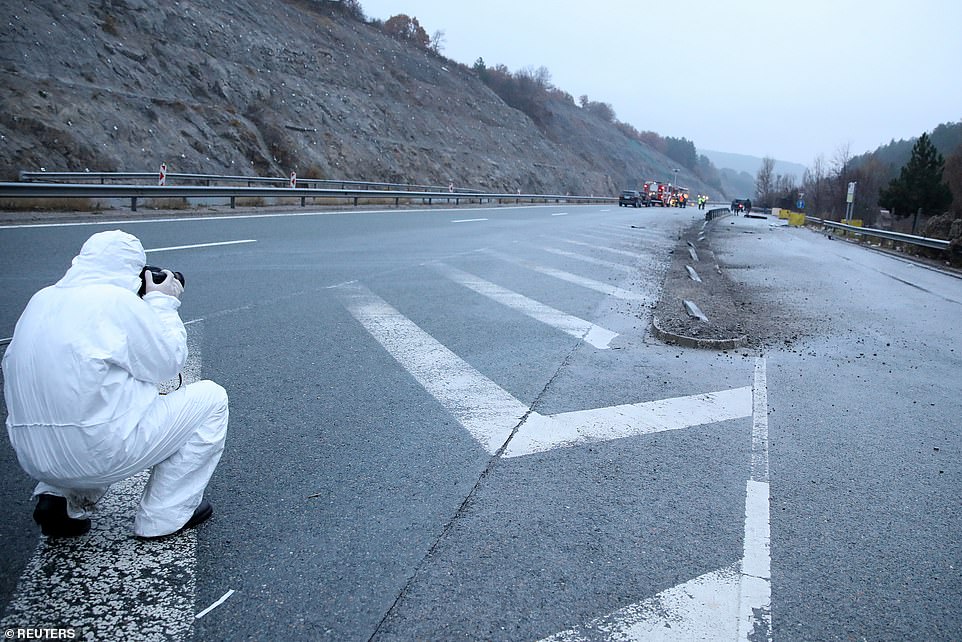 The site has been sealed off and Bulgarian interim Prime Minister Stefan Yanev rushed to the scene of the tragedy. Pictured, investigations into the crash have begun 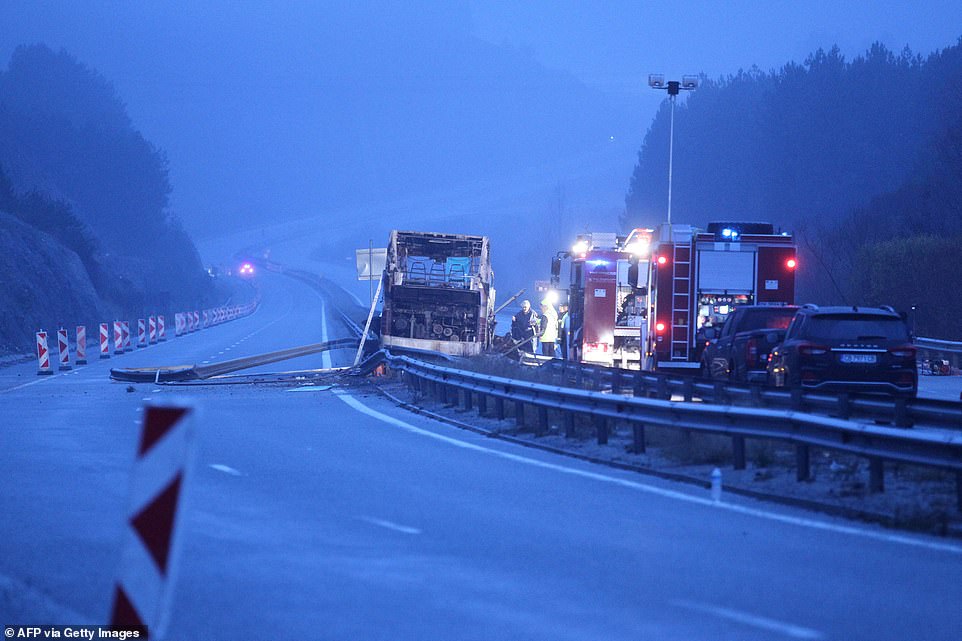 Officials work at the site of a bus accident, in which at least 45 people were killed, on a highway near the village of Bosnek, south of Sofia, on November 23, 2021 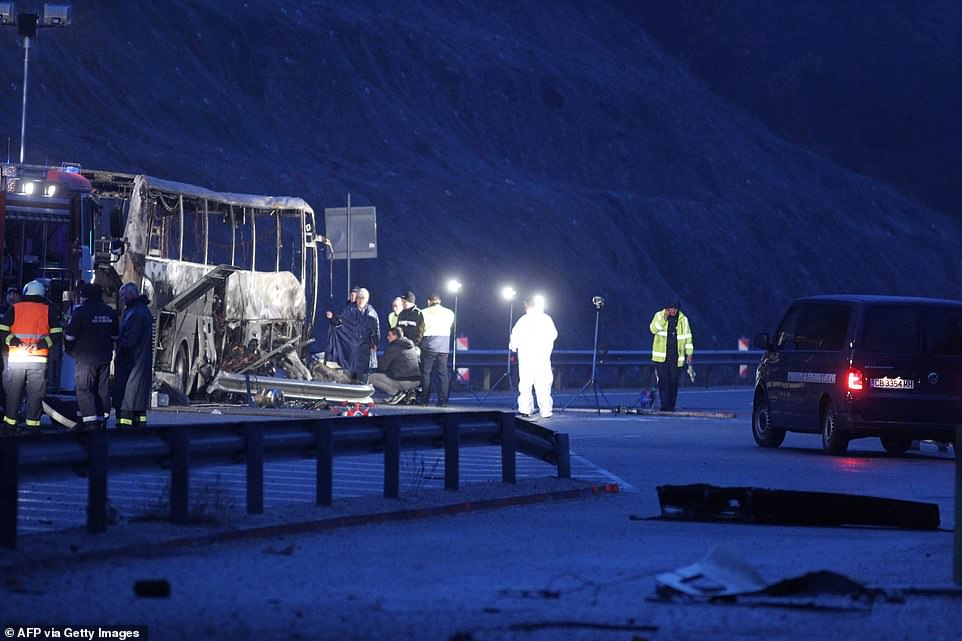 Pictured: Forensic investigators and other officials work at the site of a bus accident, in which at least 45 people were killed, on a highway near the village of Bosnek, south of Sofia, on November 23, 2021

But police chief Stanev said while the two drivers of the bus were Macedonian, the passengers were Albanian.

‘Initial information shows that 52 people were travelling in the bus, including two drivers with Macedonian nationality and 50 passengers with Albanian nationality,’ he said.

All seven – two women and five men – are from the same family, he said after visiting the survivors in the Sofia hospital where they were being treated for serious burns.

Survivors ‘jumped out of the windows’, said Maya Arguirova, head of the treatment centre for severe burns where they were transported.

Images showed the carcass of the totally burned out bus, having broken through the guardrails between the two sides of the highway.

Bulgaria’s interim Prime Minister Stefan Yanev and Interior Minister Boyko Rashkov rushed to the site of the crash Tuesday morning, while local media said that the North Macedonian and Albanian premiers were also on their way.

‘It’s a terrifying picture in there. I haven’t seen anything like that before,’ Rashkov told journalists at the site.

‘Nobody can say for certain how many are there and who they were. The bodies are badly burned and have to be identified one by one,’ he added.

Bulgaria has a history of deadly bus accidents. Seventeen Bulgarian tourists died in 2018 when their bus skidded on a wet road and overturned.

A total of 628 people died in road accidents in 2019 and 463 in 2020 in the country of 6.9 million people, according to official data. The accidents were often attributed to poor road conditions, outdated cars and speeding.

Tuesday’s accident happened on a section of highway with steep gradients and without clear demarcation lines, where many accidents have taken place, according to Diana Roussinova of a road safety NGO, which has complained to authorities about the stretch in the past.

These 4 Metaverse Gems May Follow the Suit of MANA and SAND To Go 100x! – Coinpedia – Fintech & Cryptocurreny News Media 2021

These 4 Metaverse Gems May Follow the Suit of MANA and SAND To Go 100x! - Coinpedia - Fintech & Cryptocurreny News Media 2021