China’s Foreign Ministry has said it was not aware of the controversy surrounding tennis professional Peng Shuai, who disappeared after accusing a former top official of sexually abusing her.

Ministry spokesperson Zhao Lijian told reporters that the matter was ‘not a diplomatic question and I’m not aware of the situation’.

The ministry has consistently disavowed knowledge of the issue since it broke as a major global story earlier this week.

Despite this, international pressure has been growing to uncover the truth about Peng’s whereabouts, with 23-time Grand Slam champion Serena Williams, 40, urging an investigation to be launched. 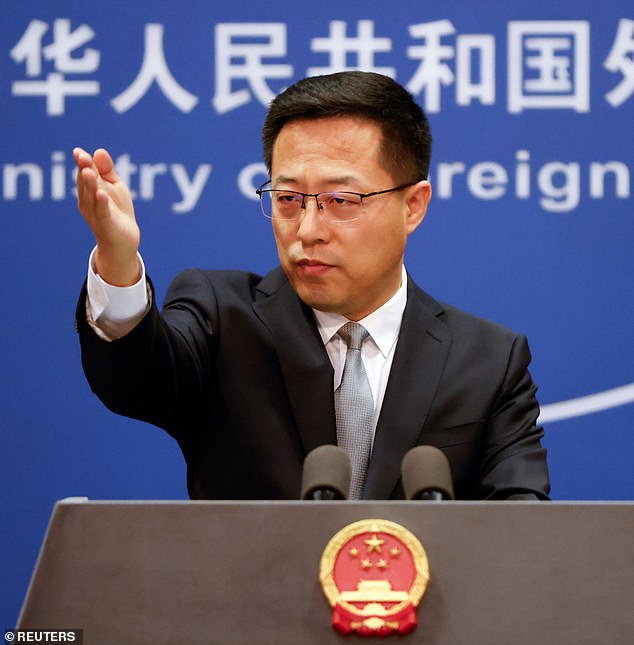 Chinese Foreign Ministry spokesperson Zhao Lijian (pictured, on November 16) told reporters that the controversy surrounding the disappearance of tennis professional Peng Shuai was ‘not a diplomatic question and I’m not aware of the situation’ 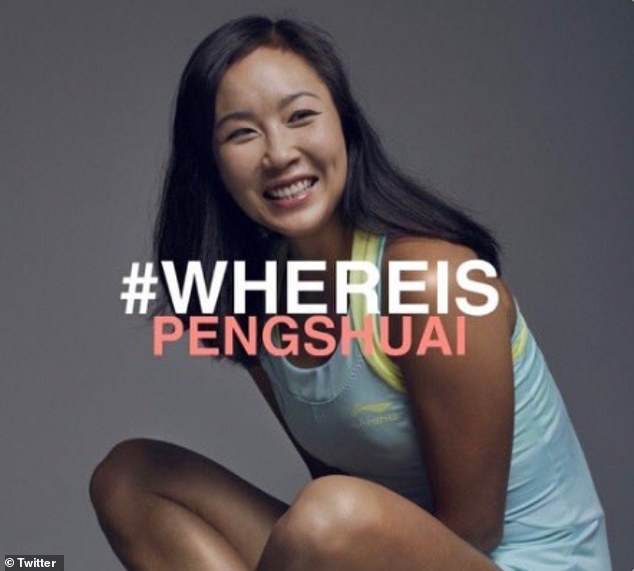 Earlier this week, 23-time Grand Slam champion Serena Williams, 40, shared this image on Twitter as she urged an investigation to be launched into Peng’s disappearance

She also participated in three Olympics, making her disappearance all the more prominent with Beijing set to host the Winter Games starting on February 4.

Peng wrote in a lengthy social media post on November 2 that she had been forced to have sex despite repeated refusals three years ago with Zhang Gaoli, a former vice premier and member of the ruling Communist Party’s all-powerful Politburo Standing Committee.

The post was quickly deleted from her verified account on Weibo, a leading Chinese social media platform, but screenshots of the explosive accusation quickly spread across China’s internet.

And today, the Women’s Tennis Association has said it is prepared to pull its tournament out of China if they were not satisfied with the response to her sexual assault allegation.

‘We’re definitely willing to pull our business and deal with all the complications that come with it,’ he told CNN in an interview.

‘Because this is certainly, this is bigger than the business. Women need to be respected and not censored.’

And Steve Simon, the chairman and chief executive of the Women’s Tennis Association, questioned the authenticity of what Chinese state media said was an email intended for him in which Peng said she was safe and that the assault allegation was untrue.

It was posted on Thursday by CGTN, the international arm of Chinese state broadcaster CCTV.

The email published said: ‘Hello everyone this is Peng Shuai,

‘Regarding the recent news released on the official website of the WTA, the content has not been confirmed or verified by myself and it was released without my consent. 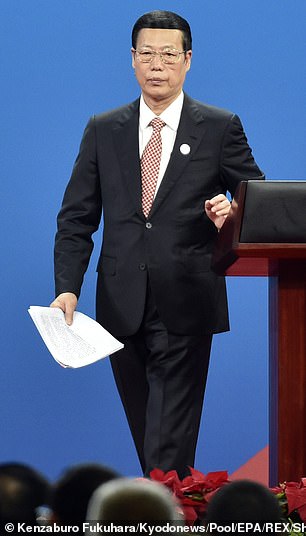 Peng claimed to have been involved in a ten-year affair with Zhang Gaoli (pictured), saying he sexually assaulted her in 2018

‘The news in that release, including the allegation of sexual assault, is not true. I’m not missing, nor am I unsafe. I’ve just been resting at home and everything is fine.

‘Thank you again for caring about me.

‘If the WTA publishes any more news about me, please verify it with me, and release it with my consent. As a professional tennis player, I think you all for your companionship and consideration.

‘Once again, thank you for your consideration.’

Social media users were quick to point out oddities with the email, including that Peng opens ‘hello everyone’ even though it was allegedly a private correspondence addressed to Simon.

They also pointed out that a typing cursor appears in the middle of one of the sentences, suggesting the ’email’ is actually a screenshot taken directly from a document that is open in a word processor.

Advocacy group Chinese Human Rights Defenders added that the email ‘should not be taken at face value’, and that the Chinese state has a history of arbitrarily detaining people who implicate the government or its officials in wrongdoing.

Meanwhile, the International Olympic Committee (IOC) said it would not comment on the matter.

A spokesperson for the body said: ‘Experience shows that quiet diplomacy offers the best opportunity to find a solution for questions of such nature. This explains why the IOC will not comment any further at this stage.’

And on Wednesday, fellow tennis star Serena Williams called for an investigation into Peng’s disappearance to be launched.

She wrote: ‘I am devastated and shocked to hear about the news of my peer, Peng Shuai. I hope she is safe and found as soon as possible. 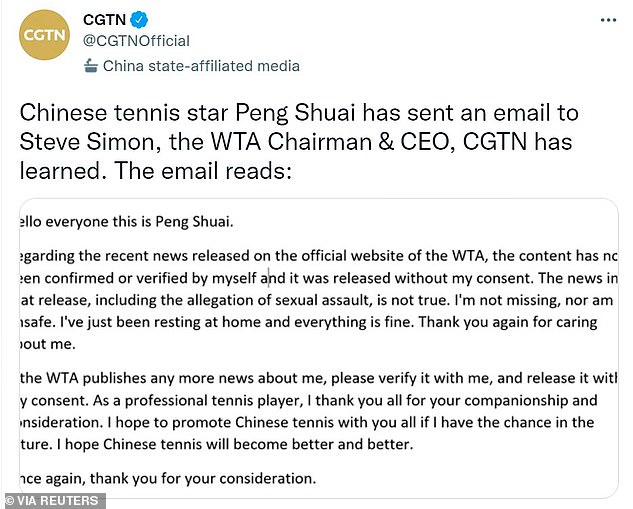 Social media users were quick to point out oddities with the ’email’, including that it is addressed to ‘everyone’ despite allegedly being a private message and that a typing cursor appears to be flashing in the middle of the message – suggesting it is open in a word processor

‘This must be investigated and we must not stay silent. Sending love to her and her family during this incredibly difficult time.’

Hu Xijin, a well-connected Chinese state media editor, weighed in on the scandal on Twitter early on Friday, saying he did not believe she had been the target of retribution.

‘As a person who is familiar with Chinese system, I don’t believe Peng Shuai has received retaliation and repression speculated by foreign media for the thing people talked about,’ said Hu, the editor of the Global Times, on Twitter.

The Global Times is published by the ruling Communist Party’s official People’s Daily, and Hu has an active presence on Twitter, which is blocked in China. He did not make any similar comment on his official account on Weibo, China’s equivalent of Twitter.

U.S. Representative Jim Banks of Indiana said he has written to President Joe Biden about Peng’s disappearance, urging him to raise her case with China and to warn Beijing it could have a negative impact on the Winter Olympics. 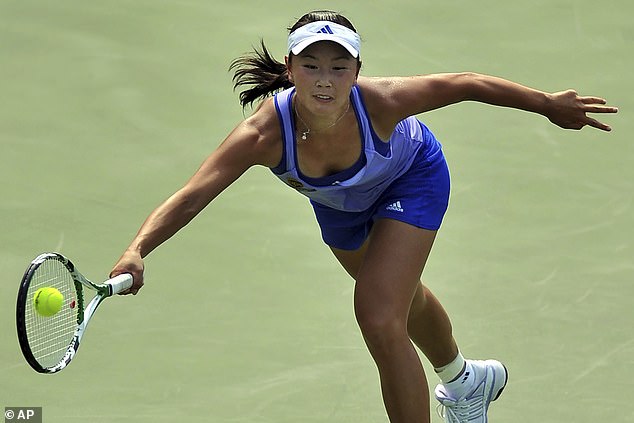 By Friday, the hashtag #WhereIsPengShuai had racked up over 32 million mentions on Facebook’s (FB.O) Instagram, which is also blocked in China, as well as Twitter, according to hashtag analysis website BrandMentions.

In contrast, the topic remains heavily censored in China’s tightly controlled cyberspace. As of Friday, searches for the WTA’s official account on Weibo yielded no results although its account remained available. Peng’s name on Weibo also continues to yield no search results.

China has been the focus of the WTA’s most aggressive expansion over the last decade and hosted nine tournaments in the 2019 season with a total $30.4 million prize money on offer.

The season-ending WTA Finals had a prize purse of $14 million in 2019 when it was played in Shenzhen for the first time.

The Finals were cancelled last year due to the COVID-19 pandemic and moved this year to Guadalajara, Mexico, but the WTA has said it will return to Shenzhen from 2022 until 2030.

What we know about 'DisneylandForward': Disney starting plans with city for possible new development