Chinese media: The “Sinopharm” vaccine will be available in the Chinese market within a week 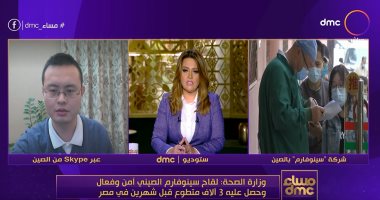 Nader Rong, the Chinese media, said, during an intervention via the Skype feature of the dmc evening program, presented by Sarah Hazem, that the Chinese vaccine, “Sinopharma”, has already been used in China, where about a million people have been subjected to this vaccine, indicating that the vaccine is not sold now Within the Chinese markets, but it is used in emergency cases, stressing that it will be available in the Chinese markets within a week from now.

On the other hand, the Chinese journalist Nader Rong said that China is ruling out the return of a second wave of the Corona virus again in their country, pointing out that China has taken many preventive and precautionary measures and rapid checks for citizens, discovering the infected and isolating them.

Rong added that the prevention measures in China are proceeding according to a complete mechanism, in addition to the Chinese government stressing that the citizens adhere to applying all preventive measures.

And the Bloomberg site revealed, that a spokesman for Sinopharm announced that the Chinese Corona virus vaccine, which was manufactured by the vaccine manufacturer Sinovac Biotech Ltd , “Sinovac” proved that it is able to create antibodies in 97% of those who were given the vaccine in the final stage of a trial in Indonesia.

Clarification came after he said PT Bio FarmaSinovac, Indonesian partner, the vaccine proved its effectiveness by 97% in early clinical trials there, explaining that the final efficacy rate will not end until January. After announcing the results of the third stage.

The official spokesman said that the Beijing-based company and its partners are still in the midst of analyzing data from its largest trial in the third phase in Brazil, where they expect to get an indication of the effectiveness of the vaccine.

Hundreds of thousands of people have already been dosed under the emergency use program for China.

Pfizer said last month that the vaccine developed in cooperation with BioNTech SE It has a protection rate of more than 90%. This high level of effectiveness was also seen in Moderna vaccine Moderna , Which uses the mRNA Similar, early analysis showed that the AstraZeneca vaccine AstraZeneca Plc It is a viral vector that was developed in cooperation with the University of Oxford, as it achieved a protection rate of 70% of the participants with the disease.

Senovac vaccine is approved Sinovac On an inactive copy of Corona Virus New, to teach human immune systems to recognize and destroy the real virus, it is a method widely used in vaccines against many other diseases such as hepatitis, influenza, and polio..

And the site said, drug regulators, and the World Health Organization, still consider the vaccine to be widely used if it can protect at least 50% of people from contracting the Coronavirus..