Chinese state media have published a sickening cartoon mocking the violence that gripped American cities over the Fourth of July weekend.

The cartoon, posted by Xinhua News Service, depicts two men in business suits clinking glasses of wine and chanting ‘to freedom,’ while a crazed-looking man next to them finishes their sentence with ‘of shooting.’

The gunman is wearing a shirt adorned with a skull and surrounded by a spray of blood as he blasts off a long gun and pistol. He’s standing over a gravestone that reads, ‘death from firearm.’

‘How a gun-happy nation spends its #FourthofJuly weekend,’ they captioned the cartoon.

The post was made as America’s streets were bathed in blood over Independence Day weekend, with 142 killed in 379 separate shootings. 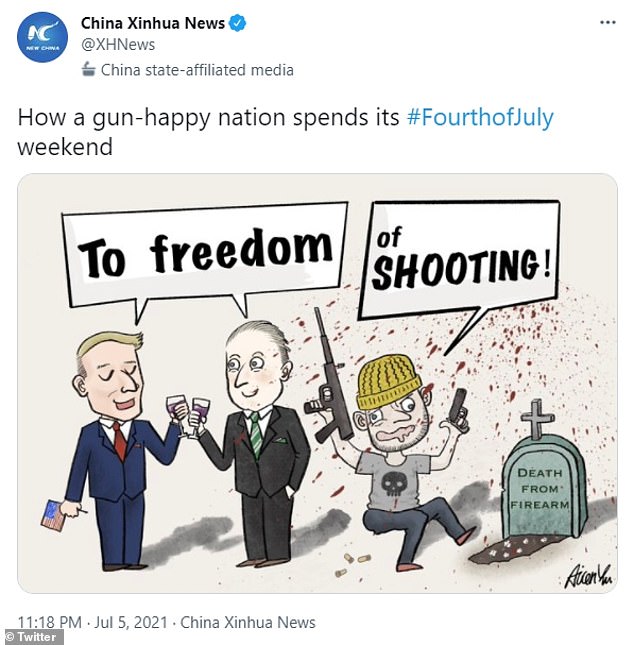 A cartoon published by Xinhua News Service, a media outlet owned by the Chinese Communist Party, satirized the violence American cities faced over the Fourth of July weekend

Republican lawmakers slammed the post and branded China as ‘hypocrites’ for criticizing the US despite their own human rights record.

Florida Sen. Marco Rubio told  Fox News that ‘No amount of propaganda can change the fact that the Chinese Communist Party is a murderous, genocidal regime that fears freedom, undermines democracy, destroys cultures and betrays its people.’

House Foreign Affairs Committee ranking member Michael McCaul said that the cartoon shows ‘just how crass and violent the Chinese Communist Party is that they have their propaganda outlets celebrating the deaths of 450 Americans over the July 4th holiday.’

He added, ‘The CCP is currently committing genocide against ethnic and religious minorities in their country and are brutally cracking down on peaceful protesters in Hong Kong who are simply crying out for freedom. Until they stop murdering and imprisoning their own people, I don’t believe anyone in the world should look to them for moral advice.

Meanwhile, Texas Senator Ted Cruz told Fox News that the cartoon could have come from a leftist American outlet. He said it ‘increasingly difficult to distinguish Chinese Communist Party propaganda from the progressive left’s anti-American incitement.’ 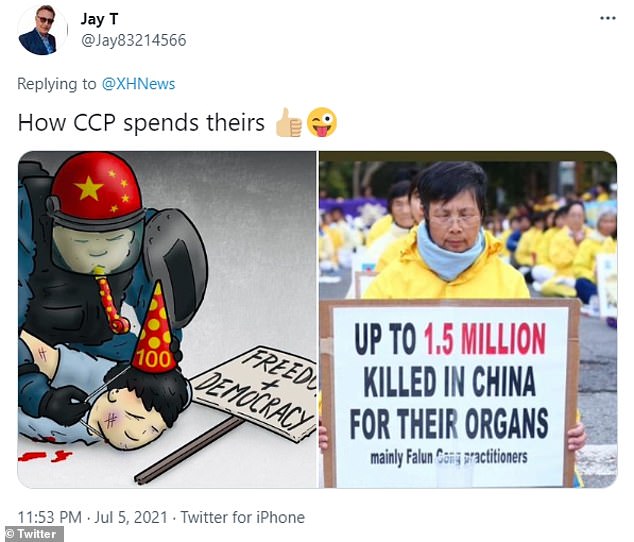 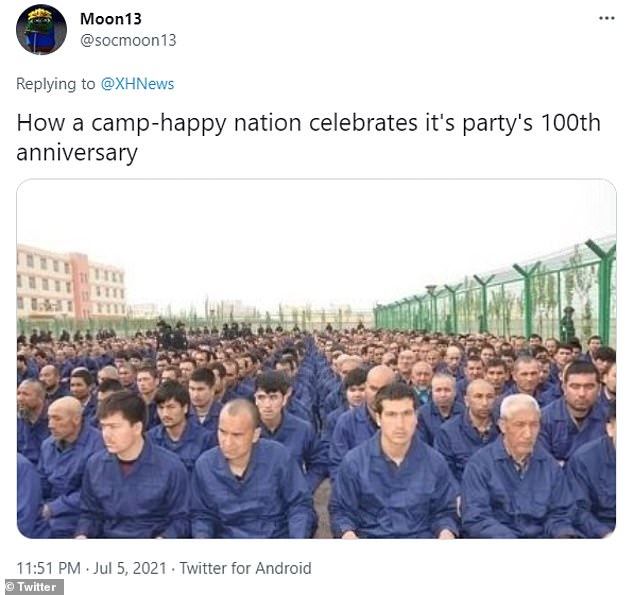 Twitter users also weighed in, criticizing China’s state media for the post and making their own digs against the Chinese Communist Party and how it treats its citizens. Many posted the iconic 1989 photo of a man protesting in front of tanks in Tiananmen Square.

Twitter user Jay T wrote, ‘How CCP spends theirs,’ with two photos: one a cartoon depicting a Chinese solider attacking a citizen while both of them wear party hats to celebrate the party’s 100th anniversary. The other shows a someone with a sign that reads, ‘Up to 1.5million people killed in China for their organs.’

User Moon13 was one of several Twitter users to comment with a famed 2017 photo showing detainees in a political education camp in Lop County, Hotan Prefecture, Xinjiang. He added the caption, ‘How a camp-happy nation celebrates it’s party’s 100th anniversary.’

And Jessica O’Donnell commented on the tweet, ‘When you stop holding thousands in concentration camps, complete with forced sterilization, then you can chime in.’ 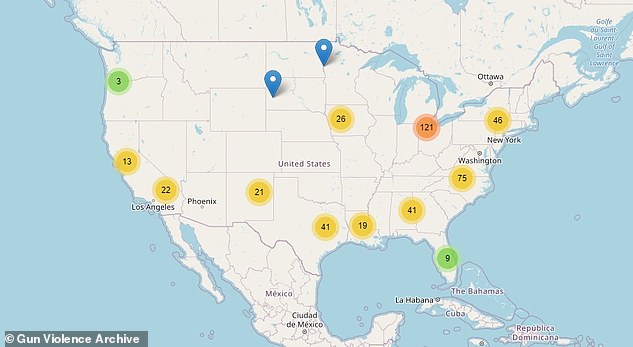 This is not the first time that Beijing has mocked American tragedies.

Li Yang, a consul general for the Chinese government in Rio de Janeiro, Brazil, posted multiple tweets poking fun at the Miami condo collapse which has left at least 46 dead and 99 missing.

‘American-style rescue: very layman in saving people, but too expert in blasting!!!’ Li wrote on Monday, including pictures of the condo collapse.

‘America is coming back!’ the CCP diplomat wrote in a tweet from July 2. ‘But none of the people buried in the ruins has come back!!!’

The graphic cartoon came after a weekend of bloody violence plaguing American cities. Chicago suffered the greatest bloodshed, with at least 92 shootings over the long weekend. That saw 16 killed and 76 injured.

National Guard soldier Chrys Carvajal, 19, was shot while attending a house party after coming home to visit his family for the Independence Day celebrations. 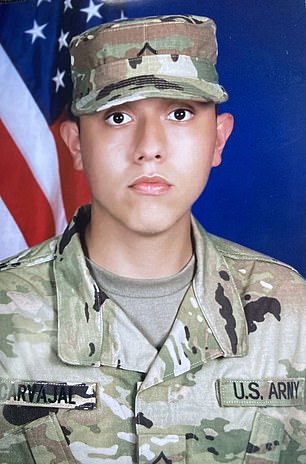 ‘My brother. He was all of life. He had a bright future in front of him,’ Carvajal’s sister Jennifer Ramirez told ABC 7.

Ramirez told ABC 7 that her brother was gunned down in a drive-by shooting when he went outside to grab something. A motive is unclear.

Others who survived shootings in the Windy City included children as young as five and six, with others shot in the 12 to 30 age bracket, the Chicago Sun Times, reported.

Two cops were among the city’s shooting victims. The unidentified officers were shot in the early hours of Monday while trying to disperse a crowd in the city’s Washington Park.

They were rushed to hospital, and are expected to survive their injuries.

Philadelphia saw a total of 17 people shot over the weekend, with 21 injured, and seven killed.

At least 26 people people were shot in New York City on Saturday and Sunday. Two men shot in the Bronx in separate incidents on Sunday died. A 19 year-old woman is fighting for her life after being shot in the chest by a man dressed in black while she and her boyfriend walked through Harlem on Sunday night.

And in the Dallas Forth Worth area, 29 people were shot on July 4, with five of those gunshot victims later succumbing to their injuries.

Three of those victims died while celebrating July 4 at the city’s Hamilton Park on Sunday night. Joseph Berry, 61, was shot while walking down Dallas’ Gould Street on Sunday evening. A third, unnamed victim, was shot and killed in Fort Worth on July 4. 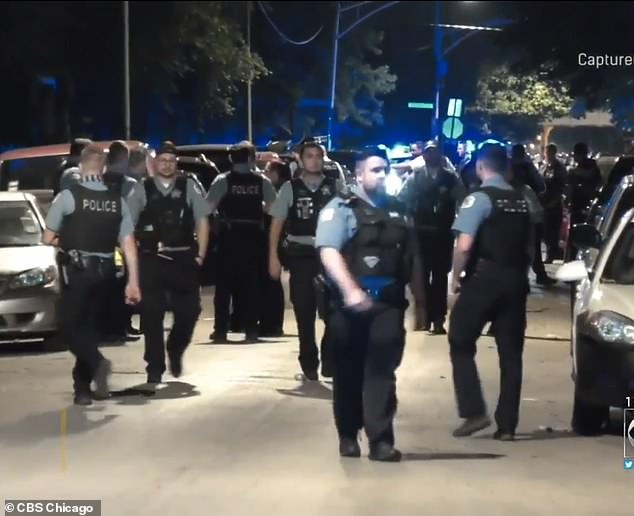 Chicago Police  are filmed on the beat Sunday night, after the Windy City saw 92 people struck by bullets during the long weekend 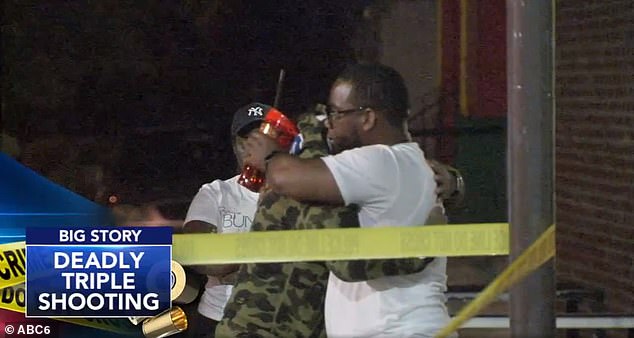 Loved-ones console each other after Sincarr Johnson, 23, became one of seven people shot dead in Philadelphia over the July 4 weekend 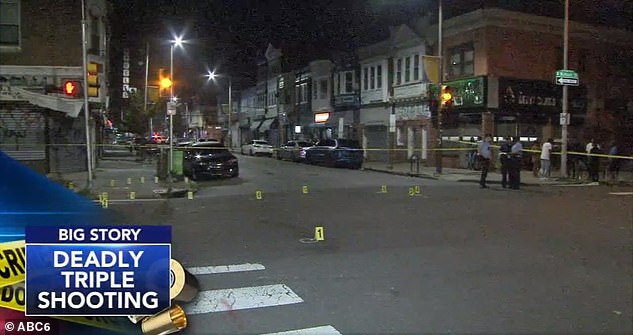 Johnson was shot dead in this Philadelphia street, with the city plagued by shootings over the long weekend 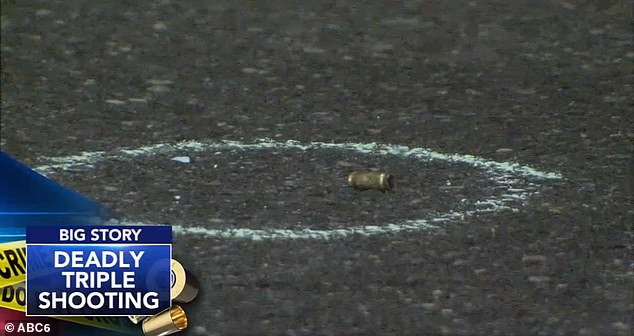 Elizabeth Debicki was seen on the set of The Crown for the primary time on Wednesday, as she filmed...

CNN's Chris Cuomo on Wednesday evening failed as soon as once more to deal with the scandal surrounding his...