We live in a time when comfort food mashups are a dime a dozen. Just look at the ramen burger. Or the cronut. Or, if you must, the Twinkie dog. But chefs have been assembling unlikely ingredients since way before Instagram provided extra inspiration – centuries before, even, as evidenced by Croatia’s medieval dessert, stonska torta (stone cake).

This marriage of chocolate and pasta has centuries of history. Some say it graced the tables of Dubrovnik nobility, back when the city was the center of the Republic of Ragusa, from the 14th to 19th century. Others describe it, conversely, as a peasant dish. 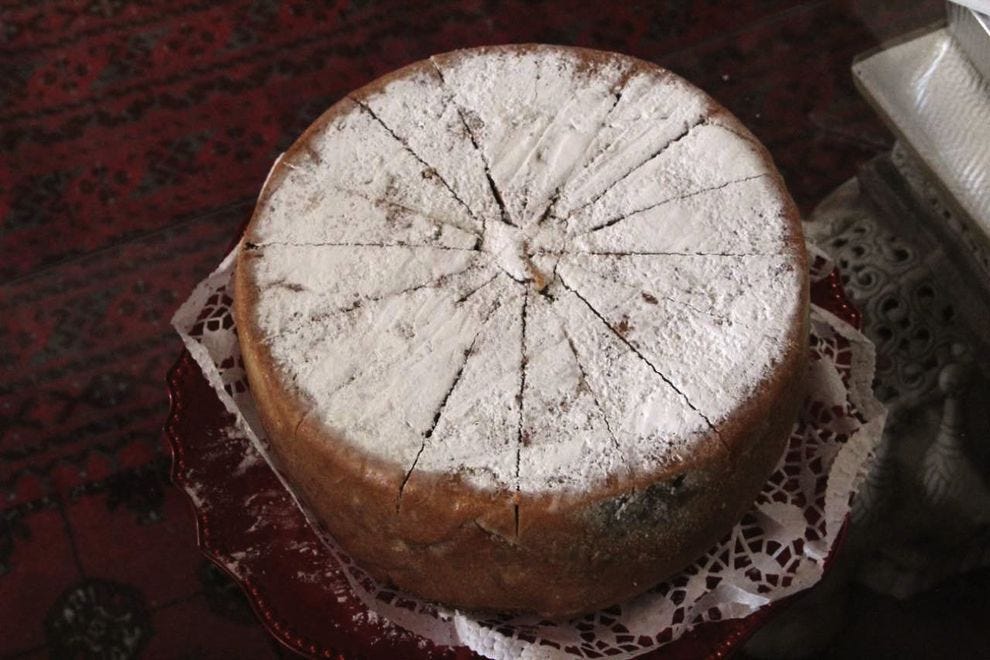 Stone cake – an anglicized translation of stonska torta, as it’s called in local Hrvatski language – is called such because it hails from the port of Ston, part of Croatia’s Pelješac peninsula, along the country’s famed Dalmatian Coast of the Adriatic Sea. Regardless of who originally invented it, stone cake was typically eaten at special occasions such as weddings, Easter and Christmas, and that tradition remains today.

“It’s for a celebration when family had the chance to get together,” says Hamo Ovcina, who grew up in Dubrovnik, 50 kilometers from Ston. “Today, a few restaurants [in Dubrovnik] will make it, but not many anymore.”

Pupo‘s patisserie in Old Town is one place where you can still order this unique dessert made of chocolate and pasta. Traditionally, makaruli, or Croatian macaroni, filled the cake’s pie-like crust, about four inches thick and 10 inches in diameter. These days, within the 1.2 miles of medieval walls in Dubrovnik’s Old Town, penne is more commonly used.

Cinnamon is the key spice used to flavor the cake, according to Andrea Pisac, who wrote the e-cookbook, “Croatian Desserts,” and ingredients like almonds, walnuts, vanilla and even pear liqueur round out the cake’s dynamic flavor and texture. Pastry and home chefs alike often top the cake with a dusting of powdered sugar and seasonal fruit, and all add their own secret touches.

“Both rustic and modern, authentic and foreign, this cake is like a coming-of-age girl that just turned up for her first ball dance,” Pisac says. Although she lives in the Croatian capital of Zagreb to the north, Pisac learned to love the Dalmatian specialty at an early age.

“My personal story with this cake comes from spending summers on Pelješac, where there is a family summer house in a small fishing village of Trstenik,” she says. “I tasted it in several restaurants and immediately fell for it. By that time, the cake was already having a comeback, so I knew there had to be a much older story connected to it. I investigated further, I spoke to the locals, and the pieces slowly came together.”

Throughout the past 400 years, Pelješac was home to a robust population of sea captains and sailors who brought home exotic spices and flavors from the East ­– ingredients such as the cinnamon, vanilla and cocoa – that define today’s stone cake.

When I was in Dubrovnik, I sampled a homemade stone cake made for gallery owner Tea Batinić, who explained another side of stone cake’s legacy: “It was an invention for people who didn’t have enough money [for other desserts]. It was done because they were saving money. Sometimes they used carob instead of chocolate.”

Batinić served the torta in thick wedges, striking honeycombed visions. The penne was cemented with finely crushed nuts and laced with chocolate, putting me in mind of the enduring walled fortress city, rising from the sea and cliffs.

The sweetness of the chocolate and nuts balanced the savory starch of crust and pasta. Then the cinnamon tones chimed in like the city’s hourly bells, and finally citrus nuances completed this harmony of unlikely flavor pairings.