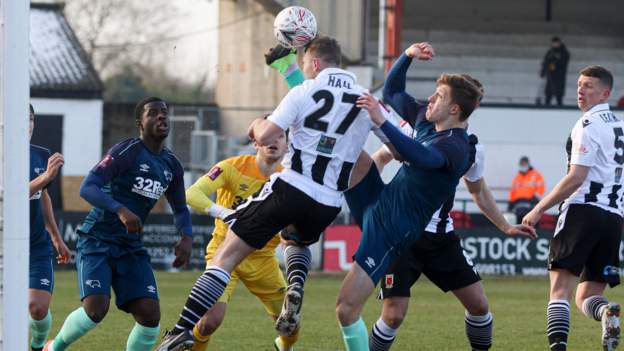 Non-league Chorley beat a decimated Derby County to reach the FA Cup fourth round for the first time.

A Covid-19 outbreak meant the Championship club were without their entire first team squad, boss Wayne Rooney and most of their under-23 side.

Nine of their starting 11 were making senior debuts and they fell behind when Connor Hall headed in from close range.

The National League North side, who beat 2013 winners Wigan in the first round before seeing off another League One side, Peterborough, can now look forward to Monday’s fourth and fifth round draw after overcoming a second-tier side, albeit one unrecognisable from their usual line-up.

Derby’s youngsters had the game’s first opening when Cameron Cresswell got in behind the home defence but Magpies goalkeeper Matt Urwin did well to deny him.

However, they soon found themselves behind when a deep corner caused chaos and Hall eventually headed home from two yards out.

The youthful visitors competed well throughout but struggled to retain possession and were fortunate not to fall further behind before the break when Will Tomlinson hit the crossbar from the edge of the area.

Derby goalkeeper Matt Yates then made a fine low save to keep out Hall’s shot in the opening moments of the second half.

The Rams grew in confidence as the game wore on but could not create a real chance of note and Calveley ended the contest with another close-range finish.

Budget 2021: £5bn fund for High Street to recover from Covid

Child heart transplants: ‘I’m ecstatic I got such an amazing gift’