Chris Lynn’s girlfriend has stood by the batsman after he caused outrage by asking Cricket Australia to arrange a charter flight from Covid-ravaged India – revealing she is eager for him to come home as soon as possible.

The WAGs of 17 Australian cricket players competing in the Indian Premier League do not yet know when they will be reunited with their partners – but the harsh reality is no different to the thousands still stranded overseas, more than one year after the pandemic began.

Prime minister Scott Morrison announced on Tuesday direct commercial and repatriation flights from India had been suspended until May 15 because of growing Covid cases in hotel quarantine, while indirect flights would also not be possible.

Lynn, who is earning about $357,000 playing for the Mumbai Indians, has led calls for Cricket Australia to organise a plane to get players out of India.

But his pleas for the government to enable the players – who have been living in a bubble and will be vaccinated next week – to return home with an exemption has been met with fury by Australians, who believe they should not be given preferential treatment.

Lynn’s partner Karlie Armansin said she did not feel comfortable commenting on the current situation ‘as everything is still up in the air’ – but admitted fellow WAGs are keen to get their loved ones home to Australia as soon as possible.

‘I know the IPL is doing everything they can to keep our players safe in their bubble,’ she told Daily Mail Australia.

‘And I know all partners would obviously love to have their significant other home safe and well ASAP when IPL is complete. 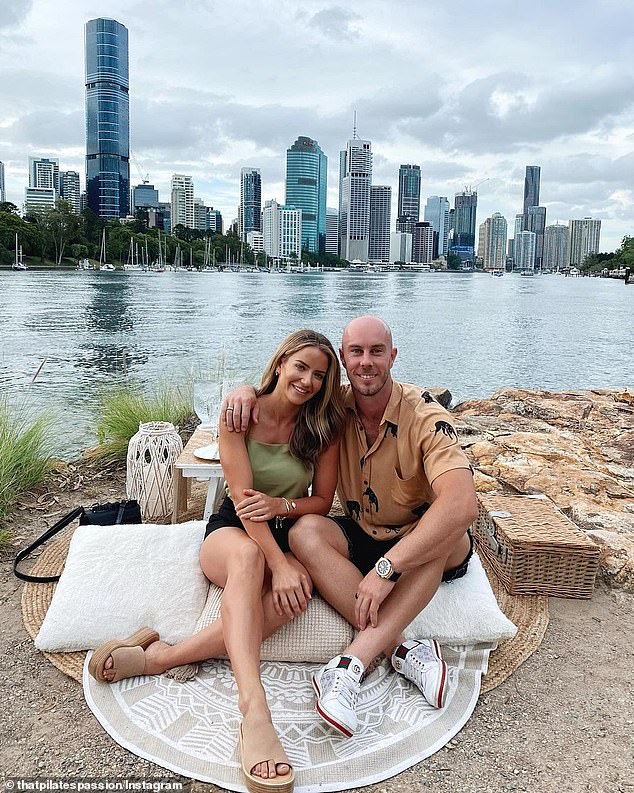 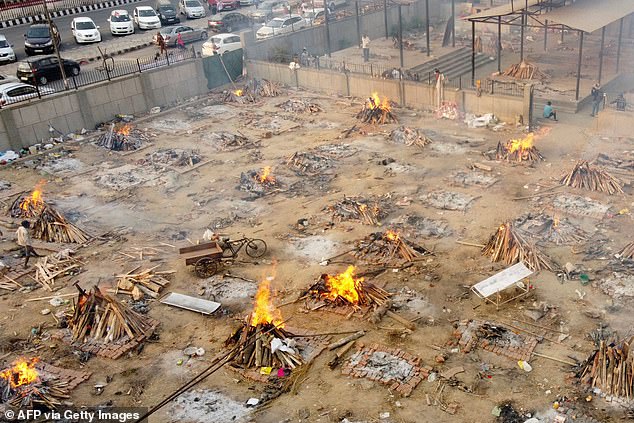 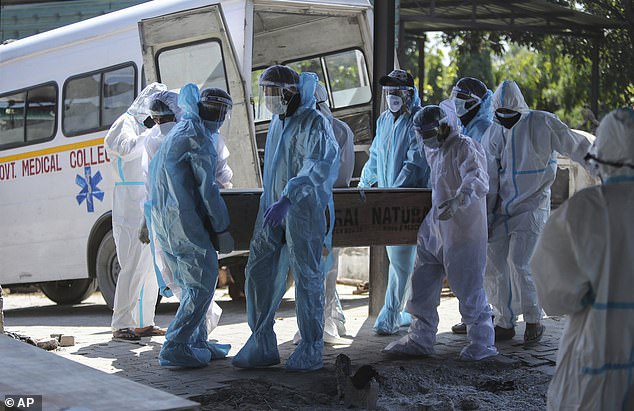 ‘Hopefully (Chris) is home at the end of May. It is not ideal and I miss him heaps but it won’t be forever and so just have to hang in there.’

Ms Armansin said she was hopeful Cricket Australia would charter a flight to pull the players out of India once the IPL finishes but noted she was ‘not sure’ that would be the case.

There are 36 Australian cricketers, coaches and commentators in India for the IPL as the South Asian country battles an out-of-control coronavirus crisis, with 350,000 new cases recorded there on Tuesday alone.

The IPL is scheduled to finish on May 31, while the regular season ends on May 24, so any extension of the government’s travel ban would create substantial headaches for Cricket Australia.

The prime minister made it clear Australians involved in the IPL would not jump the queue for repatriation flights whenever they resume.

Cummins’ contract is worth $3.16million, while Warner is earning $2.3million.

Lynn urged Cricket Australia to arrange the charter flight after the IPL finishes next month, in a text message made moments before the government’s border announcement was made official on Tuesday. 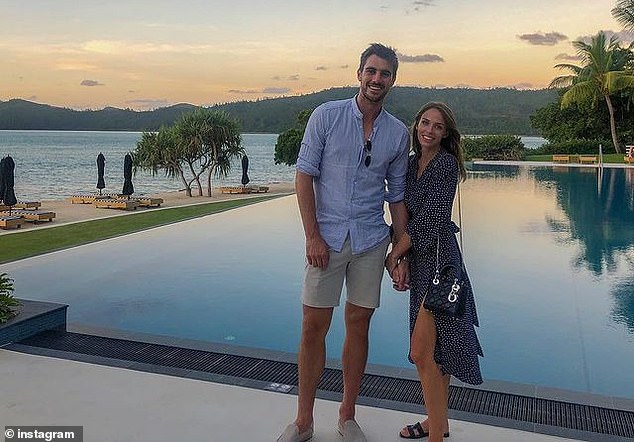 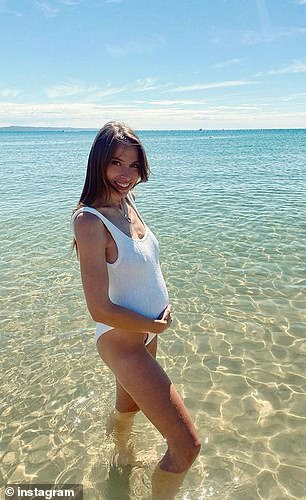 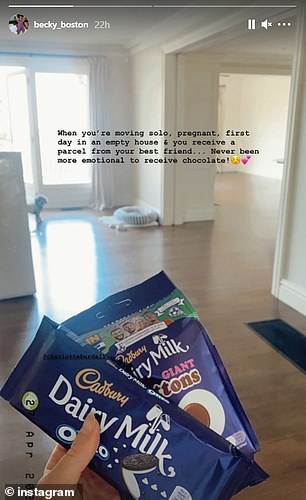 Becky Boston revealed she is expecting her first child with Cummins. The bride-to-be announced she was pregnant on Instagram over the weekend with a photo of her holding her growing baby bump at the beach (left). She also posted about moving houses on her own on Wednesday (right) 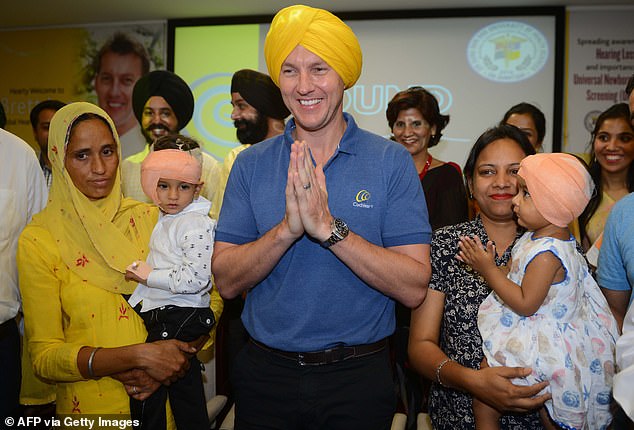 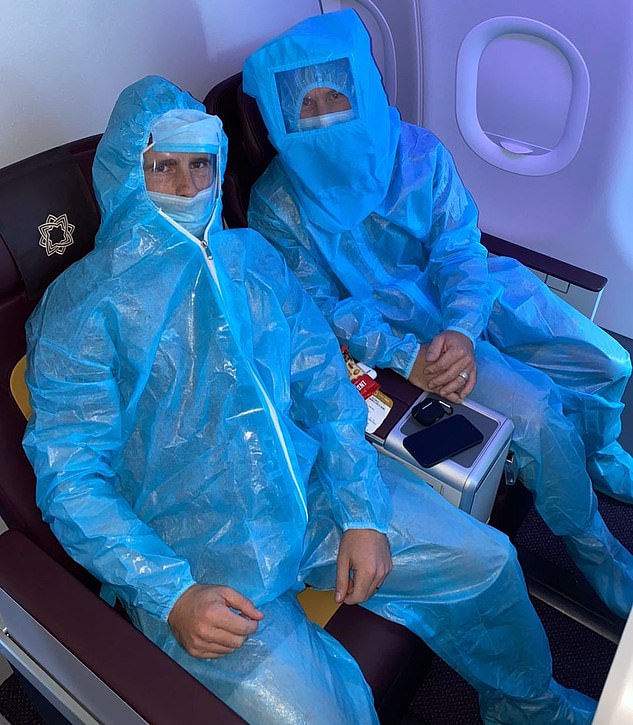 Cricket Australia had asked players a day earlier about their health and travel plans amid the escalating Covid catastrophe in India.

‘I texted back that as Cricket Australia make 10 per cent of every IPL contract, was there a chance we could spend that money this year on a charter flight once the tournament is over?’ Lynn told News Corp.

Lynn revealed that he and others are due to get a Covid vaccine next week to continue playing in the IPL and said the government should take that into account.

‘I know there are people worse off than us. But we are going from a really tight bubble and are getting vaccinated next week so hopefully the government will let us get home on a private charter,’ he said.

He insisted the players were not ‘asking for shortcuts’ and acknowledged ‘we signed up knowing the risks’ but said ‘it would be great to get home’ once the IPL is finished.

A recent Daily Mail Australia poll asking ‘Should the stranded Aussie cricketers get special treatment’ attracted more than 1,300 comments within a few short hours, with 90 per cent – or 1,249 people – responding ‘no’.

Readers were quick to voice their anger at the Lynn’s comments after Australia slammed its borders shut with India because travellers returning from the country have accounted for the vast majority of recent Covid infections in hotel quarantine.

Another said: ‘I love how cricketers want all their millions but then expect the rest of the country to bend over backwards for them.

‘Even if Cricket Australia hire a private jet… why should us Australians allow them back in? The rule is NO-ONE comes in from India. They can f**k right off. I don’t see them giving us any of their millions that they earned over in India.’ 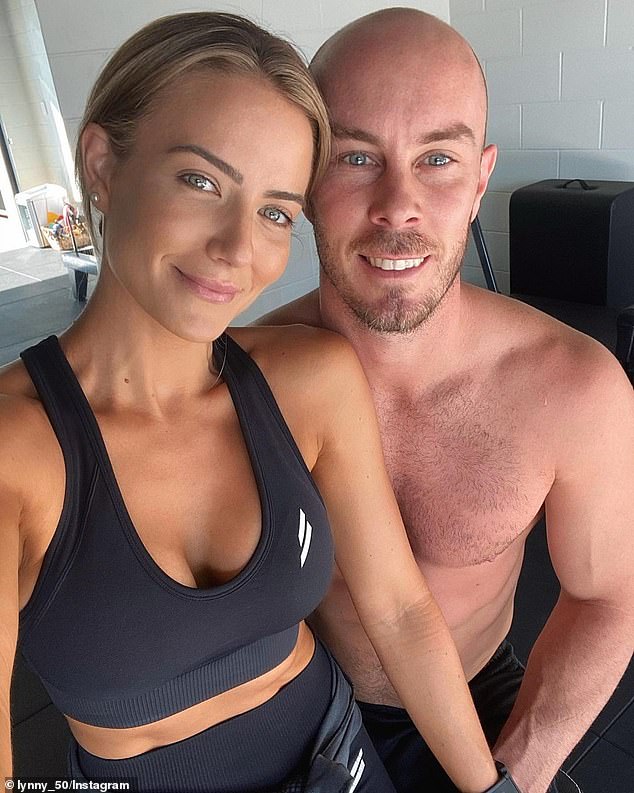 Lynn’s partner Karlie Armansin told Daily Mail Australia: ‘I know the IPL is doing everything they can to keep our players safe in their bubble’ 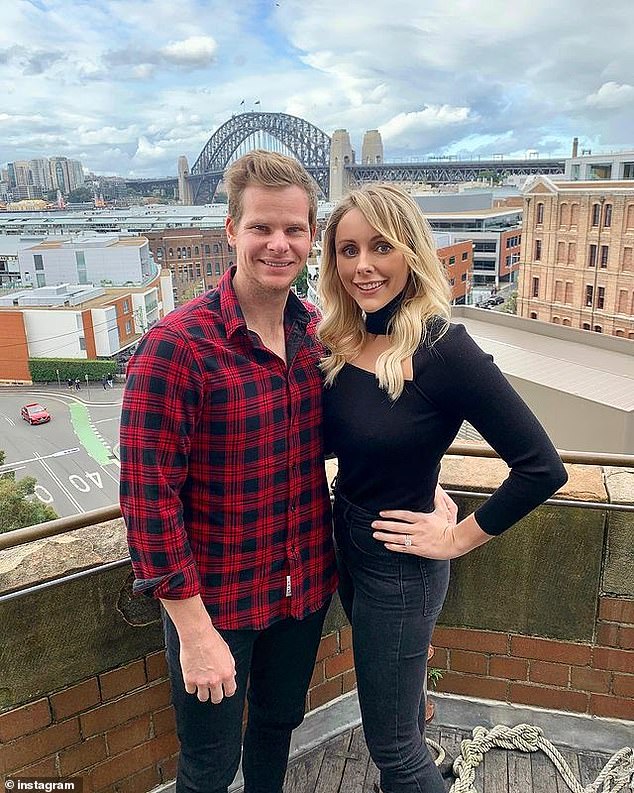 Steve Smith is pictured with his wife Dani Willis. Smith was purchased for $390,000 at February’s auction to represent the Delhi Capitals 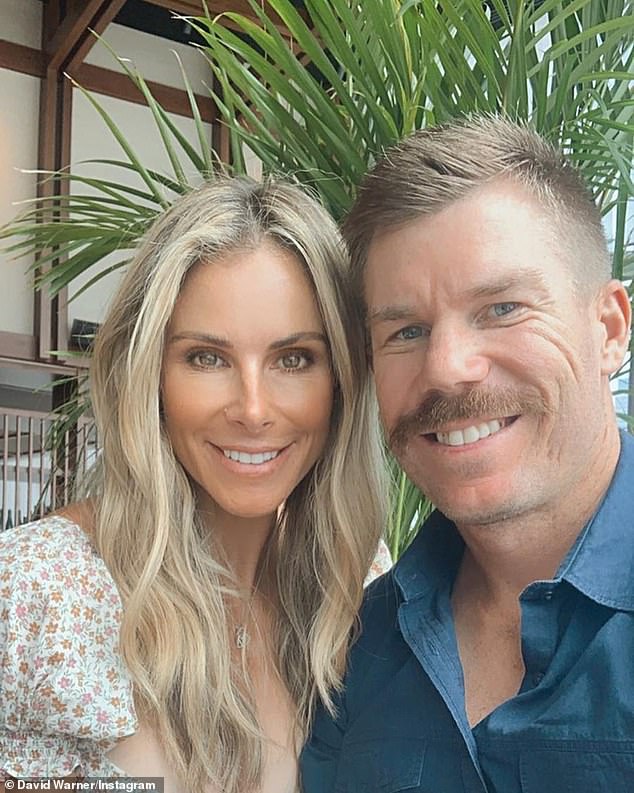 Cummins, who is in India representing Kolkata Knight Riders, announced he would give $50,000 to the PM Cares Fund, with the cash to be spent on purchasing oxygen for India’s overcrowded hospitals.

The Test cricketer urged fellow IPL players and fans across the world to contribute.

It comes just days after his fiancée Becky Boston revealed the couple are expecting their first child.

The bride-to-be announced she was pregnant on Instagram over the weekend with a photo of her holding her growing baby bump at the beach.

‘I can’t hide this happiness any longer!’ She wrote. ‘Baby Boston Cummins will be joining us in Spring. We are so excited to meet you!’

On Tuesday, Ms Boston shared an Instagram story about moving into her new home in Sydney’s eastern suburbs without Cummins.

Australian Cricketers’ Association boss Todd Greenberg confirmed his organisation and Cricket Australia are in talks regarding the prospect of a charter flight, which would require government approval plus significant funds.

Greenberg says the majority of players feel ‘really comfortable’ in the IPL’s biosecurity bubble and intend to finish their commitment.

However, he admitted they remain uneasy about what will happen beyond the final. 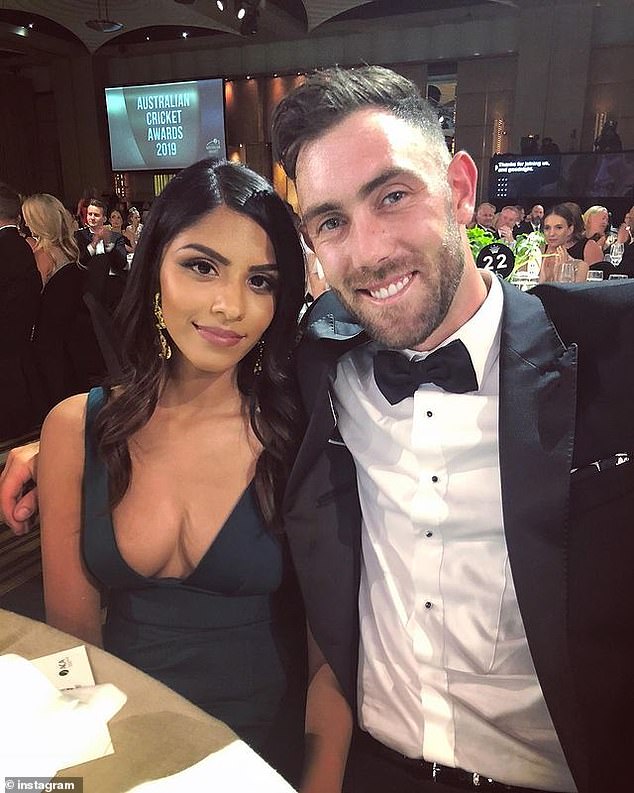 Glenn Maxwell (pictured with his partner Vini) is on $2.52million contract with Royal Challengers Bangalore 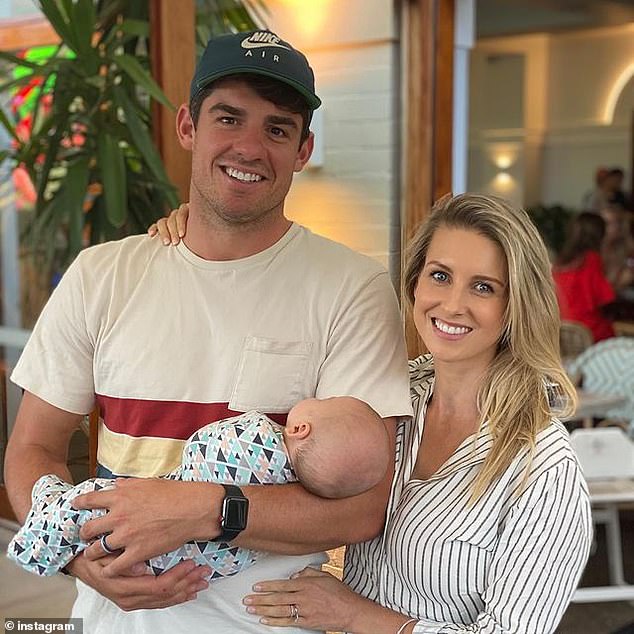 Moises Henriques (pictured with partner Krista), who is playing for the Punjab Kings, also remains in India

‘They’re all pretty anxious. They’re in one of the biggest hotspots we’ve seen since Covid. They’re very anxious about getting home at the end,’ Greenberg told 2GB.

Sports Minister Richard Colbeck, asked about potential approval for a Cricket Australia charter flight at a time when thousands of Australians are trying to flee India, was coy on Wednesday.

‘There aren’t any decisions that have been made yet with respect to the cricketers,’ Mr Colbeck told ABC radio.

Former international cricketer Brett Lee, who is in India to commentate the competition, on Tuesday announced he would donate 1 Bitcoin, about $71,000, to Crypto Relief.

‘India has always been like a second home to me. It saddens me deeply to see people suffering due to the ongoing pandemic,’ he wrote on Instagram.

He also commended Cummins for launching the initiative.

TV presenter Neroli Meadows, from Western Australia, who is also commentating in India thanked friends, family and her Instagram followers for checking in on her.

‘It’s hard to know the right thing to do or say right now,’ she wrote. 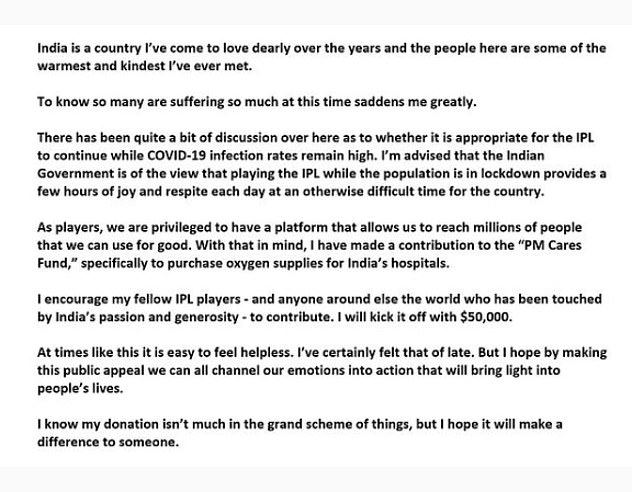 Fast bowler Pat Cummins, who is in India representing Kolkata Knight Riders, announced he would give $50,000 to the PM Cares Fund 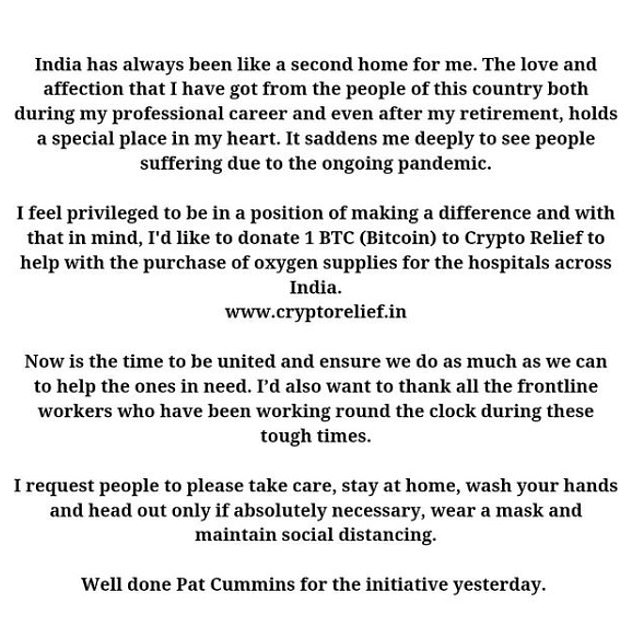 Former international cricketer Brett Lee, who is in India to commentate the lucrative competition, followed suit on Tuesday

‘My approach is to try and stay positive, support the people around me and be part of providing some sort of small reprieve for those watching on TV.

Moises Henriques, who is playing for the Punjab Kings, also remains in India. Glenn Maxwell is on $2.52million contract with Royal Challengers Bangalore.

The Australian cricketers playing in the IPL are joined by coaches Ricky Ponting and Simon Katich and commentators Brett Lee, Matthew Hayden and Michael Slater.

Home Affairs Minister Karen Andrews said about 9000 Australians in India now face the reality of no flights home until at least May 15.

‘As soon as it’s possible for us to look at flights to bring them back to Australia, we will be doing all that we can to make that happen,’ she told Sky News on Wednesday.

‘Our heart goes out to those people and their families.’

Ms Andrews has encouraged them to use personal protective equipment if they have access to it and to follow health guidelines being promoted in Australia such as social distancing and thorough hand washing.

The government will review health advice closer to May 15 and Australians deemed to be vulnerable will be the priority when flights resume.

India has recorded more than 300,000 new coronavirus cases each day for the past week.

CEO fired after confrontation with teen who wore dress to prom

Willow Smith details her lifestyle on 'Red Table Talk': What you should know about polyamory

Willow Smith details her lifestyle on 'Red Table Talk': What you should know about polyamory