CHRISTOPHER STEVENS: Four couples, one house and a plot that doesn’t add up… yet!

CHRISTOPHER STEVENS reviews last night’s TV: Four couples, one house and a plot that doesn’t add up… yet!

The Great British Bake Off

Full marks for ambition. The one small word of that title, Life (BBC1), promises gigantic themes. And writer Mike Bartlett tries to live up to the boast, with interlocking stories about four very different couples sharing a house.

The characters are swiftly and strongly drawn. Each is at a crisis, every one so different from the next that it isn’t difficult to keep track of all four plots as they unfold.

But in every case there’s something about the set-up that leaves us scratching our heads, saying: ‘That doesn’t really make sense.’

Adrian Lester plays David, whose wife Kelly (Rachael Stirling) died in a bizarre accident five weeks earlier (she fell off an escalator). He still imagines her presence and talks to her ghost. 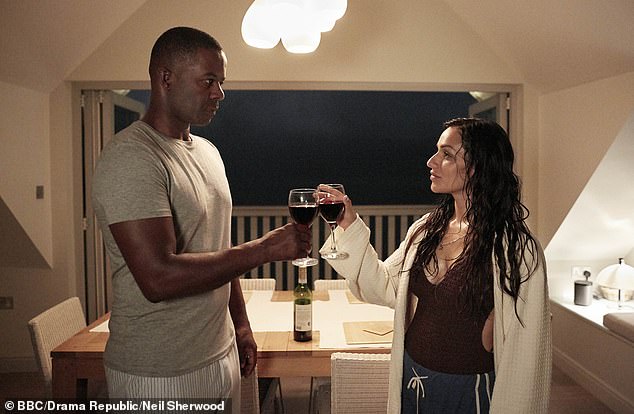 Adrian Lester plays a lecturer who is falling in love with one of his students, played by Saira Choudhry, in Life

Nothing unusual there — that metaphor for grief crops up in dramas from the detective serial River to the soapy Last Tango In Halifax.

However, lecturer David is already falling in love with one of his students, the stalkerish Saira (played by namesake Saira Choudhry). Barely a month after he was bereaved, we’re meant to believe he’s talking to his dead wife’s spectre about ‘moving on with his life’.

That seems a bit soon. It’s only decent to wait for the hallucinations to stop, before dating again.

Strangely, David’s neighbour, divorcee Belle (Victoria Hamilton), hasn’t heard that Kelly is dead. You’d think, living in the same house, that someone would have mentioned it. Fatal escalator incidents usually provoke some small talk, at the very least.

Even more inexplicable is the business of Gail and Henry (Alison Steadman and Peter Davison), the retired duo who live in the flat upstairs. He’s a terrible blowhard who never listens to a word his wife says, though she doesn’t notice this until a friend points it out.

Trenchcoat of the night:

DCI Caroline Goode (Keeley Hawes) turned up in the morgue to watch an autopsy in Honour (ITV) sporting a belted gabardine raincoat. Surely detectives don’t still wear those. They went out with Colombo — or Harold Wilson.

Why, then, are they living in this shared house at all? Henry behaves like a successful businessman, with money for lavish parties and deep pockets for his children. They don’t seem the type to be tenants in a suburban rental.

The greatest mystery, though, is posed by the young couple on the ground floor. Hannah (Melissa Johns) is pregnant, but her partner Liam (Joshua James) isn’t the father. Delivery driver Andy (Calvin Demba) is the baby’s dad, according to Hannah — they had a drunken one-night stand at a party.

Liam doesn’t appear to mind at all, and at first it seemed the couple were duping dim Andy into paying for a cot and other equipment. But when the baby arrived early, it was Andy that Hannah wanted beside her.

Still Liam didn’t object. I’ve never heard of any bloke being quite that open-minded. But Bartlett is an experienced writer, the creator of Doctor Foster. The cast is outstanding, too. We’re just going to have to trust them, and hope for some explanations soon.

Don’t expect any coherent explanations from Matt Lucas, replacement presenter on The Great British Bake Off (C4). He’s enjoying himself with such delirious glee that he’s talking nonsense.

‘You do be having 30 of minutes remaining,’ he shouts out happily to the bakers making macaroons — though he refrains from doing a silly accent as he would have done on Little Britain. Silly accents are verboten now.

Then he forgets himself and starts rapping in an African-American voice, though he’s more Mr T than Jay-Z.

Co-presenter Noel Fielding obviously thinks his friend is hilarious. Like mischievous eight-year-olds, these two are going to wind each other up until someone gets a proper telling off, probably from Prue Leith. Their bad behaviour has breathed new life into the show.

Universal Credit: Plea not to axe £20 a week ‘lifeline’

What are trade agreements and why do we need them?

What are trade agreements and why do we need them?