With his drooping jowls and heavy eyes, a liverish glow suffusing his cheeks, Geoffrey Palmer was the archetypal long-suffering husband.

The actor, who has died peacefully at home aged 93, was famous for his unsmiling face, like a bloodhound with the colic.

Opposite Wendy Craig in the late Seventies sitcom Butterflies, and Judi Dench in As Time Goes By 20 years later, he played lovably grumpy, world-weary men. 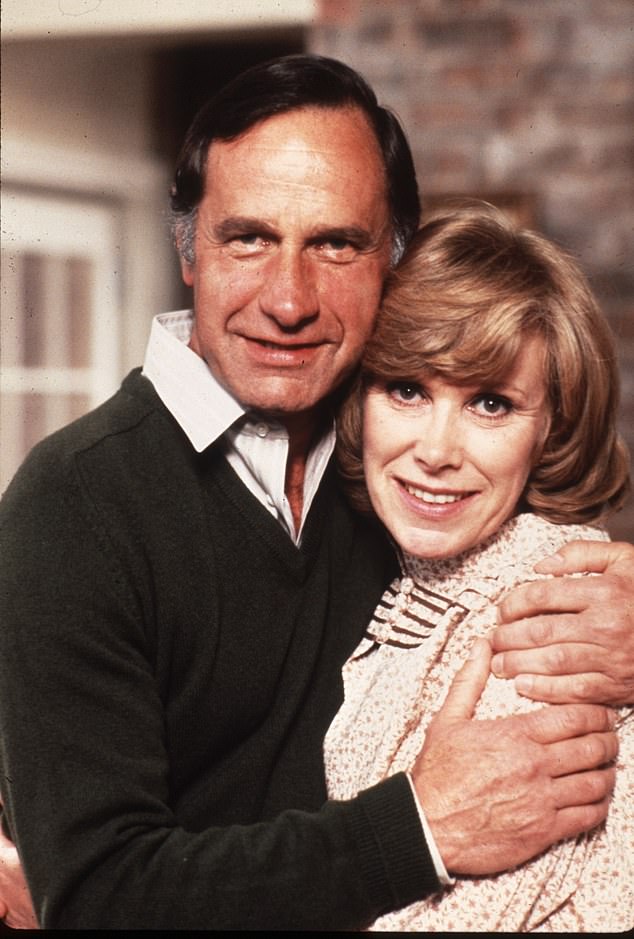 Geoffrey Palmer, pictured on the set of Butterflies with Wendy Craig

‘I am smiling,’ he grumbled to Dame Judi in one episode. ‘It’s just that my face refuses to co-operate.’

Even in off-duty moments, the camera couldn’t catch him with a grin. ‘I’ve spent years with truck drivers leaning out of the window and saying, “Cheer up mate, it might never happen”,’ he remarked. ‘In spite of the looks, I am actually very happy.’

That expression of chronic dyspepsia became familiar to millions through comedies such as The Fall And Rise Of Reginald Perrin, in which he was brother-in-law Jimmy, a military man forever on the scrounge with the catchphrase: ‘Bit of a cock-up on the catering front.’ The character even got his own spin-off series, Fairly Secret Army.

He played a disgruntled guest in Fawlty Towers, demanding sausages for breakfast while hotelier Basil (John Cleese) tried to get rid of an inconvenient corpse. And opposite Penelope Keith, he reverted to type in Executive Stress as publisher Donald, who finds himself working for his wife after a company takeover.

Palmer possessed a lugubrious sense of mischief that fuelled his deadpan wit. He enjoyed making other people laugh, while his own face never registered a flicker of amusement. Dench was a particular target, because he knew he could make her break into giggles in the middle of a take, just by arching an eyebrow. 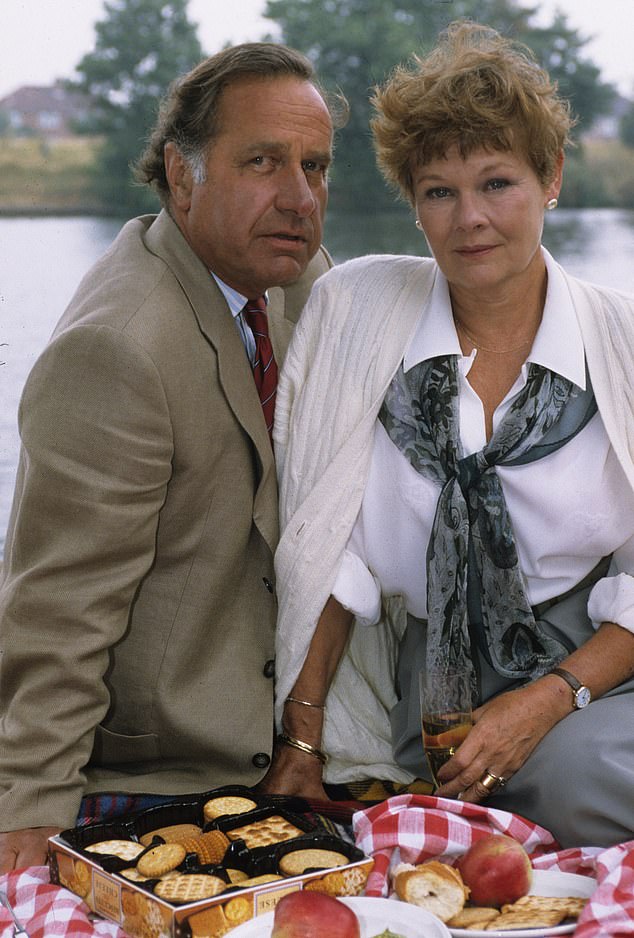 ‘He’s the naughtiest man I’ve ever worked with,’ she once said. When her laughter wrecked a scene, he would stare around the set and complain: ‘Is Eileen Atkins free? Maggie Smith, perhaps?’

His mock indignation was all the funnier because everyone on the show was well aware that this was not mere name-dropping.

Palmer worked with nearly every post-war great, including John Gielgud, Ralph Richardson and Paul Scofield. Lord Olivier wanted him for a production at the National Theatre so much that he rang Palmer at home: ‘You don’t need to audition, dear boy,’ he assured him.

Yet Palmer never intended to be an actor, stumbling into the career quite by accident. Born in north London in 1927, he loved going to West End shows with his music-loving mother, but his chartered surveyor father regarded the theatre as ‘synonymous with vice’.

After post-war National Service with the Royal Marines, Palmer settled down to life as an accountant at an office in Piccadilly. A girlfriend invited him to come along to her amateur dramatics group, the Woodside Players, and he discovered a love for comedy.

At first, playing in repertory theatre in Croydon and Kew, he was – in his own words – ‘absolutely awful, pulling faces’. His new career was slow to blossom: ‘It was a slow progression, being not very quick on the uptake.’

But gradually he learned how to make the most of his looks, by never smiling. ‘I like comedy that doesn’t look like comedy,’ he said. ‘I hate the sort of comic actor who grins to show he’s being funny.’ 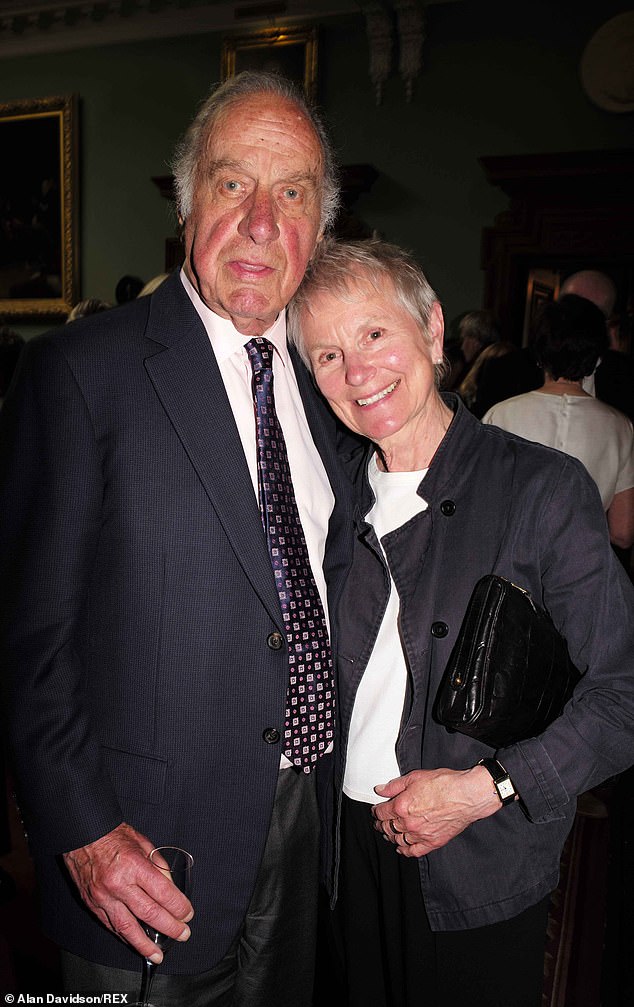 Geoffrey Palmer, pictured with his wife Sally Green at the celebration of his friend Donald Sinden in 2015

His first TV role, in the early 1950s, was as an extra on a Richard Dimbleby series, Round Britain. As the revered journalist interviewed a fishing boat captain in the studio, Palmer stood silently in a woolly cap and pullover, pretending to be one of the crew. His fee was two guineas and a bunch of daffodils. Sketch shows started using him for walk-ons, as a policeman, a doctor or an Army corporal with just a single line.

His reputation grew, until Olivier noticed him and, aged 44, he made his first appearance on the London stage. A role at the Royal Court Theatre followed, in a John Osborne play, where film director Lindsay Anderson spotted him and cast him in 1973’s Oh Lucky Man. Quietly, Geoffrey Palmer had arrived.

By then he had met and married Sally, his wife for 56 years. They had two children, Harriet and Charles, though Palmer never spoke about his home life.

He had no passions or hobbies, he insisted, except for a fondness for fly fishing. He did speak out against the HS2 rail plans that threatened his beloved Chilterns countryside in Buckinghamshire. It was, he huffed, ‘a vanity project’.

Sue Lawley on Desert Island Discs told him he’d carved a niche for himself as ‘a suburban, reactionary F-A-R-T’ and with typical self-deprecation, Palmer didn’t disagree. ‘I’m middle class and not over-bright,’ he claimed. ‘There’s a bit of Disgusted Of Tunbridge Wells in me.’

Without fuss or flamboyance, however, he made a unique career for himself. His reassuring, rumbling voice was ideal for voiceovers, and the German car manufacturer Audi was so pleased with the way he drawled ‘Vorsprung Durch Technik’ on its adverts that it gave him a new car every year. It almost brought a smile to his face.

Get a delivery slot this Christmas... yule be lucky!