CHRISTOPHER STEVENS: Get the soapbox… it’s a big vote for cliches in this lame political thriller

As Oscar Wilde nearly said, to lose one character in a violent car accident is unfortunate. To do so twice in a single episode looks like careless driving.

Sleazy Cabinet minister Peter Laurence, played by Hugh Laurie in Roadkill (BBC1), was heading home in his vintage Mercedes to confront his wife about his infidelity, when he ploughed into a deer.

Peter was on his mobile at the time, which apparently meant he couldn’t look at the road. 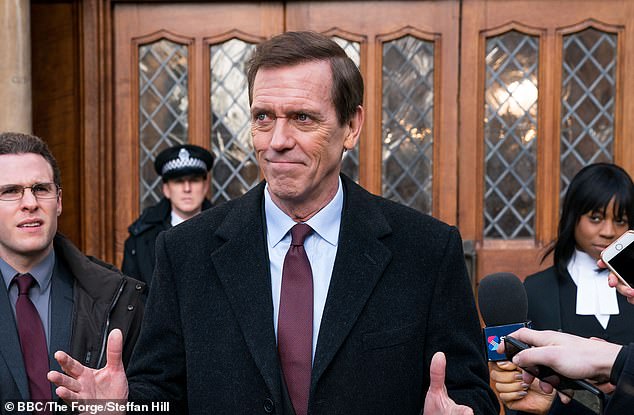 Sleazy Cabinet minister Peter Laurence, played by Hugh Laurie in Roadkill (BBC1), was heading home in his vintage Mercedes to confront his wife about his infidelity, when he ploughed into a deer

Before cellphones, lazy dramatists had their characters fiddle with the cassette player or the cigarette lighter when they wanted to engineer a crash. The phone lends a modern twist to an old cliche.

When he glanced up, there was a deer, staring at him like . . . well, since we’re doing cliches, like a deer in the headlights.

The writer of Roadkill, Sir David Hare, must be very pleased with his title because just five minutes earlier he wiped out maverick journalist Charmian Pepper (Sarah Greene) by mowing her down with a speeding van on a backstreet in Washington DC. Did Peter engineer her murder?

Fortunately for the plot, moments before her demise, Charmian spilled all her secrets to a stock character, the bloke she barely notices even though he is besotted with her. His name, as if it matters, is Luke.

Now Luke (Danny Ashok) can plunge into an obsessive hunt for The Truth and sacrifice himself for Charmian’s memory. At least, if he has watched House Of Cards and countless other political thrillers, he will know this is what is expected of him.

Roadkill is a disappointment. In its second week, lumpen dialogue squandered Laurie’s charismatic performance as a populist MP.

‘You can get away with anything if you just brazen it out,’ Peter announced, stating the obvious so baldly, even Donald Trump might think the line lacked subtlety.

His confrontation with prime minister Helen McCrory, which should have been a highlight, turned into an excruciating undergraduate debate about prison reform.

The PM is a flog-em-and-hang-em hardliner, while Peter has improbably discovered his inner Malcolm Muggeridge since learning that the daughter he has never met is in prison.

The Danish police drama DNA (BBC4) was just as big a letdown. It stars half the cast from Denmark’s outstanding crime serial The Killing but lacks all the layered cleverness of its predecessor.

Anders Berthelsen is Rolf, a detective so dedicated that, when he couldn’t find a babysitter for his six-month-old daughter, he took her with him on a case. 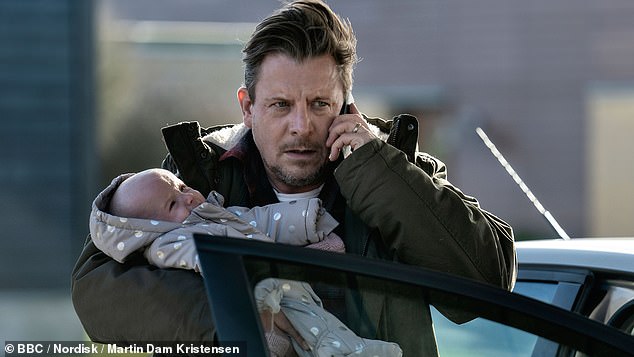 The Danish police drama DNA (BBC4) was just as big a letdown. It stars half the cast from Denmark’s outstanding crime serial The Killing but lacks all the layered cleverness of its predecessor

This case involved a ferry crossing to Poland in a storm. Naturally, when seasick Rolf nipped into a bathroom to be ill, he left the baby in her pushchair on deck — in a howling gale and lashing rain.

As he explained to his wife later, it was only for a couple of minutes. Why would he bother bringing her inside?

To his astonishment, when he emerged, the pushchair had been blown down a flight of steps and the baby was gone.

Mrs Rolf says their child must have been washed overboard and not to worry, but Rolf feels quite guilty about it. And he has always suspected she was kidnapped.

I prefer to believe that a snatch squad of seagoing social workers grabbed the baby for her own safety. It’s no more unlikely than anything else. Anyway, I have no intention of watching the rest to find out.

Blow-out of the weekend: Peckish after days of chopping logs, the competitors on The Bridge (C4) voted to skip work and have a feast instead. Heaps of chicken, cake and champers arrived. This endurance test looks more like a holiday camp.

School meals: Row continues as half term begins in England

England suffer further blow ahead of this year's Ashes with Olly Stone ruled out for the...