The adverts used to supply the wittiest, most entertaining moments of an evening’s viewing.

Leonard Rossiter spilled Cinzano down Joan Collins’s dress, a man with a comb-over found happiness in a cigar . . . it was telly stardust.

But the advert that masqueraded as the finale for the return of Spitting Image (ITV) was the crudest piece of lavatorial humour ever devised to sell us anything.

It’s hard to describe in a family newspaper, but suffice to say it featured the American President using an unconventional part of his anatomy to wield the pen as he signed up online to the streaming video service, Britbox. 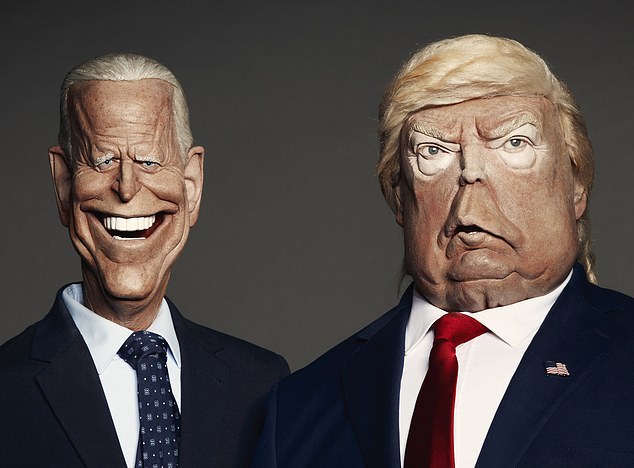 This whole episode was an extended plug for the series on BritBox (£5.99 a month). It was an odd one to choose, since the U.S. election is out of our control

If we subscribed, too, we could watch the second part of a U.S. election special, and several other episodes released last month. Though after sitting through half an hour of flaccid jokes and unconvincing impressions, why would you want more?

Spitting Image was once lethal satire, a blood-tipped corkscrew skewering politicians and celebs. It could be brutal, clever and barking funny — not always, but often enough to be memorable.

After a lay-off of nearly 25 years, it returned via Britbox, the repeats-on-demand channel set up by ITV and the BBC. Britbox clearly has ambitions to emulate Netflix and Amazon Prime, by commissioning new series, and bringing back Spitting Image was a sure way to earn headlines.

But it’s pitifully obvious this version is British humour meant for a U.S. audience, which just doesn’t work.

Some of the puppets need captions — did you spot Nancy Pelosi? Would you really know who she was, even if she had a name badge? 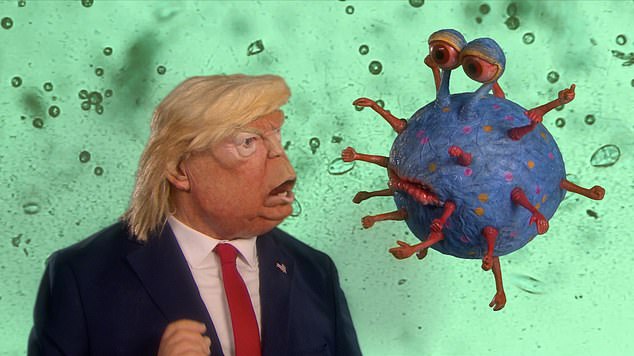 The sketches featuring Trump were probably the funniest — including the running joke that his son-in-law Jared is a shop mannequin, and the way his slobbering pal Corony Virus is a guest at all his rallies

Me neither, and I’m sure American viewers feel the same about Matt Hancock and Keir Starmer.

This whole episode was an extended plug for the series on BritBox (£5.99 a month). It was an odd one to choose, since the U.S. election is out of our control.

Still, the sketches featuring Trump were probably the funniest — including the running joke that his son-in-law Jared is a shop mannequin, and the way his slobbering pal Corony Virus is a guest at all his rallies.

‘Catch me if you can!’ chortled the rubber pathogen.

‘My puppet is the greatest and I love it,’ sighed Mr President, kissing himself goodnight in the bathroom mirror.

Less successful are the skits with Dominic Cummings, who ought to be a gift to satirists.

His head throbs, and he drones like an alien from the Planet Megabore, but every gag is visible so far in advance that we might as well have written notice of the punchlines.

The writers tried to capture the show’s old magic by summoning the ghost of Margaret Thatcher to abuse the Cabinet.

‘Cretinous wets!’ she boomed, and a pilot light of nostalgia flickered. But it soon went out.

All the channels were scrambling to find new things to say about Donald Trump, before Tuesday’s vote.

BBC2 looked at his mishandling of Covid-19 in Totally Under Control, while ITV asked what it was like to be Muslim In Trump’s America.

The most emotional was American Nightmare: Trump’s Breadline Kids (C4), which followed three adolescents in the swing state of Ohio, whose parents were struggling to feed them.

Kyah, aged 14, who was homeless and sleeping on the floor at a friend’s house, was articulate: ‘Sometimes I do cry, I feel drained and dark,’ she said.

But it was 13-year-old Shawn who seemed saddest, breaking down when his mother called out from the next room that his favourite teacher had died from cancer, during lockdown. To see that was painfully moving.

Unchecked mate of the weekend: Dodgy politician Peter (Hugh Laurie) met a pal for a game of chess in Roadkill (BBC1). But even a beginner could spot the position on the chessboard was impossible.

Why do TV dramas never bother to get these things right?

US election 2020: Why does the vote matter to people in UK?