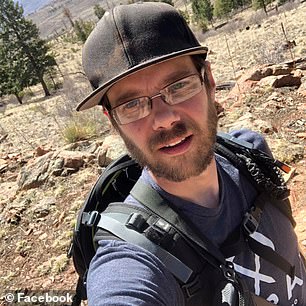 A hero civilian who was shot dead while trying to take down a gunman targeting cops at a suburban Denver shopping center was reportedly killed by a stray bullet fired by police.

John Hurley, 40, was fatally shot on Monday in Arvada after he drew his pistol and fired at gunman Ronald Troyke, 59, when the suspect ambushed cops, killing Officer Gordon Beesley.

Police hailed Hurley as a hero for sacrificing his life to confront the shooter.

Investigators have not said who shot Hurley, but The Denver Channel reported that three sources – including two from law enforcement – say it was a police bullet that killed Hurley.

It’s not clear what happened in the moments that led to Hurley being shot, as police officers in the town do not yet wear body cameras, though that’s scheduled to change in two years.

The district attorney’s office has not commented on whether or not charges could be filed against the cop who fired the shot that killed Hurley.

Arvada police did tell The Denver Post that an officer is on administrative leave, which is considered to be standard protocol, but didn’t reveal their identity.

Police officers investigate the scene the shooting in Olde Town Arvada on Monday, which left Beesley, Hurley and the gunman dead

Beesley, 51, ‘was targeted because he was wearing an Arvada police uniform and a badge,’ police Chief Link Strate said at a news conference on Tuesday.

‘Officer Beasley was ambushed by someone who expressed hatred of police officers.’

Strate called it a ‘deliberate act of violence’ and an ‘isolated incident.’

The suspect was identified as 59-year-old Troyke by Jefferson County coroner Annette Cannon.

Strate also did not explain what prompted Monday’s shootout.

Without elaborating on what he did at the time, Strate called Hurley, of Golden, a ‘true hero who likely disrupted what could have been a larger loss of life.’

Witness Bill Troyanos told The Denver Channel it was Hurley who shot the gunman after making sure bystanders in the area were safe.

Troyanos said he was working at a store when Hurley walked in just before 1.15pm on Monday.

After just a few minutes of looking at the merchandise, Hurley heard gunshots and saw the gunman outside. Troyanos said Hurley then drew his gun that he had in a holster, rushed out of the store and ran toward the gunfire.

‘He did not hesitate; he didn’t stand there and think about it,’ Troyanos told the station. ‘I just want to make sure his family knows how heroic he was.’

According to Troyanos, Hurley confronted Troyke and fired five or six shots at him, causing the gunman to collapse against a parked car.

A manager at another nearby business told the station that prior to the shooting, he heard Hurley urging bystanders to seek shelter.

‘He turned back and looked towards everybody at the restaurant and told us that he [the gunman] is coming, that he is coming back and that we should get inside,’ the manager said.

Arvada police spokesman Dave Snelling declined to say who shot the suspect, saying that would be something investigated by a team of area law enforcement officers.

The city of Arvada hosted a vigil on Tuesday night at Peace Lutheran Church just west of the Olde Town district.

According to his Facebook page, Hurley was a classically trained cook. Until recently, he had been working for a catering company. After the business declared bankruptcy, Hurley took on jobs at a piano-moving company and an arcade, reported Fox 31.

Long-time friend Cody Soules described him in a statement as ‘an outspoken activist’ who wanted to help people in his community.

‘Johnny was the kind of guy that would think of everyone but himself first, always,’ he said.

A GoFundMe campaign has been launched to help Hurley’s family, including his parents and sister. It has raised over $47,000 so far.

Police in Arvada, Colorado, were called to reports of gunfire at around 1:30pm on Monday

Beesley was a school resource officer with a reputation for taking a compassionate approach with students.

With school out for the summer, Beesley was working on patrol when he was hit by gunfire shortly after a report of a suspicious incident that police also have not described.

Beesley was a 19-year veteran of the Arvada Police Department, working as a patrol officer and as a motorcycle traffic officer before working as a school resource officer. He is survived by wife Karen and their two children.

According to his school resource officer biography, he played the drums in a band and enjoyed hiking, biking, skiing, and camping with his family. His motto was ‘Look for the good in every day.’

While working at Oberon Middle School, Beesley tried to help students who got into trouble from being prosecuted with crimes and reminded them and their parents that they would get through any problems they had, school counselor David Ruppert said.

Beesley once convinced a student he worked with who did not want to go to school to get out of his car and attend classes, Ruppert said.

‘The kids gravitated toward him. They looked at him as someone I can go to,’ Ruppert said.

John Garrod, of Arvada, stands holding a pro-police blue line flag at the beginning of a line of about 30 police cars on Monday

People line the street in Arvada, Colorado, with flags during a procession in honor of Officer Beesely

Spencer Tscherpel, left, and his wife Paige, who live in the neighborhood, embrace as they watch police officers line up for a procession honoring Beesley

In 2015, Beesley began biking to school alongside a seventh grader with developmental delay after learning that he was really interested in bicycles but that his mother did not want him riding alone, according to a KUSA-TV story.

Ruppert was one of about 30 school staff members who walked from the scene of the shooting to the growing makeshift memorial for Beesley that was created outside the police department and city hall. Flowers were piled on top a police cruiser and bicycle festooned with US flags and balloons.

After Beesley was killed Monday, about 100 people — some holding American flags and pro-police flags — gathered as procession of police cars and motorcycles escorted the hearse carrying Beesley’s body to the coroner’s office.

According to court records cited by The Denver Post, Troyke was convicted of third-degree assault in 1992 and DWI in 1994. He was evicted from his home the following year, and in 2013 he declared bankruptcy.

There is no indication that Troyke had had any major run-ins with the law over the past 17 years.

Is It That Traders Are Not Willing Dogecoin Price To Reach $1? 2021

Larry Elder: Vice President Harris, when will you talk about the ‘root cause’ of homicides in our cities?

Larry Elder: Vice President Harris, when will you talk about the 'root cause' of homicides in our cities?