The family of a close friend of Prime Minster Scott Morrison were so concerned with his obsession with the QAnon conspiracy theory that they contacted a national security hotline more than once.

Tim Stewart, who had been friends with the prime minister since the 1990s, was banned from Twitter for engaging in ‘coordinated harmful activity’.

He also ran a blog on which he claimed ‘elites’ in Western nations were running a paedophile ring ‘designed to harvest children’s blood’.

Monday night’s ABC Four Corners program examines the beliefs of Mr Stewart, his family’s reaction to his increasing obsession with QAnon, and his relationship with Mr Morrison. 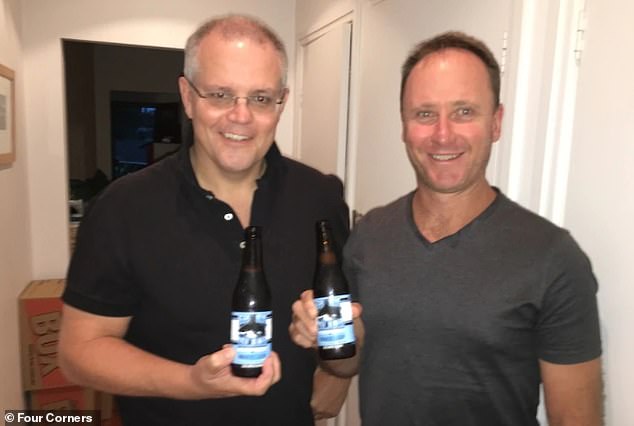 Tim Stewart (right) had known Scott Morrison since the 1990s, before his radicalization by QAnon

The airing of the program was controversially delayed by senior ABC news figures, with managing director David Anderson telling a Senate estimates hearing last week that he had ‘queries and concerns’ about the program.

Mr Morrison was also asked about the program in a press conference.

‘I find it deeply offensive that there would be any suggestion that I would have any involvement or support for such a dangerous organisation,’ Morrison told the media.

‘It is also disappointing that Four Corners would seek to cast this aspersion not just against me but members of my own family. I just think that is really poor form.’

Questions about the friendship of Mr Morrison with Mr Stewart increased when it was revealed that Mr Stewart’s wife, Lynelle, who had been friends with the Prime Minister’s wife, Jenny, since they were teenagers, was given a security clearance in mid-2019 to work as an attendant at the PM’s Sydney residence, Kirribilli House.

It is not suggested, however, that Mr Stewart’s wife posed any security risk. She also did not raise the alarm about his views as his mother and sister did. 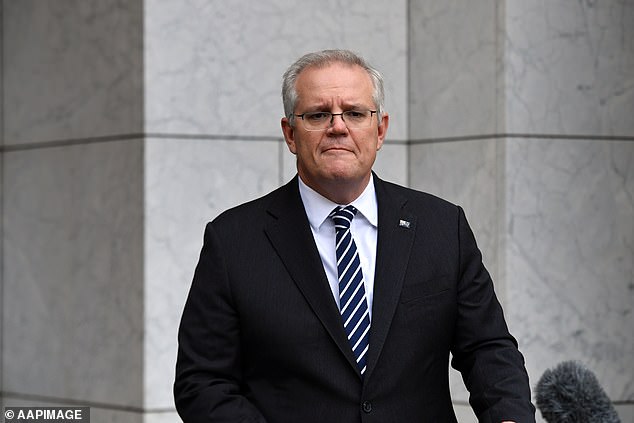 Prime Minister Scott Morrison responded to a question about the Four Corners program on his friend Tim Stewart at a press conference at Parliament House on Friday, June 4.

QAnon gained worldwide prominence during the Trump presidency. The conspiracy theory makes many different assertions but chief among them is that ‘leftist’ politicians, celebrities and elites are satanic paedophiles who operate through a ‘deep State’.

‘The true nature of these crimes shows that humans are being treated as a commodity and human energy is being harvested without permission,’ Mr Stewart wrote on his blog.

‘Furthermore, it is focused on children, who are more innocent and unaware…

‘Why do evil people wish to rob a young child of their virginity? … Why do they drink blood? Why do they need to sacrifice humans?’

Mr Stewart’s sister Karen tells the program that her brother believes the world had been taken over by this supposed group of people.

Among his more radical beliefs, she said, Mr Stewart believed he could talk to cockroaches and that both former American first lady Michelle Obama and New Zealand Prime Minister Jacinda Ardern were really men. 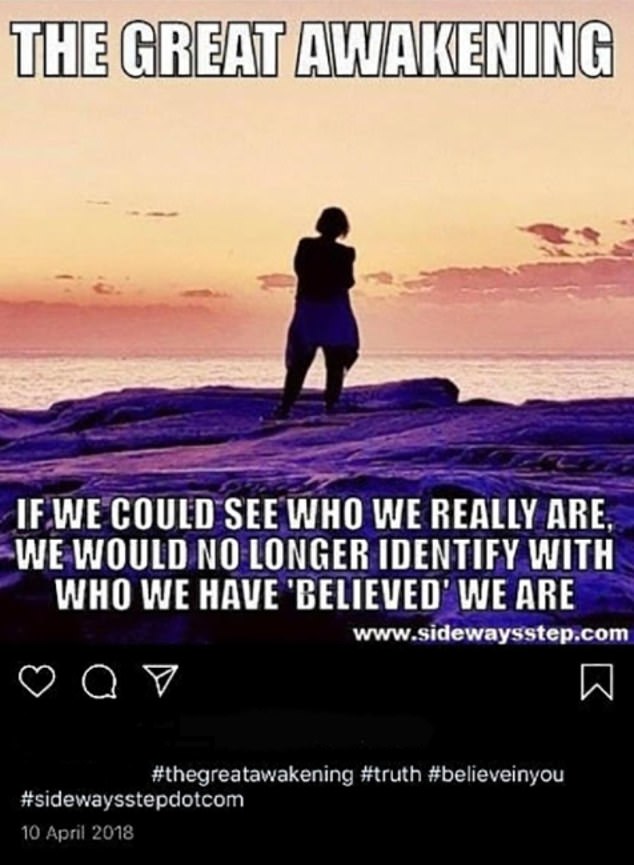 A 2018 post from Mr Stewart’s Sideways Step blog. The title of tonight’s episode of Four Corners is ‘The Great Awakening’

Ms Stewart said her brother told her that if people wore red shoes, it’s so they could disguise the splatter of blood from slaughtered babies as it falls to the ground.

He also supported online the theory that last year’s US election was stolen from Donald Trump via his blog, Sideways Step.

‘Tim believes that the world has really been taken over by satanic paedophiles, or Luciferian paedophiles,’ Karen told Four Corners.

‘I don’t understand why the PM would want to be seen to be with someone who has such radical beliefs.’

Ms Stewart said her family felt it was their ‘civic duty’ to report the radicalisation of her brother by the QAnon conspiracy community.

‘I’m not a psychologist, I’m his mum and I hope that one day, some of this might be in the past,’ his mother Val said.

‘But I know that there are just concerns that we would have in hearing and watching some of what has happened over particularly this last year or so.’

Karen, a candidate for The Greens, said disagreements over her brother’s extreme views tore their family apart.

‘I think almost all of us have broken down on the phone trying to explain the loss of a family member,’ she said.

‘And I know my mother has viewed it, she’s described it as grieving. Grieving the loss of someone who’s still alive and that’s – it’s a very confusing emotion.’ 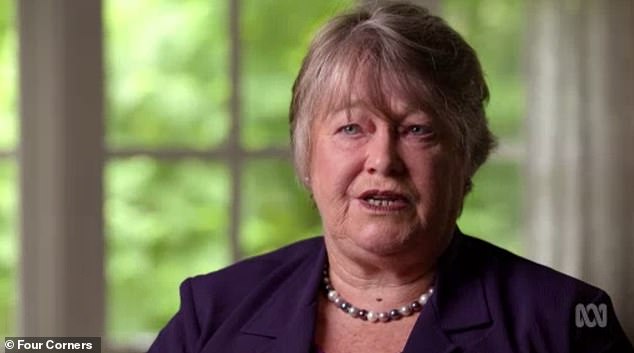 The program includes an interview with Miles Taylor, former chief of staff of the US Department of Homeland Security, who urged Mr Morrison to condemn Qanon.

‘It wasn’t just a law enforcement concern, we started to view it as a real national security threat,’ Mr Taylor said of QAnon.

‘I think it’s important for the prime minister and any other national leader to disavow individuals either within their orbit or outside of their orbit who harbour these types of extremist views.’

QAnon flags and insignia were seen during the January 6 attack on the US Capitol building earlier this year. The ‘QAnon shaman’, Jake Angeli, who stormed the building with a US flag and a horned fur hat, became an instant symbol of the movement.

There had been speculation over whether Mr Stewart wielded any influence over the prime minister since he claimed Mr Morrison’s use of the word ‘ritual’ in the 2018 parliamentary apology to survivors of institutional sex abuse reflected QAnon beliefs.

Tim Stewart responded to questions from Four Corners by describing reports about him as ‘hit pieces’.

‘I am too busy to read questions relating to the nonsense that’s been put out there, which are just hit pieces,’ he said.

In a statement to the program, the Mr Morrison said its focus was ‘a politically motivated slur’.

‘This is a politically motivated slur against the prime minister and his family by a Four Corners program that is already facing serious questions about the accuracy, bias and credibility of its journalism,’ a statement from his office said.

‘[It] is now giving credence to irrational Twitter conspiracy theorists and raising the profile of what the Prime Minister clearly deems a discredited and dangerous fringe group.’

Euro 2020: England put a smile on our faces against Croatia - Alan Shearer

From COVID to playoffs, these 10 questions remain to be answered

MIAMI (CBSMiami) – Twin sisters Delaney and Hadley Robertson are busy young ladies who are about...