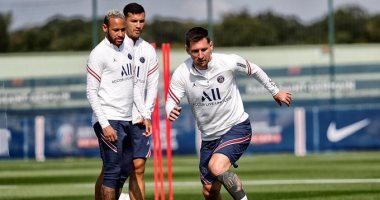 Football fans and fans around the world are waiting for the appearance of the Argentine star Lionel Messi with Paris Saint-Germain, the first with the team in the Champions League competitions in the Saint-Germain shirt.

And the French newspaper, L’Equipe, revealed that Lionel Messi and Neymar will join the squad against Club Brugge, in the match scheduled for tomorrow, Wednesday, at nine in the evening, at Jean Bridal Stadium in Belgium, after they were absent from a match in the French League.

Neymar began his season with Paris against Stade Reims on August 29, the match in which Messi began his career with the team, when he participated as a substitute in the second half.

A number of the most prominent stars accompanied by Messi appeared in the announcement of the third shirt of the Paris Saint-Germain team, including Kylian Mbappe, Neymar da Silva and Kimpembe.