Coca-Cola is world’s worst plastic polluter for third year in a row, followed by Nestle and PepsiCo

Coca-Cola has been named the world’s worst plastic polluter for the third year in a row, followed by fellow non-movers PepsiCo and Nestle.

An annual audit by environmental group Break Free From Plastic collected almost 350,000 pieces of plastic from 55 countries, finding that Coca-Cola products – including brands Fanta and Sprite – were by far the most common branded plastic found.

Coca-Cola’s plastic waste was more than the combined total from the second and third most common brands found, Nestle (8,633) and PepsiCo (5,155). 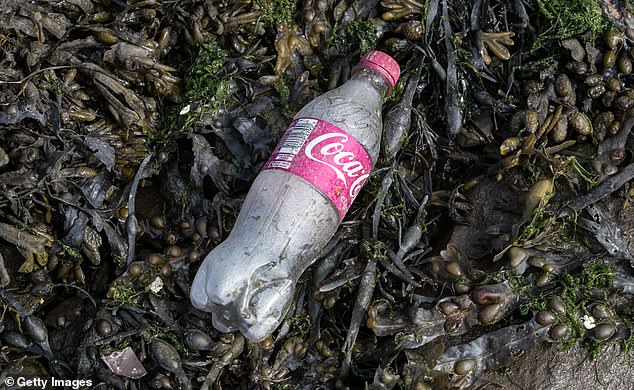 An annual audit by environmental group Break Free From Plastic collected almost 350,000 pieces of plastic from 55 countries, finding that Coca-Cola products – including brands Fanta and Sprite – were by far the most common branded discarded plastic litter. Pictured: A Coca-Cola bottle on a beach in Plymouth, UK [File photo]

Greenpeace Southeast Asia said it was unsurprising that these mammoth brands were the worst offenders three years in a row.

‘These companies claim to be addressing the plastic crisis yet they continue to invest in false solutions while teaming up with oil companies to produce even more plastic,’ Abigail Aguilar, Plastics Campaign Regional Coordinator, Greenpeace Southeast Asia, said in a Break Free From Plastic press release.

‘To stop this mess and combat climate change, multinationals like Coca-Cola, PepsiCo, and Nestle must end their addiction to single-use plastic packaging and move away from fossil fuels’.

They delivered a huge model of the brand’s logo of a bird and its chick in a nest but had stuffed the nest with plastic waste. 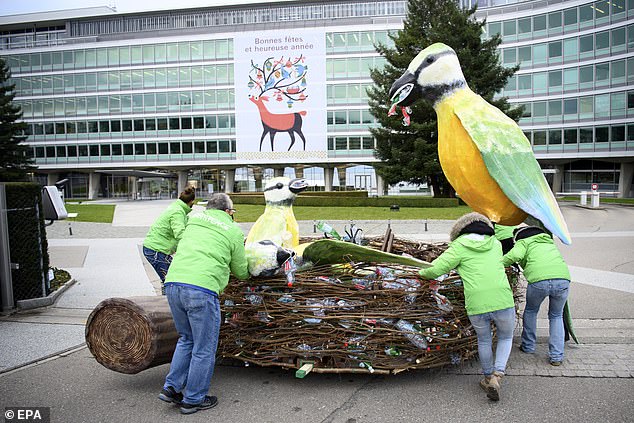 On Tuesday, Greenpeace activists protested outside Nestle’s Vevey, Switzerland headquarters. They delivered a huge model of the brand’s logo of a bird and its chick in a nest but had stuffed the nest with plastic waste 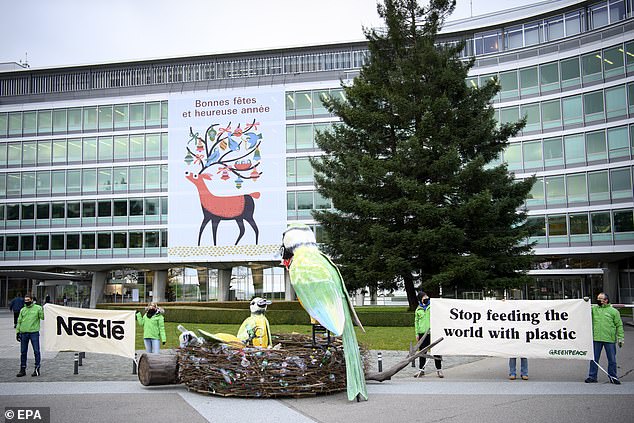 Break Free From Plastic enlisted the help of 15,000 local volunteers to survey plastic waste found at beaches, parks and on city streets in countries including Colombia, South Korea, Tanzania and Spain.

Of the 346,494 pieces of plastic waste collected, 63% were marked with an identifiable brand. More than 5,000 different brands were identified in the audit.

‘The world’s top polluting corporations claim to be working hard to solve plastic pollution, but instead they are continuing to pump out harmful single-use plastic packaging.

‘Coca-Cola, PepsiCo, and Nestle should be leading the way in finding real solutions’. 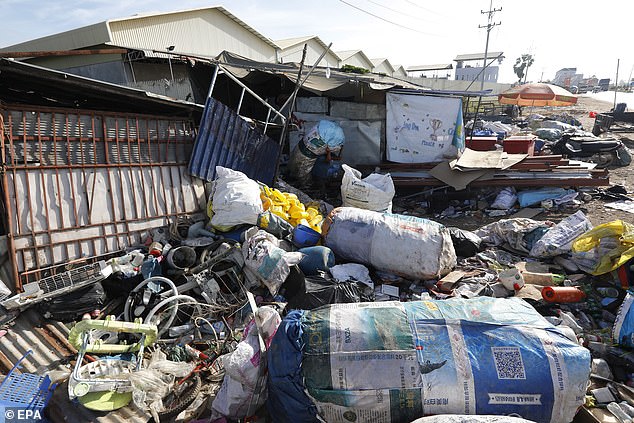 Despite recycling efforts, vast tonnes of plastic waste continues to end up in landfill, the ocean or an incinerator. Pictured: Refuse, including recyclable plastic waste, at a dumpsite on the outskirts of a Cambodian city in November [File photo]

A Coca-Cola spokesperson told The Independent that the company was ‘making progress’ with regards to plastic waste, including introducing bottles with 100% recycled plastic into 18 of its markets.

‘Globally, we have a commitment to get every bottle back by 2030, so that none of it ends up as litter or in the oceans, and the plastic can be recycled into new bottles,’ the spokesperson said.

PepsiCo said packaging had ‘no place in the environment,’ adding that the company was aiming to cut its use of single-use plastic by 35% over the next five years.

‘We have a multi-faceted approach to drive both immediate and long term progress – reducing the plastic we use, increasing recycling rates and building an economy for recycled material,’ a spokesperson told The Independent.

In a statement provided to the Mail Online, Nestle said the reported highlighted ‘the continued challenges we face as a society and the responsibility we have to act,’ adding that the company wanted to be ‘part of the solution’.

‘Our aim is to ensure that by 2025 100% of our packaging will be recyclable or reusable and to reduce our use of virgin plastics by one-third.

‘We have a huge amount of work to do but we can’t do it alone. We want to continue to work with our peers to build new partnerships, drive new innovations and to work with the government to create a level playing field,’ the statement read.

‘We’ve already made some progress to find solutions, we’ve recently joined forces with Jacobs Douwe Egberts UK to launch a cross-industry coffee pod recycling scheme which will launch early in 2021.

‘We have also started a collaboration with waste management business, Biffa, who will help create the recycled plastic for our Buxton water bottles. This year Smarties sharing block also launched in recyclable paper packaging. We will continue to work across our business to find solutions for this shared problem.’

Plastic production comes at a huge environmental cost. Made from fossil fuels, plastic products are then manufactured, distributed and purchased by consumers.

Even with recycling efforts, vast tonnes of plastic waste continues to end up in landfill, the ocean or an incinerator.

According to data included in Break Free From Plastic, only 9% of plastic ever produced has been recycled.