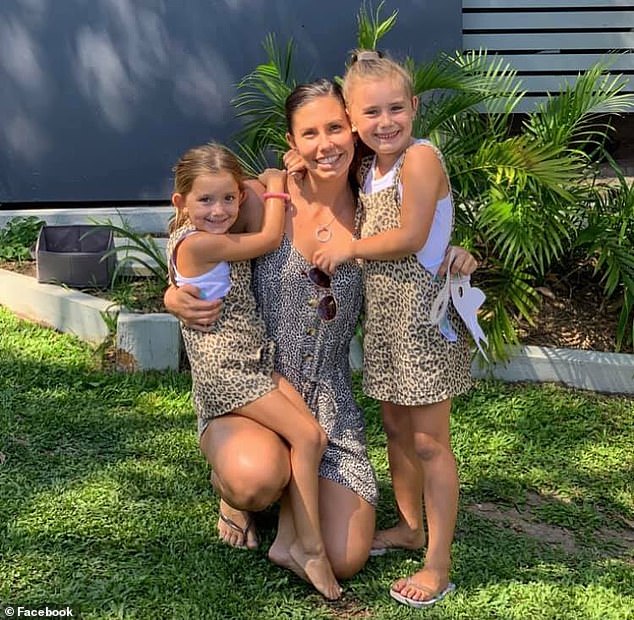 Queensland has taken the first step towards criminalising coercive control by abusive partners, in memory of murdered mum Hannah Clarke.

Premier Annastacia Palaszczuk announced on Wednesday she had established a task force to consult with survivors of domestic, family, and sexual violence to better understand the needs of victims.

The task force will report back to the government with its findings in October, when Ms Palaszczuk hopes to pass laws to criminalise the behaviour.

Ms Clarke, 31, was doused in petrol and set alight alongside her three children by her possessive estranged husband, Rowan Baxter, a year ago on Friday.

Six-year-old Aaliyah, her four-year-old sister, Laianah, and three-year-old brother Trey all died at the scene.

Hannah Clarke is pictured with her two daughters Aaliyah, six, and Laianah, four

Pictured: Hannah with her son, Trey, who was particularly affectionate and a ‘mummy’s boy’

Hannah bravely detailed the attack to police twice before succumbing to burns covering 97 per cent of her body.

As bystanders tried to rescue Hannah and her three babies, Baxter brandished a knife and told witnesses to ‘let her burn’ before fatally stabbing himself.

She had recently separated from him and learned she was a victim of coercive control. Since her death, her parents Lloyd and Sue Clarke have been staunch advocates against the form of abuse.

Coercive control is categorised as an insidious form of family violence which slowly restricts victims and strips them of their power within a relationship.

In Hannah’s relationship, Baxter dictated what she could and couldn’t wear, would go through her phone and limited the time she could spend with friends and family.

Offenders also often seize control of their victim’s finances, though this wasn’t the case with Hannah because Baxter was not smart enough to handle the money.

Hannah’s parents Lloyd and Sue are pictured with two of their grandchildren. The grieving couple are speaking out as a reminder that domestic violence can happen in any postcode and any class

Ms Palaszczuk said she was determined to ensure the tragedy that occurred on February 19, 2020 never repeats itself in Queensland again.

‘Coercive control, like other forms of domestic and family violence, needs to be everybody’s business,’ she said in a statement.

‘We’ve seen legislation against coercive control in places like the UK, and it’s important that we too have legislation in place to better protect victims.’

The task force will be chaired by Margaret McMurdo, who will eventually recommend how best to legislate against coercive control in parliament.

The announcement comes as Lloyd and Sue Clarke revealed how they would honour Hannah and their grandchildren on the anniversary of their deaths this Friday.

The Clarke’s will light a candle to represent Hannah, Aaliyah, Laianah and Trey on Friday afternoon, and have encouraged the public to do the same.

WHAT IS COERCIVE CONTROL?

Coercive control is an ongoing and insidious form of domestic violence which is less often spoken about or recognisable.

A victim of coercive control often has their rights and civil liberties slowly stripped in a manner that mightn’t appear as aggressive as physical abuse.

The abuser uses strategies to control their victim in aspects of their lives, from telling them who they can and can’t speak to, where they can go, what they can wear and how they can spend their money.

The abuse is illegal in several countries, but has been largely overlooked in Australia.

Hannah Clarke’s death brought the conversation to the forefront of national and public interest.

Almost a year on, Hannah’s parents Sue and Lloyd are campaigning for coercive control laws to be implemented in Australia. If they were earlier, they have no doubt their daughter could still be alive.

If Hannah was living in Scotland, where coercive control is a crime, Baxter ‘would have been in jail and Hannah and the kids would have been alive,’ Lloyd explained.

In an unofficial test they conducted comparing Baxter’s behaviour to a checklist of coercive control patterns in Scotland, he was guilty of almost all of them.

‘All of them except anything to do with finances, basically,’ Lloyd said. ‘He was pretty useless with finances.’

At the end of the checklist, the data found Baxter was ‘a 900 per cent chance of hurting Hannah’.

‘If we can come up with our own law like this in Australia, it could save so many victims.’

The primary indicators of coercive control according to healthline are:

While coronavirus restrictions have limited the family’s ability to put together a public tribute, they are urging the public to keep Hannah and her children in their thoughts on Friday.

Under Queensland’s current Covid guidelines, any events must first be approved and adhere to a stringent Covid-safe plan.

Gatherings are limited to 50 people indoors and 100 people outdoors.

Given the widespread outrage in the wake of their deaths, Hannah’s parents opted against planning a public service which would potentially exclude people who wanted to pay tribute.

The purpose of lighting candles is to remember the late family as ‘bright, happy people who brought light to everyone they met,’ Mrs Clarke explained.

Her husband said the ‘light’ will come after ‘our family and friends have been through some pretty dark times in the last 12 months’.

‘As the sun goes down we invite you to light a candle for them and for all victims of domestic and family violence,’ Mr Clarke said.

Mrs Clarke also encouraged religious people to pray for a ‘lighter and happier world’ and to help ‘keep the flame burning until there is no more darkness’.

A year on from the crime which shocked the nation, Hannah’s parents are still fighting for coercive control laws to be introduced to support other victims.

While Hannah was struggling, both she and her parents hadn’t heard the phrase coercive control in the past, and weren’t aware that she was a victim of it in her own household.

A year on from the crime which shocked the nation, Hannah’s parents are still fighting for coercive control laws to be introduced to support other victims

This Friday, Lloyd and Sue Clarke will light a candle to represent each of the lives lost on February 19, 2020

They hope that further legislation and government campaigns will help to raise public awareness about the issue.

Shannon Fentiman, Queensland’s Minister for Women, has vowed to implement changes in the law within the next four years.

She said authorities will undergo training and there will be a public education campaign to support changes made to the law.

A year on from the crime which shocked the nation, Hannah’s parents are still fighting for coercive control laws to be introduced to support other victims

Five days before six-year-old Aaliyah Clarke was set alight by her father alongside her mum Hannah and younger siblings, she had ‘the best day of her life’ at Sea World.

Hannah Clarke and her three children were slowly rebuilding their lives after the 31-year-old left her abusive husband, Rowan Baxter.

On February 15, Lloyd and Sue surprised the children with a trip to Sea World on the Gold Coast.

Hannah, Lloyd and Sue made the hour-long trip from their home in Brisbane on a stinking-hot Saturday and met up with Hannah’s brother Nat and his wife Stacey, along with their two boys.

Aaliyah, Laianah and Trey relished in spending time playing with stingrays and staring at the dolphins with their cousins.

‘Aaliyah told us it was the best day of her life afterwards,’ Lloyd said. ‘She was so happy.

‘They all were, all the cousins were together. They were all so excited to see the dolphins and stingrays,’ Sue added.

The doting grandparents were so moved by her response that they bought family season passes.

The ‘smart little cookie’, as Aaliyah’s grandparents Lloyd and Sue Clarke affectionately remember her, spent hours staring at the dolphins and playing with stingrays at Sea World on the Gold Coast

Trey had a particular love of animals, everything from sea creatures to dinosaurs, and was fascinated by everything he saw at the theme park.

But what could have been is still gut-wrenching.

‘They only got to see Sea World,’ Lloyd said. ‘The season passes got them into the four parks. We hadn’t got to them yet.’

Both Aaliyah and Laianah had birthdays coming up in March and April. They would have turned seven and five, and the Clarke family planned to take them to the theme parks for their special days.

They’ve been back several times since the February 15 trip with Nat and his boys, but often think back to the ‘special day’ they had when the whole family was together.

Five days before six-year-old Aaliyah Clarke was set alight by her father alongside her mum Hannah and younger siblings, she had ‘the best day of her life’ at Sea World (pictured left with her brother Trey and sister Laianah)

Canada records the first case of the Brazilian Corona