Blown a casket! Coffin-making factory burns to the ground ‘after being struck by lightning’ in Northern Ireland

A major fire broke out at a coffin-making factory in Northern Ireland today after the building was reportedly struck by lightning.

The Northern Ireland Fire and Rescue Service said efforts to quell the blaze at O’Doherty and Sons Coffin and Casket manufacturers in Railway Street, Strabane, are likely to continue into Monday.

Around 80 firefighters have been dispatched to tackle the fire, with the public urged to avoid the area.

‘NIFRS are continuing to deal with what was a substantial fire at a commercial premises, Railway Street Strabane,’ the Fire Service said in a statement on Sunday.

‘There are currently 10 pumping appliances and four specialist vehicles in attendance with approximately 80 firefighters. Operations are expected to continue into tomorrow.

‘The public are asked to avoid the area due to high level of activity and also keep windows and doors closed. NIFRS received notification of the fire at 1610hrs, cause is currently under investigation.’ 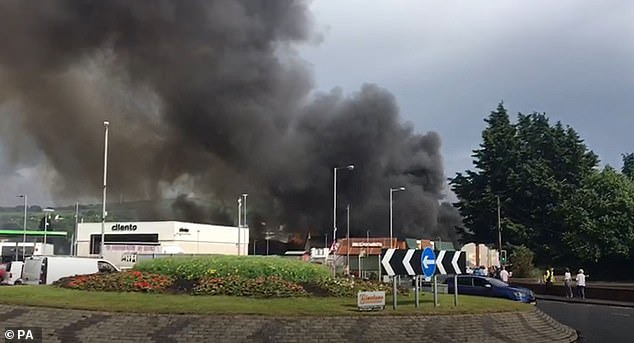 The Northern Ireland Fire and Rescue Service said efforts to quell the blaze at O’Doherty and Sons Coffin and Casket manufacturers in Railway Street, Strabane, are likely to continue into Monday

The PSNI have urged the public to avoid the area.

A statement said: ‘Police are advising the public that due to a fire on Railway Street in Strabane, they should avoid the area to allow emergency services to deal with the blaze.

‘Our officers are at the scene, please follow their directions.’

‘Residents across this area of the town keep doors and windows closed. Please comply with the fire service and stay away from the area.’

Sinn Fein MLA for Foyle Martina Anderson shared a video of the incident on Twitter with the caption ‘Struck by lightning!’

No injuries have been reported.

Earlier on Sunday, the Met Office issued a yellow weather warning for the area, which mentioned a risk of lightning strikes. 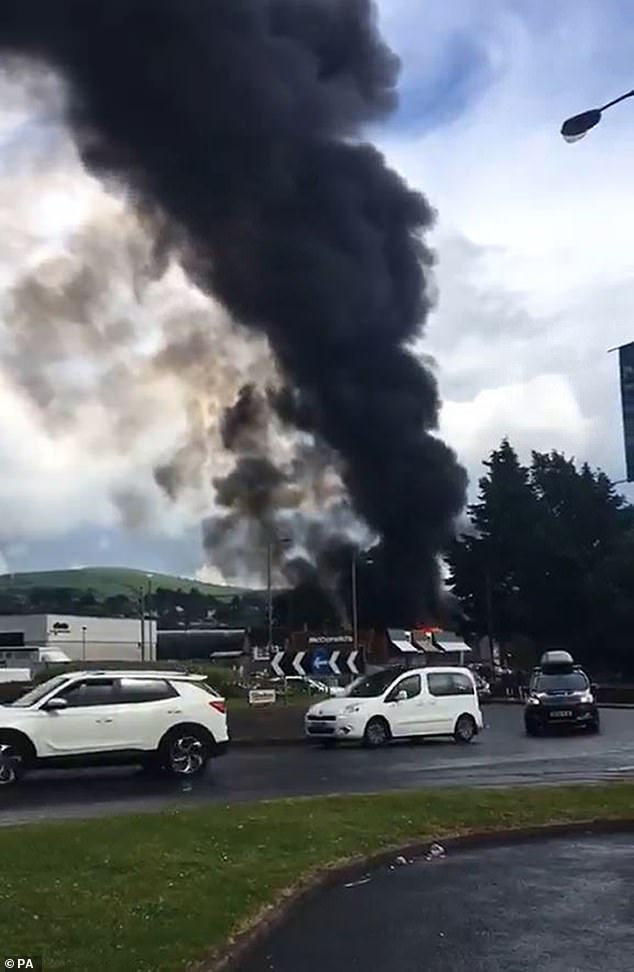 Around 80 firefighters have been dispatched to tackle the fire, with the public urged to avoid the area 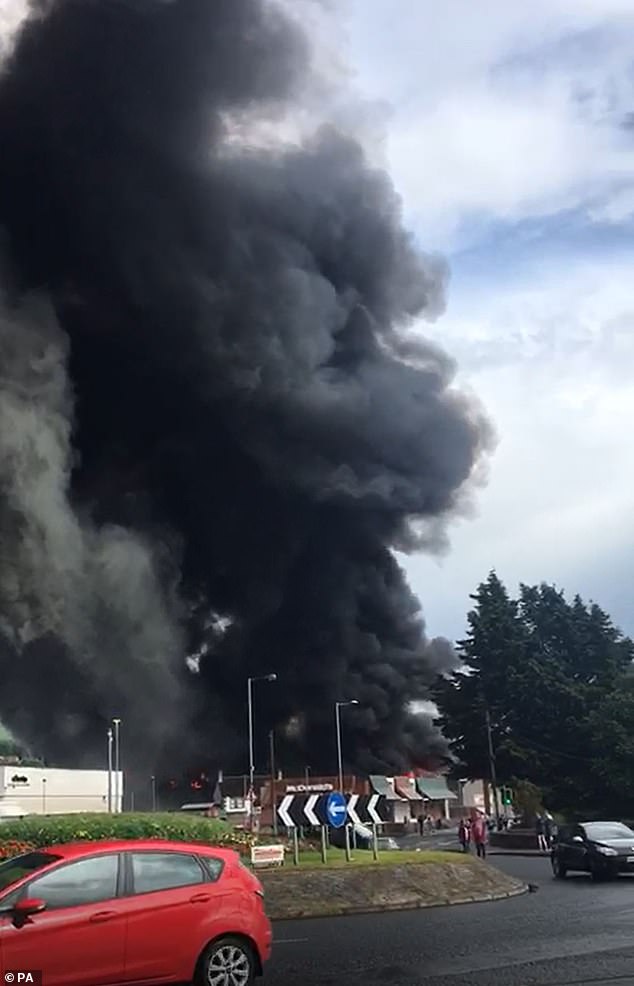 Earlier on Sunday, the Met Office issued a yellow weather warning for the area, which mentioned a risk of lightning strikes

It said: ‘There is a small chance that homes and businesses could be flooded quickly, with damage to some buildings from floodwater, lightning strikes, hail or strong winds

‘Where flooding or lightning strikes occur, there is a chance of delays and some cancellations to train and bus services.’

He said: ‘We’re dealing with a number of floods here at the moment in the city. I know there’s a major fire. It’s mad here at the minute. We’re having severe heavy rain, a lot of local flooding.’

‘Thankful to the fire service as they seek to bring the blaze under control, and my thoughts are with the businesses and workers impacted.’

Charles O’Doherty & Sons is an independent family business that has been operating in the area for more than a century after being established in 1908.

Its website says: ‘The business originally built horse-drawn carts and traps and then evolved to coach building with the advent of the combustion engine.

‘When coffin manufacturing was introduced the second generation continued to manage both businesses.

‘Today the company concentrates solely on coffin manufacturing, providing a high level of craftsmanship quality and professionalism to all its customers.’