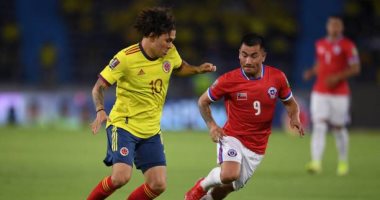 Colombia won a valuable victory over its guest Chile 3-1, in the meeting that brought them together in the early hours of Friday morning, at the “Metropolitano Roberto Melendez” stadium, as part of the tenth round of the South American qualifiers for the 2022 World Cup in Qatar.

Colombia ended the first half of the match with a clean double, scored by Miguel Borja in the 19th and 20th minutes, the first came from a penalty kick, and VAR canceled a third goal for the Colombian team in the sixth minute.

In the second half, the Chilean team scored its only goal in the match through Jean Menses in the 56th minute, and Luis Diaz concluded the Colombia hat-trick in the 74th minute.

Colombia raised its score to 13 points to occupy fifth place, equal with Ecuador, who is in fourth place, with a goal difference, while Chile’s balance stopped at 7 points in eighth place, and Brazil leads with 21 points.

Uruguay defeated its Ecuadorean side with a clean goal, in the match that brought the two teams together in the early hours of Friday, at the Centenario Stadium, as part of the tenth round of South American qualifiers for the 2022 World Cup in Qatar.

Paraguay also beat its host Venezuela, 2-1, in the match that brought them together at the “Defensores del Chaco” stadium.