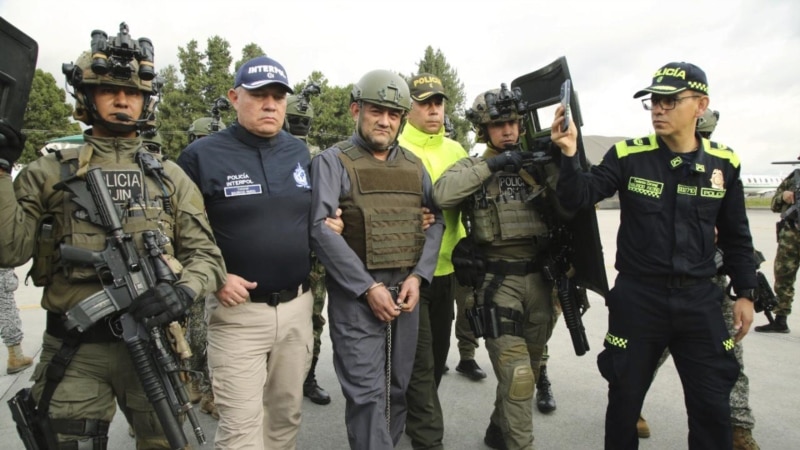 Colombia extradited to the United States on Wednesday the alleged leader of the feared Gulf Clan, who had been the country’s most wanted drug trafficker before his capture, where he faces charges in three federal courts.

Colombian President Iván Duque has said that Dairo Antonio Úsuga David is “only comparable to Pablo Escobar,” referring to the late former head of the Medellin drug cartel.

“Not only is he the most dangerous drug trafficker in the world, but he is a murderer of social leaders, an abuser of children and adolescents, a murderer of police officers,” said Duque, accompanied by the Colombian military whom he congratulated for guarding Úsuga David. and capture it in October 2021.

The former rural warlord, better known by his alias Otoniel, had been on the run for more than a decade corrupting state officials and aligning himself with fighters from the left and right. He was transferred on Wednesday handcuffed and wearing a helmet and bulletproof vest from a prison in Bogotá to a heavily guarded military transport airfield.

He has long been a fixture on the U.S. Drug Enforcement Administration’s most wanted list. He was first indicted in 2009, in federal court in Manhattan, on narcotics charges and for allegedly providing assistance to a far-right paramilitary group designated as a terrorist organization by the United States government. Subsequent indictments in federal courts in Brooklyn and Miami accused him of importing at least 73 metric tons of cocaine into the US between 2003 and 2014 through countries including Venezuela, Guatemala, Mexico, Panama and Honduras.

Úsuga David also worked his way through the ranks of various guerrilla groups, most recently claiming to lead the Gaitanista Self-Defense Forces of Colombia, following a mid-20th-century Colombian leftist upheaval.

The Colombian government initiated the capo’s extradition after the Council of State lifted a provisional suspension of an order from Duque that endorsed the measure. The high court dismissed a petition from a group of Úsuga David victims who argued that his extradition would violate their rights to justice and reparation. They wanted him to first face the more than 128 processes against him in Colombia. .

Duque said that from the United States, Úsuga would continue to collaborate with the Colombian authorities in the investigations against him and once he completes his sentences for drug trafficking, he will return to “Colombia to pay for the crimes he committed.”

The Gulf Clan’s army of assassins terrorized much of northern Colombia to seize control of major cocaine smuggling routes through thick jungles north of Central America and into the US.

As he defied authorities for years, his legend as a bandit grew alongside the horror stories told by Colombian authorities about the many underage women he and his accomplices allegedly sexually abused.

Wasted two chances for Manchester City to qualify for the Champions League final .. The story of a tweet that Grelic deleted after 8 years | Football

Wasted two chances for Manchester City to qualify for the Champions League final .. The story of a tweet that Grelic deleted after 8 years | Football