The Loveland, Colorado cops seen celebrating and fist bumping while watching video of their violent arrest of a 73-year-old women suffering from dementia are in a romantic relationship, DailyMail.com can exclusively reveal.

Officer Austin Hopp, who brutally dislocated Karen Garner’s shoulder during the arrest on June 26, 2020 after she left Walmart without paying for a candy bar, a can of Pepsi and a t-shirt totaling $13.38, has been dating fellow police officer Daria Jalali.

The couple made the arrest in June and were seen on video hours later callously fist bumping and laughing while watching bodycam footage of the incident while the 73-year-old woman was suffering in a jail cell just feet away. Hopp, Jalali, and two other officers were placed on administrative leave and are now the subject of a criminal investigation.

Around the time of the arrest, then-married Hopp moved into Jalali’s new home in Windsor, Colorado where they lived together until mid-February when Hopp suddenly moved out.

Several neighbors of Jalali’s confirmed to DailyMail.com that Hopp and Jalali had been living together but kept to themselves and weren’t very friendly. 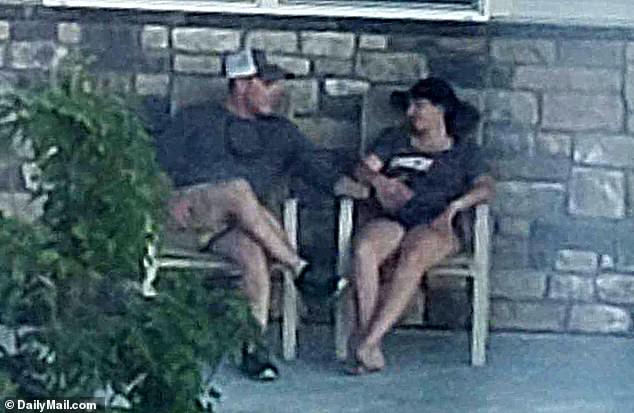 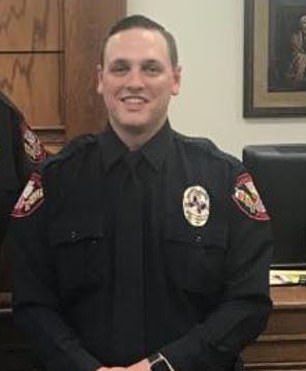 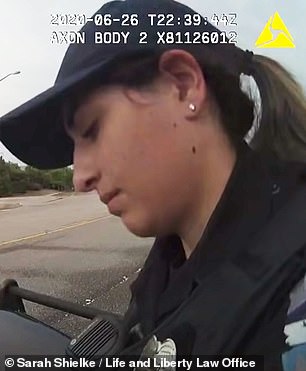 Several neighbors of Jalali’s confirmed to DailyMail.com that Hopp and Jalali have been living together but keep to themselves and aren’t very friendly 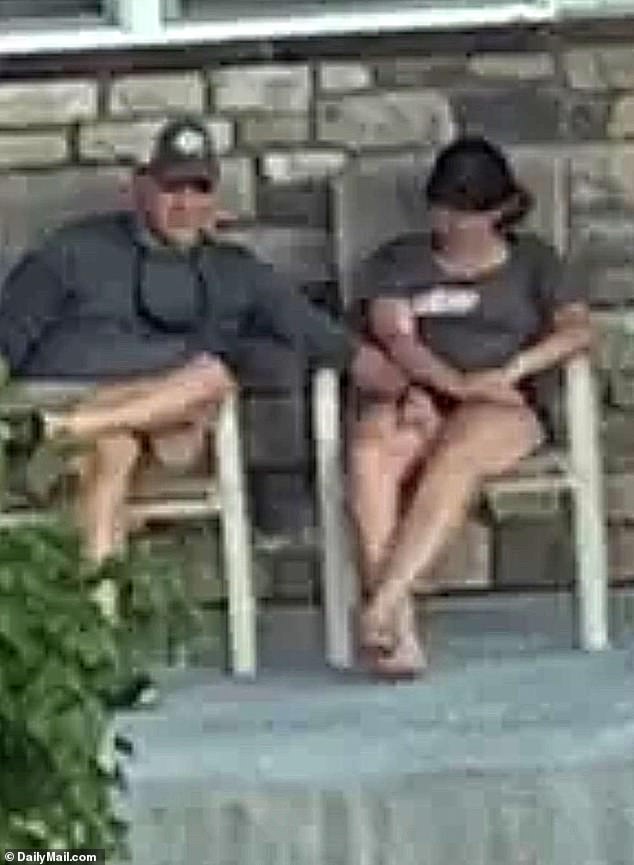 Exclusive pictures obtained by DailyMail.com taken last June show Hopp and Jalali sitting on the porch just days after they moved in together 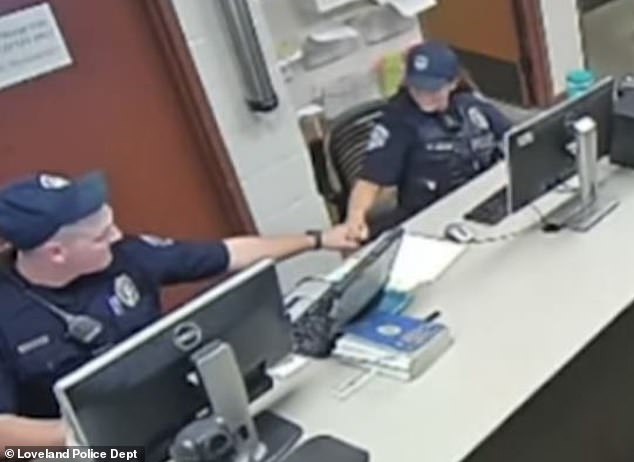 Hopp (left) and Jalali (right) appeared to exchange a fist bump after placing Garner in a cell. Before extending his hand Hopp asked Jalali if she’d turned her body-camera off 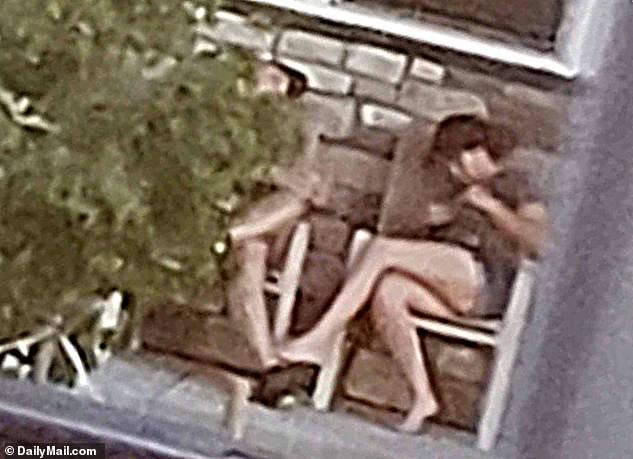 One neighbor who didn’t want to be identified said, ‘They mostly kept to themselves. The last time I saw either of them was just days before the news broke of the lawsuit they were involved in. I haven’t seen either of them around since’ 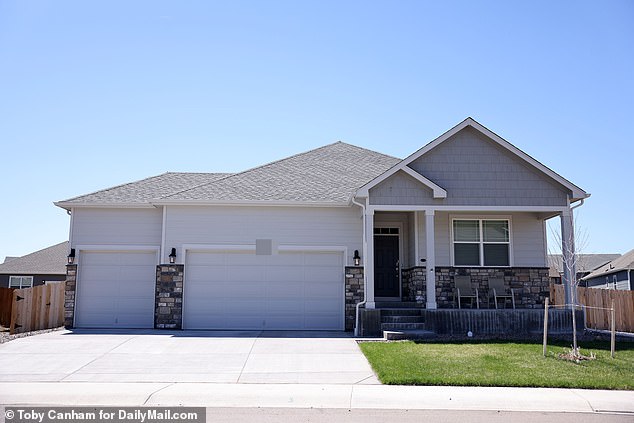 Soon after the arrest, then-married Hopp moved into Jalali’s new home in Windsor, Colorado where they lived together until mid-February when Hopp suddenly moved out

One neighbor who didn’t want to be identified said, ‘They used to park both of their police cars in the driveway of the house. I introduced myself to Austin but he wasn’t that friendly.

‘They mostly kept to themselves. The last time I saw either of them was just days before the news broke of the lawsuit they were involved in. I haven’t seen either of them around since.’

Another neighbor said Hopp and Jalali have been living together at the house since the day they moved in, last June.

Exclusive pictures obtained by DailyMail.com taken on June 14, 2020,  just days after they moved in together, show Hopp and Jalali sitting on the front porch and holding hands.

Hopp was dressed in shorts and a long sleeve t-shirt and sneakers wearing a baseball cap. Jalali wore sandals, a t-shirt and shorts.

The neighbor said, ‘They were all over each other, touching each other, laughing, kissing, and hugging right in the front yard. There are a lot of kids in this neighborhood and the amount of PDA was a little weird.’

‘They weren’t the most sociable people,’ continued the neighbor. ‘Several of the neighbors would invite them over for a beer but they never accepted.’

Another neighbor said someone called into the Loveland Police Department complaining about Hopp driving his patrol car in the neighborhood going over speed limit on several occasions.

It came to a head last year ‘on Halloween, while there were several kids and families out walking around the neighborhood trick or treating Austin sped out of the area going several miles over the speed limit.’

But a neighbor said their short-loved romance ended sometime in early February of this year. ‘

We saw Austin moving some boxes out of the house he shared with Daria and his patrol vehicle was no longer around.’ 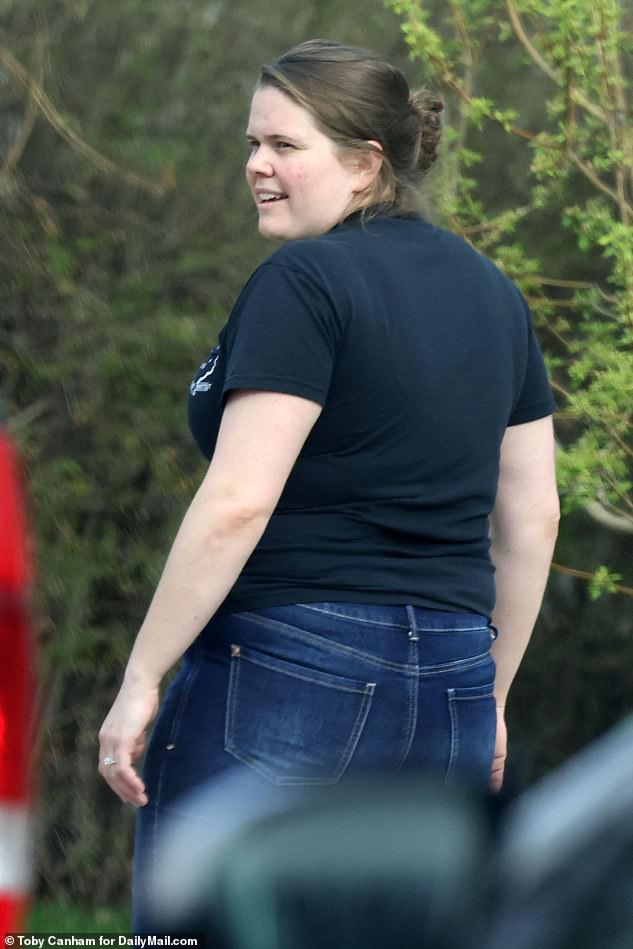 Hopp’s wife of six years, Melissa Kathryn Hopp (pictured), filed for divorce on July 8, 2020. According to the divorce documents exclusively obtained by DailyMail.com the couple separated on June 7, 2020 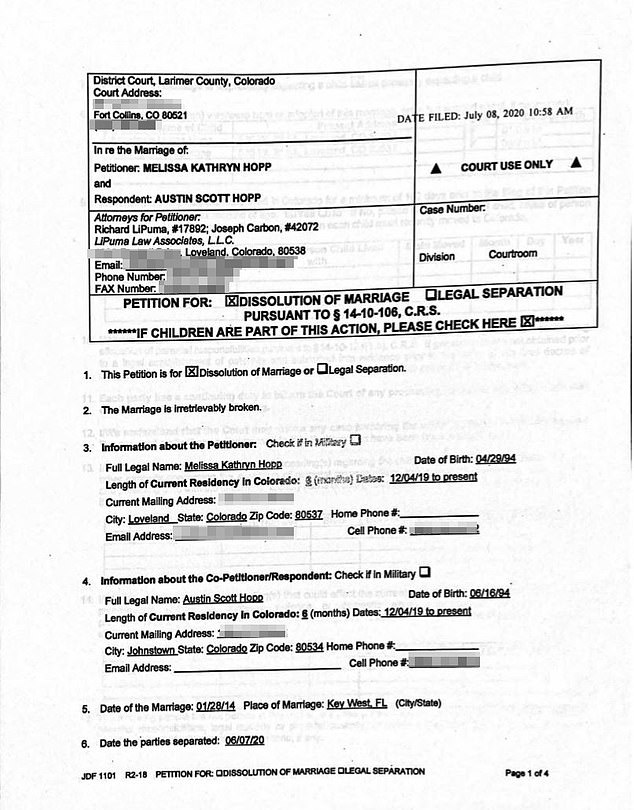 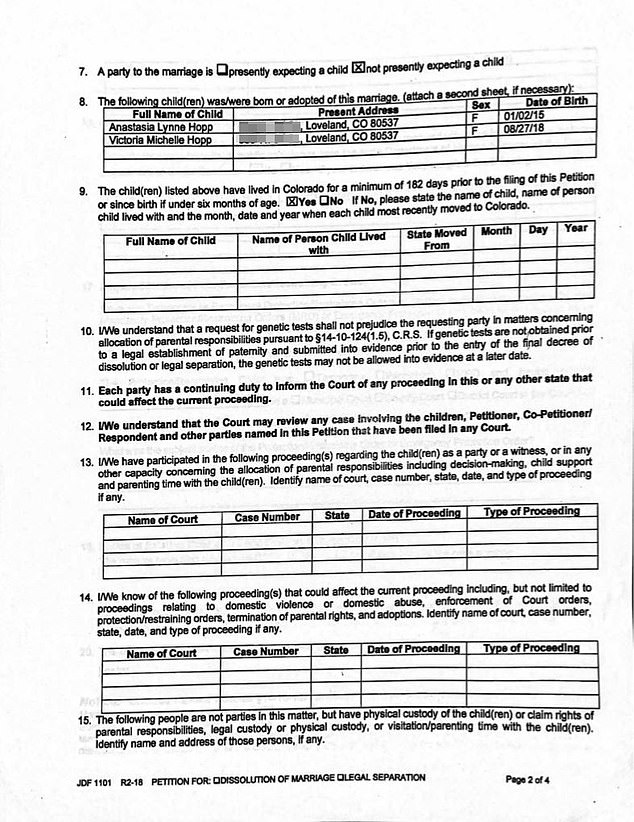 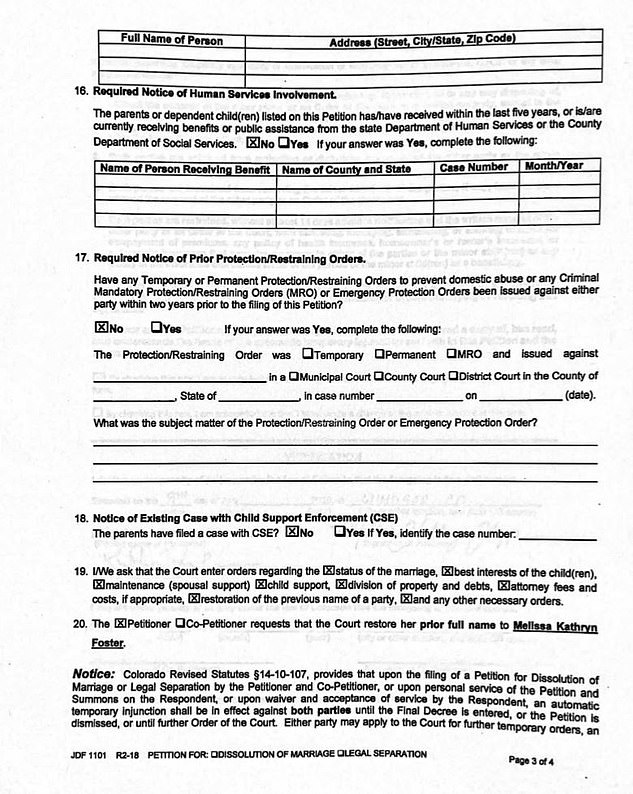 At times, according to their divorce filings, things got contentious. Hopp went through two different attorneys during his divorce proceedings, his last attorney only lasted seven days before she withdrew as his counsel. Hopp eventually acted as his own attorney

It wasn’t until April 14, 2021 that his personal truck showed back up at her house, but it was only for a few days.

Several days ago Jalali’s patrol car stopped showing up at her house, then one day a neighbor saw Jalali pull out of her garage in her black Toyota Corolla and she hasn’t been seen since, said the neighbor. 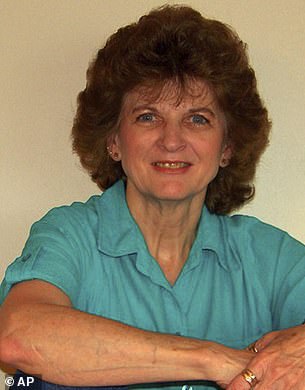 Garner (pictured in a photograph taken several years ago) is  five feet tall, weighs 80 pounds and suffers from dementia

This all happened about the time the news broke of the federal lawsuit filed against them.

Just three weeks after, Hopp and Jalali were photographed on their front porch canoodling.

Hopp’s wife of six years, Melissa Kathryn Hopp, filed for divorce on July 8, 2020. According to the divorce documents exclusively obtained by DailyMail.com the couple separated on June 7, 2020.

At times, according to their divorce filings, things got contentious. Hopp went through two different attorneys during his divorce proceedings, his last attorney only lasted seven days before she withdrew as his counsel. Hopp eventually acted as his own attorney.

In October 2020, according to court documents, his wife claimed that Hopp was not adequately supporting her and their children or paying household bills and martial debts and temporary are necessary.

In a motion for temporary orders filed in December 2020 Hopp’s wife, wrote, ‘At his request, Father has enjoyed parenting time from Sunday at 10:00 am until  Wednesday at 8:00 am, only during the third week of each month. Mother is concerned that the Father has no contact with the children for about four consecutive weeks each month. Mother has proposed 2 overnights for Father every other weekend, to allow more frequent interaction between Father and the Children. Father believes his proposal once-per-month is more convenient.’

Hopp and his wife were granted a divorce on December 22, 2020. Hopp has to pay his ex-wife, $800/month for maintenance and $1200 a month for their two daughters, ages now 6 and 3 years old according to court records.

Since Hopp hasn’t had any legal representation since September of last year, the court used his home address on the filings which is the same address where he shared a home with fellow police officer Daria Jalali.

DailyMail.com left several messages for Hopp but so far he has not replied. Attempts to reach Jalali were not returned.

DailyMail.com contacted Hopp’s ex-wife and asked if his romantic relationship with Jalali had anything to do with their divorce, Melissa Hopp responded, ‘No comment, I will never make a comment.’ 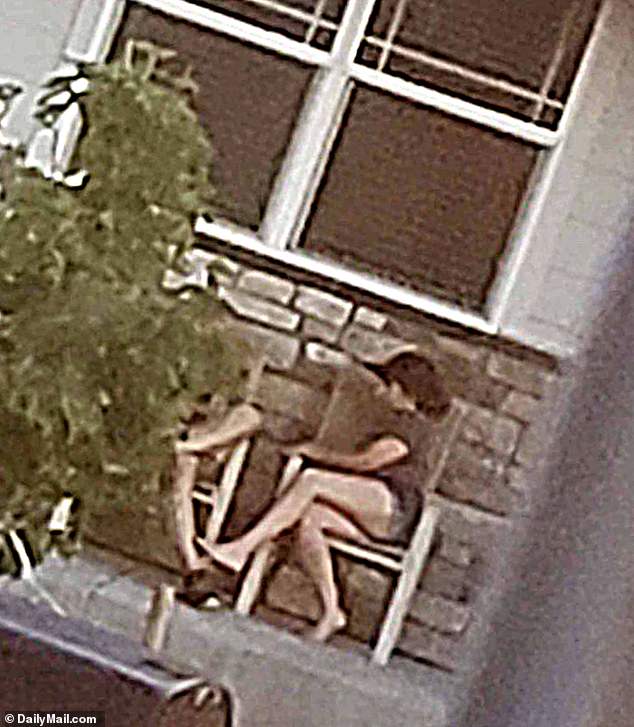 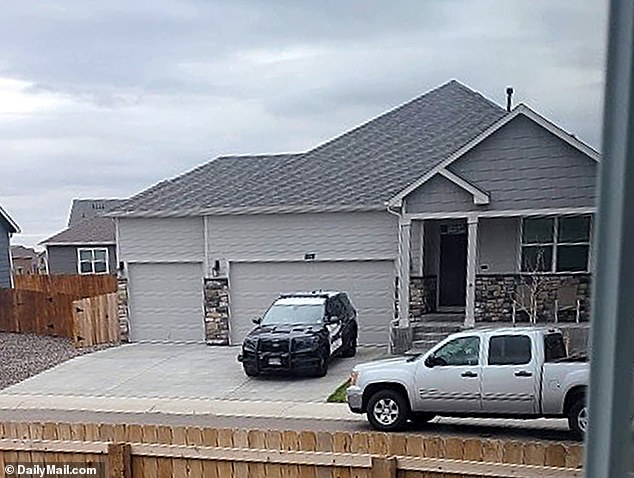 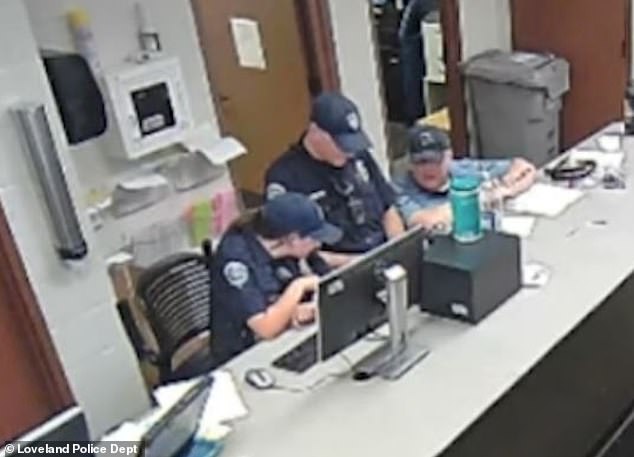 Hopp starting working at the Loveland Police Department in December 2019, prior to that he worked at a police officer in Nacogdoches, TX for a year and a half, and before that he worked as a deputy sheriff at the Monroe County FL Sheriff’s Department.

Last week the Loveland City Manager announced that four officers are now on administrative leave following the violent arrest of 73-year old Karen Garner last June for forgetting to pay for $14 worth of items at a local Walmart.

During her arrest, Hopp can be seen on video violently shoving Garner to the ground and then later bragging about it to Jalali and another officer Tyler Blackett. Garner was refused medical attention during her detention and later suffered several injuries as a result.

In neither police report by Hopp or Jalali do they mention Garner was injured.

When Loveland Sgt Phil Metzler arrived at the scene after Garner arrest last June, he can be heard on video asking Jalali if she was okay.

Jalali responded, ‘I’m a little bloody, a little muddy.’ Hopp who was standing nearby told the Sgt. ‘it’s her (Garner’s) blood.’ From the video you can see Garner’s own blood on the white sweatshirt she was wearing. 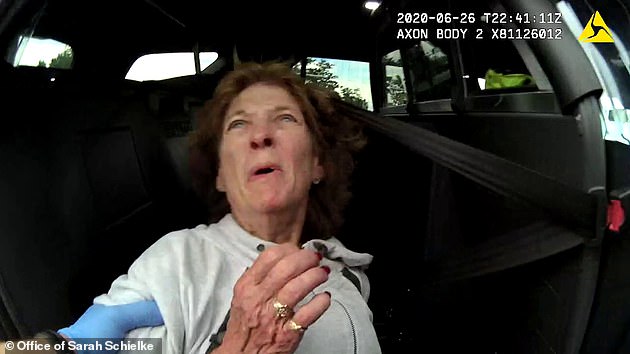 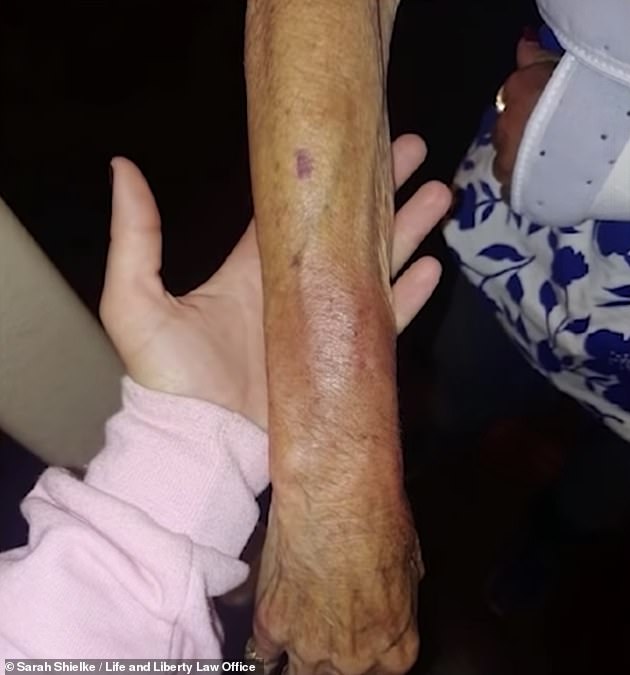 Photos taken in the aftermath of the arrest show Garner with a severely bruised and swollen arm. She also sustained a bloody nose 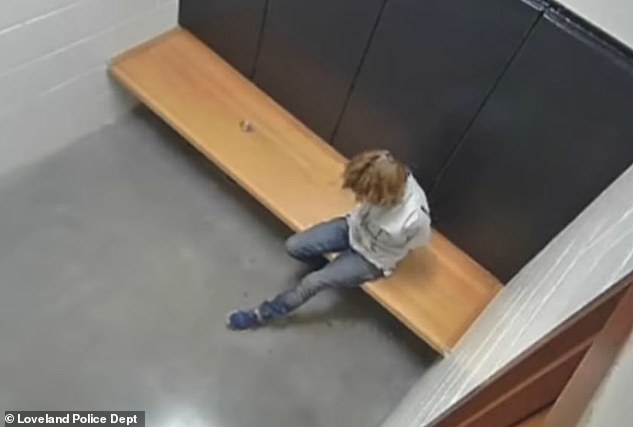 Garner is seen slumped in a holding cell as officers mocked video of her arrest. In the caption of her YouTube video on Monday, Garner’s attorney Sarah Schielke said she was ‘alone, confused and crying in pain’ for six hours without any medical attention

After Garner was placed in the back of Jalali police SUV. Jalali asked Garner several times if she needed medical attention. A clearly despondent Garner kept saying ‘I want my credit card.’ Which Jalali answered back, ‘that’s not an option right now.’

While at the jail, each officer typing their police reports in front a computer, Hopp can be heard asking Jalali, ‘Did you turn it off?’ Which Jalali looks down at her police body camera and looks back up and smiles. They then fist-bumped each other.

Jalali asks how ‘how do you think that went? To which Hopp replied, ‘I think it went well… I think we crushed it.’

Then Hopp asked Jalali ‘did you hear it pop? Jalali answered ‘Mmmhm.’

Garner suffered from multiple injuries that day according to a lawsuit filed by Attorney Sarah Schielke, including a broken humerus, a dislocated shoulder and a sprained wrist.

During the video released by Schielke you can see Hopp and Jalali consult each other while typing up their respective police reports.

A source said that Daria is upset she filed the police report she filed, and regrets writing what she wrote.

On April 28th Loveland Police Department released a statement saying that four officers in connection with the arrest of Karen Garner are now the subject of a criminal investigation.