A series of colourised photographs have been released that show what it was like to travel across Europe one hundred years ago, in a time before civil aviation made globetrotting more accessible.

With international travel currently completely halted due to ongoing coronavirus restrictions, the photos offer a rare glimpse into the quarantine, test, and fine-free travelling lives of the generations who came before us.

The photographs were taken by German-American photographer Arnold Genthe whilst on a tour of Europe during the early 1900s, where he captured the people and sights of Spain, Greece and Belgium.

In one image, a group of dancers are seen performing while wearing traditional himation tunics at an ancient stone relic site in Greece in 1929.

In another, female flamenco dancers wear sevillana dresses while a male dancer plays the tambourine as the troupe performs at a small village in Spain.

Others showed an ornate bathing machine belonging to Spain’s King Alfonso, sat atop the busy sands of San Sebastian beach, and another shows Spain’s Burgos Cathedral originally consecrated in the year 1260.

Genthe also took a photo of Brussels’ Grand Place, the central square of Belgium’s capital city, showing people sitting in the square, shielding from the sun under parasols.

His photographs also capture a variety of people who lived in Europe at the time, showing what they wore, the work they did, and how the spent their leisure time.

Arnold moved to San Francisco, USA, to further his career as a tutor in the late 1800s but returned to Europe for a visit during his later life. 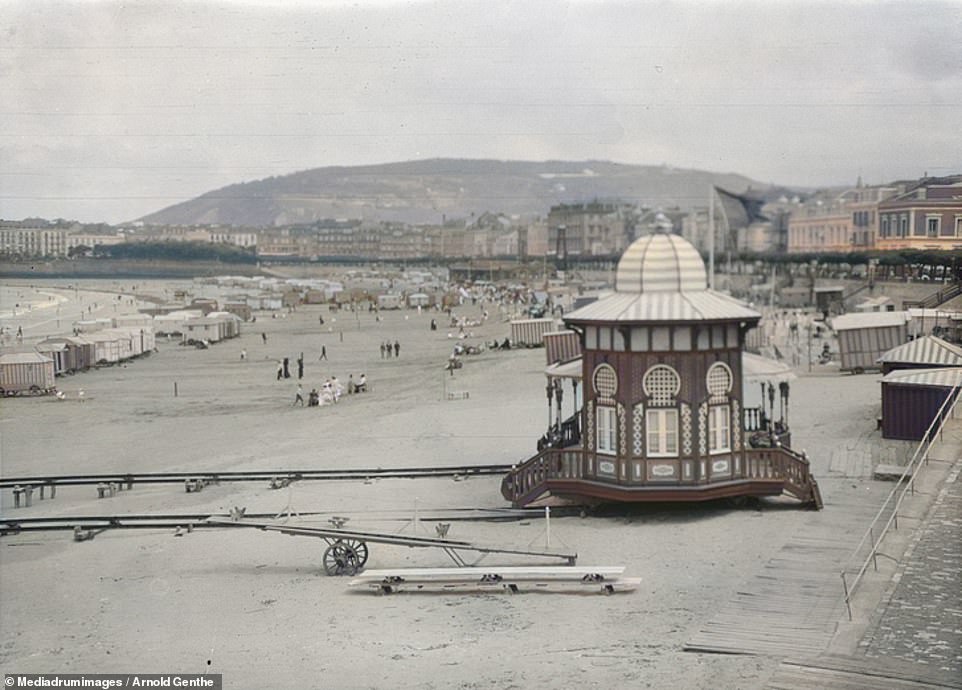 A series of colourised photographs have been released that reflect on what it was like to travel across Europe one hundred years ago. Pictured: An ornate bathing machine belonging to Spain’s King Alfonso on San Sebastian Beach. The large hut appears to be on rails running down the beach. In the distance, smaller huts can be seen lining the ocean-front. The photographs were taken by German-American photographer Arnold Genthe whilst on a tour of Europe during the early 1900s 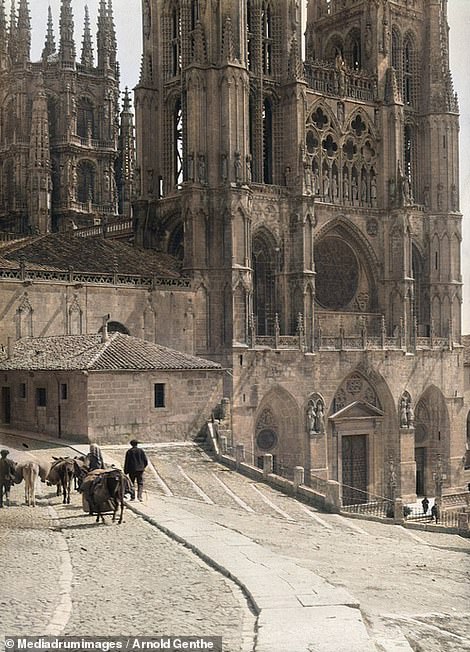 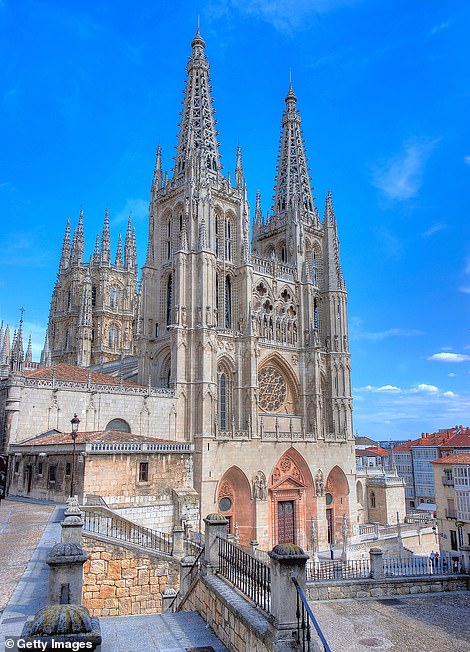 Pictured left and right: The Cathedral of Saint Mary of Burgos, a Catholic Cathedral dedicated to the Virgin Mary located in the Spanish city of Burgos in the 1900s (left) and today (right). In the picture taken in the 1900s by Genthe shows two men leading a group of pack donkeys down the slope. The picture of cathedral today shows a new staircase that has been built since Genthe’s travels, but the cathedral otherwise remains largely the same as it was 100 years ago. It was originally consecrated in the year 1260. 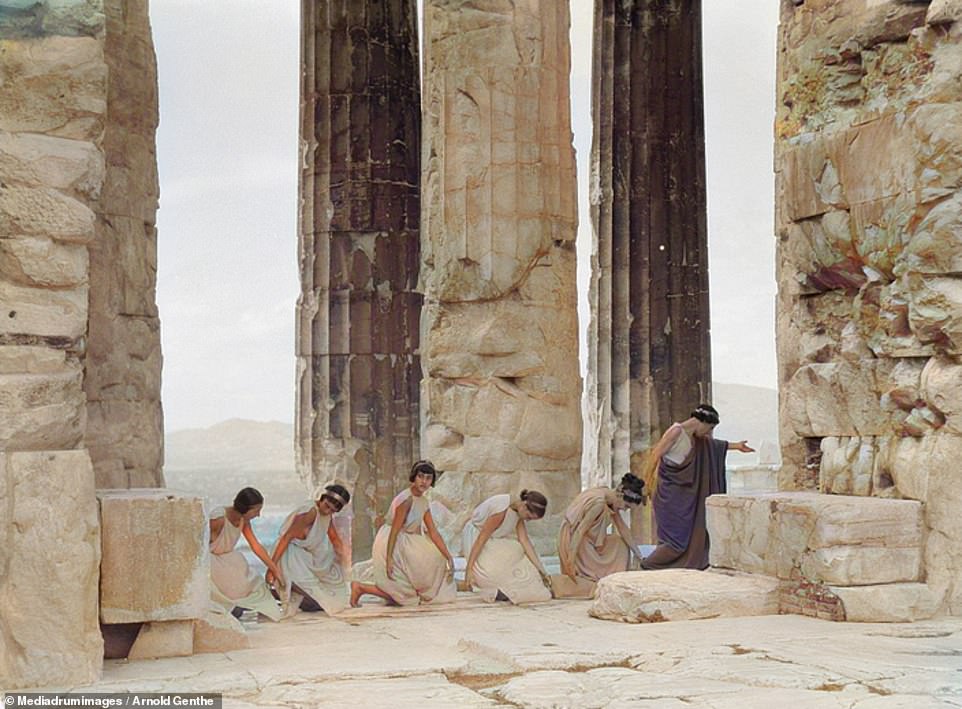 Pictured: A group of dancers perform whilst wearing traditional himation tunics at an ancient stone relic site in Greece in 1929. The dancers appear to be recreating what ancient Greek women would have likely worn in the temple 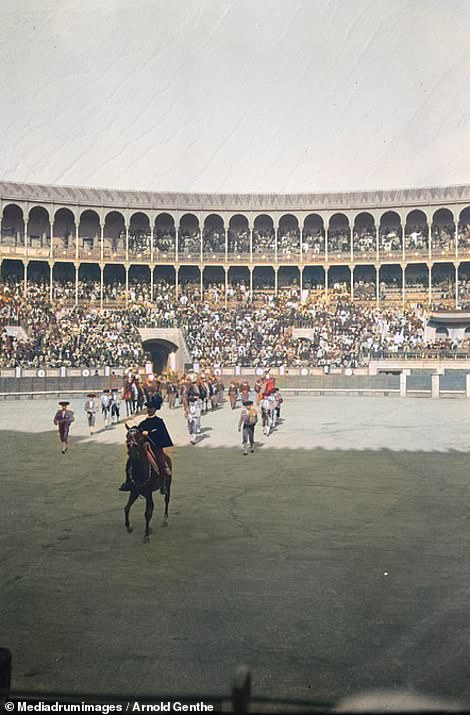 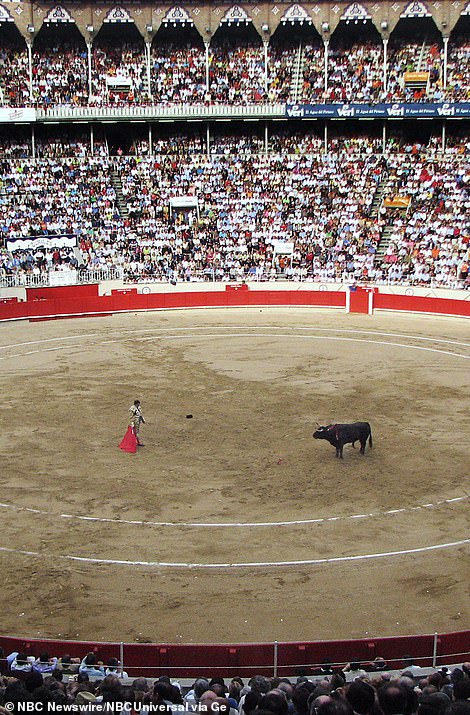 Left: A short parade precedes a bull fight in Barcelona, Spain. Right: Some 19,000 bullfight aficionados packed into the Monumental bullring to hail the triumphant comeback of Jose Tomas in 2007. Bull fighting in Spain is a tradition that can be traced as back to before the Roman Empire, where the first bullfighting rings are believed to originate from 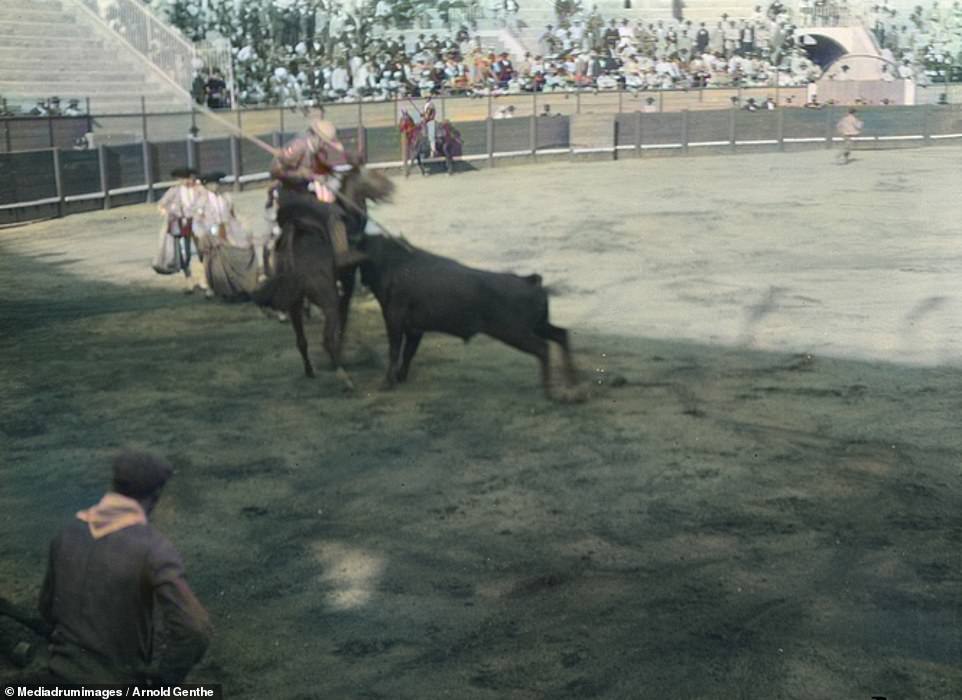 Pictured: A man on the back of a horse spears a bull in a bull fighting ring in Spain. The bull appears to have charged the horse he is riding on, which looks dangerously close to toppling over. On the other side of the horse, two more matadors can be seen, one holding fabric used to distract the bulls during the dangerous performance 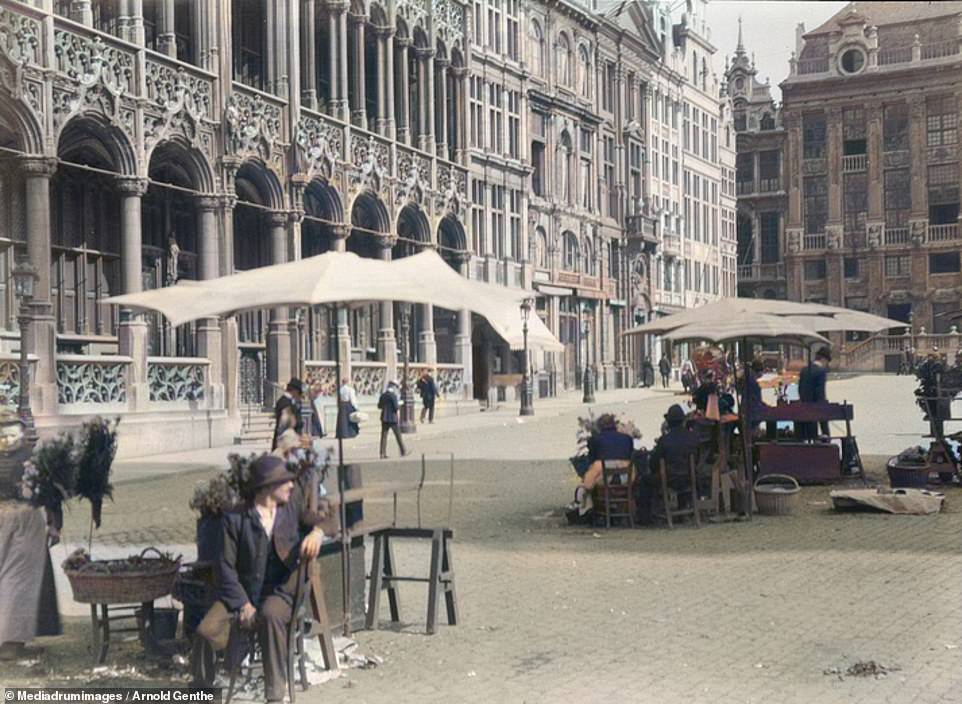 Pictured: People are seen sitting under umbrellas in Brussels’s Grand Place, the central square of Belgium’s capital city. The square is surrounded by opulent guildhalls and two larger edifices, the city’s Town Hall, and the King’s House or Breadhouse 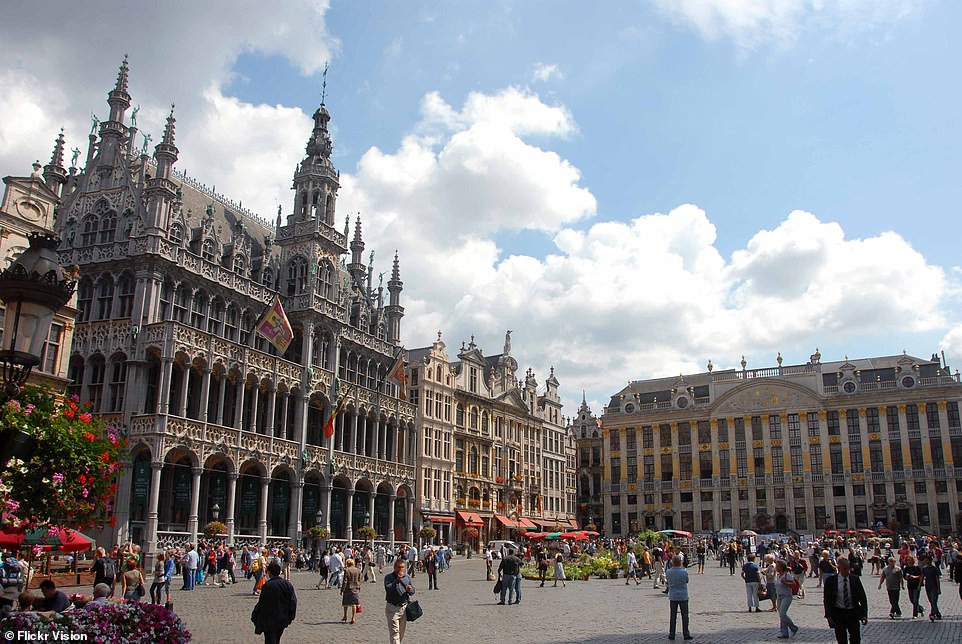 Pictured: Brussel’s Grand Place today. The large building on the left is the Brussels City Museum, situated opposite the town hall. It became known as the King’s House, although no king has ever lived there, or the Broodhuis (‘Bread hall’), after the market whose place it took. It was rebuilt after suffering extensive damage from the bombardment of Brussels in 1695 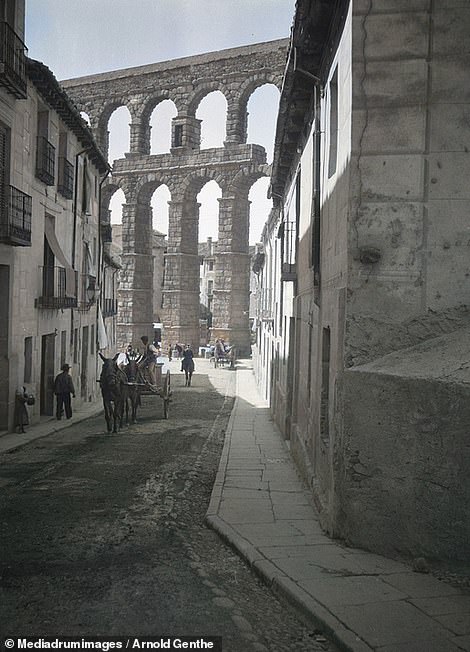 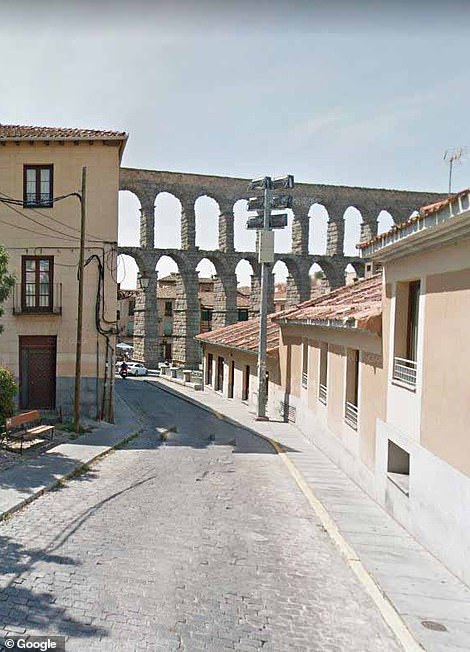 Pictured left: The Roman Aqueduct of Segovia, as seen through the nearby streets of the old town found in the south-east of the country. It is one of the best-preserved elevated Roman aqueducts and the foremost symbol of Segovia, as evidenced by its presence on the city’s coat of arms. Left: The Aqueduct, as seen on Google maps today through the streets 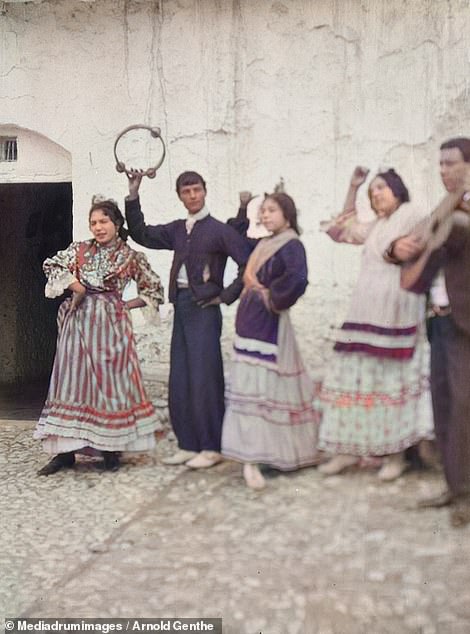 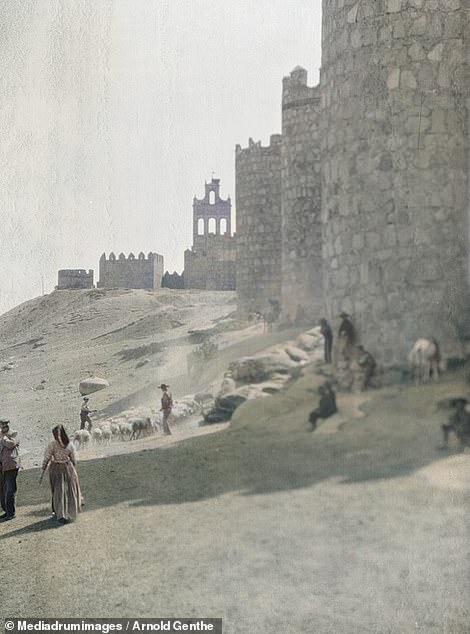 Left: Female flamenco dancers wore sevillana dresses whilst a male dancer played the tambourine as the troupe performed at a small village in Spain. Right: People and animals walk at the foot of the walls of a settlement in Europe. Genthe’s travels took him to ancient walled settlements across the continent 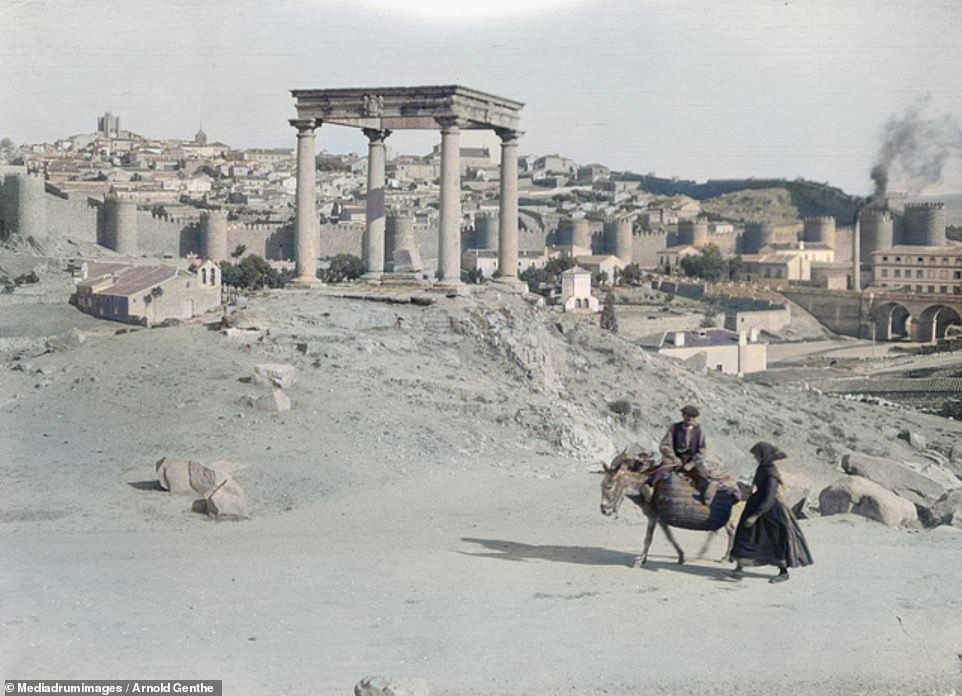 Picrured: A man riding a donkey alongside a woman dressed in a long travel cloak and good ride along a path next to the ‘Los Cuatro Postes de Ávila’, or ‘The Four Posts’ over looking over the ancient Spanish city of Ávila, found north-west of Madrid 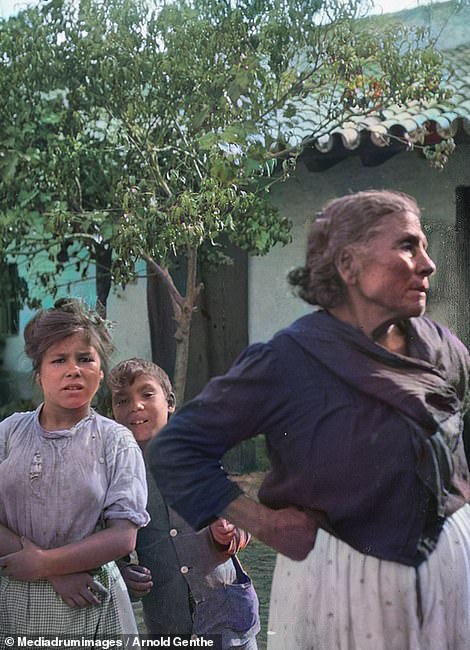 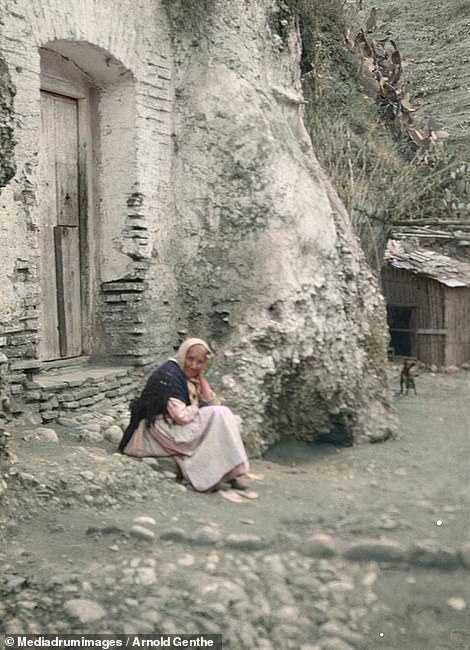 Left: Genthe encountered this curious family in a small Spanish village. Right: A woman poses for a photo on the doorstep of her house in a small settlement in Greece 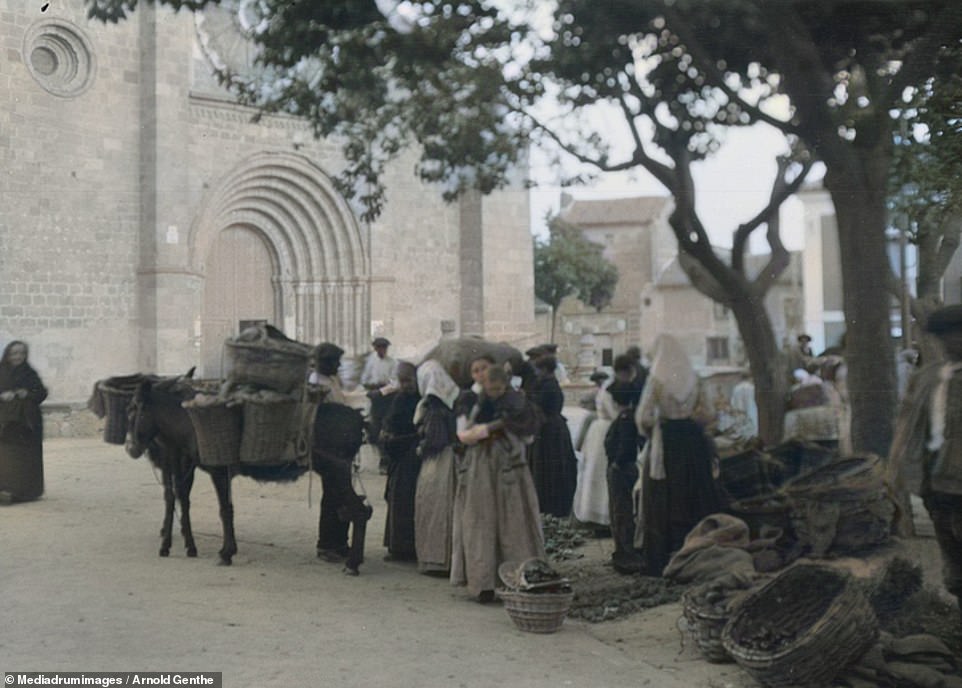 Pictured: Traders selling their wares out of baskets, some of which are being carried by donkeys, outside of this cathedral 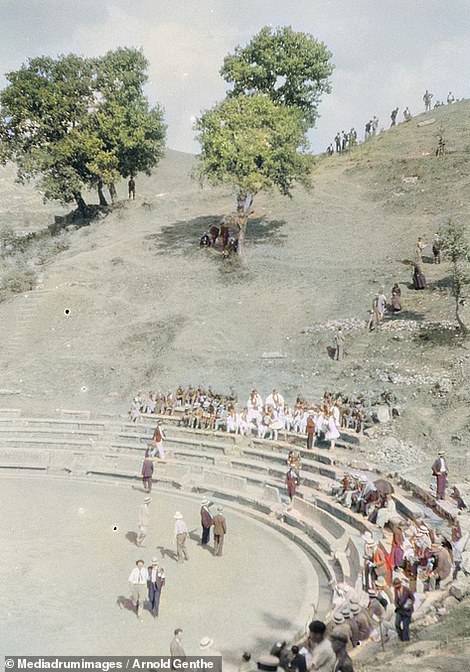 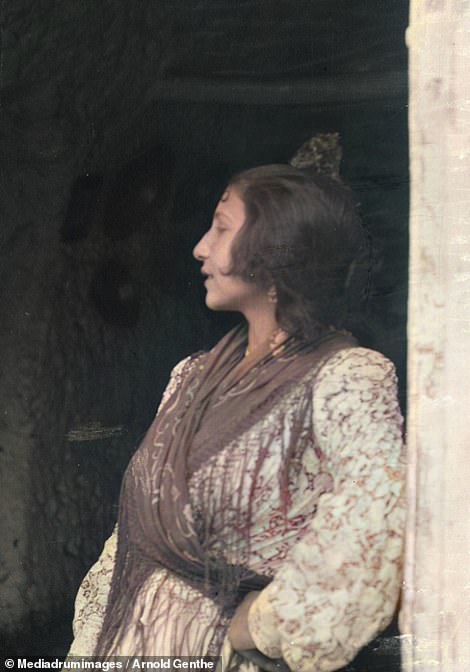 Left: Spectators gathered at an ancient Greek amphitheatre People can also be seen sitting on the hill behind the stone seats, shielding from the sun. Right: A woman poses in a doorway for a photo wearing a traditional sevillana dress in Spain