By Maxine Shen For Dailymail.com

The comic took no prisoners during his monologue, addressing everything from people not wearing masks during coronavirus, gay pride – even actor Rick Moranis being assaulted which he jokingly celebrated as a return to a grittier New York City.

The tongue-in-cheek joke about Moranis led him to muse whether he would be ‘cancelled’.

‘I’ll probably get canceled for doing that joke how stupid is that canceled thing? ‘They’re literally running out of people to cancel. They’re going after dead people now. They’re trying to cancel John Wayne.’

Wayne, who died in 1979, has been attacked in recent years over his mymisogynistic and racist views. 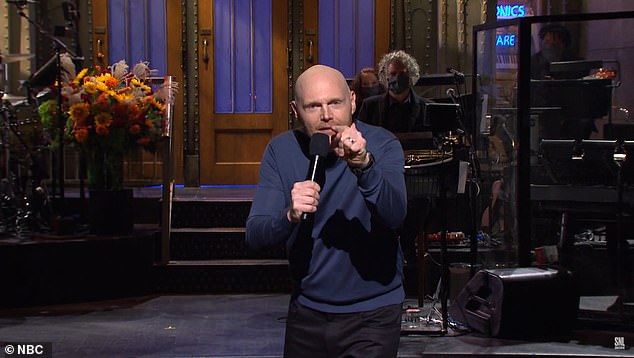 Comedian Bill Burr’s SNL monologue, which touched on cancel culture and being woke, was slammed on social media for being ‘homophobic,’ ‘misogynistic’ and ‘obnoxious’ 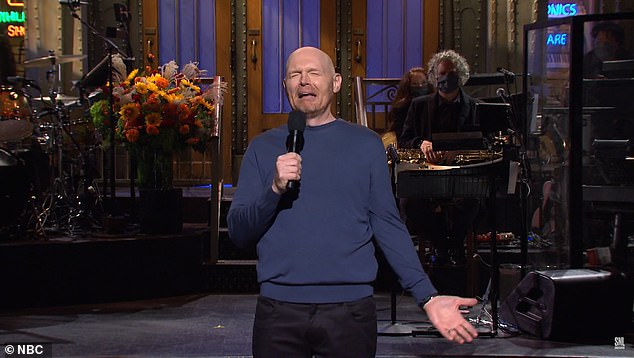 People said now was not the time for Burr’s monologue, but he did have some supporters

But it was his jokes about Gay Pride Month and that really set off social media.

Burr recounted the moment when he learned what Gay Pride Month, while in New York City filming Judd Apatow’s The King of Staten Island.

He said he asked a doorman why the city was so full of people and was told it was temporary, that they were in town for June’s Gay Pride Month, at which point it clicked in Burr’s head: ‘Tank tops! Zero percent body fat! Two guys kissing! I didn’t know that!’

‘That’s a little long, dontcha think? For a group of people who were never enslaved?’ Burr joked as the audience chuckled nervously.

‘How did they get all of June? Dude, black people were actually enslaved. They get February. They get 28 days of overcast weather, the sun goes down at four in the afternoon, everybody’s shivering, nobody wants to go on the parade.

‘How about you hook ’em up with July?’ Burr asked, pointing out that ‘these are equator people! Give them the sun for 31 days! There’s gay black people, they could celebrate from June 1 to July 31 – 61 days of celebrating!’

Following his monologue, social media lit up with criticism.

Vulture critic Jen Chaney tweeted: ‘There is no real “time” for that Bill Burr monologue, but I’ll tell you what, now is NOT IT.’

Not everyone was quick to slam Burr, though.

‘Bill Burr makes valid points about cancel culture trying to cancel EVERYTHING IN SIGHT. Then delivers jokes designed to prove that exact point. And twitter took the bait. Comedy is not for you. It’s about you,’ tweeted @ToddMichaelsen.

‘Bill Burr is doing EXACTLY what you’d think he was gonna do – make you uncomfortable and f**king KILLING THE STAGE. You love to see it,’ wrote @leetmaster93.

Burr has been a comedian since 1992 and landed acting roles in shows including Breaking Bad, and movies The Heat and Date Night. He also has a podcast – Bill Burr’s Monday Morning Podcast.

He’s known for his rage-fueled comedy that has no time for PC culture.

Husband Looks at Other Women and I Want Him to Stop

Egypt … a significant decrease in Corona deaths and injuries

Reuters Follow RT on The Chinese company "Sinovac Biotec" said that a clinical trial in Brazil...