The deal finally delivers long-overdue help to businesses and individuals and provides money to deliver vaccines to a nation eager for them.

It establishes a temporary $300 per week supplemental jobless benefits and $600 direct stimulus payments to most Americans – half of what they got in April – along with a new round of subsidies for hard-hit businesses and money for schools, health care providers and renters facing eviction.

The House was expected to vote on the legislation Monday and Senate action would follow. Congress passed and President Trump signed a one-day stopgap spending bill to avert a government shutdown at midnight Sunday. 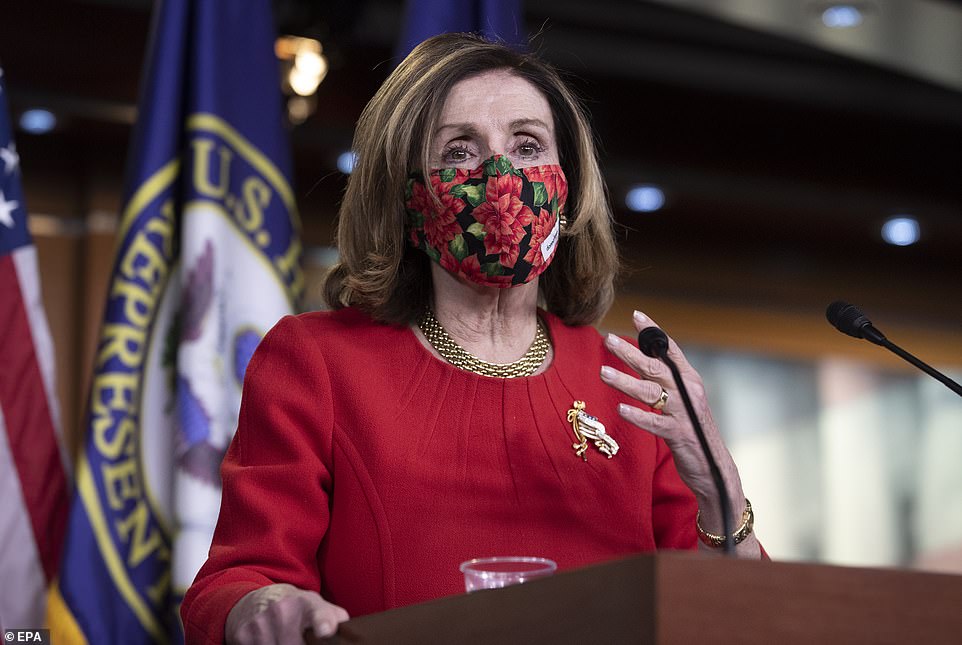 Speaker of the House Nancy Pelosi (D-CA) holds a news conference after Congressional leaders announced a deal on a  $900billion COVID relief package. The House was expected to vote on the legislation Monday and Senate action would follow. Congress also passed and President Trump signed a one-day stopgap spending bill to avert a government shutdown at midnight Sunday 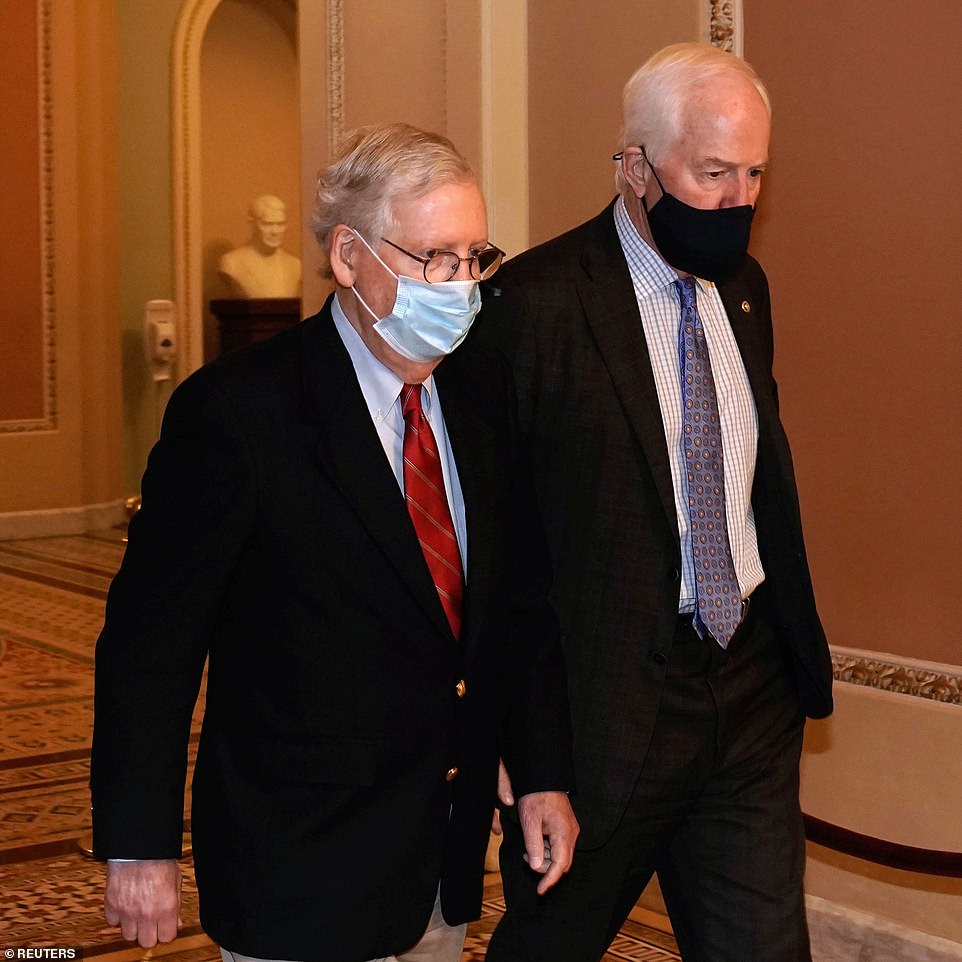 U.S. Sen. Majority Leader Mitch McConnell (R-KY) walks with U.S. Sen. John Cornyn (R-TX) from the Senate floor to his office Sunday after agreeing to the final details of the relief package

The $900billion stimulus plan Senate leaders agreed to on Sunday would provide direct aid to citizens as well as aid to businesses. A vote is expected Monday. 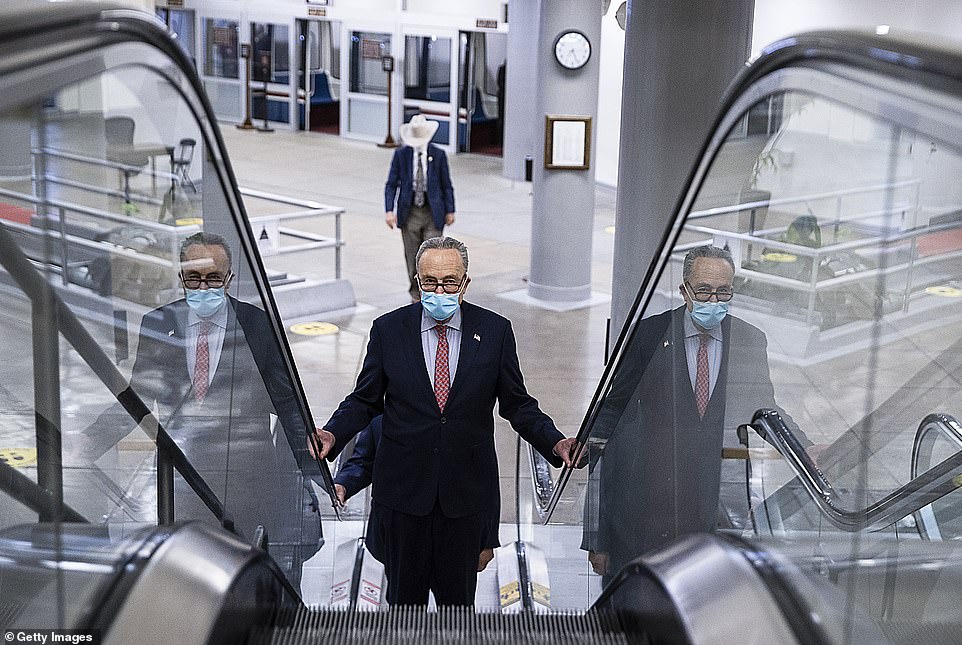 Senate Minority Leader Chuck Schumer heads back to his office after the news conference with Pelosi. Schumer reached an agreement in principle on the language of the bill with Republican leaders

When to Expect Your Relief Check

Direct checks to Americans could start hitting accounts shortly after Jan. 1, assuming Congress passes the bill Monday and Trump signs it before Christmas.

Additionally, the relief could come quicker than it did in the first round earlier this year, as millions have verified their information on the IRS’s ‘Get My Payment’ site.

Those receiving paper checks would get their money in the coming weeks.

Republican and Democratic leaders said the package should have enough support to pass both chambers of Congress.

The legislation was held up by months of dysfunction, posturing and bad faith. But talks turned serious last week as lawmakers on both sides finally faced the deadline of acting before leaving Washington for Christmas.

Senate Majority Leader Mitch McConnell said Sunday: ‘At long last, we have the bipartisan breakthrough the country has needed.’

‘There will be another major rescue package for the American people. It is packed with targeted policies to help struggling Americans who have already waited too long,’ he added.

In a joint statement with Speaker of the House Nancy Pelosi, Schumer said: ‘We are going to crush the virus and put money in the pockets of the American people.’

President-elect Joe Biden said he applauds ‘the bipartisan Congressional economic relief package that will deliver critical resources to fight COVID-19 … But this action in the lame duck session is just the beginning. Our work is far from over.’

The CARES Act was credited with keeping the economy from falling off a cliff amid widespread lockdowns this spring, but Republicans controlling the Senate cited debt concerns in pushing against Democratic demands. Republican politicians, starting with President Donald Trump, focused more on reopening the economy and less on taxpayer-financed steps like supplemental jobless benefits.

Progress came after a bipartisan group of pragmatists and moderates devised a $908 billion plan that built a middle ground position that the top four leaders of Congress – the GOP and Democratic leaders of both the House and Senate – used as the basis for their talks. The lawmakers urged leaders on both sides to back off of hard-line positions.

‘We put our heads down and worked around the clock for nearly a month to produce a bipartisan, bicameral bill to address the emergency needs of our country,’ the bipartisan group of about a dozen lawmakers said in a statement. ‘Our consensus bill was the foundation of this final package.’

Pelosi blamed Congressional Republicans for the delay in passing a relief bill in comments late Sunday.

‘What took so long is because we could not get our Republican colleagues to crush the virus… they didn’t believe in the science, we knew that. But they did believe in herd immunity and that’s why we never could come to that first bill pillar: crush the virus.

Donald Trump signed a two-day funding extension so lawmakers could stay on Capitol Hill through the weekend and get a deal passed on the aid. On Sunday, he signed another extension to carry government operations through Monday.

The final agreement is the largest spending measure yet. It combines COVID-19 relief with a $1.4 trillion government-wide funding plan and lots of other unrelated measures on taxes, health, infrastructure and education.

Late-breaking decisions would limit the $300 per week bonus jobless benefits — one half the supplemental federal unemployment benefit provided under the CARES Act in March — to 10 weeks instead of 16 weeks as before.

The direct $600 stimulus payment to most people is also half the March payment, subject to the same income limits in which an individual’s payment begins to phase out after $75,000.

Direct checks to Americans could start hitting accounts shortly after Jan. 1, assuming Congress passes the bill Monday and Trump signs it before Christmas.

Additionally, the relief could come quicker than it did in the first round earlier this year, as millions have verified their information on the IRS’s ‘Get My Payment’ site.

‘I can get out 50 million payments really quickly, a lot of it into people’s direct accounts,’ Treasury Secretary Steve Mnuchin said.

Those receiving paper checks would get their money in the coming weeks. 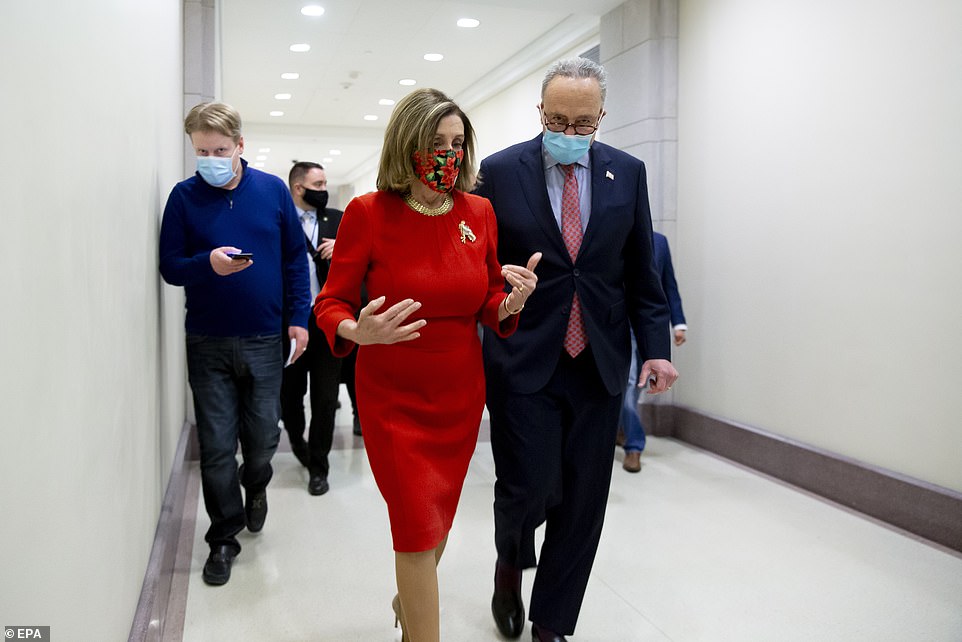 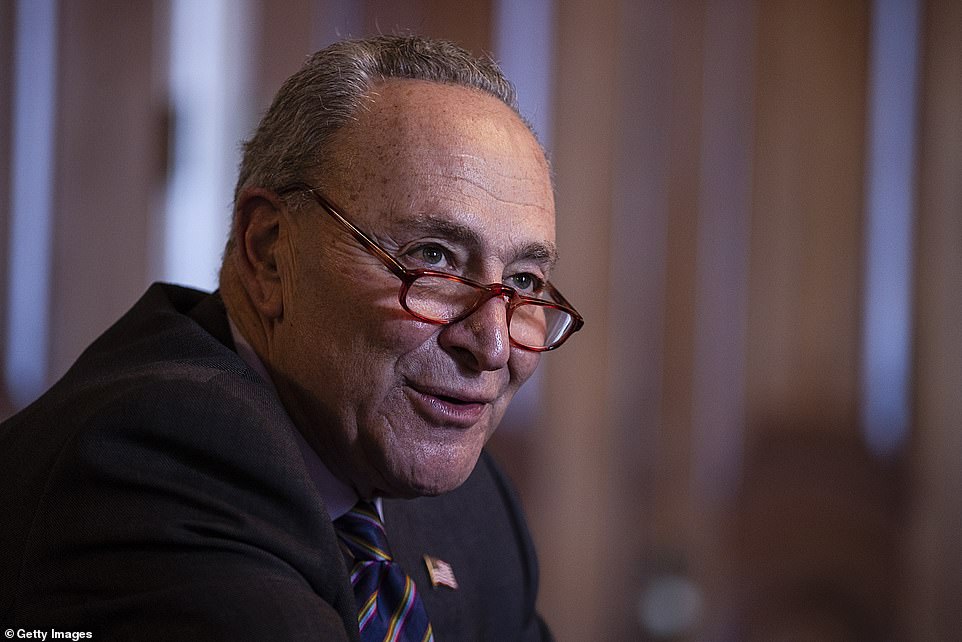 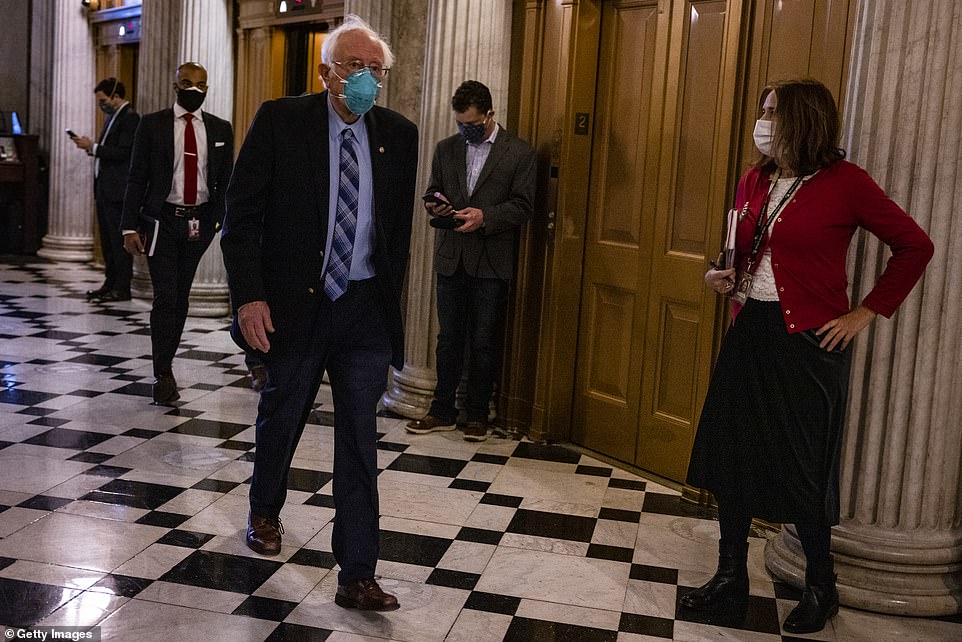 Senator Bernie Sanders, an Independent who caucuses with Democrats, is seen heading to the Senate floor on Sunday

$15billion in Aid to Airlines

The relief deal will grant U.S. airlines $15 billion in new payroll assistance that will allow them to return more than 32,000 furloughed workers to their payrolls through March 31, sources briefed on the matter told Reuters.

The legislative plan to provide about $900 billion in COVID-19 relief and fund the government is also expected to include $1 billion to passenger railroad Amtrak, $14 billion for public transit systems and $10 billion for state highways, the sources said.

Airline workers would be paid retroactive to Dec. 1 and airlines would have to resume flying some routes they stopped after the aid package expired, congressional aides briefed on the talks said earlier. Airline workers could not be furloughed through March 31 as a condition of the assistance.

A breakthrough came late Saturday in a fight over Federal Reserve emergency powers that was resolved by Schumer and conservative Republican Pat Toomey of Pennsylvania. That led to a final round of negotiations.

Toomey had been pressing a provision to close down Federal Reserve lending facilities that Democrats and the White House said was too broadly worded and would have tied the hands of the incoming Biden administration.

The Fed’s emergency programs provided loans to small and mid-size businesses and bought state and local government bonds. Those bond purchases made it easier for those governments to borrow, at a time when their finances were under pressure from job losses and health costs stemming from the pandemic.

Treasury Secretary Steven Mnuchin said last month that those programs, along with two that purchased corporate bonds, would close at the end of the year, prompting an initial objection by the Fed. Under the Dodd-Frank financial overhaul law passed after the Great Recession, the Fed can only set up emergency programs with the support of the treasury secretary.

Toomey said the emergency powers were designed to stabilize capital markets at the height of the pandemic this spring and were expiring at the end of the month anyway. Democrats said that Toomey was trying to limit the Fed’s ability to boost the economy, just as President-elect Joe Biden prepared to take office.

The agreement on virus aid would deliver more than $300 billion in aid to businesses as well as the extra $300-per-week for the jobless and renewal of state benefits that would otherwise expire right after Christmas.

The governmentwide appropriations bill would fund agencies through next September. That measure was likely to provide a last $1.4 billion installment for Trump’s U.S.-Mexico border wall as a condition of winning his signature.

The bill leaves out two of the most contentious elements in the negotiations: legal protections for businesses from coronavirus lawsuits, which had been sought by Republicans, and the substantial aid for state and local governments advocated by Democrats.

But the package helps state and local governments indirectly by providing billions for schools, coronavirus testing and other expenses, Schumer said.

The bill would allow Federal Reserve emergency lending programs to expire on Dec. 31 for businesses and state and local governments, which Republicans said were an unnecessary government interference in private business. But it does not prevent similar programs from being created. 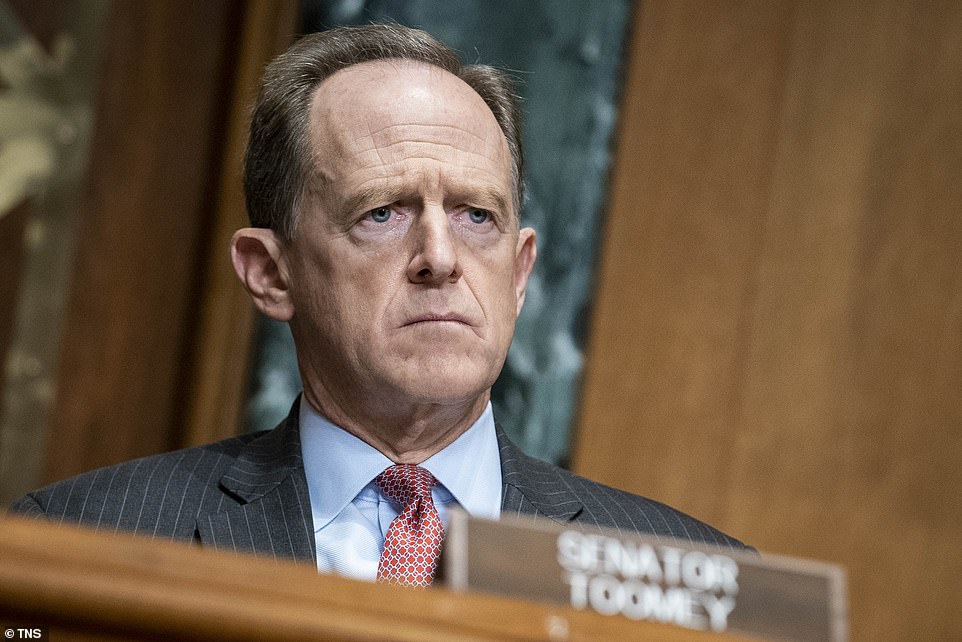 Senator Pat Toomey (pictured), a Republican from Pennsylvania, proposed a provision that would curb emergency Federal Reserve powers. This was one of the major sticking point for both sides. Schumer spent all Saturday meeting with Toomey

The $900 billion bill comes as the pandemic is delivering its most fearsome surge yet, killing more than 3,000 victims per day and straining the health care system.

As of Sunday morning the U.S. has more than 17.6 million confirmed cases of coronavirus and more than 316,000 deaths – meaning the death rate sit at around 0.017 per cent in the U.S.

While vaccines are on the way, most people won’t get them for months as priority has been set on getting the shot to healthcare workers and those in long-term care facilities.

Some lawmakers, including Republican Senator Josh Hawley and Independent Senator Bernie Sanders, were pushing for the second round of payments fo be as much as the first passed as part of the March CARES Act.

The legislation is the first significant legislative response to the pandemic since the landmark CARES Act passed virtually unanimously in March. That package delivered $1.8 trillion in aid and a more generous $600 per week bonus jobless benefits and $1,200 direct payments.

The governmentwide appropriations bill would fund agencies through next September. That measure was likely to provide a last $1.4 billion installment for Trump´s U.S.-Mexico border wall as a condition of winning his signature.

The bill was an engine to carry much of Capitol Hill´s unfinished business, including an almost 400-page water resources bill that targets $10 billion for 46 Army Corps of Engineers flood control, environmental and coastal protection projects. Another addition would extend a batch of soon-to-expire tax breaks, including one for craft brewers, wineries and distillers.

It also would carry numerous clean energy provisions, $7 billion to increase access to broadband, $4 billion to help other nations vaccinate their people, $14 billion for cash-starved transit systems, Amtrak and airports.

The 7-Day Digital Diet: How to Use Your Phone Less and Live More