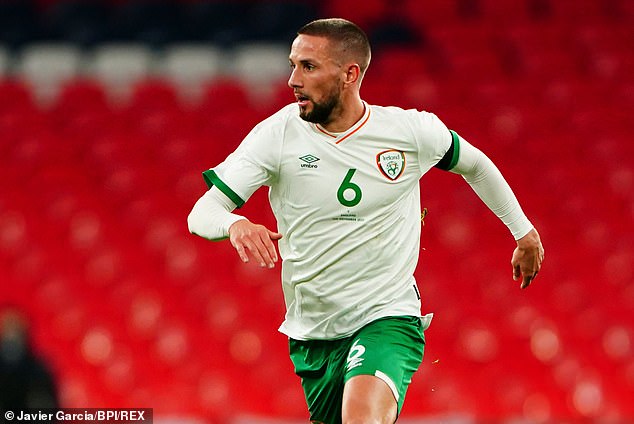 Republic of Ireland players fear for the health of family members amid the Covid-19 chaos of the national team.

Conor Hourihane admits they are waking up wondering if they will be next to test positive after four cases in the past week. The Aston Villa midfielder has already lost a family member to the disease and has concerns for his pregnant wife.

Goalkeeping coach Alan Kelly, who suffers from asthma, then revealed that he did not want to travel with the squad to Dublin ahead of Wednesday’s Nations League game against Bulgaria.

This comes on the back of the fiasco of last month’s international break when Ireland lost strikers Aaron Connolly and Adam Idah for their Euro 2020 playoff defeat in Slovakia. They sat in the wrong seats on the team flight and were too close to a staff member who then tested positive – although that was later found to be a false test result.

Two Ireland players did then test positive and four others were forced to withdraw having been close contacts.

The Aston Villa star, has also lost a family member to the disease this year

Eleven of the Republic of Ireland squad line up for a recent friendly against England, but the Irish set-up has seen four positive test results inside the last week

It is little wonder the likes of Hourihane are concerned.

‘I’ve had a family issue with Covid, somebody unfortunately passing away,’ he said. ‘It’s not an easy time. People won’t know what’s going on in people’s lives. We’re all wanting results and to win games, but sometimes there’s bigger things out there in life. This pandemic is definitely bigger than a couple of goals and a couple of results.

‘My partner is pregnant, so I don’t want to be taking anything back to her. Once everyone is safe around me, that’s all that matters. Lads are normal human beings outside football. It (Covid-19) has impacted myself and I know it has impacted others.’

Hourihane suspected this month’s internationals would be scrapped, but admitted: ‘I would never have pulled out. I suppose that’s a selfish piece of mind I have as an athlete. Hopefully I won’t bring anything home and we do get tested regularly, which makes you feel safe.

Meanwhile, Kenny has confirmed that Kelly’s withdrawal from his backroom team was connected to the positive cases of Doherty and McClean.

He was also challenged on the FAI statements which said infected players had not been ‘close contacts’ of any team-mates.

‘You can’t say that with any degree of certainty,’ he conceded. ‘We’re all still learning about the virus and we have to let the medical doctors decide that.

‘It is very difficult to contain if a player comes in with it, and it can happen. But first and foremost, I’m sympathetic towards the players themselves because it’s quite traumatic to get coronavirus, and the effect it has on their families.’

PAUL THOMAS on… The Crown controversies

PAUL THOMAS on... The Crown controversies