The hotheaded convicted killer who rammed an oar-wielding school principal with his dinghy in a viral video has cooled down – and says the bizarre incident was his fault.

John Frederick Dixon, a life parolee, was filmed in a screaming match on Tairua harbour with Catherine Browning, now regrets his behaviour – which drew so much attention there was talk of him returning to prison 33 years after being released. 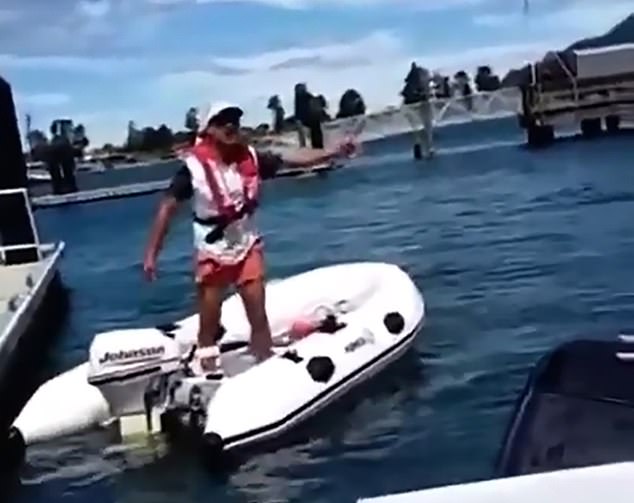 The hotheaded boatie who rammed an oar-wielding school principal with his dinghy in a viral video is John Frederick Dixon (pictured), a convicted killer on life parole with ‘severe anger issues’

Dixon explained to Stuff that boats had been speeding past the yacht he lives on with his partner, Christine, at Tairua Harbour. Two went past so fast they knocked his boat onto the dinghy and woke her up.

Dixon angrily jumped into the dinghy and chased one of them.

‘I thought I’d give them some of their own medicine and see how they like it, so I did a few donuts,’ he said.

‘At the end of the day, it was my fault. I shouldn’t have done it, I was concerned about my life.’

Dixon was released from prison in 1987 after serving eight years in prison for murder.

His unhinged recent behaviour so concerned New Zealand authorities that they requested he was recalled to prison because he posed undue risk to public safety.

Mr Dixon, now 58, was 16 when he bashed Joseph Hishon to death after the man denied him a loan in Hamilton in 1978.

Mr Hishon died from ‘extensive head injuries’ and had a broken skull.

Mr Dixon admitted punching and kicking the man’s head after he refused to hand over money for cigarettes and rent.

At the trial it was reported Mr Dixon had severe anger issues and a personality disorder the NZ Herald reported.

The video showed an enraged Dixon recklessly ramming his inflatable dinghy into an aluminium boat after a dispute with another boatie, deputy school principal Catherine Browning.

The bizarre boat rage incident erupted on January 23 at the Tairua Harbour marina, a tourist destination on the Coromandel Peninsula famous for kayaking and sailing. 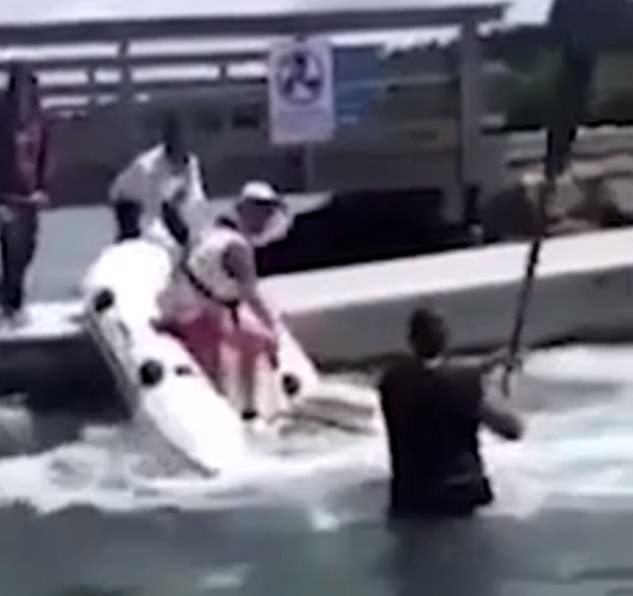 ‘You rammed our boat and you spit at me, you piece of s**t,’ Ms Browning said as Dixon approached her boat aggressively.

‘What are you talking about?’ Browning asked.

‘You drive past my boat, you rock it if you’re not doing 5 knots,’ Dixon screamed.

Ms Browning grabbed a wooden oar as Dixon angrily buzzed another mariner and swung it at him.

‘There are children,’ Ms Browning shouted. ‘What do you think you’re doing?’

Ms Browning spoke to the NZ Herald, breaking down in tears from the pressure after the video went global, escalating the incident to international news.

She said the video only captured half of the incident with the angry man originally targeting another boat in the drama that unfolded before the video started.

‘He came in at full speed attacking us, ramming us,’ she said. 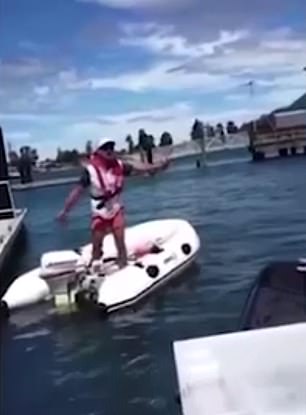 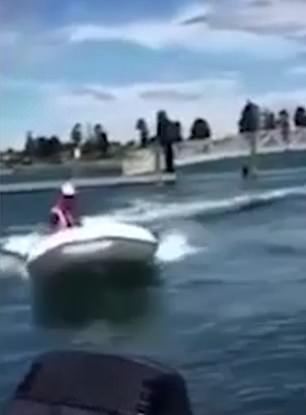 She was reportedly facing action from the school board over her behaviour too.

But Stuff also reported no charges had been laid by police though the incident was till under investigation.

Ms Browning said that the impact of the sudden and unwelcome fame has left her unable to sleep or eat.

‘It’s made my life a nightmare.’