One of the Kentucky cops in the raid that led to the fatal shooting of Breonna Taylor has been accused of sexual assault by two separate women.

Officer Brett Hankison is said to have offered his alleged victims a ride home in his police car before molesting them.

Two women – law graduate Margo Borders and medic Emily Terry – each shared their story on social media this week. They spoke out amid protests citing the death of Taylor in Louisville in the fight against police brutality.

Police spokesman Dwight Mitchell told People Louisville Metro Police has reached out the women to ‘initiate and conduct an investigation’.

Taylor, a 26-year-old black emergency medical tech, was shot eight times on March 13 after narcotics detectives knocked down the front door of the home she shared with boyfriend Kenneth Walker.

No drugs were found in the home. A lawsuit filed last week by Taylor´s family said the officers ‘spray(ed) gunfire into the residence with a total disregard for the value of human life.’ 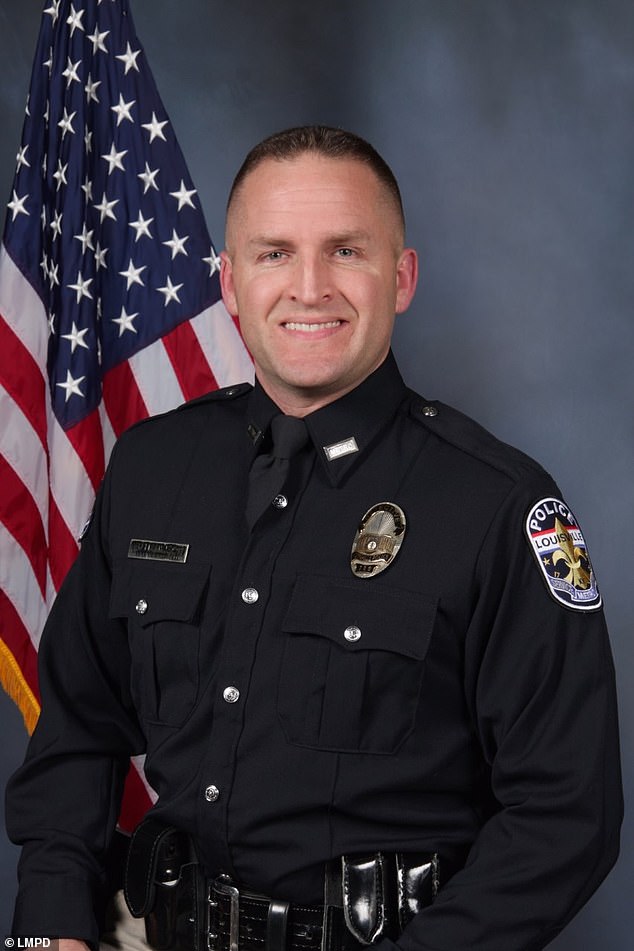 Officer Brett Hankison, pictured, has been accused of having a ‘vendetta’ against Kendrick Wilson and of being ‘a dirty cop’ in an October lawsuit; he denied all the claims 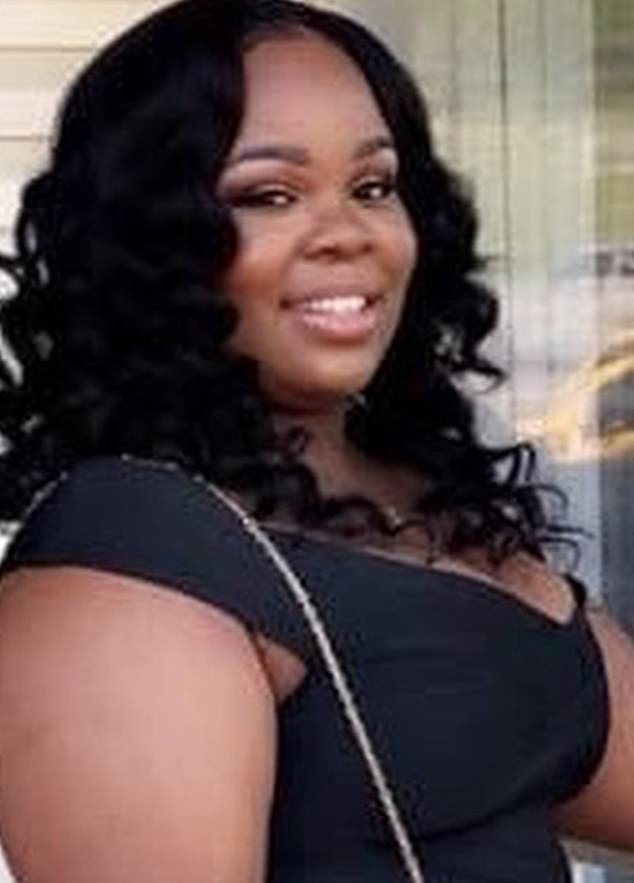 The search warrant used to justify the police raid which left Breonna Taylor, pictured, 26, dead on March 13 claimed that Taylor’s home was used by a suspected drug dealer, Jamarcus Glover to receive suspicious packages. The family says this claim is false and is suing police

Accusing Hankison Borders, who studied law at the University of Louisville, said: ‘In April of 2018 I went out to a bar with some friends. I went to call an uber home and a police officer who I had interacted with on many occasions at bars in St. Matthews offered me a ride home.

‘He drove me home in uniform, in his marked car, invited himself into my apartment and sexually assaulted me while I was unconscious.

‘I never reported him out of fear of retaliation. I had no proof of what happened and he had the upper hand because he was a police officer. Who do you call when the person who assaulted you is a police officer? Who were they going to believe?’

In a second online accusation Terry, who appears to have recently graduated as a physician assistant from Sullivan University, wrote: ‘This is Brett Hankison. In early fall, I began walking home from a bar intoxicated.

A police officer pulled up next to me and offered me a ride home. I thought to myself, “Wow. That is so nice of him.” And willingly got in.

‘He began making sexual advances towards me; rubbing my thigh, kissing my forehead, and calling me “baby”. Mortified, I did not move. I continued to talk about my grad school experiences and ignored him.

‘As soon as he pulled up to my apartment building, I got out of the car and ran to the back. My friend reported this the next day, and of course nothing came from it.’ 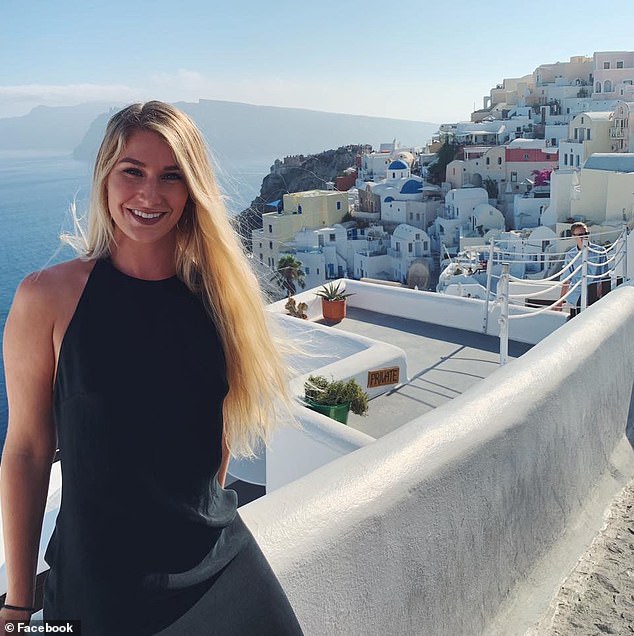 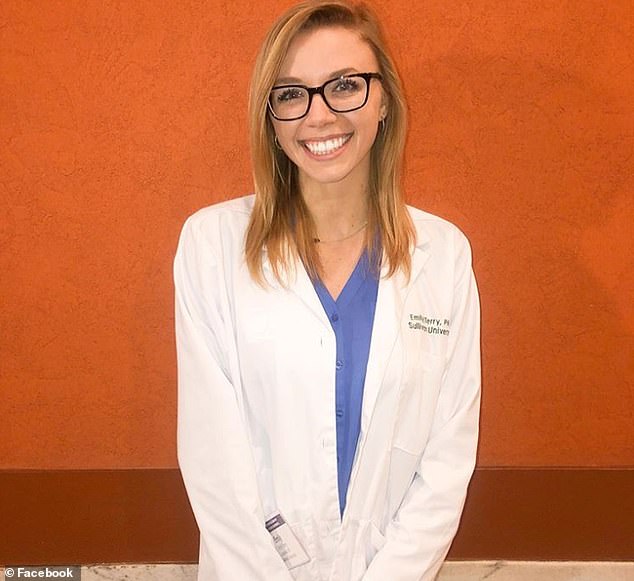 Emily Terry, pictured, spoke out amid protests citing the death of Taylor in Louisville in the fight against police brutality

Breonna’s boyfriend Kenneth can be heard on the call crying and calling Taylor’s name in the 911 call made shortly after her death.

‘Somebody kicked in the door and shot my girlfriend,’ Walker tells a dispatcher. He says Taylor is on the ground and that she was shot in the stomach.

Officer Hankison has already been accused of having a ‘vendetta’ against another man, Kendrick Wilson and of being ‘a dirty cop’ in an October lawsuit; he denied all the claims.

Wilson’s ongoing federal lawsuit – unrelated to the shooting incident in March – accuses Hankison of targeting him and planting drugs, The Courier Journal reported.

It says Hankison arrested Wilson three times over a two year period at bars where he worked as off duty security. The charges against Wilson stemming from these incidents were dropped on two of these occasions. One case is still pending.

The suit says Hankison and Wilson were also involved in ‘a relationship with the same woman’. It says the officer was ‘unfairly targeting’ Wilson.

Taylor’s family says that Louisville cops obtained the warrant used to raid her home based on false information that investigators gave to the judge. 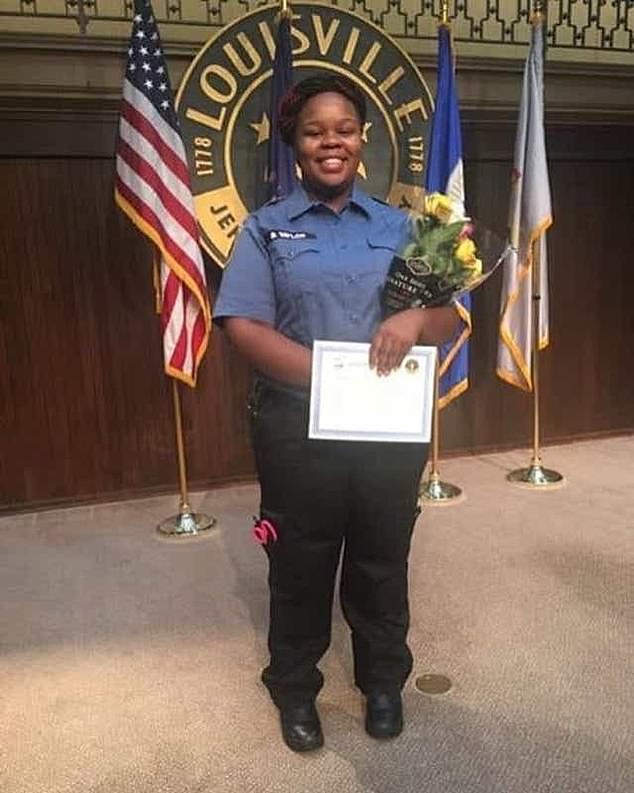 Breonna Taylor, 26, died in the early hours of March 13 after law enforcement raided the home she shared with her boyfriend Kenneth Walker in Louisville, Kentucky 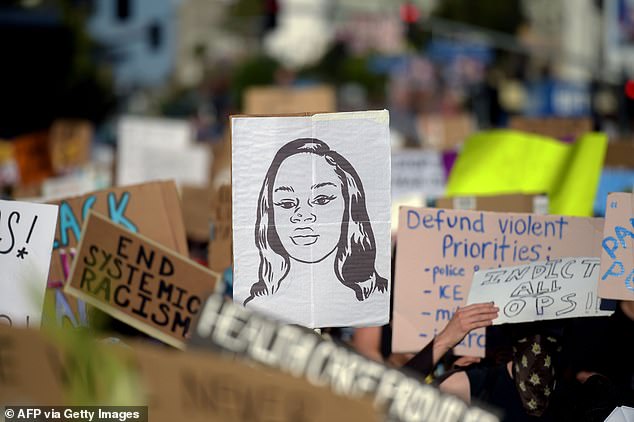 Protesters march holding placards and a portrait of Breonna Taylor during a demonstration against racism and police brutality, in Hollywood, California on June 7 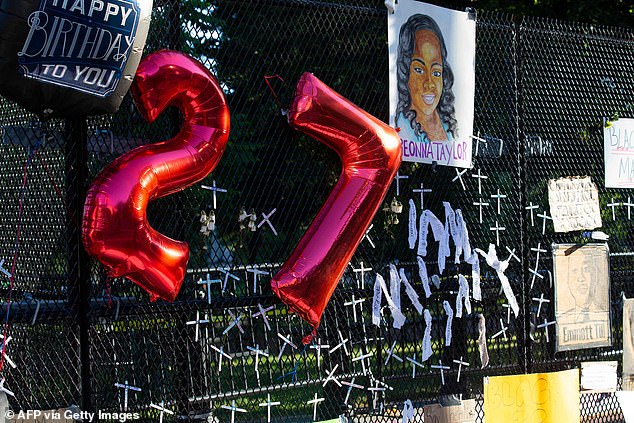 Balloons and a drawing for Breonna Taylor who would have turned 27, but was killed by police officers, hangs at the fence of Lafayette Square near the White House, to protest police brutality and racism, on June 7

Attorneys for the family of 26-year-old Breonna filed a lawsuit against Louisville Metro Police Department alleging that a detective falsely claimed that a drug suspect was receiving postal packages at her house.

In the early morning hours of March 13, Louisville police executed a ‘no-knock’ raid on her home as part of an investigation centered on two men suspected of selling drugs in the Russell section of the city.

Taylor’s apartment in southwest Jefferson County was more than 10 miles away from the Russell neighborhood, according to the Louisville Courier Journal.

Police suspected Taylor’s home was used to receive drugs, and a judge signed off on a ‘no-knock’ warrant allowing law enforcement officials to raid her home.

Just before 1am, Louisville police said they identified themselves before using a battering ram to enter Taylor’s home, where she and her boyfriend, Kenneth Walker, were in bed.

Taylor’s neighbors and her family dispute this. They said police never identified themselves, and that Walker, who was legally allowed to carry a firearm, shot at the cops thinking that he was being robbed. 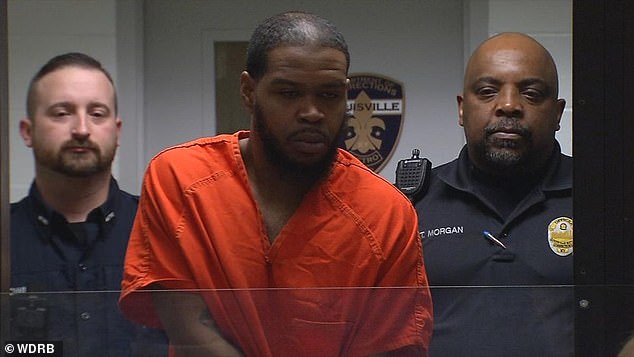 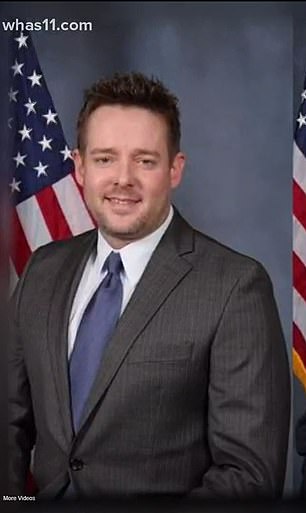 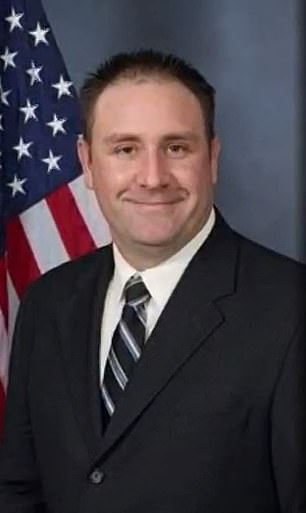 The suit claims that LMPD Sgt. Jonathan Mattingly, left, and officers Brett Hankison and Myles Cosgrove, right, entered their apartment without announcing themselves

Walker had been arrested and charged with first-degree assault and attempted murder of a police officer after Sgt. Jonathan Mattingly was shot in the leg during the raid.

All three officers are named as defendants in the lawsuit filed by Taylor’s family.

Taylor had no criminal record and worked for two local hospitals. The lawsuit alleges that police fired at least 20 rounds into the home.

The warrant which was approved by a judge the day before Taylor died was based on a detective’s belief that one of the drug suspects in Russell, Jamarcus Glover, used Taylor’s residence to receive mail, keep drugs, or stash money from the sale of drugs.

Glover was arrested in a separate raid that same night more than 10 miles away from Taylor’s home.

Coronavirus lockdown: All shops can open on Monday, minister confirms

Little Britain pulled from iPlayer and Netflix because ‘times have changed’

Little Britain pulled from iPlayer and Netflix because 'times have changed'

After covid: ‘Working from home’ is long term ambition