Matt Hancock today confirmed the UK will have a booster vaccination programme later this year as he announced 10million people have now had second doses.

The Health Secretary hailed the ‘terrific milestone’ today after another 221,193 people got their booster jabs on Sunday, taking the total to 10,152,039.

It means almost one in five adults in Britain have the best available protection against Covid, with almost all of the country’s most vulnerable people now covered.

A total of 32.9million people have had their first dose of a vaccine, meaning well over half of the adult population have at least some protection.

Mr Hancock said uptake of the jab so far has been ‘astonishingly high’ and that the country remains on track to offer a first jab to all adults by the end of July. It also remains on track, he said, to come out of lockdown in June.

He said new variants of the virus were the biggest threat to Britain’s newfound security. The booster rollout, expected to come in the autumn, will offer people a third jab that tackles strains like the South African one which may weaken the original vaccines.

Everyone over the age of 50 has been offered a vaccine already, with the NHS now targeting those in their late 40s for the limited supply of first doses available this month.

Supply problems and a huge surge in demand for boosters means that the number of first-timers coming forward is a fraction of what it was in March, but the rollout is still reaching almost half a million people every day, most of them for second doses. 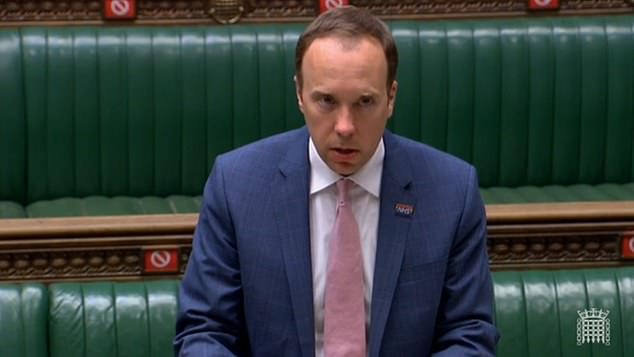 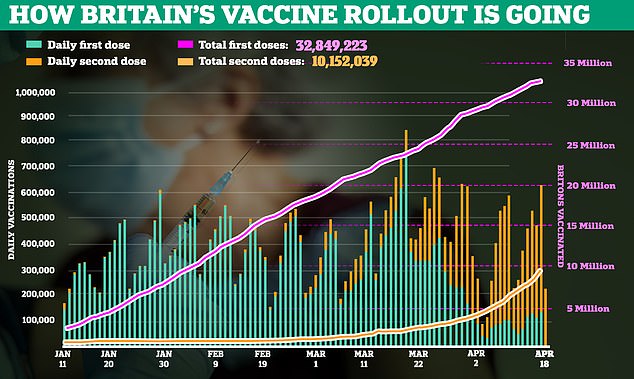 People getting their second vaccine doses now are mostly those who got their first in mid-to-late January – people aged 70 or above and others in the high risk groups.

Mr Hancock said in Parliament that three quarters of over-75s have had a vaccine as well as four fifths of over-80s.

He said the Government is ‘ramping up plans for a booster shot to make sure our vaccines stay ahead of the virus’.

AstraZeneca, Pfizer and Moderna are known to already be working on updated vaccines that are tweaked so they can tackle mutated variants.

All the current jabs are based on the original version of the virus but newer variants look different and therefore require slightly different-shaped immune cells. The current jabs still work but are less effective against these strains.

India is being added to the UK’s travel ‘red list’ after Boris Johnson cancelled his visit amid surging coronavirus cases and alarm about a new variant.

Matt Hancock told MPs today that the government had made the ‘difficult’ decision to place the country in the highest level of restrictions from 4am on Friday.

Some 103 cases of the variant first identified in India have now been identified in the UK, with the ‘vast majority’ linked to international travel, he said.

‘After studying the data and on a precautionary basis we have made the difficult but vital decision to add India to the red list,’ the Health Secretary said.

Travel from destinations on the ‘red list’ is banned, and any British residents returning home must check into quarantine hotels.

Earlier, a joint statement from the British and Indian government said Mr Johnson’s trip – already scaled back – will not go ahead ‘in light of the current situation’.

Mr Hancock said the latest move means ‘anyone who is not a UK or Irish resident or a British citizen cannot enter the UK if they’ve been in India in the previous 10 days’.

‘UK and Irish residents and British citizens who have been in India in the past 10 days before their arrival will need to complete hotel quarantine for 10 days from the time of arrival.’

‘We will be working with our current vaccine suppliers and new suppliers, like the CureVac partnership, to work out which vaccines will be effective as a booster shot and to design new vaccines specifically targeted at the variants of concern – like the variant first found in South Africa.

‘Our goal is to ensure the vaccine protects against this dreadful disease, whatever it throws at us, to keep us safe and to protect our much-cherished return to normal way of life.’

It is not yet clear when the second rollout will take place, nor whether it will include all adults or just those in the clinically vulnerable groups.

Praising the current programme, Mr Hancock said the NHS had given out record numbers of second doses on Friday and Saturday, doing a combined 999,000.

Prime Minister Boris Johnson said today: ‘Vaccines offer us the best possible protection from the virus, so it is fantastic that 10million people have now received their second dose.

‘This is another remarkable milestone in our vaccination programme, which has already saved thousands of lives.

‘I want to thank the brilliant staff and volunteers involved in the rollout, and urge all those who are called to keep coming forward.’

The Health Secretary said that, despite the threat of new variants – one from India has now been found to be spreading in England – the country is still on track to shake off its social distancing laws in June, as planned.

He said: ‘This virus is diminished but not defeated. Cases, hospitalisations and deaths are back to the levels we saw in September.

‘Throughout the crisis we’ve protected the NHS and there are now 2,186 people in hospital with Covid across the UK, down 94 per cent from the peak. And the average number of daily deaths is 25, down 98 per cent…

‘Step by step we are returning this country towards normal life and we are on track to meet the road map set out by the Prime Minister.’

The next step on the roadmap is one month away, set for May 17 at the earliest, when indoor gatherings will be allowed as well as large groups outdoors. Indoor entertainment venues will be able to reopen and international travel may be permitted. 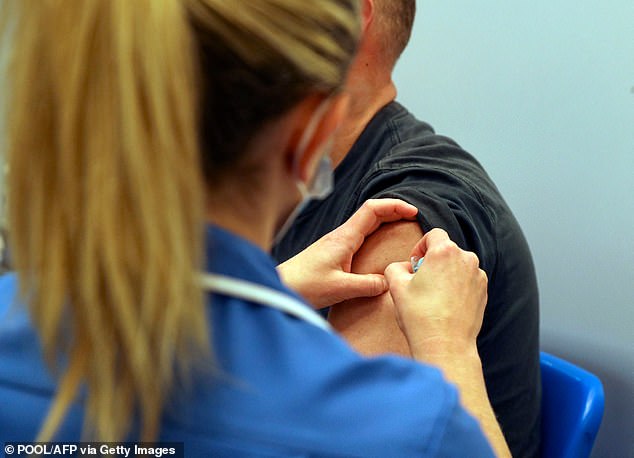 Health Secretary Matt Hancock said everyone coming forward for their second dose was ‘crucial’ to make sure their protection from the disease is long-lasting (Pictured: A man gets vaccinated in Reading)

Department of Health figures showed there were also 2,963 new infections in the past 24 hours, down 17 per cent on last week’s figure of 3,568.

Today’s Covid deaths are the lowest they’ve been since September 7 – when there were three victims – after falling almost 70 per cent compared to last Monday’s 13.

There is no indication that opening outdoor pubs, gyms and hairdressers last week, or reintroducing the rule of six late last month, has caused an uptick in cases.

Coronavirus metrics are usually low on Mondays due to the way test results and fatalities are logged, but ministers will take confidence in the fact both cases and deaths are down significantly on last Monday.

The statistics pile more pressure on Boris Johnson to speed up his roadmap out of lockdown, with the next relaxations not due for almost another month.

The thing most likely to throw the lockdown-easing plans off course, Mr Hancock said, was a variant that prevented vaccines working properly.

Most concerning is the South African strain, of which there have been 600 cases confirmed by Public Health England. This is both spreading inside the country and being brought in by travellers, and surge testing is being done to weed it out.

The newest worrying variant is one that was first seen in India.

Analysis of publicly available information on new variant numbers on Saturday suggest cases have risen to 160, suggesting it’s spreading rapidly in the community.

PHE currently lists it as a ‘variant under investigation’, a tier below other troublesome strains including the Kent, South African and Brazilian variants.

Indian officials claimed the variant had formed as a hybrid of two other strains and that it showed signs of being more infectious and less easily targeted by the immune system.

Two key mutations set it apart from others – named E484Q and L452R – with both of them found on the ‘spike’ that the virus uses to latch onto human cells.

These are not thought to be key mutations of any of the other variants on Public Health England’s list, but have appeared in virus samples before.

Sir Simon Stevens, NHS chief executive, said today: ‘This is another significant milestone and major achievement for the NHS vaccination programme, the biggest in the health service’s history and fastest in Europe.

‘Since England’s NHS became the first health service anywhere in the world to administer a Covid-19 vaccine, the programme has gone from strength to strength, with everyone in the top priority groups given the opportunity to get jabbed ahead of target.

‘The success of the NHS vaccination programme is not a happy accident. It is down to careful planning coupled with the sheer hard work and determination of doctors, nurses and countless other staff ably assisted by volunteers and many others.’

A former Facebook exec tweeted that an employee when complained to a 'large tech' CEO about the excellent of the rest room paper throughout an all-hands assembly.  His...