England’s coronavirus outbreak slowed down in the first full week of national lockdown, with daily infections dropping from 47,700 to 38,900.

Office for National Statistics data published this afternoon showed there was an 18 per cent decline in the number of people infected with the virus between November 8 and November 14.

The ONS said the rate of new infections ‘appears to have levelled off in the most recent week’ but that there are now ‘substantial differences’ between different regions.

While cases are continuing to come down in the worst-hit North of the country, where many areas were in Tier Three local lockdowns before the national measures, they are still increasing in the South and the East. Cases remain higher overall in the North but the total number is no longer rising.

This week’s report estimates that a total of 664,700 people across England were infected with coronavirus last week, which is more than at any time since the ONS started its programme. The results are based on mass swab testing of a random portion of the population.

In the past fortnight, which produced the data used in today’s report, 198,932 tests were carried out and 2,046 people tested positive in 2,257 tests. The adjusted infection rates suggest one in ever 80 people is currently carrying the virus.

Promising numbers from the ONS seem to suggest that both the Tier Three local lockdown rules and, later, the national shutdown, are successfully slowing down the spread of the virus. Experts at the statistical body said: ‘The rate of increase [in positive tests] in England has slowed in recent weeks’.

It comes as the Government’s scientific advisers SAGE are today set to release an updated estimate of the UK’s R rate, which tells us how many people, on average, are getting infected by each individual with the coronavirus. If the rate is thought to be 1.0 or lower it will mean the outbreak has stopped growing – last week it was thought to be between 1.0 and 1.2, down from 1.1 to 1.3 the week before.

Positive tests being recorded by the Department of Health have also stopped rising, with the number of positive cases getting announced each day falling for six days in a row between last Thursday and this Wednesday before a small rise yesterday. The daily average has come down for three consecutive days to 23,294. 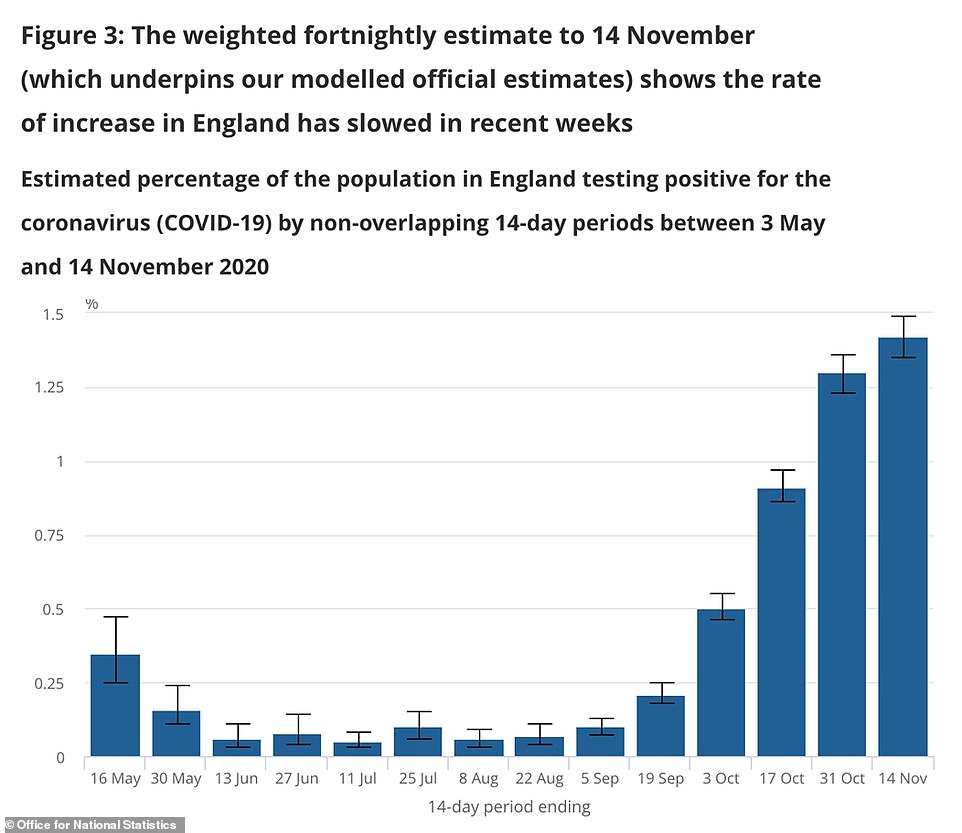 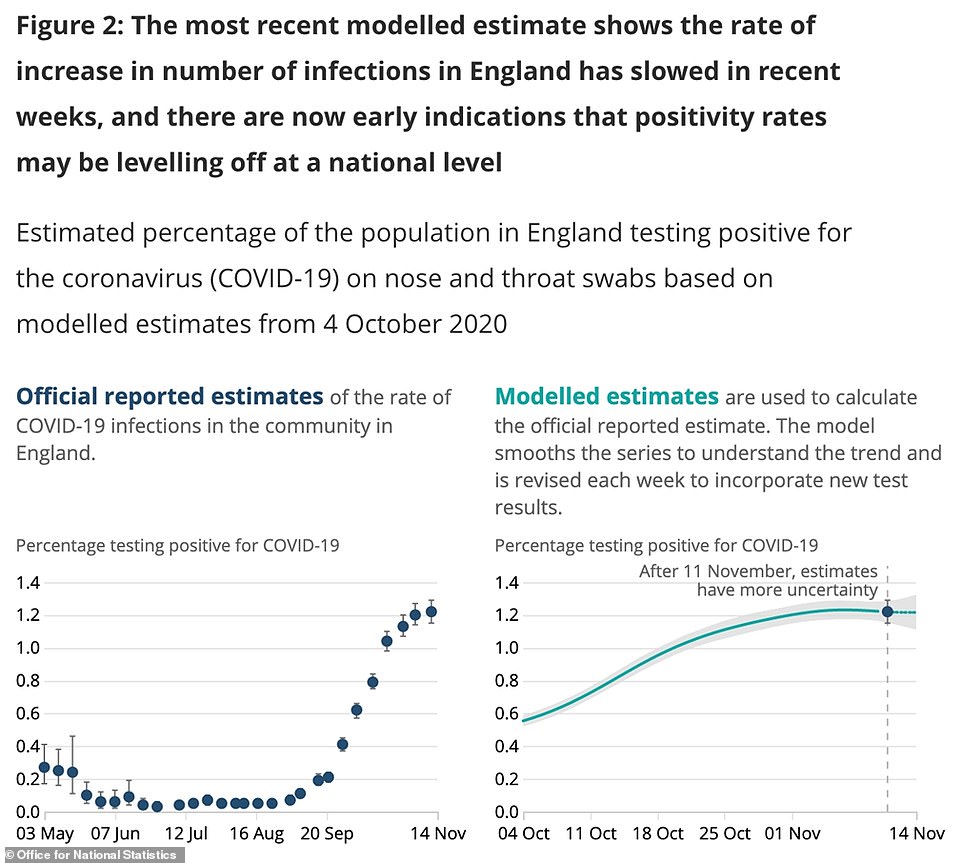 Today’s data from November 8 to 14 suggests the overall national infection rate for England is similar to the week before, but there are stark regional divides, with rates rising again in primary school aged children.

The ONS said: ‘Over the last week, infection rates have continued to increase in London, the East of England and the South East, however rates now appear to be decreasing in the North West and the East Midlands.

‘The highest Covid-19 infection rates remain in the North West and Yorkshire and the Humber.’

Katherine Kent, co-head of analysis for the Covid-19 Infection Survey, said: ‘There are early signs that the national level of infections in England might be levelling off but this hides a lot of variation at a regional level.

‘New increases appear to be driven by infections in younger people, with increasing levels in primary school age children.

‘Elsewhere in the UK, we are seeing a similar picture with increasing infections throughout October which are now decreasing in Wales and Northern Ireland and levelling off in Scotland.’

The R represents the average number of people someone with Covid-19 goes on to infect. The ZOE app team put the R in England at 1.0, and at 0.9 in Wales and Scotland.

But it said that ‘worryingly, the east of England and especially the Midlands are both seeing numbers still increasing with R values of 1.1 and 1 respectively’.

Meanwhile, the North West and the North East and Yorkshire both have R values of 0.9 as cases decline.

In the South East, London and South West, cases are not declining, the researchers said, and the R is 1.

Tim Spector, professor of genetic epidemiology at King’s College London, said: ‘The reason we are now seeing an overall R value of 1 in England is because numbers are falling in the North, rising in the Midlands and East but staying flat in the south of England.

‘The continued rise in the Midlands, despite national lockdown, is concerning.

‘This suggests an approach focused on improved compliance at regional, not national level, over a longer time frame is the best way forward.

‘We need to keep cases low enough for us to function as a nation until vaccines arrive without further harmful lockdowns.’

Meanwhile, infection rates appear to be levelling off in people aged 25 and over.

It was children, teenagers and university students who set off the second wave of coronavirus when summer ended so, although they are much less likely to die of severe Covid-19 than adults, infections among them must still be taken extremely seriously.

When modelling the level of infection among different age groups, the ONS said rates among secondary school-aged children (school years 7 to 11) now appear to be increasing again, while rates for young adults (school year 12 to age 24) appear to show early signs of levelling off.

Both these age groups continue to have the highest estimated rates of infection.

Rates are continuing to increase in primary school-aged children (school year two to six), but ‘appear to be levelling off’ in people aged 25 and over, the ONS added. 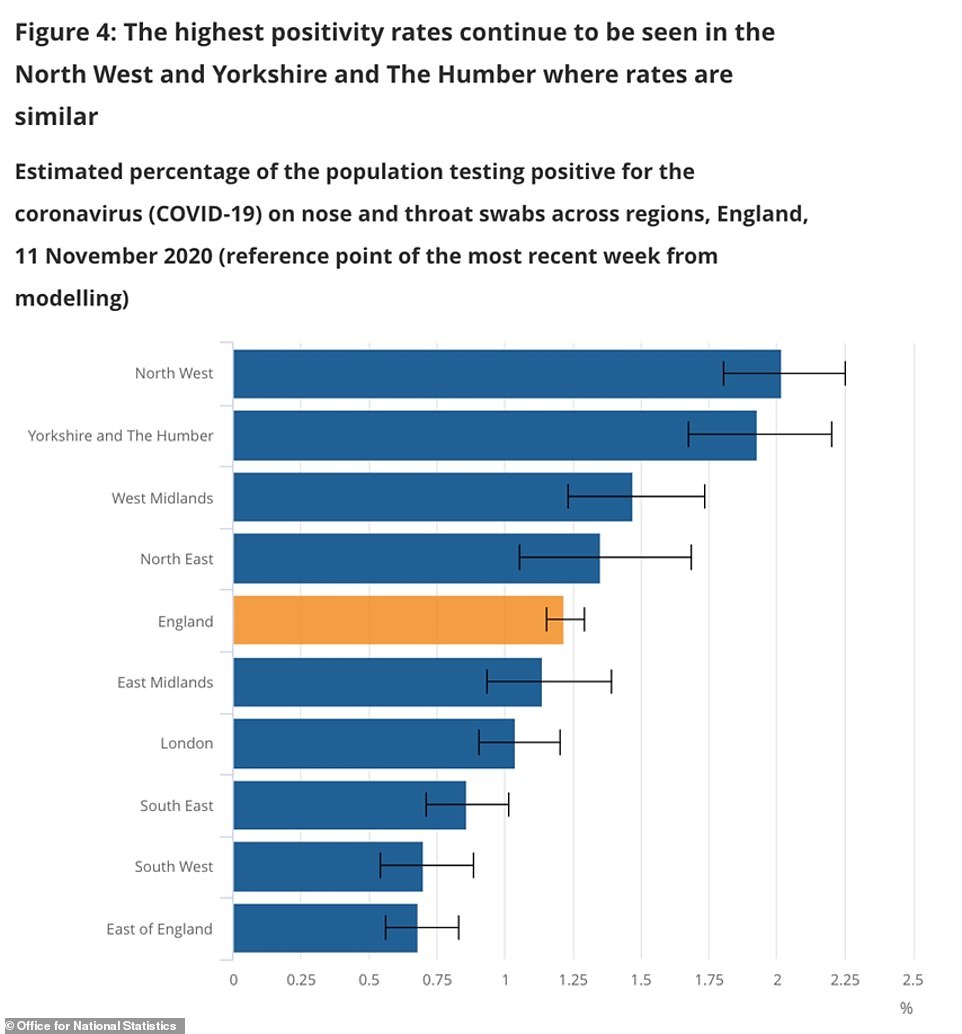 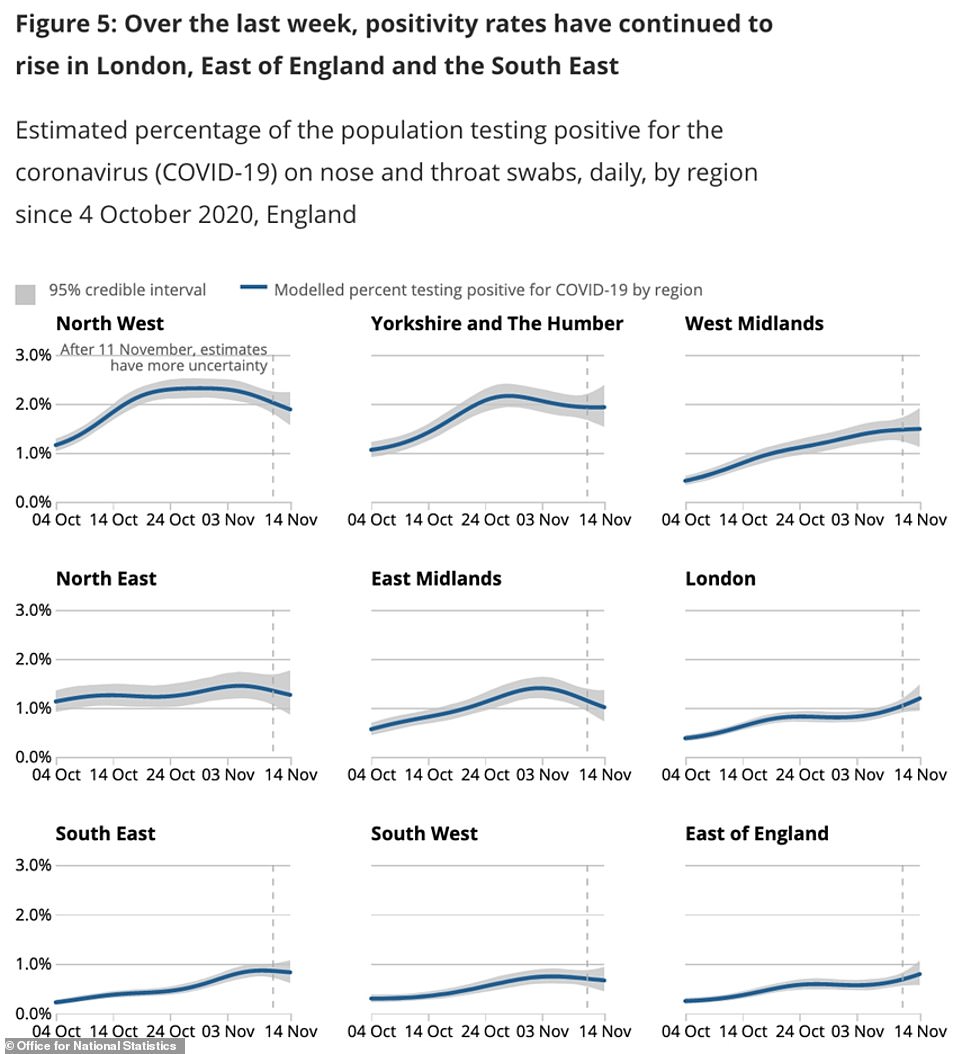 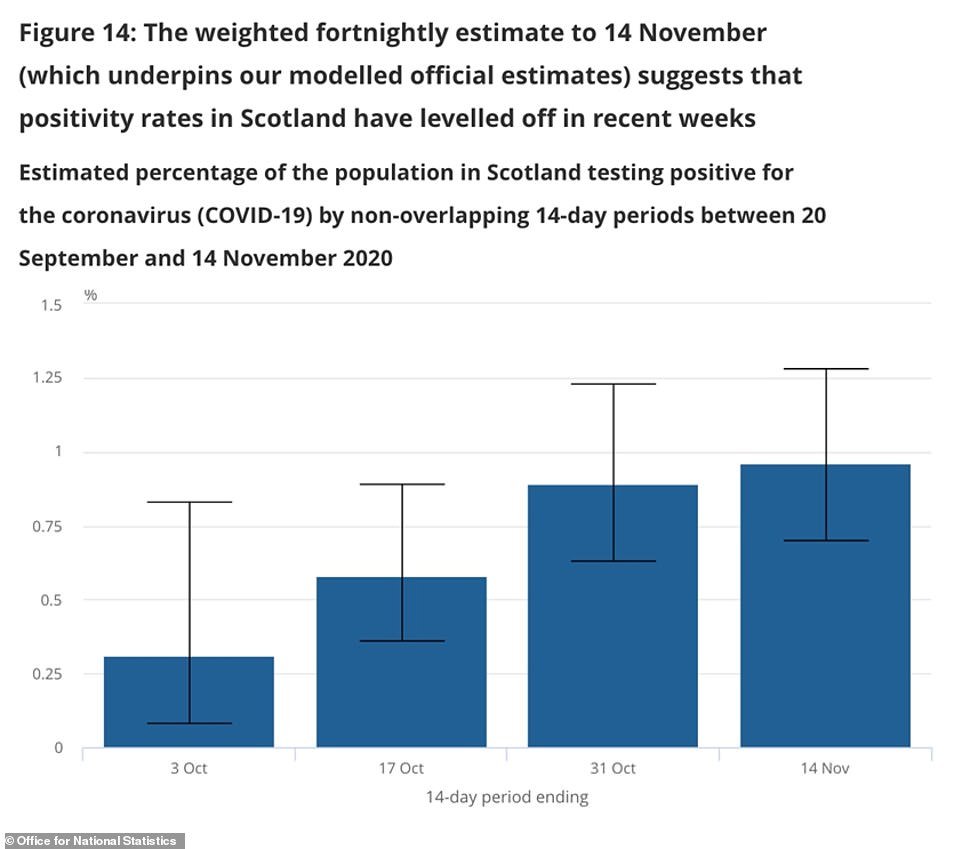 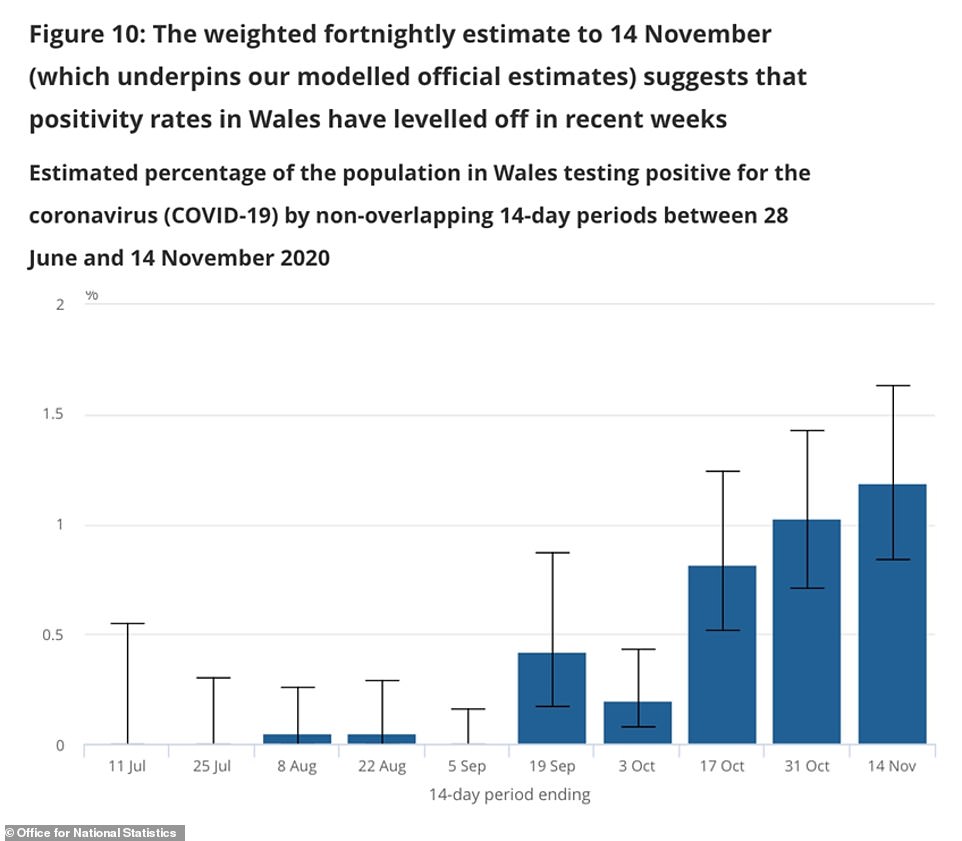 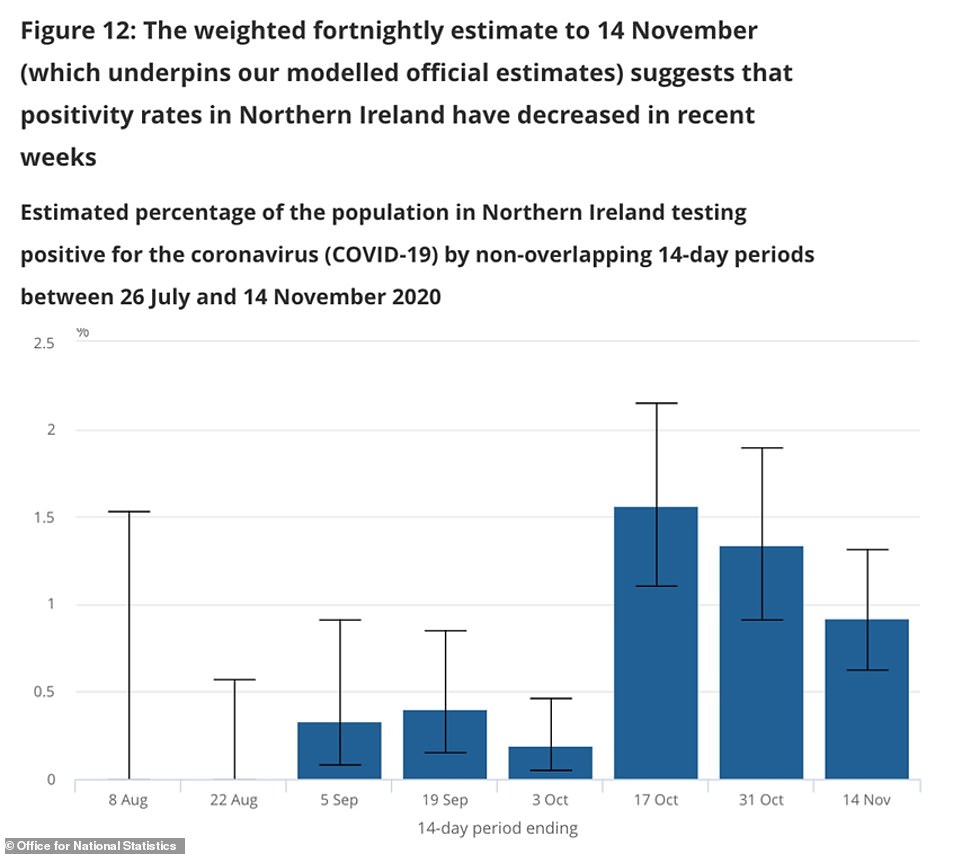