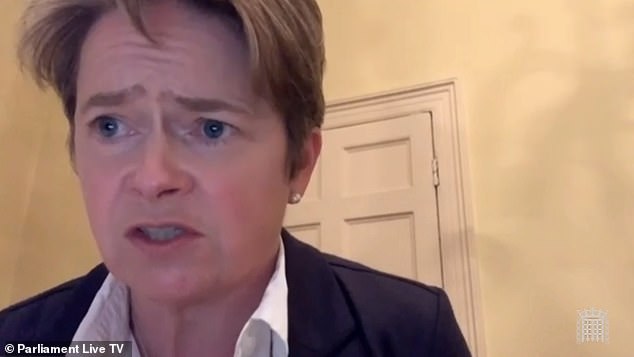 Dido Harding today said the UK is in one of the ‘leading positions worldwide’ to recognise and deal with new variants of the coronavirus.

And the NHS Test and Trace boss admitted to MPs that her biggest fear about Covid-19 is ‘what we don’t know’, saying she was certain it would present new, unknown problems in the future.

The system, which now claims to be capable of doing more than 800,000 coronavirus swab tests every day, is one of the most comprehensive in the world, Lady Harding said.

She explained that the way swabs are processed and shared with scientists means the UK has one of the best systems for tracking mutations in the virus.

The Conservative peer insisted that Test and Trace is having a ‘material impact’ on the coronavirus outbreak and could be bringing down the R rate by as much as 0.6.

She claimed the testing system had led to ‘substantially fewer’ care home outbreaks in the second wave than in the first.

But the finances behind the programme remain monstrous – David Williams, the Department of Health’s finance director, revealed that NHS Test & Trace spent £1.3billion in November and December alone and it still has 900 consultants from Deloitte alone on its pay roll, with external advisers making an average £1,000 a day.

Despite concerns about the accuracy and usefulness of lateral flow coronavirus tests, Lady Harding said the Government had ‘hundreds of millions’ stockpiled, with Mr Williams adding that Britain has already bought 623million of them. 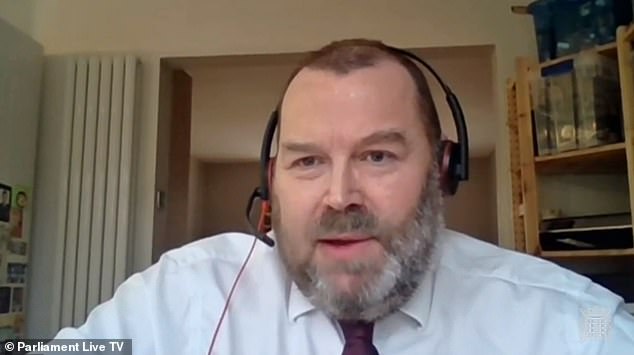 David Williams, the Department of Health’s finance director, revealed that NHS Test & Trace spent £1.3billion in November and December alone and it still has 900 consultants from Deloitte alone on its pay roll, with external advisers making an average £1,000 a day

The ability to spot and track new variants of the coronavirus as it mutates has become a hot topic in recent weeks with the emergence of more infectious strains found in Kent, South Africa and Brazil.

But the UK analyses the genetics of around 10,000 positive swab test results every week to track how the virus is changing.

It is one of the most active countries in the world at doing this, and shares its findings with a global project tracking the virus.

Lady Harding said today: ‘As we stand today our laboratories are well able to identify new variants and, as a country, we do more than half of all genomic sequencing in the world.

‘I think we can confidently say that we’re in one of the leading positions worldwide to cope with mutations. That doesn’t mean that it’s perfect but we are very well placed.’

Since the Kent variant emerged it has become the most dominant form of the virus in England, making up an estimated two thirds of all infections.

The South African variant is only confirmed to have been found twice and the most concerning variant from Brazil has not yet been detected in Britain.

Britain must keep Covid under wraps during the vaccine roll-out or it risks allowing the virus to mutate and render the jabs useless, an expert has warned.

Dr Christina Pagel, a health and mathematics researcher based at University College London, said allowing the virus to continue to spreading could give the coronavirus more time to mutate in a way that would make vaccines stop working.

The UK is already on high alert for mutations and today closed its borders to anyone who has not tested negative within 72 hours of travelling, to stop evolved variants coming in.

But there is still a risk that people will slip through the checks and that outbreaks will start again inside the country in the spring – vaccines minister Nadhim Zahawi has suggested lockdown rules could start to be lifted as soon as March.

If the virus can keep circulating it will keep mutating and, the longer this goes on for, the more likely it is that a devastating mutation will emerge. Scientists fear the virus could learn to evade vaccines and natural immunity over time.

Britain’s second wave was driven by a highly infectious variant that first emerged in Kent.

Laboratory researchers have also spotted dozens of cases of a South African variant across the UK and last week confirmed 11 samples had tested positive for one of two Brazilian variants.

Dr Pagel claimed a combination of rapid vaccination and stringent ‘suppression’ of outbreaks should continue until the majority of people have been immunised.

The NHS’s vaccine programme has made impressive progress so far, with more than half of over-80s inoculated already and a total of 3,857,266 given jabs by Saturday.

When asked what keeps her awake at night, Lady Harding said: ‘It’s so tempting to believe that we can somehow force Covid-19 to behave in a way that we have pre-determined, and yet actually this is still a very new disease and our brilliant scientists and clinicians are still continuing to learn about it.

‘What keeps me awake at night is what we don’t yet know about the path of Covid-19.

‘So continuing to build this collaborative, agile partnership across all of the public sector and private sector to fight Covid is the only way forward, I think, because I’m certain the disease is going to throw some stuff at us that we’ve not been able to anticipate.’

On the partnership between public and private services, Lady Harding defended the organisation’s decision to pay exorbitant fees to management consultants.

The Department of Health’s Mr Williams had admitted that consultants were earning an average £1,000 a day when working for the Test & Trace programme, although refused to confirm the maximum day rate when asked whether it was £7,000.

Lady Harding said: ‘I think it is appropriate to build a service in extreme emergency circumstances using short-term contingent labour and consultants for some of those roles.

‘I think they’ve done very important work alongside the public servants, the military, the healthcare professionals and members of the private sector who have come and joined us as well.

‘We couldn’t have built the service without all of that combined expertise.’

The service, which started last spring, has a controversially large £22billion budget.

Baroness Harding told MPs on Monday that close to 1,000 people per minute were tested on Sunday, January 17, and that more than 7.5million people had been successfully contact-traced since the start of the new year.

Asked about the Scientific Advisory Group for Emergencies (Sage) suggesting in September that the testing programme was having a ‘marginal’ impact on transmission, she replied: ‘There is no doubt that as we have built and scaled the service, we have learnt more and more and we are now hitting all of the operational contact tracing targets that Sage set us.

More than 4,800 boxes of ice cream are found to be contaminated with Covid in China