Violent anti-lockdown demonstrations have continued this evening across Europe as a surge of coronavirus infections have seen governments impose further lockdowns and business closures.

In Italy, where violent demonstrations have been taking place for a third night, officials have accused right-wing extremists, soccer hooligans and anarchists of using widespread discontent over new anti-virus restrictions as a pretex to wage ‘urban guerrilla’ violence.

Prime Minister Giuseppe Conte announced curfews in Rome, Naples and Milan yesterday – along with curfews on restaurants and bars and closures of gyms, pools and theatres – which he said were designed to avoid a second full lockdown.

While daytime protests by restaurant owners and taxi drivers have been largely peaceful, Lamorgese accused a variety of fringe anti-government and virus-negating groups of using the crisis as an excuse for violence, vandalism and looting. 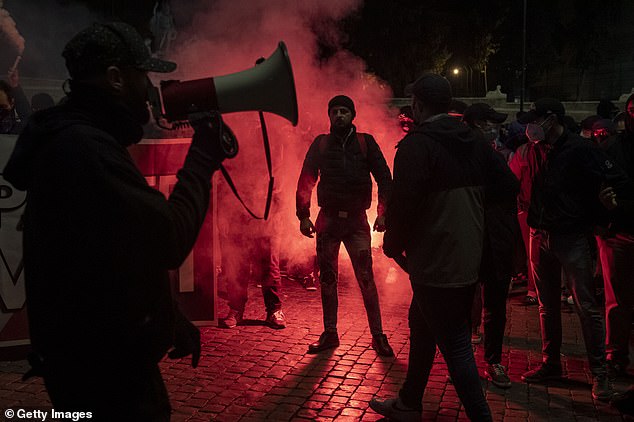 Demonstrators protest against the lockdown measures for COVID-19, tonight in Rome, Italy 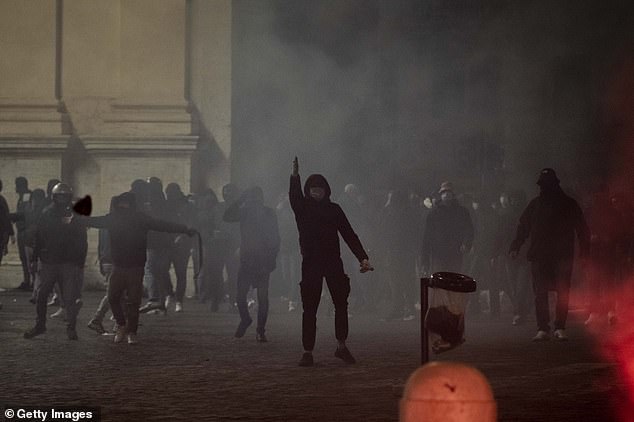 Italy registered over 21,000 new infections and 221 deaths in the last 24 hours. Anti-lockdown protestors in Rome tonight 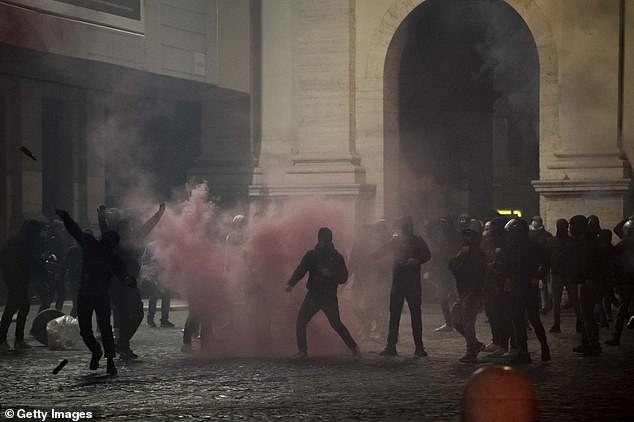 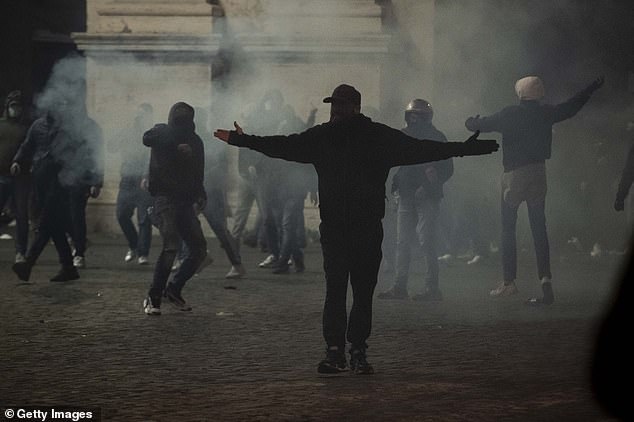 The virus is blamed for more than 250,000 deaths in Europe. Here protestors clash with Italian police in Rome tonight 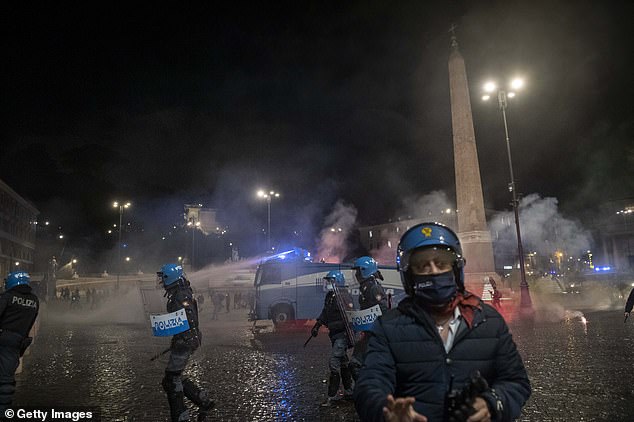 Italian police use a water cannon to disperse demonstrators at Piazza del Popolo during a protest against the lockdown, in Rome, tonight 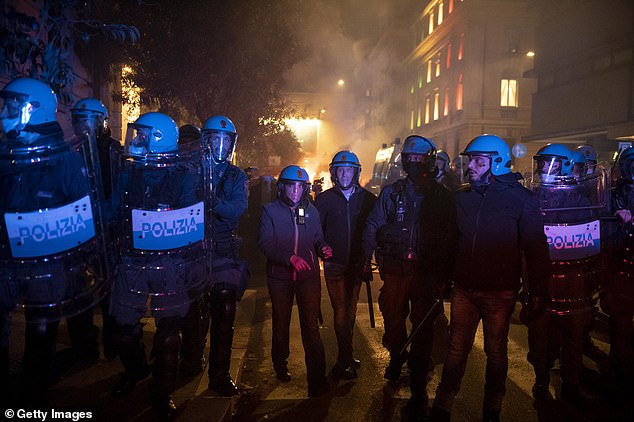 Italian police form a wall with riot shields as crowds of protestors clash with authorities in Rome, Italy, tonight 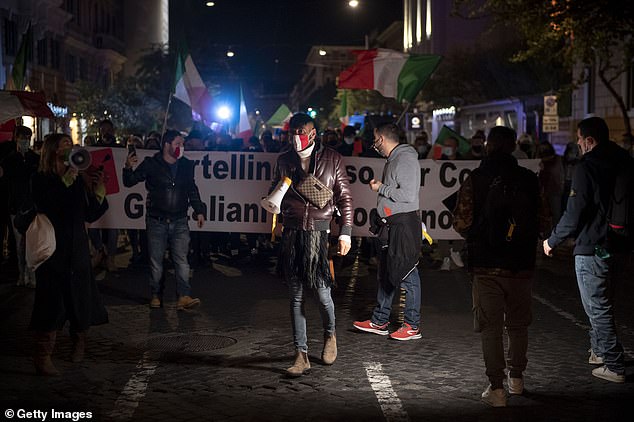 The protests were organized by far-right parties to protest against the lockdown imposed in Italy to contain the coronavirus pandemic, pictured tonight 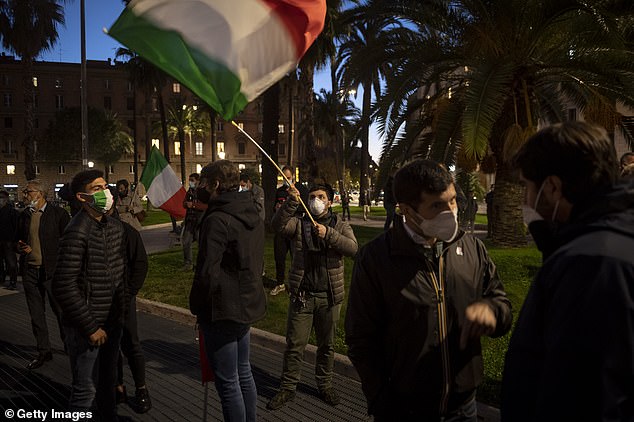 Demonstrators protest against the lockdown measures for COVID-19, tonight in Rome, Italy

Italy, where the Lombardy and Campania regions are hardest hit, has nearly 590,000 confirmed coronavirus cases and nearly 38,000 deaths, the second highest in Europe after Britain.

Nearly 1,000 people were admitted to hospitals nationwide and 125 more in intensive care.

Meanwhile in Barcelona taxi drivers and other hospitality workers gathered to protest, angry that lockdowns have led to a fall in demand. 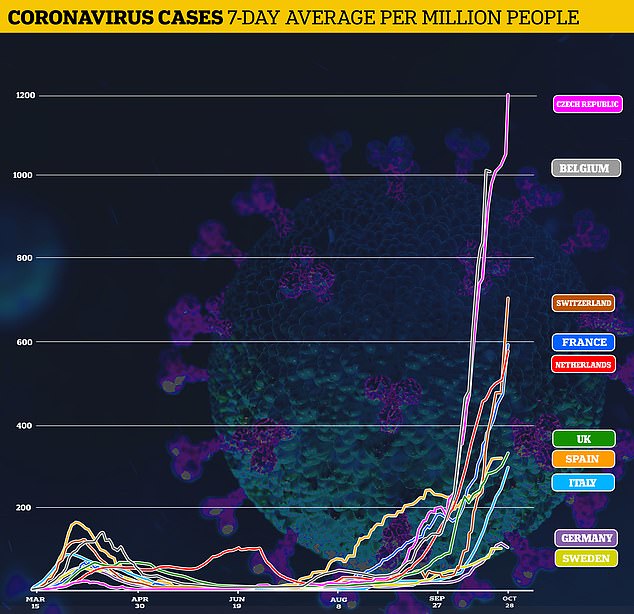 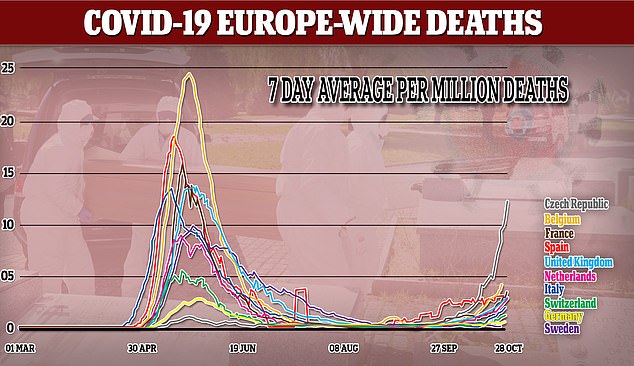 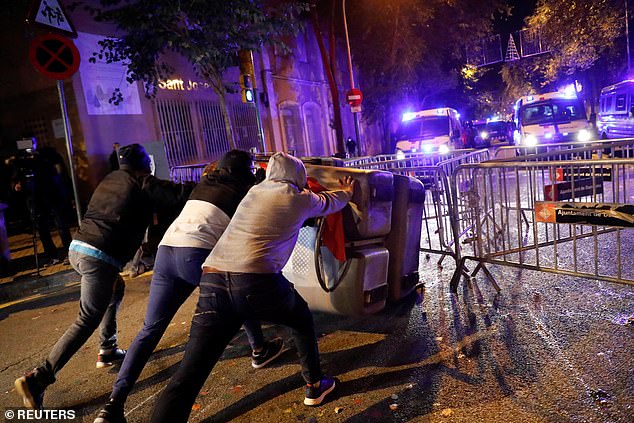 People push objects to form a barricade as they face police officers during a protest against police raids and the arrest of Catalan separatists, in Barcelona, Spain October 28, 2020 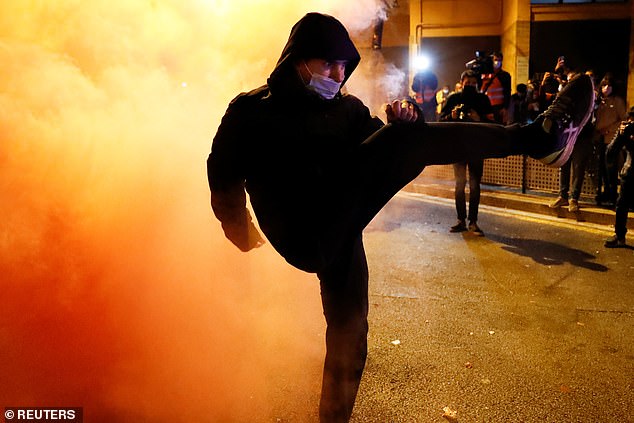 A man kicks an object as coloured smoke is seen behind him during a protest against police raids and the arrest of Catalan separatists, in Barcelona, Spain October 28, 2020 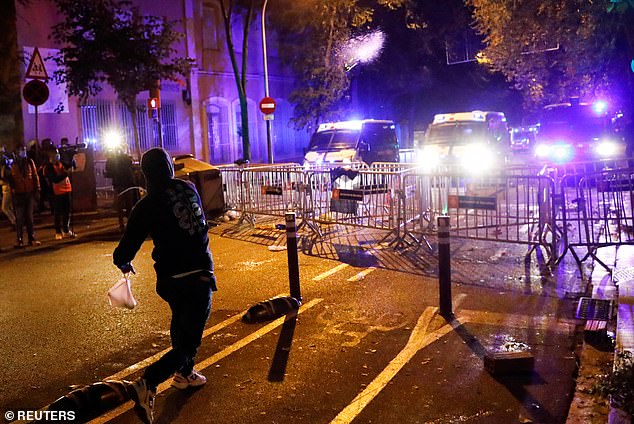 A man throws a bottle during a protest against police raids and the arrest of Catalan separatists, in Barcelona, Spain October 28, 2020 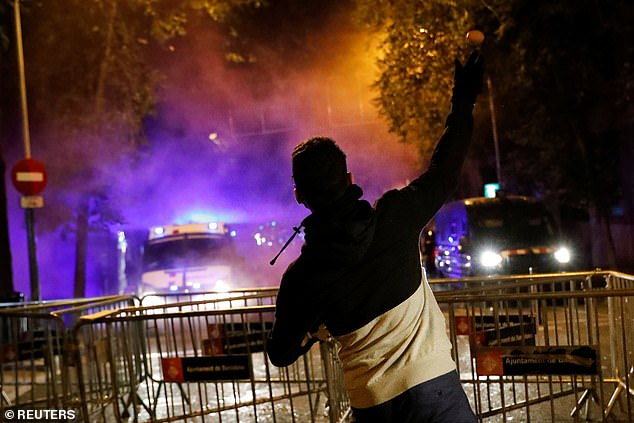 The protesters included Covid-19 deniers, as well as Catalan separatists

On Sunday, Spanish Prime Minister Pedro Sanchez declared a nationwide state of emergency that he hopes to extend for six months, along with night-time curfews.

Private social gatherings are limited to six people but larger public events are allowed under certain limits, including on how many people can attend.

The new state of emergency will initially last for 15 days but the Government plans to ask parliament for a six-month extension, meaning the restrictions – which include a 11pm to 6am curfew – could be enforced until early May 2021.

Many Spaniards are frustrated with their government’s efforts to control the pandemic, which has killed more than 35,000 people and infected over a million, making Spain one of the worst hotspots in Europe.

Vast crowds have gathered on the streets of Barcelona since the news was broken – with angry protesters setting dustbins on fire and marching while clutching signs reading: ‘F*** Covid-talism’ and ‘we are not the problem’. 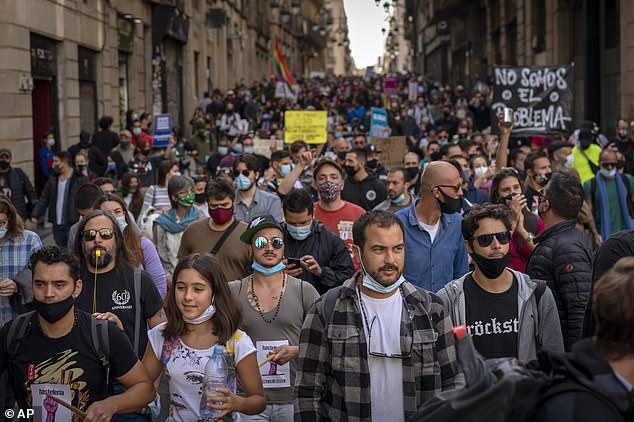 Workers of several sectors including restaurants, bars, hotel, taxi, and nightclubs march during a protest against the latest virus restrictions in Barcelona, Spain, today. Since October 14 bars and restaurants have been closed 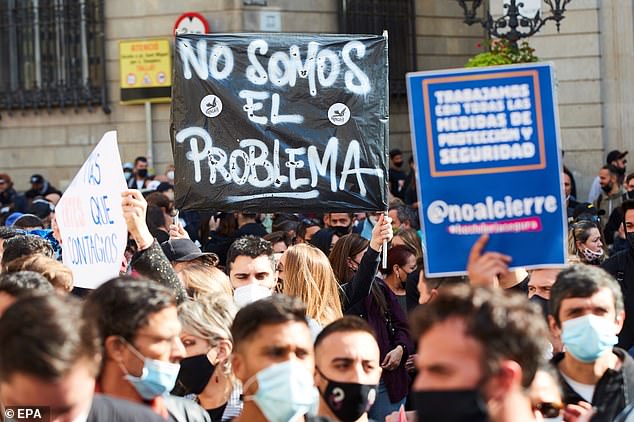 A protester holds a banner that reads ‘we are not the problem’ as workers of night clubs protest against the restrictions in the sector due to the ongoing coronavirus pandemic, that has brought the night life to a halt in Barcelona, Spain, today 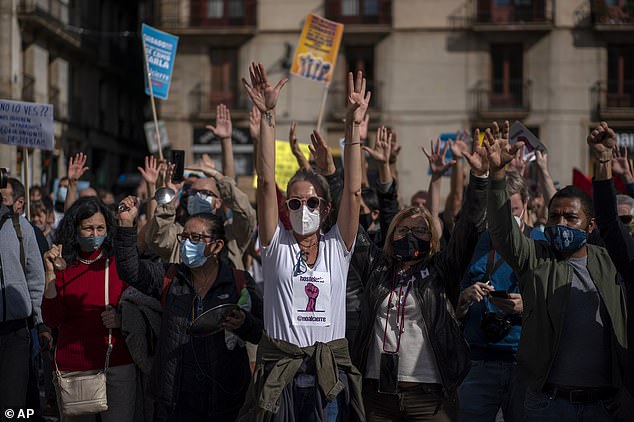 On Sunday a curfew from 10pm to 6am was imposed on Barcelona (pictured today). Still, virus cases are surging and Catalan authorities are now considering even more restrictions including weekend lockdowns

Most participants in the demonstration were wearing masks as they called for clear and effective policies to tackle the economic fall-out brought about by restrictions.

However, the protesters also included Covid-19 deniers, as well as Catalan separatists, Trotskyists and anti-capitalists spraying graffiti that said ‘Confine the rich’, according to Spanish media.

Disagreements between the Spanish government, regional authorities and the opposition have for months hampered the response to the pandemic in Spain.

This has in turn angered many Spaniards, with analysts saying that the uncertainty might reduce people’s willingness to comply with the measures. 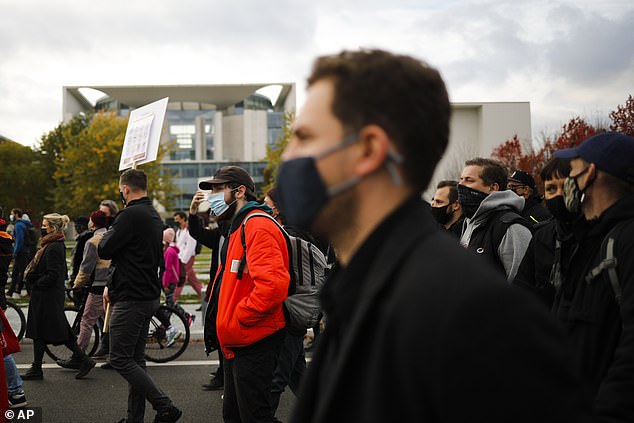 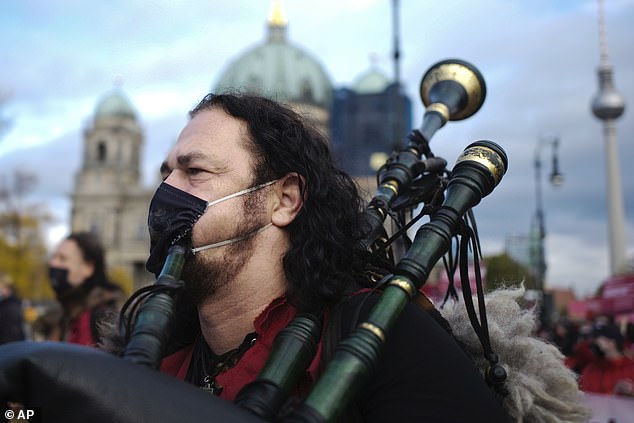 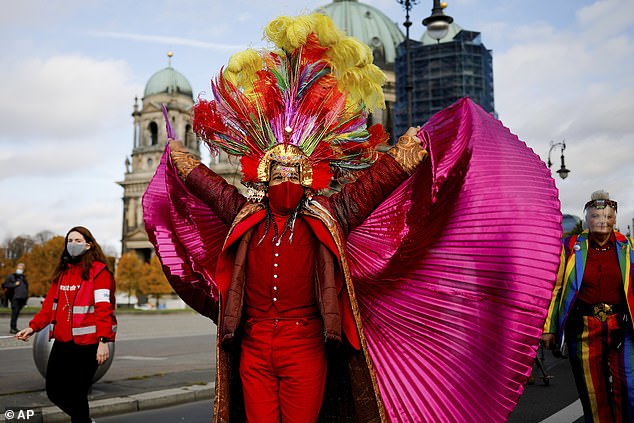 The sector demanded more support for their business as they turned up with their entertaining costumes, Berlin, Germany

In Berlin peaceful protests have taken place today by members of the entertainment industry after Angela Merkel plunged Germany back into ‘lockdown lite’, ordering all bars and restaurants to close across the country starting on Monday.

The move will also see theatres, cinemas and leisure facilities close throughout November, though unlike the first lockdown, schools and shops will be allowed to stay open. Takeaway services are also allowed.

Merkel, who announced the move Wednesday evening after agreeing it with regional governors, said it was necessary ‘to act, and now, to avoid an acute national health emergency’.

In just a few hours, the United States has experienced an example of the extreme legislative and judicial complications involved in minimally controlling access to weapons in that...

"Will gay marriage be the next ? Or the rights of transgender people? »worries Jolene Marchetti as she marches in the procession of the Pride March lesbians, gays,...

Urgent | Biden on Twitter: The G7 will continue to hit Putin’s military industrial system wherever it does the most damage | Politics news