Coronavirus: Government graph shows areas on the cusp of moving up or down lockdown tiers


How close is YOUR area to moving up or down the Covid tiers? Government graph shows how infection rates vary across England as officials say ‘continued improvement’ may mean parts of the North are de-escalated in the New Year

An official graph laying out coronavirus outbreaks across the country suggests there are parts of the North of England that could be ‘de-escalated’ in January.

The chart, published by Public Health England, shows that some parts of the country are seeing the fastest falls in infection rate and health bosses are monitoring their ‘continued improvement’.

Although much of the north of the country and the Midlands will end up in the toughest Tier Three rules when lockdown ends next Thursday, many areas may be on the way to seeing rules loosened.

Nottinghamshire and Warwickshire are already close to dropping into Tier Two thanks to falling infection rates, the graphic suggests, while rapid declines in cases in South Yorkshire, Lancashire and Derbyshire could stand them in good stead in the coming weeks.

PHE’s report said: ‘This chart shows some decreases in weekly case rates in the north of England, and other areas where case rates are high but declining. Continued improvement over the coming period may make these areas candidates for de-escalation in the New Year.’

Meanwhile, Suffolk is one of the least affected areas in Tier Two and it could even be on course to enter the coveted Tier One, currently only afford to Cornwall and the Isle of Wight.

A row broke out last night over the Government’s tiering decisions as MPs and members of the public in many Tier Three areas were outraged at having to face the harshest rules despite relatively low or improving infection rates. 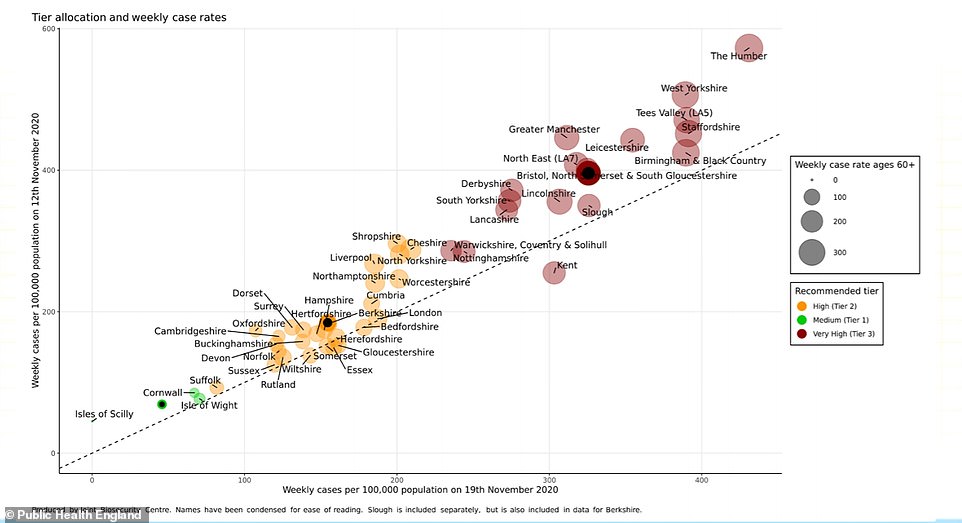 VIEW FROM NAPLES: Maradona is remembered for changing the world's view of this city above his titles

Moscow Summit: An agreement on development in Karabakh

The grieving wife of visionary INXS manager Chris Murphy has paid tribute to the 'meteor of...