Ireland will be plunged into one of the strictest lockdowns in Europe for six weeks from midnight on Wednesday even though no Covid-19 deaths have been recorded today.

The Irish Government this evening agreed to impose Level 5 restrictions which force business closures and limitations on movement across the country until December 1.

Under the new measures, the public will be told to ‘stay at home, except to exercise within 5 kilometres of your home’ and work from home unless they are essential workers.

Public gatherings except for groups of 10 at at funerals and 25 at weddings will be banned, and only essential shops will be allowed to stay open. Construction will be permitted, but pubs, restaurants and cafes will only be able to provide takeaways and deliveries.

Taoiseach Mícheál Martin will give a televised address at 9pm local time today.

Ireland has recorded a total of 49,962 cases, with another 1,283 infections added to that tally in the last 24 hours. However, fatalities remain low with just three deaths recorded on Sunday. There have been no new deaths today.

It comes as Wales was plunged into a two-week ‘firebreak’ lockdown which will see bars, restaurants and all non-essential shops close from 6pm on Friday. 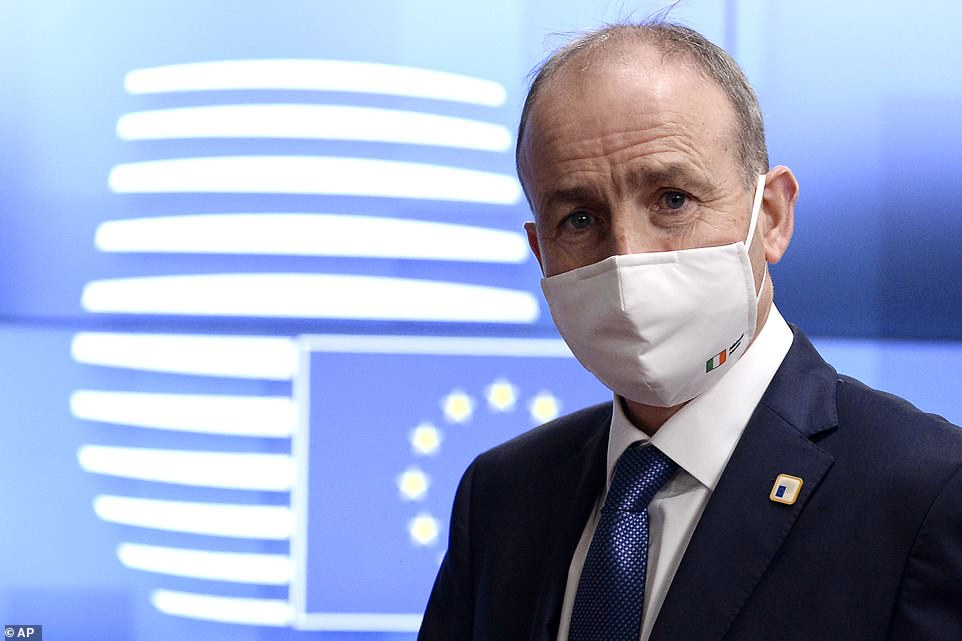 Ireland will be plunged into one of the strictest lockdowns in Europe for six weeks from midnight on Wednesday even though no Covid-19 deaths have been recorded today. Taoiseach Mícheál Martin will give a televised address at 9pm 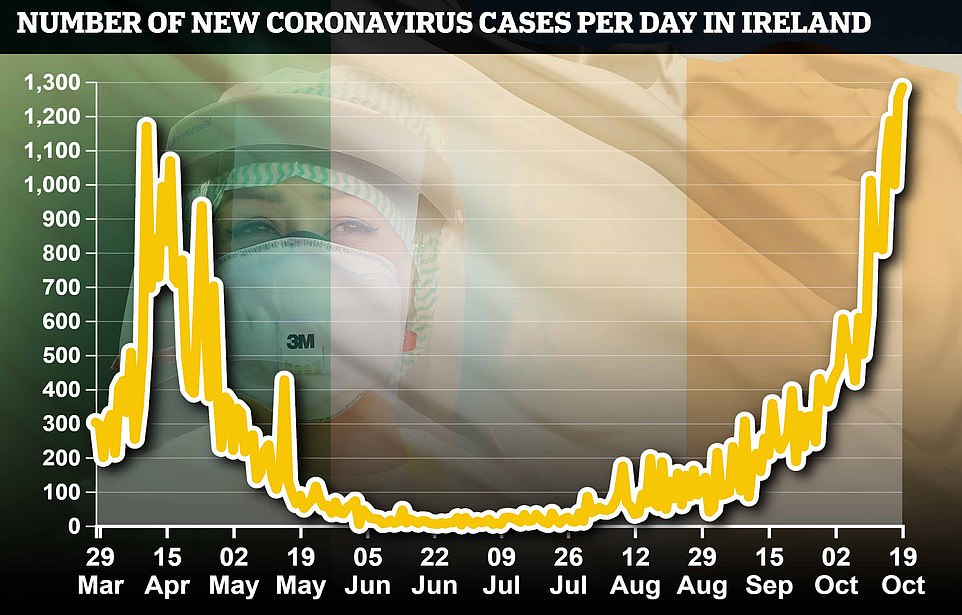 Ireland has recorded a total of 49,962 cases, with another 1,283 infections added to that tally in the last 24 hours 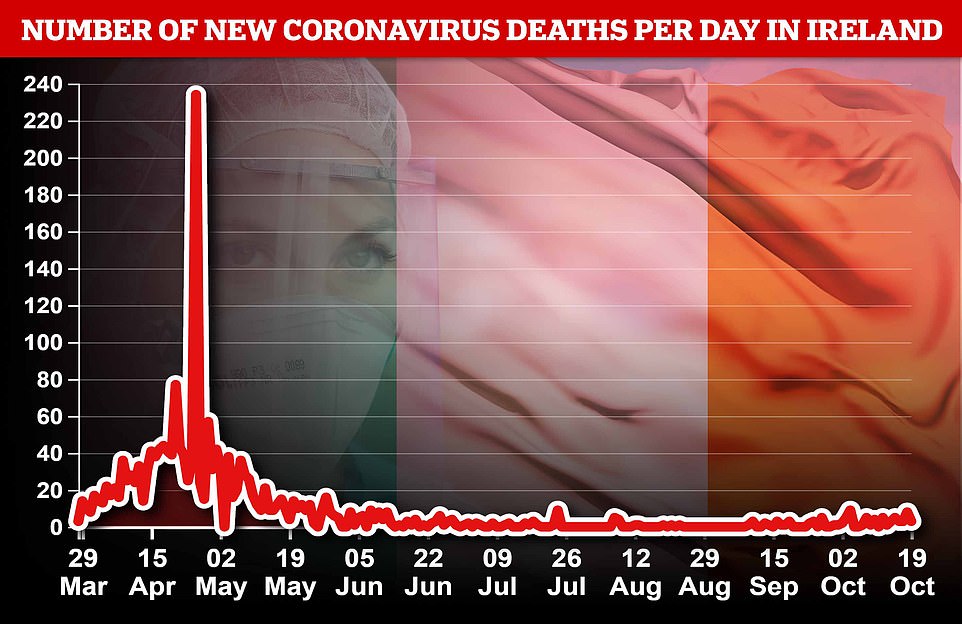 Fatalities remain low with just three deaths recorded on Sunday, adding to a total of 1,852. There were no new deaths today 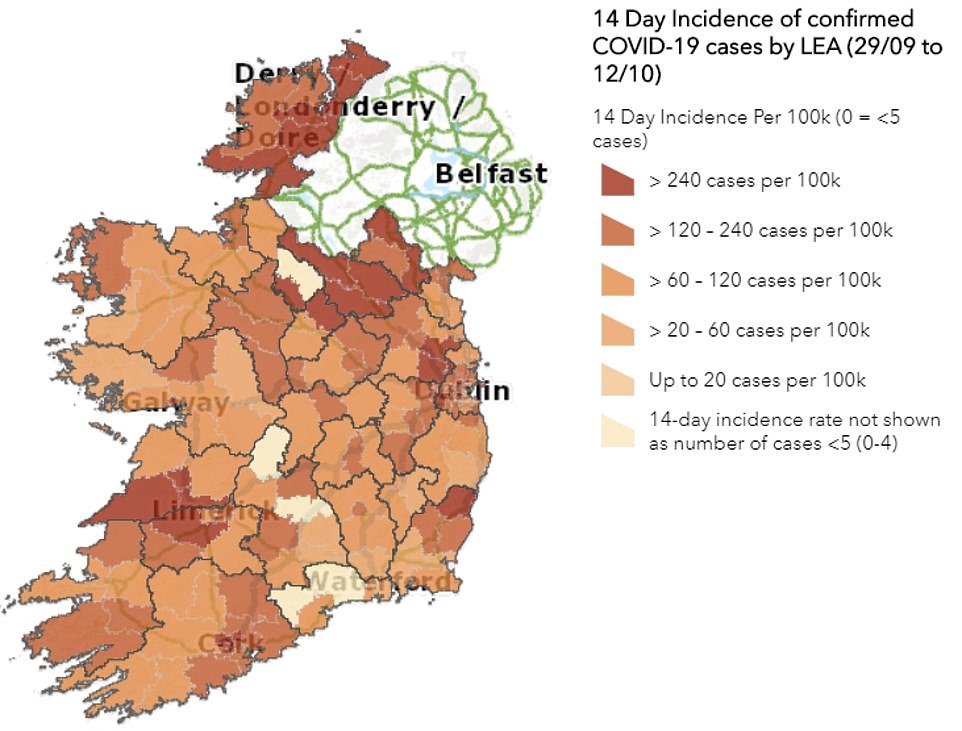 Counties Donegal, Cavan and Monaghan are currently at Level 4, while the rest of the country is at Level 3 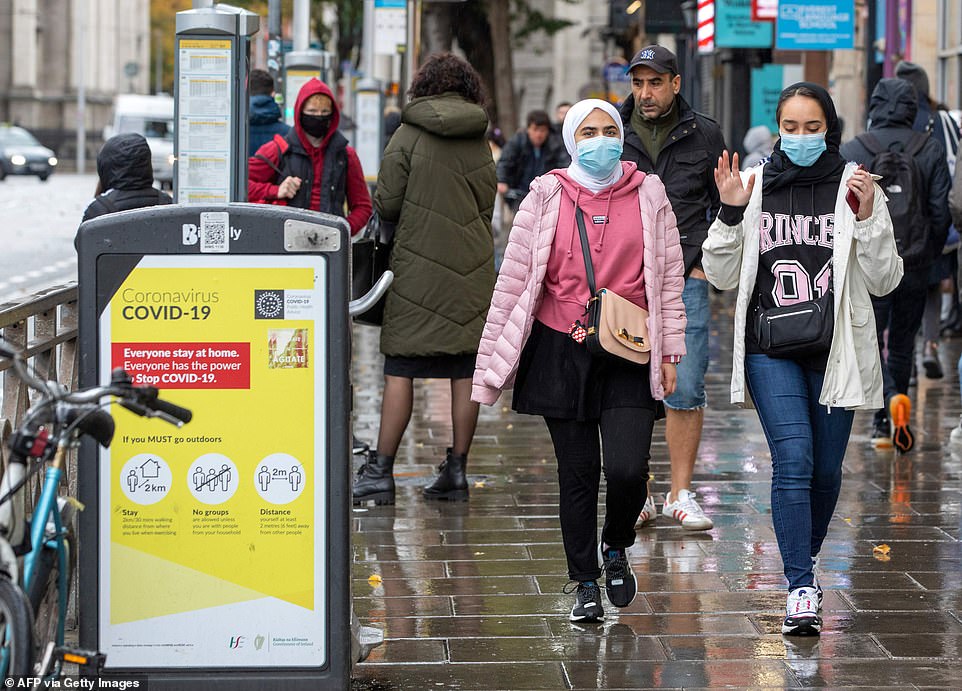 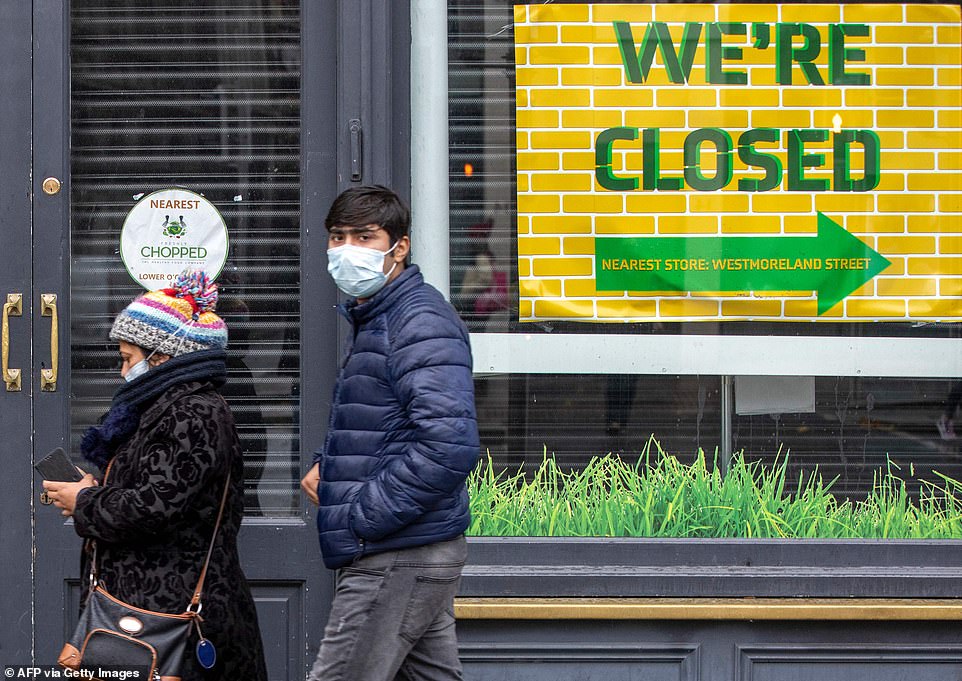 Public health officials yesterday recommended moving to Level 5 for six weeks. It was the second time in a fortnight they had advised the Government to move to the highest level of measures.

The Government did not heed the previous advice. Instead they placed the entire country into Level 3 restrictions. Currently counties Donegal, Cavan and Monaghan are at Level 4, while the rest of the country is at Level 3.

Political leaders received briefings from health officials in Dublin on Saturday about their concerns over the recent rapid spread of the virus. The Cabinet sub-committee met this morning to discuss Nphet’s latest advice.

Covid-19 will probably NEVER go away even with a vaccine – which might not be available until after spring 2021, warns Sir Patrick Vallance in another gloomy prediction about pandemic

Coronavirus will probably never disappear and a vaccine won’t stop it completely, according to Sir Patrick Vallance.

The chief scientific adviser, speaking to members of the House of Lords today, said he thought the virus will one day become like flu and cause outbreaks each year.

He said ministers and experts should stop ‘over-promising’ and be realistic about the prospects of a vaccine and the likely timeline of one.

It is not likely that a jab will be completed before spring, Sir Patrick said, echoing his earlier warnings and those of his colleague Professor Chris Whitty that the Covid-19 fight will be a long one.

In the same meeting, Sir Patrick said he still believes a flu pandemic is the biggest threat to the UK and that his office has set up a second system in case there is another crisis before the coronavirus epidemic comes to an end.

‘I think it’s unlikely that we will end up with a truly sterilising vaccine – i.e. something that completely stops infection – and it’s likely that the disease will circulate and be endemic,’ Sir Patrick said in a meeting of the Lords’ National Security Strategy Committee this afternoon.

‘That’s my best assessment and I think that’s the view of many people on SAGE that that’s a likely outcome.

‘Clearly, as management becomes better, as you get vaccination which will decrease the chance of infection and the severity of disease, or whatever the profile of the vaccines are, this then starts to look more like annual flu than anything else.

‘That may be the direction we end up going in.’

The leaders of the Government parties also met to discuss the final details of the plan ahead of the Cabinet meeting on Monday evening.

Earlier, Transport Minister Eamon Ryan indicated that any new restrictions would not be introduced immediately saying ‘you don’t just flick a switch’.

Asked about a timeline for introducing new measures as he arrived for a sub-Cabinet meeting on Monday, he said: ‘We’ll decide that.

‘I think one of the lessons previously is you don’t just flick a switch, you have to give people a wee bit of notice. But Cabinet will have to decide that.’

Green Party leader Mr Ryan said he hoped the decisions reached today would give clarity to the public.

He said: ‘I hope there can be because that’s the important part of it. The Tanaiste put it right the other day, you need a series of indicators, but that will be for Cabinet to decide. ‘

He also defended the length of time Government has taken to act on Nphet’s advice to move to level five restrictions for six weeks, which were delivered to Health Minster Stephen Donnelly on Thursday.

‘I think it’s appropriate that we try and get the arrangements and the details right in that time.’

She also called for the cuts to the Pandemic Unemployment Payment (PUP) to be fully restored.

Ms McDonald told RTE’s Morning Ireland that changes to the restrictions must be ‘balanced’ and clearly communicated because people were going to ‘really struggle’ and would be ‘worried sick’ by any new restrictions.

Counties Donegal, Cavan and Monaghan are at Level 4, while the rest of the country is at Level 3.

On Sunday, it was reported that a new lockdown would last for four weeks, but it has since emerged that ministers are being asked to back six weeks.

Gaelic games, horse and greyhound racing are still permitted behind closed doors, under the Level 5 rules.

Non-contact sports training for children and young people can continue outdoors but only in pods of 15. Funerals will be limited to 10 people.

It comes as Welsh First Minister Mark Drakeford today said that everyone in Wales will be ordered to ‘stay at home’ unless they are critical workers or are unable to work from home.

The Labour chief warned failure to act now would mean ‘more people will die’ as he said households will be banned from mixing indoors and outdoors while exercise outside will be allowed but it must ‘begin and end at home’.

Primary schools will reopen after half-term next week but secondaries will only reopen years seven and eight, and for pupils doing exams.

The decision to impose a ‘short and deep’ lockdown until November 9, which echoes national demands made by Sir Keir Starmer and wipes out Halloween and Bonfire Night, has sparked a furious political backlash after statistics suggested Wales has a lower coronavirus infection rate than England.

Do a deal on Tier 3 today or else, ministers warn Greater Manchester

Ministers sent an ultimatum to Andy Burnham and mutinous Greater Manchester MPs that they must do a deal on Tier Three lockdown today – or face being forced into tougher coronavirus curbs.

Housing Secretary Robert Jenrick warned that talks had gone on ‘too long’ and the government could force the issue as early as tomorrow unless the region accepts a package of funding to ease the impact, thought to be worth up to £100million.

The threat came after doctors voiced alarm that Manchester is at risk of running out of hospital beds for COVID, with the bitter standoff now having delayed a clampdown by days.

Haggling is also continuing with Nottingham and Yorkshire over the possibility of shifting to Tier Three, which could put a total of seven million people under heightened restrictions.

But along with the war of words with Mr Burnham and Labour, the wrangling is also at risk of tearing the Conservative Party apart – as local MPs including 1922 committee chair Sir Graham Brady dismiss the need for the highest levels of restrictions.

There was a brutal response from ‘Red Wall’ MPs on Tory WhatsApp groups after colleagues from Tier One sent a letter to Mr Burnham urging him to ‘engage’ with the Government’s regional approach in order to spare other areas ‘pain’.

The ‘firebreak’ step was criticised by Welsh Tories, who said it was dooming Wales to an endless cycle of two-week lockdowns while Conservative MPs in Westminster said it was a ‘blunt instrument’ and ‘closing down the whole of Wales is disproportionate to the level of risk in some parts of the country’.

They also lashed out at Mr Drakeford, accusing him of ‘small man syndrome’, with one MP telling MailOnline: ‘You have got somebody who is the head of what is essentially smaller than the West Midlands but where they have got a mayor, Wales has a first minister.

‘He is trying to show he is an equal to Boris Johnson. He wants to be regarded as his equal but he is not.’

However, the move has heaped pressure on Mr Johnson who has been desperately resisting the option in England despite backing from his own SAGE experts.

Mr Hancock said talks would take place with local leaders in South Yorkshire, West Yorkshire, Nottinghamshire, the North East and Teesside after deals were agreed for Liverpool and Lancashire.

But it came amid a continued stand-off with Greater Manchester. Ministers have sent an ultimatum to the area’s Labour mayor, Andy Burnham, and mutinous MPs that they must do a deal on today – or face being forced into the tougher curbs as early as tomorrow.

Housing Secretary Robert Jenrick warned that talks had gone on ‘too long’ and urged the region to accept a package of funding worth up to £100million.

Downing Street attempted to pile pressure on the Mancunian rebels today by warning that the region’s hospitals are on track to be overwhelmed by October 28 unless the coronavirus outbreak is brought under control.

Mr Hancock told MPs in the Commons this afternoon:  ‘Following the successful introduction of measures in Liverpool and Lancashire, talks are continuing this afternoon led by (the Communities Secretary) with Greater Manchester, and this week further discussions are planned with South Yorkshire, West Yorkshire, Nottinghamshire, the North East and Teesside.’

But along with the war of words with Mr Burnham and Labour, the row is also at risk of tearing the Conservative Party apart – as local MPs including 1922 committee chair Sir Graham Brady dismiss the need for the highest levels of restrictions.

There was a brutal response from ‘Red Wall’ MPs on Tory WhatsApp groups after colleagues from Tier One sent a letter to Mr Burnham urging him to ‘engage’ with the Government’s regional approach in order to spare other areas ‘pain’.

The intervention – which many believe was orchestrated by Downing Street – sparked furious private rows about an ‘all-round shafting’, with one MP reportedly jibing at another: ‘You just want a promotion and you’re happy to throw colleagues under a bus to achieve it.’

Tonight a government spokeswoman said the latest meeting had ended. ‘Disappointingly, we have still not been able to reach an agreement. This is particularly concerning against the backdrop of rising cases and hospitalisations in Greater Manchester. We are carefully considering next steps,’ she said.

Opinion: It's time to let Jalen Hurts play, and play everywhere, for the Eagles