‘Covid toes’ that turn purple from the disease can last for at least five months after survivors beat the infection, scientists have found.

Inflammation of the toes caused by Covid-19 can lead to red or purple skin, swelling and chilblain-like blisters. The symptom typically develops within a week of getting infected and goes naturally within a fortnight.

But in some people, the skin problem has become a manifestation of ‘Long Covid’, lasting for months after patients have fought the virus off.

Dermatologists who conducted the research fear the cases they have seen are ‘just the tip of the iceberg’, and that it is in fact a common presentation of the virus.

Previous research estimates that around one in 12 people with coronavirus develop some kind of skin complaint, and experts have repeatedly called for health chiefs to recognise it as an official symptom. 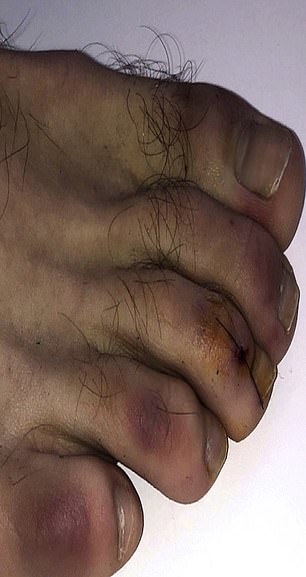 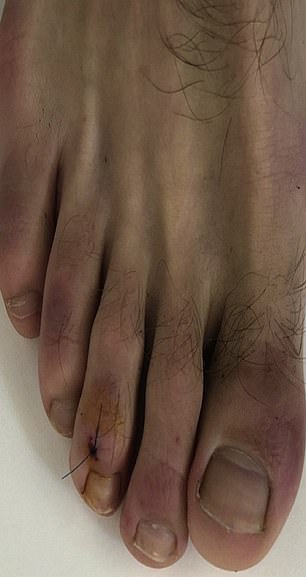 ‘Covid toes’ that turn purple from the disease can least for five months after infection, scientists have found 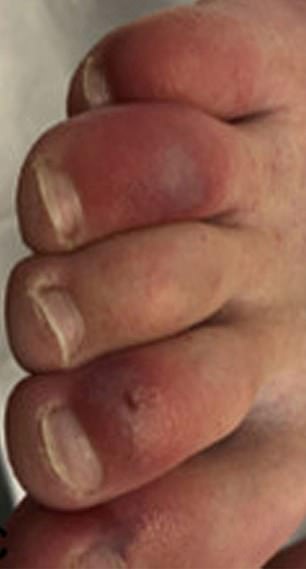 Inflammation of the toes caused by Covid-19 can lead to red or purple skin, swelling and chilblain-like blisters

The latest study was conducted by researchers at Massachusetts General Hospital (MGH).

Scientists established an international registry for Covid-19 skin manifestations in April 2020, in collaboration with the International League of Dermatological Societies and the American Academy of Dermatology.

Doctors who entered patients into the register in April were contacted in June and August to update the duration of patients’ Covid-19 skin symptoms.

Almost 1,000 cases of patients with skin manifestations of Covid-19 in 39 countries were recorded.

About half of the patients in the registry were reported to have Covid toes and about 16 per cent of those had to be hospitalised from the disease, figures showed.

HOW DOES COVID AFFECT YOUR TOES?

‘Covid toes’ is just one of many skin manifestations reported in patients.

Dr Esther Freeman, principal investigator of the International Covid-19 Dermatology Registry, said: ‘The skin can be viewed as a window into the rest of the body because it is inflammation which you can see – and can be indicative of inflammation elsewhere.’

Dr Faheem Latheef, a consultant dermatologist and skin allergy specialist, said normally skin symptoms are caused by the body’s immune system, not the virus itself.

‘The main reason is a hypersensitive immune reaction,’ he told MailOnline in April. ‘It’s the body’s reaction to something it perceives as foreign.’

Researchers at King’s College London called for skin rashes to be considered as the fourth key symptom of Covid-19 in July, after a cough, fever and loss of taste and smell.

Using data from the COVID Symptom Study app from around 336,000 regular UK users, researchers discovered that 8.8 per cent of people reporting a positive coronavirus swab test had experienced a skin rash as part of their symptoms.

This compares with 5.4 per cent of people with a negative test result, showing it is more common in those who have the coronavirus and therefore must be caused by it.

Dr Adil Sheraz, a consultant dermatologist and spokesperson told MailOnline in April: ‘A variety of skin manifestations have been seen in Covid-19 positive patients.

‘However we are uncertain whether these are directly related to the virus itself or to the complications of the infection.

‘If you develop a new rash then please speak to your GP or dermatologist. Almost all dermatologists are offering virtual consultations and even face to face in urgent cases. A diagnosis of Covid-19 should not be made from just the presence of a rash.’

Of those who had ‘Covid toes’ — which is chilblains, redness or swelling of the feet and hands — symptoms lasted for 10 to 15 days, on average.

And one of the researchers warned some were still suffering from ‘Covid toes’ 150 days later — the equivalent of around five months.

The findings, which will be presented at the European Academy of Dermatology and Venereology (EADV) Congress in Switzerland this week, point to another burden experienced by so-called ‘long haulers’.

Dr Esther Freeman, principal investigator of the International Covid-19 Dermatology Registry, said: ‘It seems there is a certain sub-group of patients that, when they get Covid, they develop inflammation in their toes, which turns them red and swollen, and then they eventually turn purple.

‘In most cases, it is self-resolved and it goes away. It is relatively mild.

‘It lasts on average about 15 days. But we have seen patients lasting a month or two months.’

She added: ‘What is very surprising is when you get beyond that 60-day mark — because it’s not like patients are resolving at day 70.

‘It’s the fact that some of our patients are at over 150 days now — these are patients with red or purple or swollen toes for many months.’

She said: ‘We are starting to see long Covid in other organ systems, this is the first time we are recognising this can happen in the skin as well.

‘I think it raises a lot of questions about what sort of inflammation is going on — is there inflammation elsewhere in the body?

‘We don’t really know the answer yet.

‘The skin can be viewed as a window into the rest of the body because it is inflammation which you can see – and can be indicative of inflammation elsewhere.’

The figures were submitted by doctors treating patients with skin issues in dozens of countries around the world.

Researchers at King’s College London called for skin rashes to be considered as the fourth key symptom of Covid-19 in July, after a cough, fever and loss of taste and smell.

Their research found characteristic skin rashes and ‘Covid fingers and toes’ can occur in the absence of any other symptoms and affects around 8.8 per cent of patients.

WHAT ARE THE FIVE SKIN CONDITIONS LINKED WITH CORONAVIRUS?

Dermatologists warned of five skin symptoms that may be a sign of the deadly infection after studying 375 patients in Spain in April.

The research, published in the British Journal of Dermatology, found the following complaints in patients who had an unexplained skin ‘eruption’ in the last two weeks and who had suspected or confirmed COVID-19:

Identified in 47 per cent of cases, the rash consists of small, flat or raised red bumps. It lasts eight days on average.

The average age or disease severity was not described for this condition.

2. ‘Acral areas of erythema-edema with some vesicles or pustules’

These small red or purple spots caused by bleeding under the skin were seen in around 19 per cent of patients.

They affect the hands and feet and resemble itchy swelling of chilblains.

They were seen mostly in young patients, lasted around 13 days, appeared later in the course of disease in less severe cases.

Also known as wheals, these lesions these consist of pink or white raised areas of skin resembling a nettle rash.

They lasted an average of seven days and found in more severe cases of COVID-19.

These occurred in nine per cent of cases. They were described as outbreaks of small blisters, commonly itchy, that mostly appeared on the trunk of the body but sometimes the limbs.

Middle-aged patients reported the blisters the most. The symptom lasted on average ten days, and were linked with intermediate severity of the disease.

This was identified by dermatologists in six per cent of cases, mostly the elderly who were severely ill.

Livedo occurs where circulation in the blood vessels of the skin is impaired, causing it to take on a blotchy red or blue appearance with a net-like pattern. Necrosis describes the premature death of skin tissue.

The study said patients showed different degrees of lesions pointing to ‘occlusive vascular disease’, where a narrowing or blocking of arteries occurs, limiting blood flow to certain areas of the body.

Coronavirus: Doctors, nurses and health workers 'burning out', warns WHO

Election got you down? Here are 10 places where you can see rainbows

The big transfers that could STILL happen as Deadline Day approaches

Several beloved brands are returning to Australia after being sold overseas

Price: (as of - Details) The 50 liter Boot Pack has several roomy pockets for...