Retail sales in Britain rose for the fifth month in a row after they were boosted by non-food items such as DIY and garden supplies, official figures revealed today.

Sales volumes rose by 1.5 per cent between August and September, which was almost twice the size of the previous month’s increase of 0.8 per cent.

Fashion stores continue to struggle and could miss out as restrictions limit the Christmas party season, but food and DIY remain popular and the shift to internet orders saw 27.5 per cent of sales online, compared with 20.1 per cent in February.

The Office for National Statistics data released this morning also revealed that sales are now 5.5 per cent higher than those seen in February, before the pandemic.

Retail sales volumes are also now 4.7 per cent higher than a year earlier, taking the annual rate of increase above all forecasts in a Reuters poll of economists. 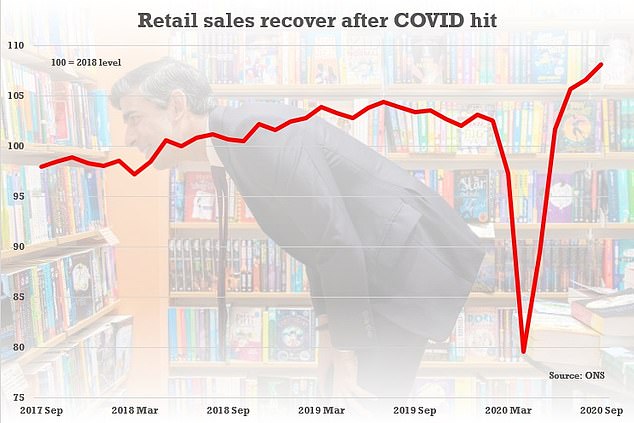 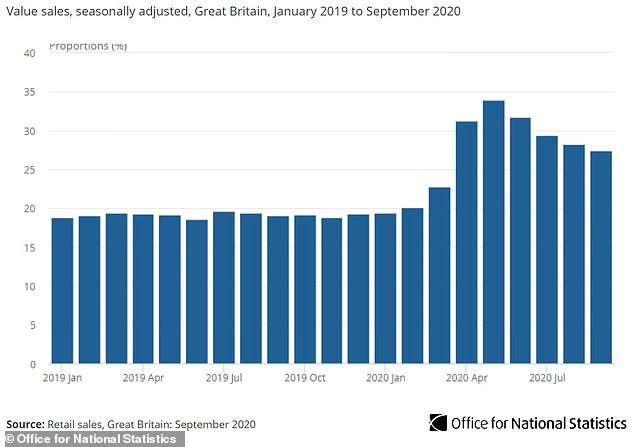 The ONS data also revealed that in the three months to September, retail sales volumes increased by 17.4 per cent when compared to the previous three months.

This made it the biggest quarterly increase on record as sales picked up from record-low levels experienced earlier in the year, according to the statisticians.

However, fuel sales volumes last month were still 8.6 per cent below February with reduced travel as many continued to work from home.

Clothing sales volumes were also still 12.7 per cent below February, but home improvement sales continued to do well in September.

The latter were boosted by increased sales in household goods and garden items within ‘other’ non-food stores. 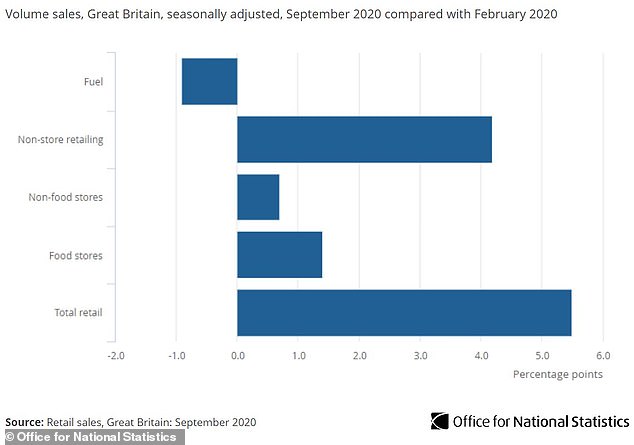 Last month, fuel was the only negative contribution to the overall recovery in retail sales when compared with February, according to data from the Office for National Statistics

Jonathan Athow, the ONS deputy national statistician for economic statistics, said: ‘Retail sales increased again in September, the fifth consecutive month of growth since the record falls seen at the start of the pandemic.

ANALYSIS: Challenges lie ahead for retailers as they enter the critical Golden Quarter

With subdued footfall following August’s bounceback coinciding with Eat Out To Help Out, we might have expected retail sales to slow down commensurately.

But there’s been no sign of this. Excluding petrol, retail sales increased by 1.5 per cent in September on an already strong August, and by 6.0 per cent compared with this time last year.

In fact, almost every measure of retail sales saw growth last month, with even non-grocery in-store sales above pre-pandemic levels, in spite of lower footfall levels, and the continued popularity of online shopping – now 27.5 per cent of total UK sales.

This is a clear continuation of trends we’ve seen in previous months, with PwC’s measure of consumer sentiment both robust and better than this time last year, and some consumers having saved money by postponing holidays and going out less.

The grocery sector received a bounce as consumers started to revert to eating at home and with early signs of stocking up for Autumn.

However, as retail enters the critical Golden Quarter in the run up to Christmas, challenges lie ahead.

Local lockdowns and the discouragement of non-essential travel are likely to depress high street footfall further.

And in Wales they are going as far as the closure of non-essential retail from this weekend.

As the Government Coronavirus Job Retention Scheme winds down to be replaced by less generous programmes, the prospect of increased unemployment may weigh on consumer spending in future months.

Retailers will have their fingers crossed that the positive momentum that has brought them out of the first national lockdown as one of the strongest sectors of recovery can last until the end of the year.

‘Food stores and online retailers have fared particularly well in recent months, and most other store types have now recovered to pre-pandemic levels too after being subject to temporary closures during restrictions in the spring. Spending on home improvement and gardening items in particular have boosted sales.

‘Clothing store sales have been slower to recover and fuel sales remain subdued as people continue to work from home and have reduced the amount they travel.’

Strong household demand has been the mainstay of Britain’s recovery from the initial shock of the coronavirus lockdown, when output contracted by 20 per cent, more than in any other major advanced economy.

Emma-Lou Montgomery, associate director for personal investing at Fidelity International, said: ‘Whether this new-found and much-needed consumer trend continues, remains to be seen – especially as more of the UK enters tight local restrictions and more jobs are put at risk.’

She added: ‘As we edge closer to typically the busiest shopping period of the year, with Black Friday a month away, retailers, across all sectors and in store and online, will be hoping that festive cheer will drum up enough business to help them through to 2021.’

Britain’s economy is set to record a rapid rebound for the third quarter, but rising coronavirus restrictions are damaging consumer morale and weighing on the broader economy.

Thomas Pugh of Capital Economics said: ‘Total consumer spending will probably start to stutter over the next few months as the furlough scheme ends and unemployment rises, despite the increased generosity of the Job Support Scheme.’

British consumer sentiment fell this month by the most since a slump at the start of the coronavirus pandemic as lockdown restrictions tightened across the UK.

Helen Dickinson, chief executive of the British Retail Consortium, said: ‘The retail recovery remains fragile as the industry enters the all-important Christmas period, with November and December typically accounting for over a fifth of annual sales.

‘While food and online retail continued to show strong growth, high street shopping has struggled in recent months, with footfall still down by over a third. Tighter Government restrictions have taken their toll on fashion and beauty sales, while home office and computing equipment has benefitted.

‘Retailers have spent hundreds of millions to make stores Covid-secure and keep staff and customers safe. Furthermore, they are encouraging the public to shop early for Christmas and prevent the last minute rush, so that everyone – from shoppers to warehouse workers – have the space they need to stay safe and well.

‘Retail has proven itself to be a responsible industry during this pandemic, and Government should not risk the retail recovery by closing stores during the all-important run up to Christmas.’ 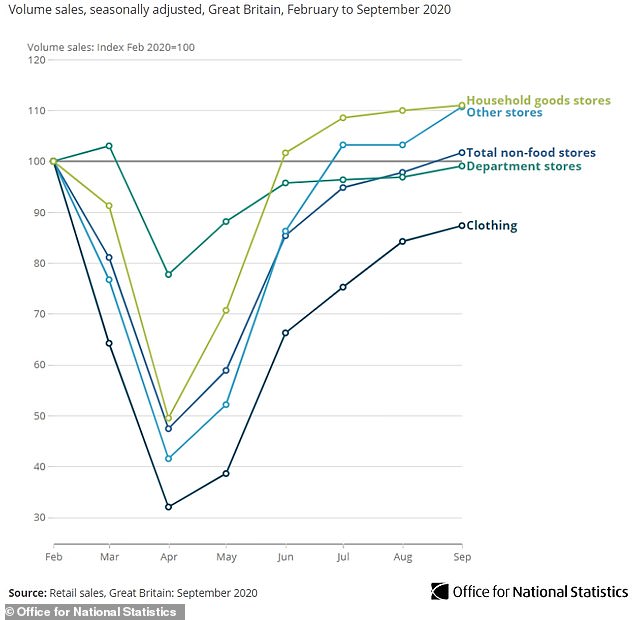 Richard Lim, chief executive of Retail Economics, said: ‘Growth in retail sales is beating even the most optimistic expectations.

‘Consumers have proved extremely resilient as cancelled holidays, fewer trips out and less commuting have boosted discretionary spending power to the benefit of some parts of the retail sector.

‘Christmas 2020 is going to be like no other and we’re also likely to be seeing signs of consumers starting their Christmas shopping earlier.