Police have urged pubs and restaurants to snoop on customers to ensure they stick to lockdown rules, the Mail can reveal today.

Scotland Yard has been writing to struggling traders in London to say they should ask for names, addresses and even photo ID.

However business chiefs said this placed ‘completely unacceptable’ demands on staff and would cost venues bookings if customers could not prove they were following the Covid-19 restrictions.

The Night Time Industries Association has taken legal advice over the ‘unlawful and misleading advice’.

Police forces around the country are checking on Facebook and other social media sites to see whether landlords are letting customers flout social distancing rules. The row came as Boris Johnson faced a revolt after ordering Greater Manchester into the toughest level of lockdown restrictions. 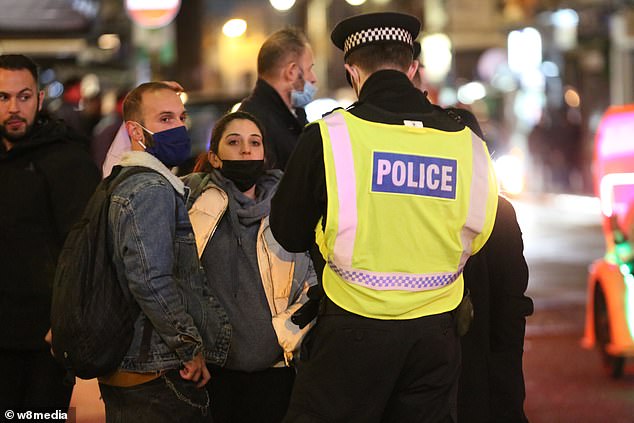 Scotland Yard has been writing to struggling traders in London to say they should ask for names, addresses and even photo ID (pictured, officers talking to revellers in Soho) 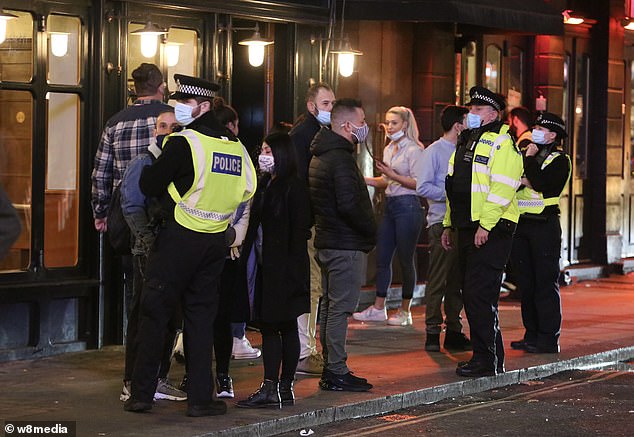 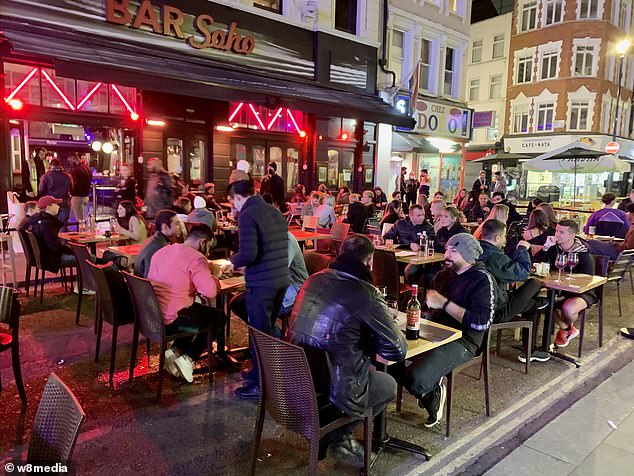 Police forces around the country are checking on Facebook and other social media sites to see whether landlords are letting customers flout social distancing rules (pictured, Soho)

After 11 days of talks the Prime Minister broke off financial negotiations with local leaders and confirmed the region will be classed as a ‘very high risk’ Covid area. The decision infuriated the city’s mayor Andy Burnham and politicians across the North.

As a furious blame game broke out over who was to blame for the collapse of talks on the Manchester bailout:

Venues in the hospitality, tourism and leisure industry are already required to record contact details of customers, visitors and staff for NHS Test and Trace.

The letter, from a Metropolitan Police borough licensing team, went out last Friday after Health Secretary Matt Hancock announced that London would be designated a ‘high risk’ region.

Professor Jonathan Van-Tam said the Government may have to ‘push on the pedal a little harder’ to bring the virus under control in some areas.

But he said he did not support a full national circuit-breaker for England as introduced for Northern Ireland.

Speaking to a Downing Street press conference Professor Van-Tam said that it was ‘appropriate to insist on those similar hard measures’ but only in areas where the virus is ‘out of control’.

Those in Tier Two areas can go to a pub or restaurant but can sit indoors only with members of their household. Up to six from different households can gather outside as long as they are seated.

Pub-goers caught breaking the rules face a £200 fine but pubs and restaurants risk a £1,000 penalty.

The Met letter said: ‘Premises should take steps to satisfy themselves that the group (maximum six people) is only from one household or part of a support bubble. This could include requesting photographic identification with names and addresses.’

Yesterday the National Police Chiefs Council suggested the Met was the first force to suggest diners be asked for such proof. The College of Policing also said there was nothing in coronavirus guidance to suggest pubs should request ID.

Mike Kill, chief executive of the Night Time Industries Association, said: ‘We have sought legal advice regarding the communication from the Metropolitan Police. We feel it’s potentially unlawful and misleading advice. Suddenly demanding photo ID and proof of address could decimate businesses.

‘If people turn up and their addresses or names don’t match because people aren’t married or older children have moved back home do they turn them away? We have also seen in some cities police looking at social media like Facebook to say customers are not social distancing.’

Emma McClarkin, of the British Beer & Pub Association, said: ‘Expecting pubs to demand all customers produce photographic identification with names and addresses would be fundamentally inappropriate and completely unacceptable.

‘Pubs continue to ensure that all safety guidelines within the three tiers are adhered to.’

Restaurants and pubs are already warning they will not survive the winter after the Tier Two rules triggered tens of thousands of cancellations. Central London was virtually empty last weekend following the new clampdown.

A Met spokesman said: ‘The local advice from one of the Met’s licensing teams about this is just that – advice.

‘It was well-intentioned and we hope that it is taken in that way. Our primary aim is to help keep all Londoners safe and ensure, through engagement and explanation, that the relevant Covid legislation is adhered to.’