Britain today recorded 4,044 more cases of coronavirus as official figures revealed the daily average number of infections has dropped for the first time in a fortnight.

Infections have risen consistently since July 4, when hundreds of thousands of Britons flocked to pubs, bars and restaurants to celebrate ‘Super Saturday’ after they were finally allowed to re-open following months of being shut to contain the life-threatening virus.

But they are still nowhere near levels seen during the darkest days of Britain’s Covid-19 crisis in March and April, when top scientists estimate more than 100,000 cases were truly occurring each day.

Health chiefs today also recorded 13 more coronavirus deaths, taking the total number of laboratory-confirmed victims who have died within 28 days of being diagnosed past 42,000. Only the US, Brazil, India and Mexico, all countries with substantially larger populations, have suffered more fatalities.

Yesterday 17 deaths were declared, down from 34 on Saturday, although fatalities are normally lower on Sundays and Mondays due to a lag in how they are recorded. The rolling average number of deaths stands at 30, up from 22 last Monday and 12 the week before that.

Until recently, hospitalisations and deaths had remained low and stable despite soaring infections. But both have since started to spike. Some 314 newly-infected patients needed NHS treatment in England on September 23 — the highest figure since June. And daily fatalities reached a 10-week high last Thursday — when 40 deaths were recorded for the first time since July 14. 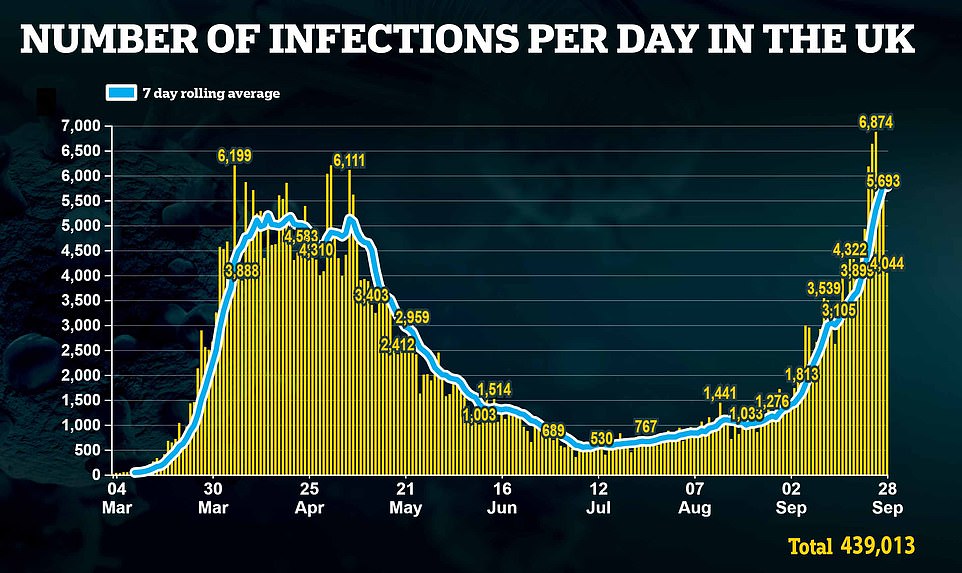 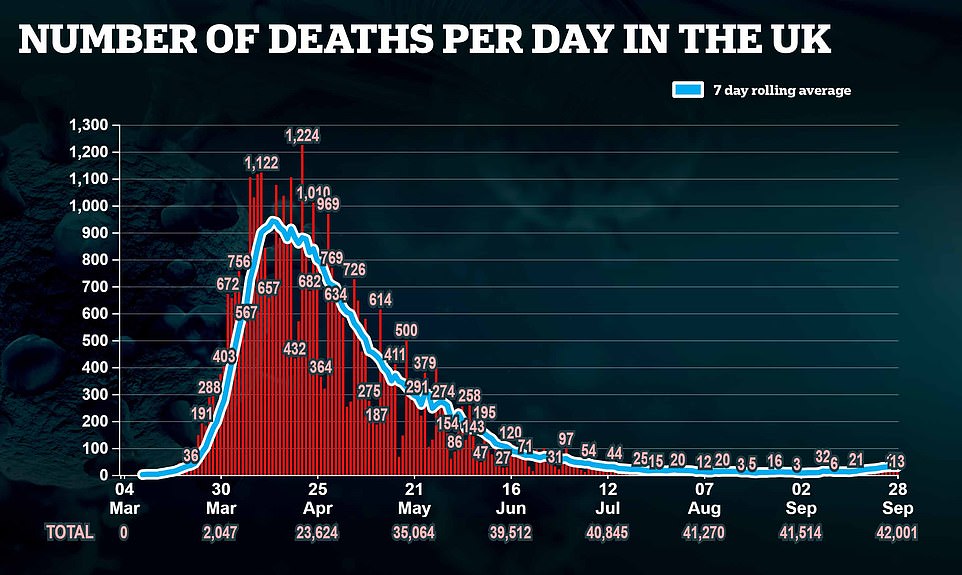 The seven-day rolling average for the number of daily infections now stands at 5,770, down from 5,816 yesterday — a figure that had risen every day since falling slightly to 2,998 on September 14. For comparison, the rolling-seven day average number of new cases stood at 3,929 last Monday after 4,368 infections were recorded.

In other twists in the coronavirus crisis today:

It comes after official data revealed restaurants and pubs were to blame for fewer than three per cent of all recorded outbreaks of respiratory illnesses in the week Boris Johnson announced the 10pm curfew on the hospitality sector.

Just 22 outbreaks of acute respiratory infections were reported in food outlets in England between September 14 and 20. Seventeen of these were confirmed to be down to Covid-19, while the others could have been flu or other viral illnesses.

The Public Health England data provides a snapshot of where viruses are spreading across the country.

In a weekly update on outbreaks in different settings, PHE reports situations where two or more people have been diagnosed with the same chest infection and the cases reported to local councils’ public health teams. Outbreaks can vary considerably in size and data is not published about how many people are involved in each. 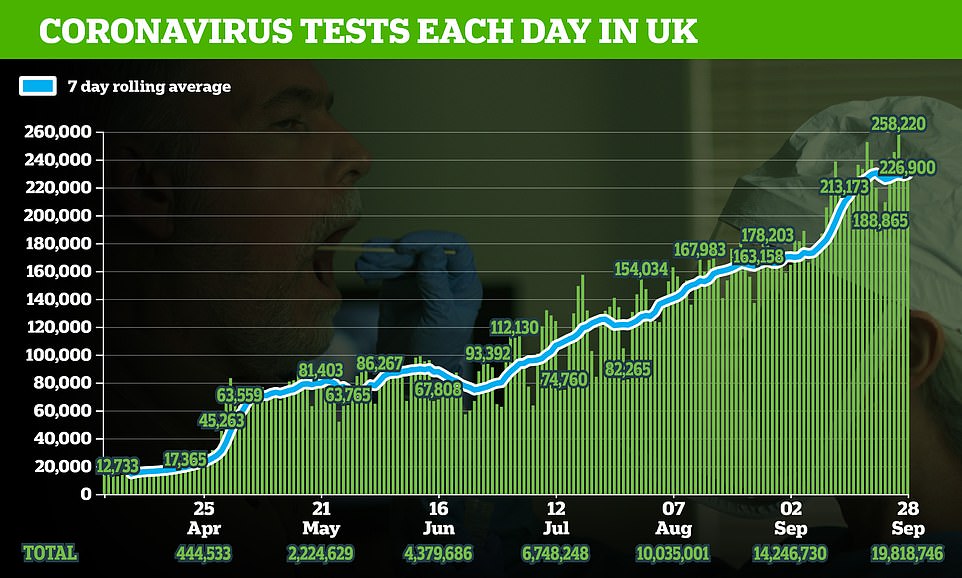 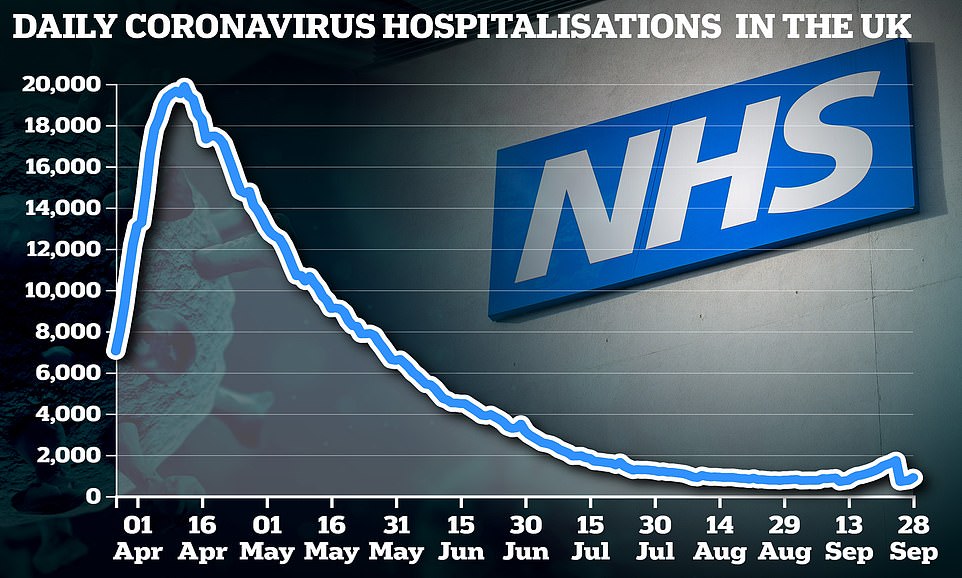 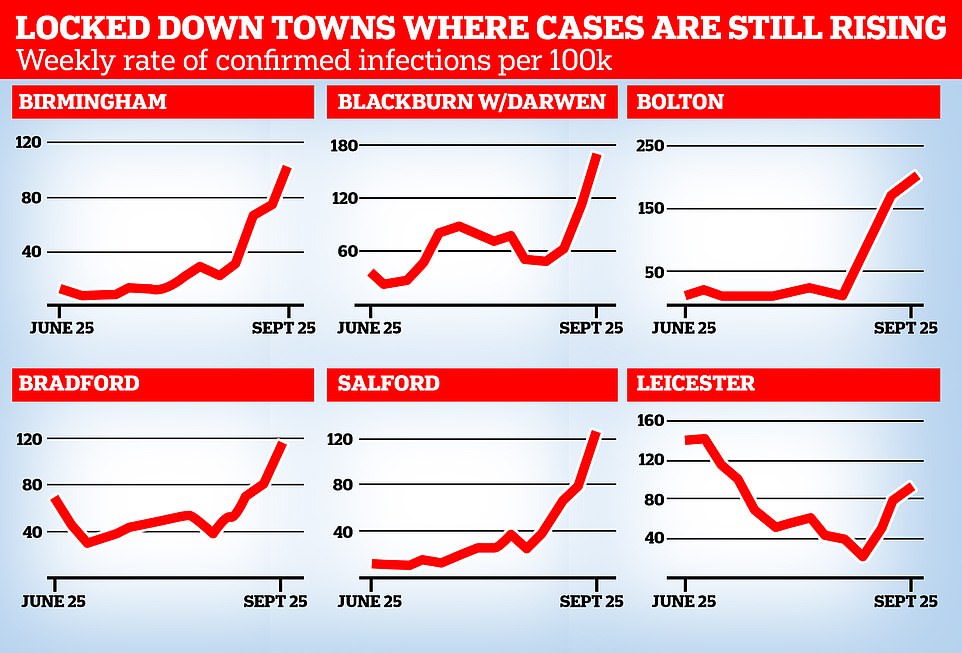 Bolton is still Britain’s Covid-19 hotspot after suffering more than 200 cases per 100,000 in the last week. Other areas of Britain hit by local lockdowns have also seen infections continue to rise, despite having had tougher measures imposed 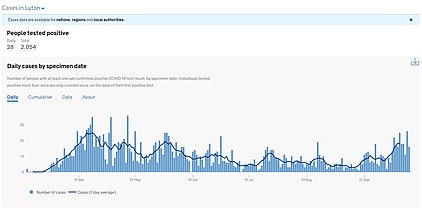 The data is worrying because it implies the nationwide measures announced last week – including the ‘rule of six’ and 10pm curfew – do little to stop coronavirus’s spread, at the expense of restricting people’s freedoms and harming the economy.

The figures come amid mounting concerns that closing pubs and restaurants at 10pm may lead to a spike in infections. Over the weekend drunk travellers were pictured crowding onto public transport at chucking-out time – they would likely have been spread out over longer time periods before the curfew.

Not all the outbreaks will be Covid-19 – they are chest infections more generally – but some are.

Exclusive: Former voice of the Reds' Thom Brennaman: 'I know I hurt a lot of people'

Exclusive: Former voice of the Reds' Thom Brennaman: 'I know I hurt a lot of people'