Up to 50,000 cancer cases have gone undiagnosed during the pandemic, a leading charity warned yesterday.

Macmillan Cancer Support added that the country was ‘at a crossroads’ and said shutting down cancer care this winter could cost thousands of lives.

Experts predict the number of patients with undiagnosed cases of the disease could double by this time next year – unless cancer services are protected.

They estimate it will take the NHS at least 20 months to tackle the backlog caused by coronavirus so far.

A further 33,000 cancer sufferers are facing delays in starting treatment because of the pandemic, the report said.

NHS England said the grim forecast does not factor in the work of health staff in recent weeks to bring ‘cancer treatments back to pre-pandemic levels’.

But yesterday, hospital bosses in Nottingham announced a number of cancer operations had to be postponed this week because of surging virus cases.

It is one of a number of trusts scaling back routine operations to cope with the explosion in demand. 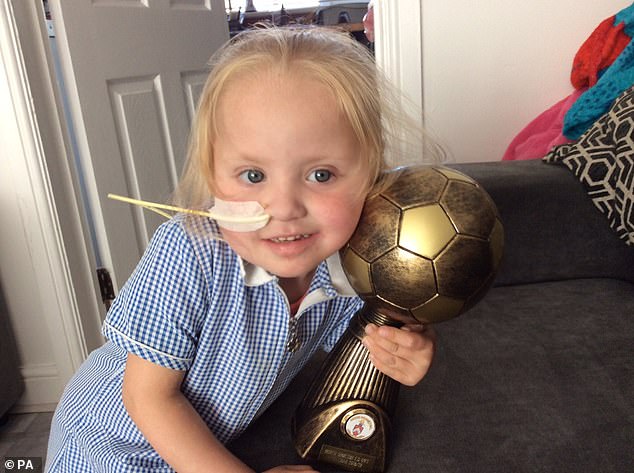 Scarlett Coleman, 5, was diagnosed with lymphoma this year after a heart transplant in 2015 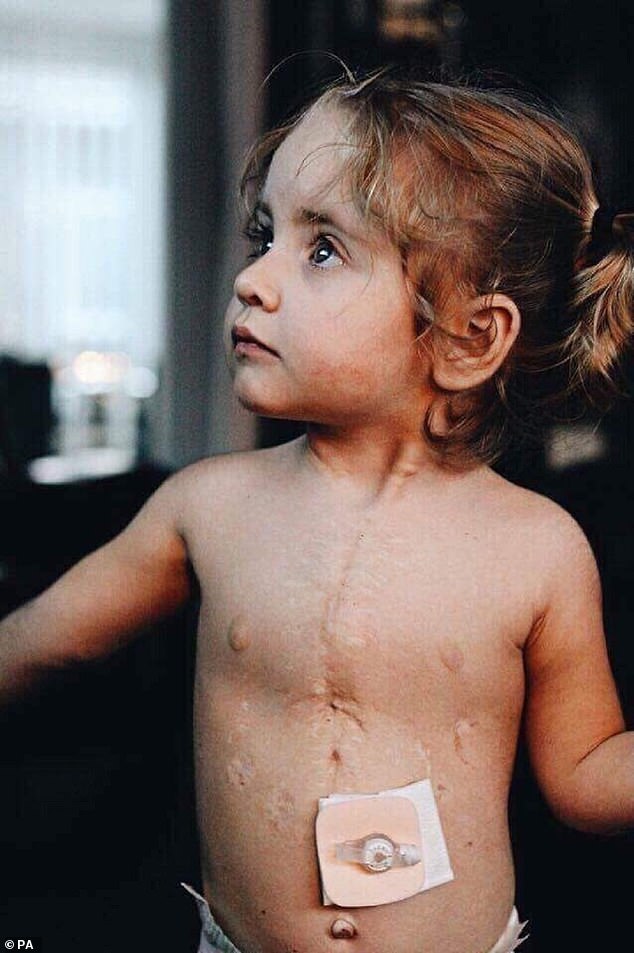 The new report – The Forgotten C? The Impact of Covid-19 on Cancer Care – details the devastating impact of the backlog on diagnosis and treatment.

It said lockdown led to a drastic fall in referrals as thousands avoided going to their GP with possible cancer symptoms.

Disruption to vital appointments, operations and treatments all contributed to the ‘worrying’ backlog.

Macmillan Cancer Support has called for Health Secretary Matt Hancock to ensure vital cancer services will not be downgraded because of winter pressures and amid rising virus cases.

Lynda Thomas, chief executive at the charity, said: ‘Cancer care is at a crossroads and services cannot be shut down this winter.

‘Because of the pandemic, we estimate that an additional 50,000 people are missing a cancer diagnosis and others are having their appointments disrupted once again.

‘It is simply unacceptable if they face unbearable and unprecedented delays which could affect their chances of survival.’

She added: ‘Cancer doesn’t stop for Covid-19 and neither can our health services.’

The warning comes as hospitals in parts of the country, including Liverpool and Nottingham, are now treating more Covid patients than at the peak of the first wave in April.

A number of trusts have scaled back routine operations to cope with the surge in demand.

NHS England said cancer treatment remained a priority across hospitals, with latest figures for October showing nearly all patients referred for urgent treatment had started within the two-week target.

But there are fears it is only a matter of time before stretched hospitals start to buckle under the rising demand from Covid patients.

Keith Girling, its medical director, said: ‘We’ve had to make the extremely difficult decision to postpone operations for four of our cancer/pre-cancer patients this week due to pressure on our intensive care units from both Covid-19 and non-Covid related emergencies.

‘This delay, however short, will be incredibly hard for the patients and their families, and I’m truly sorry for any distress this will have caused.’

Meanwhile the opening of a flagship cancer unit at University College London Hospitals Trust has been delayed until next summer ‘due to the complexity of the project and the impact of the pandemic’.

Macmillan found 650,000 cancer patients in the UK – more than a fifth of the total – have experienced disruption to their treatment or care because of Covid-19.

Of these, 57 per cent were worried that it could affect their chances of survival.

An NHS England spokesman said services were ‘back to pre-pandemic levels’ and that the findings failed to factor in the improvements to cancer services during the summer.

If you have worrying symptoms, you must get this checked – the NHS is ready and able to treat you.’

A girl of five has been ‘passed from pillar to post’ while waiting for a cancer operation because of Covid delays.

Scarlett Coleman developed post-transplant lymphoma disorder after being given a new heart when she was a baby due to a congenital defect.

She began suffering stomach pain over the past year. Her parents, Ian Johnson and Melanie Coleman, were told she had cancer in mid-March.

They say they are still waiting for an operation at the Royal Victoria Infirmary in Newcastle after crucial appointments were delayed. 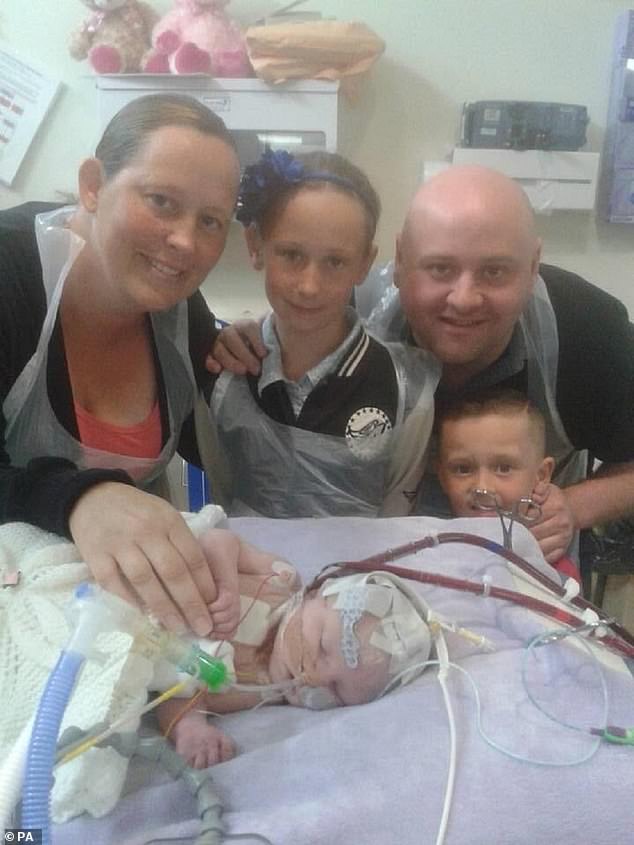 Scarlett Coleman on a hospital bed in 2015 with her father Ian Johnson, mother Melanie, sister Leah, and brother Lucas

Mr Johnson, 38, from Middlesbrough, said he had considered taking Scarlett to A&E and refusing to leave.

‘It is all because the NHS is getting overwhelmed by coronavirus. I got angry with them,’ he said.

‘It is not just my family that is suffering though, getting passed from pillar to post.

[Scarlett] had numerous appointments with the gastroenterology team and we were supposed to go for an appointment in mid-September.

‘It was cancelled and now she needs an operation.

‘We were told to “wait a while” because of Covid. The [hospital] said to give them six weeks to find out if the operation would go ahead.

‘We have not even got to the point of arranging it. We should get a phone call in mid-November.’

Miss Coleman, 37, added: ‘Scarlett was supposed to have a CT scan every 12 weeks since her diagnosis and she has been to just one appointment.’

Mr Johnson said the public should help stop the NHS getting overwhelmed by sticking to social distancing rules.

He added: ‘Scarlett is suffering because of other people’s stupidity around Covid.

‘I am angry with the NHS – it is wrong of them to treat her in this way.’

The Newcastle Upon Tyne Hospitals NHS Foundation Trust was contacted for comment.

Sorry, no beds left for chemo

Ella Wolff believes the pandemic has wasted precious time she has left to live.

In January, the 25-year-old recruitment consultant – pictured left – was told the rare eye cancer she had beaten in 2018 had returned to her liver and, without treatment, she could have as little as six months left.

Despite being in a race for survival, she was denied the chance to start a specialist targeted chemotherapy trial in May because all the intensive care beds had been earmarked for Covid patients. 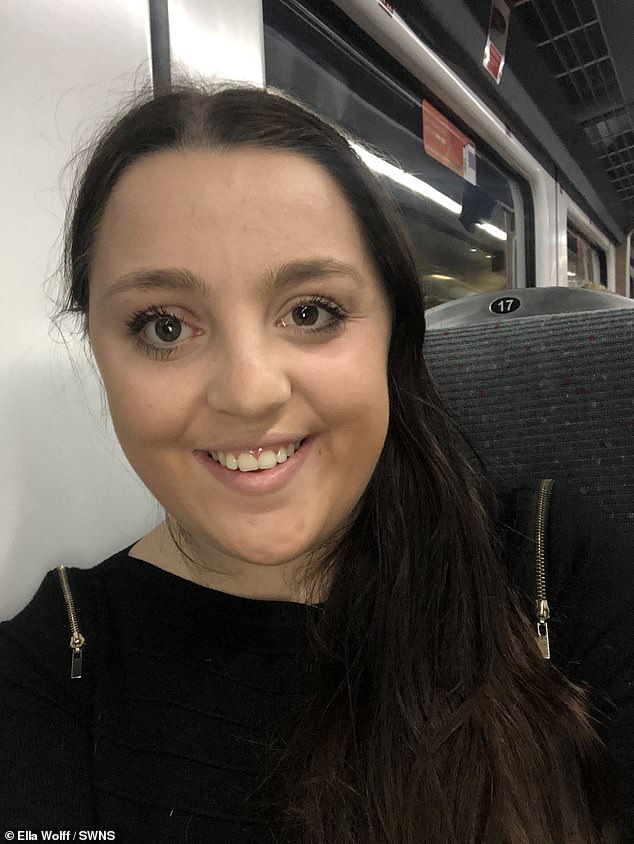 Ella Wolff, 25, had her eye removed to stop the spread of the cancer but was told it spread to her liver

Instead, doctors decided to try another immunotherapy treatment, which they admitted was less likely to work.

Now she is having to crowdfund to pay for the £40,000-a-time chemotherapy treatment, known as Delcath, herself – because the immunotherapy failed and the trial is no longer available on the NHS.

Miss Wolff, from Ispwich, said: ‘I feel like I have wasted four months on a treatment nobody had much hope for. It was wasted time, all because there wasn’t an intensive care bed.

‘It’s so wrong. Cancer patients have been so neglected, it’s very scary times.’

Brother who can’t donate his kidney

A student waiting for a kidney transplant from her brother told yesterday how it had been cancelled for a second time because of the virus.

Mali Elwy, 19, had her left kidney removed after being diagnosed with cancer aged three.

She went on to develop chronic renal failure in her right, leaving her facing the prospect of regular dialysis sessions.

Her brother Morgan, 24, agreed to donate one of his kidneys.

But surgery at a hospital in Covid hotspot Liverpool was delayed back in August, and last week the rearranged operation was postponed again. 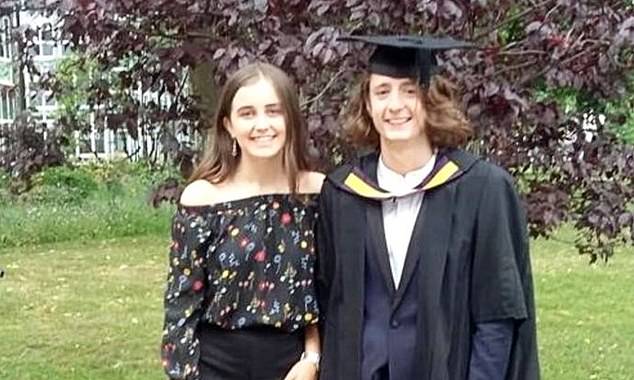 Mali Elwy, 19, was due to receive a kidney from her brother Morgan, 24 last week

The teenager, pictured left with her brother, is taking a year out from her studies at Bangor University to give herself time to recover and now fears she will not be able to return next September.

‘They thought it would be too much of a risk for us to go in [to hospital],’ Miss Elwy said.

‘It was cancelled three days before because of the situation with the coronavirus. We were both absolutely gutted.’

Dr Tristan Cope, medical director of Liverpool University Hospitals, said: ‘Undergoing a transplant during a period of pandemic can present more risks than benefits, which is why clinicians, patients and their relatives have to take difficult decisions.’

Hundreds of stroke patients who died during lockdown may have delayed seeking help because of the virus, a report has revealed.

Almost one in three of those who suffered a stroke between mid-March and May failed to get emergency support, experts said.

The fear of going to hospital pushed up the number dying of strokes in their own homes by 52 per cent. Stroke deaths in care homes were also 39 per cent higher than usual, suggesting fewer were taken to hospital for potentially life-saving treatment.

A Stroke Association survey found a third of over-65s were still putting off calling 999 for non-Covid emergencies.

The charity warned similar delays this winter could cost thousands of lives as well as hinder survivors’ recovery.

Stroke Association chief executive Juliet Bouverie said: ‘Strokes haven’t stopped happening, which means that people are in danger of dying at home, and not getting the treatment they need to prevent long-term disability.’

Between March 13 and the start of May, the number who died from a stroke in their own home rose from a five-year average of around 400 to 610.

Deaths in care homes rose from a five-year average of around 800 to more than 1,100.

Between the start of lockdown and the end of June, there were 19,106 admissions to hospital stroke units, 13 per cent lower than in the same period last year.

Dr David Hargroves, a consultant stroke physician at East Kent Hospitals, said: ‘The best thing you can do if you see someone showing the signs of a stroke is to call 999.’