Dame Louise Casey has warned the offer of two-thirds pay for workers whose firms shut could see people ‘prostitute themselves so they could put food on the table’.

In a blistering attack, the Government’s former homelessness adviser has said new measures from Ministers to support employees not at work would not ‘cut it’.

Under the furlough scheme, taxpayers funded 80 per cent of workers’ wages until August, with the scheme winding down until it is closed at the end of the month.

A separate Job Support Scheme, which launches on November 1 and lasts for six months, will involve the Government paying two thirds of each employee’s salary.

But this will only be up to a maximum of £2,100 a month and only if their employer is legally required to close their premises because of restrictions.

Dame Louise told BBC News:  We are looking at a period of destitution. I can’t impress upon you enough that I think we are heading into an unprecedented period.

‘We’re already in it and it’s going to get worse. And it needs a more cross-government cross-society response.”

“Do we want to go back to the days where people can’t put shoes on the children’s feet? Are we actually asking people in places like Liverpool to go out and prostitute themselves, so that they could put food on the table?’

She also told how it was wrong for Downing Street and Westminster to have a sense that ‘people will make do’ because they ‘weren’t coping before Covid’. 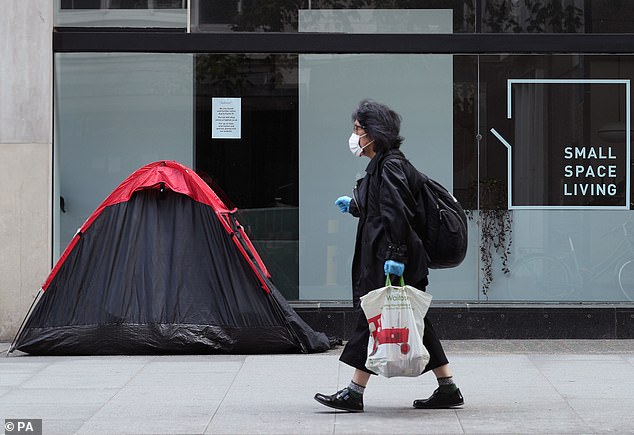 It comes one day after a report claimed women are being released from prison with just £46, a bin bag for their belongings and nowhere to live.

Research by a group of organisations known as the Safe Homes for Women Leaving Prison initiative yesterday called on the Government to take urgent action to address the housing needs of those leaving life behind bars.

The Prison Reform Trust, the London Prisons Mission and the Church of St Martins in the Fields, who worked on the project with women’s jail HMP Bronzefield in Middlesex, also want to see targets set for ensuring offenders have accommodation after leaving jail within a certain timeframe as well as it being made compulsory to refer prisoners who have been released to councils if they do not have a place to live.

The report claims finding housing and a job is ‘vital to achieving successful rehabilitation’, adding: ‘Without settled accommodation, securing employment, maintaining positive mental health and preventing a return to harmful behaviour such as substance abuse are practically unachievable.’

Hundreds more under-65s than normal have died of heart problems since the Covid crisis, study shows