Police are expecting the number of fines handed out for breaching coronavirus lockdown restrictions to increase – despite half of all penalties issued so far having gone unpaid.

National Police Chiefs’ Council (NPCC) chairman Martin Hewitt said that as new regulations are brought in, forces in England and Wales are expecting the number of fines issued to increase.

He made the prediction despite figures showing that, of 18,646 enforcement letters sent out in England and Wales, only 9,428 resulting fines had been paid, while 9,413 had not.

These include some people who are formally contesting their fine, while others who have not paid fall to be considered for prosecution.

Other data published by the NPCC on Wednesday also showed that hundreds of travellers suspected of breaking quarantine rules had not been traced. 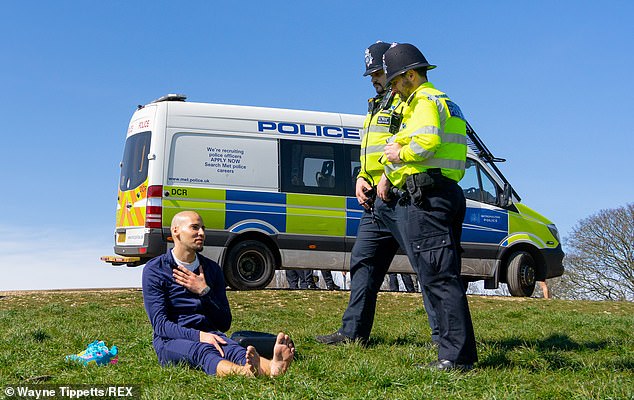 Police enforcing coronavirus lockdown rules this weekend in London. There is no suggestion the man pictured was fined

Mr Hewitt said: ‘We anticipate there will be an increase obviously as regulations are introduced in different parts of the country.

‘The FPNs (fixed penalty notices) were designed in the way that a number of other FPNs are and every individual has the right to decide not to pay that fine and elect to go to court and plead their case.’

Up to September 22, 4,114 cases were referred to police by health authorities, including 240 where people were found not to live at the address they had given, and 440 cases where there was no answer when officers attended an address.

Police issued 38 fines to those failing to self-isolate after returning from a country on the Government Quarantine List.

The NPCC said that just 15 fines were handed out in England in the first week of the ‘rule of six’ lockdown regulations, although this number could increase when figures are updated.

In the seven days from September 14, four fines were issued by Greater Manchester Police; seven by Lancashire Police; two by Leicestershire Police; and two by West Yorkshire Police.

In total, 18,912 lockdown fines were issued in England and Wales between March 27 and September 21.

In the final four weeks of that period, 147 fines were issued in England and four in Wales.

Eighteen fixed penalty notices for breaking rules around large gatherings including illegal raves and parties, that carry a £10,000 penalty, have been issued in England and two in Wales. 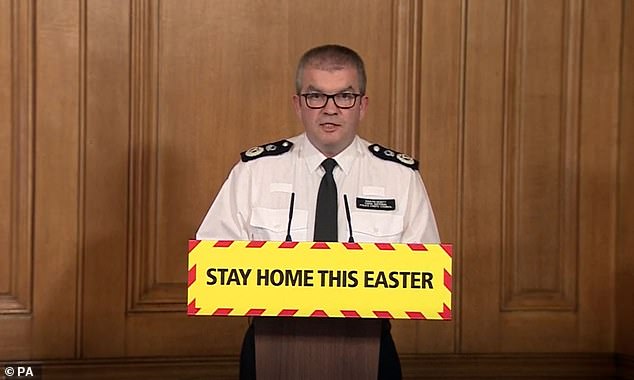 Police have given 61 fines for failing to wear a face covering on public transport, up from 38 up to the middle of August, while 28 were handed out for not doing so in shops.

Mr Hewitt said: ‘It is crucial that people do everything they can, including limiting social contact, to reduce the spread of coronavirus. The country is at a critical point, and personal choices will matter in the weeks and months to come.

‘Thank you to the vast majority of the public for sticking to the rules and following the guidance in place to limit the spread of the virus.

‘A small minority, however, are not following the rules, and are making decisions which put lives at risk – they should expect to have enforcement action taken against them.’

It comes as a runner said he had been fined £120 by a ‘Covid Officer’ for sweating during his jog.

Mark Meghezzi, 30, said he had been targeted by one of the London Borough of Hounslow workers on Tuesday.

The university management graduate, originally from Aberdeen, said he had been resting in Chiswick after a vigorous dash when he was spotted.

Mr Meghezzi had been sweating heavily and blew from his mouth to get the perspiration off his face.

But he said an officer said he thought he had been spitting and issued him with a fine.

Council leaders said the person who fined him had been an Enforcement Officer who had acted under anti-littering regulations.

The alleged wrongdoing – which is denied by Mr Meghezzi – falls under Environmental Protection Act regulations, something now considered more important during Coronavirus times.

Mr Meghezzi wrote online: ‘Is this really what it has come to?

‘Sadiq Khan I can’t imagine this is how you intended these resources to be deployed. 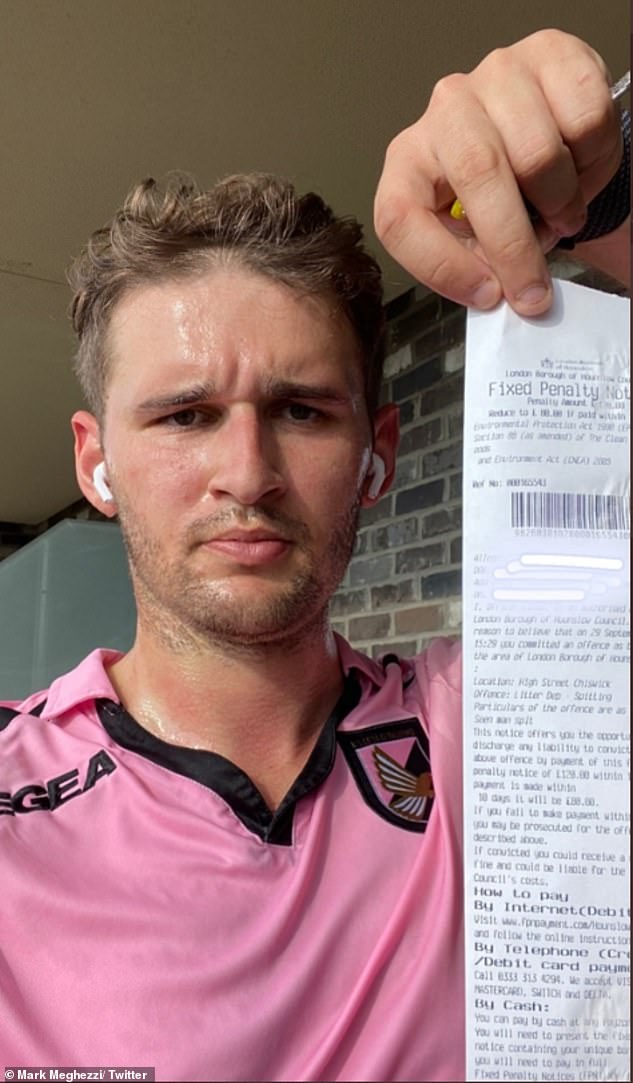 ‘I received a fine from Sadiq Khan’s London Borough of Hounslow for doing nothing more than going for a run down Chiswick High Road.

‘I paused at Turnham Green Terrace and went down on my haunches (it was a tough one) and waited for the traffic lights to turn green.

‘As I did so, naturally the sweat poured off me and I blew some away from my lip, towards the road. This is natural and unavoidable when running.

‘I was then accosted by a very excited young ‘Covid Officer’ who advised me that I had been ‘observed spitting’ and who then very eagerly issued me with the £120 FPN in the picture.

‘I stood back (mostly in shock) after receiving the FPN from this ‘officer’.

‘I observed him repeat his truck twice more with passing joggers and cyclists, stopped at the lights.

‘Needless to say this FPN will not be being paid and a complaint has been raised against the individual for their conduct in issuing it.’

‘The Fixed Penalty Notice was not given for any Covid offence or sweating, and nor was it issued by a Covid marshal. The notice was issued by an Enforcement Officer for spitting, which is a littering offence.

‘Officers tackle a wide range of offences to tackle environmental and anti-social behaviour to support the local community. All of our officers are provided with body-worn cameras that capture interactions between staff and members of the public. Details of why a Fixed Penalty Notice was issued is provided on the notice along with details of a representative process that allows for notices to be reviewed.’

Spreading coronavirus via spit is thought to be possible because it could contain matter from the nose or lungs.

Running websites advise joggers try to be careful not to do it when they are out exercising.