Britain’s second wave of coronavirus lurched from being a handful of small outbreaks to penetrating the entire UK and forcing whole cities back into lockdown within just two months, according to a series of heatmaps that reveal just how quickly the outbreak has evolved.

Covid infections hovered at 10 cases per 100,000 people across most of the country at the end of August before they surged after millions of Brits headed to beaches and rental homes to make the most of the summer following months of being cooped up at home.

Infections smashed through the 200 cases per 100,000 barrier for the first time in Bolton — which was one of the UK’s Covid-19 hotspots — at the start of September. The virus then spread rapidly across the North of England, with the Government’s heatmaps illustrating the stark north-south divide.

In response to the soaring cases, ministers rushed out national measures such as the rule of six, on September 14, and 10pm curfew, on September 26, as well as enhanced local lockdown restrictions in an effort to put the lid on spiralling cases —but with limited success.

Only four local authorities in England were registering more than 400 cases per 100,000 on September 30 but by October 14 this had more than quadrupled to 16. The disease then started to pick up in London and the South West – which had previously escaped any major resurgence.

Boris Johnson then imposed England’s three-tier lockdown system on October 14, to tighten up measures even further. Scotland announced its own five-tier system nine days later. Wales and Northern Ireland have both opted for ‘firebreak’ lockdowns to head off the rise in infections, and Scotland has imposed time-limited restrictions across its central areas.

The UK Government has been hanging back from imposing a second full nationwide lockdown as yet, despite calls from parts of the scientific community for this to be brought in over half term.

Infections are already falling in hotspots Newcastle, Nottingham, Liverpool and Manchester, according to data from Public Health England. But, as the total numbers are still very high, the reversal is yet to show up on the Department of Health’s heatmaps. 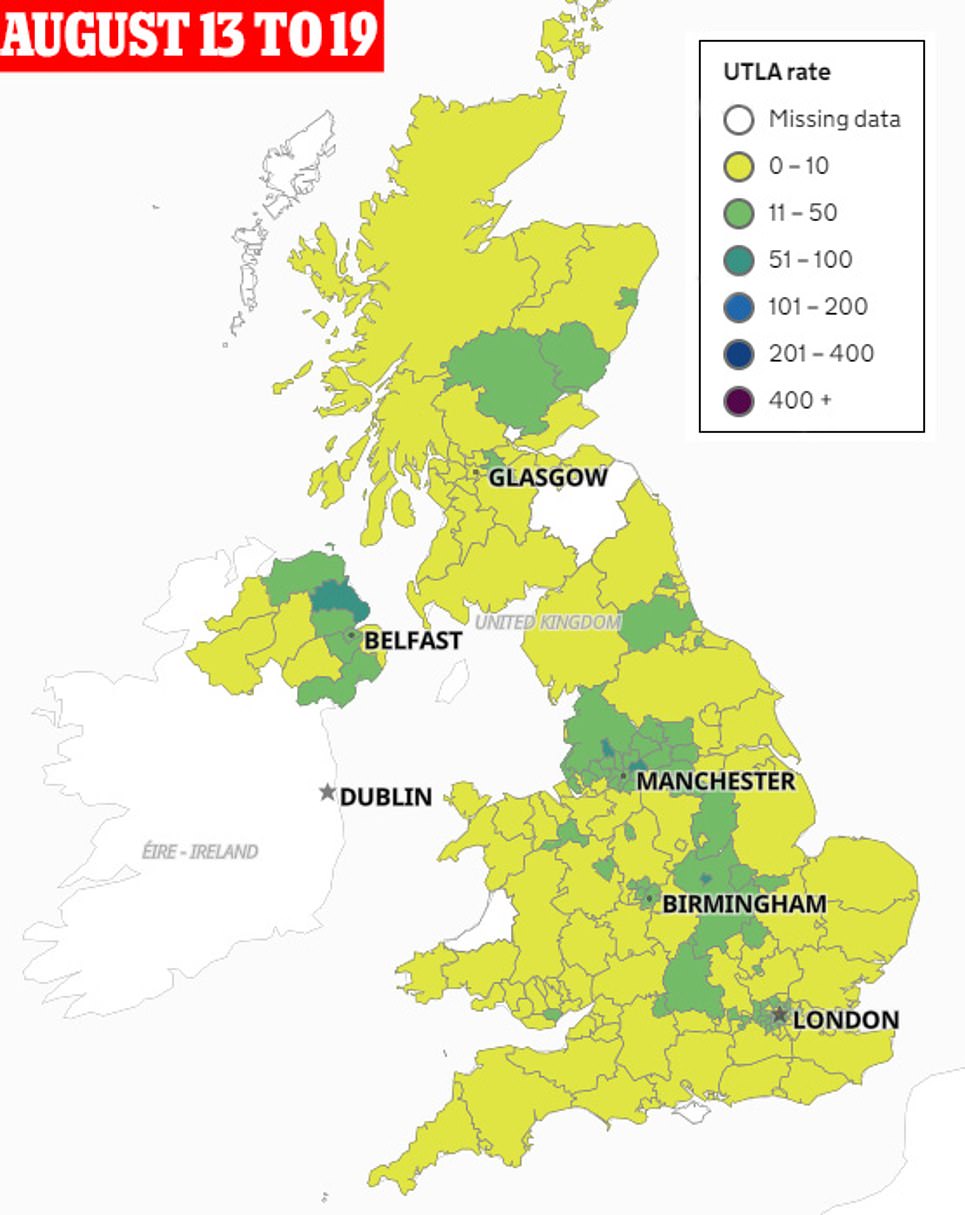 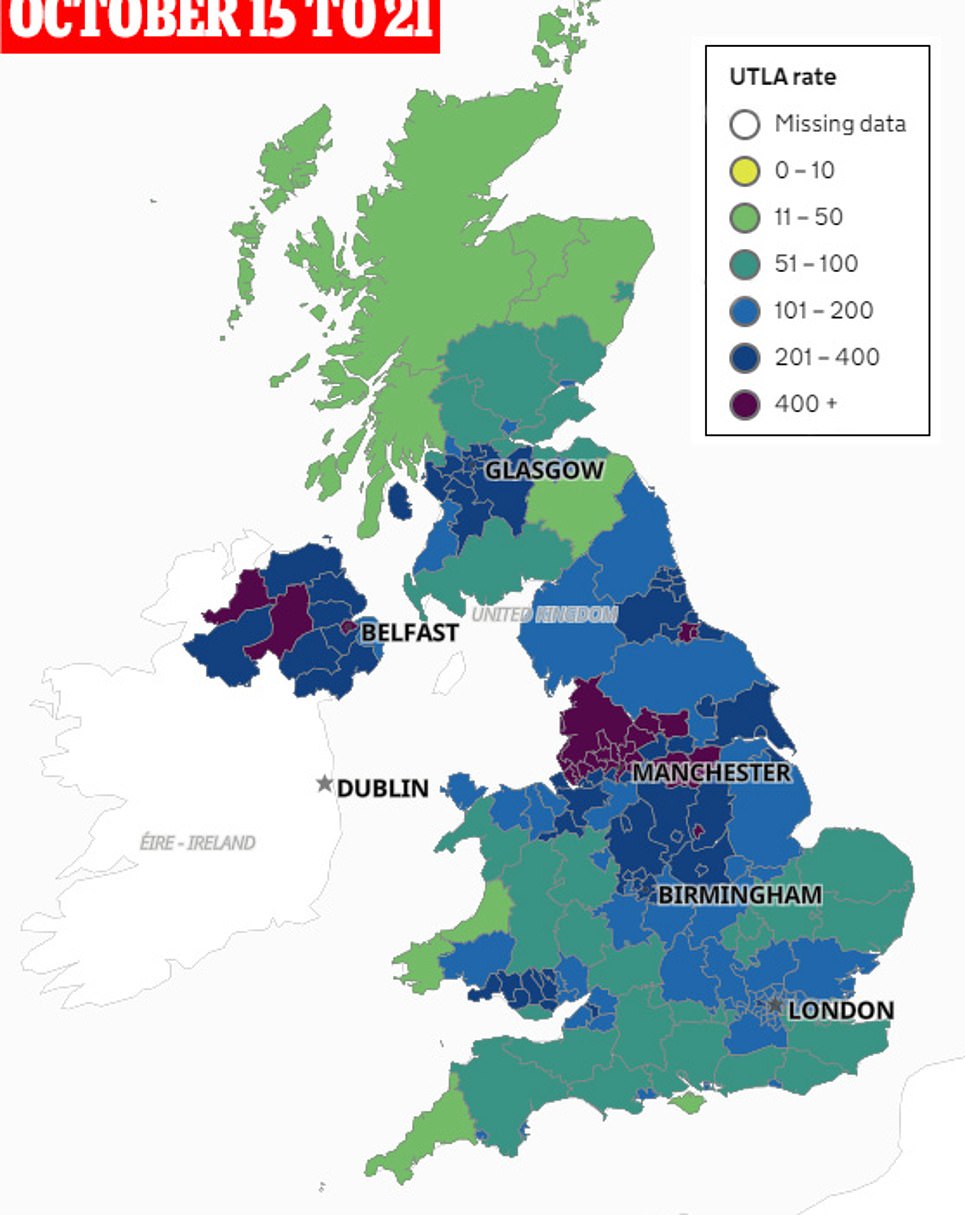 This map shows how the UK’s coronavirus infections surged in two months from mid-August, with most areas recording less than 10 cases per 100,000 people, to today where the virus has surged across the North of England, Northern Ireland – as well as causing further infections in Glasgow, parts of Wales and London 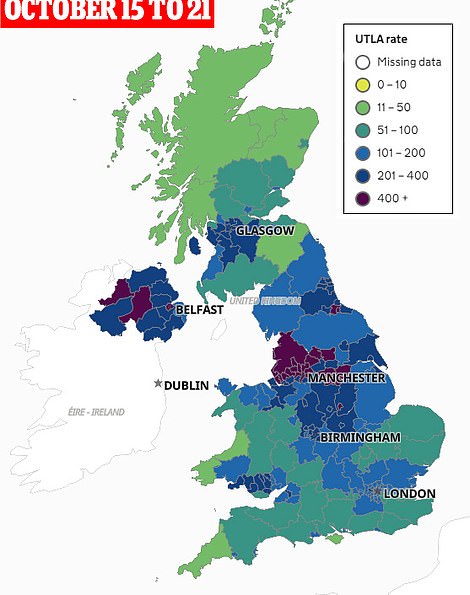 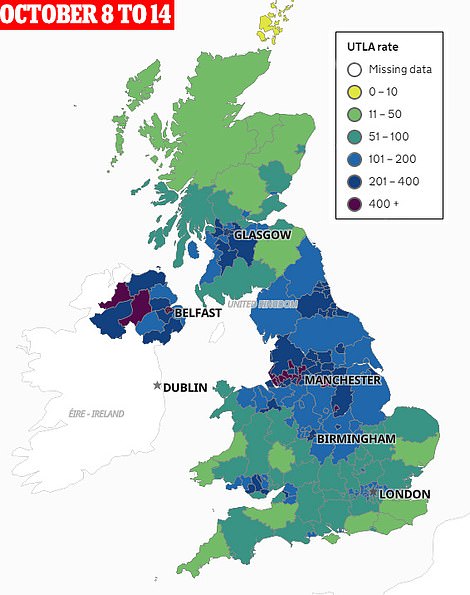 The map on the left is the current situation based on the most recently available data, for the week ending October 21. The two reflect the situation in the UK before (right) and after (left) the Tier system was introduced 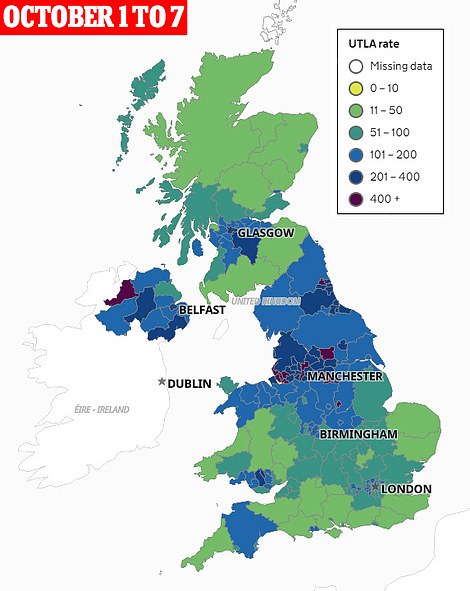 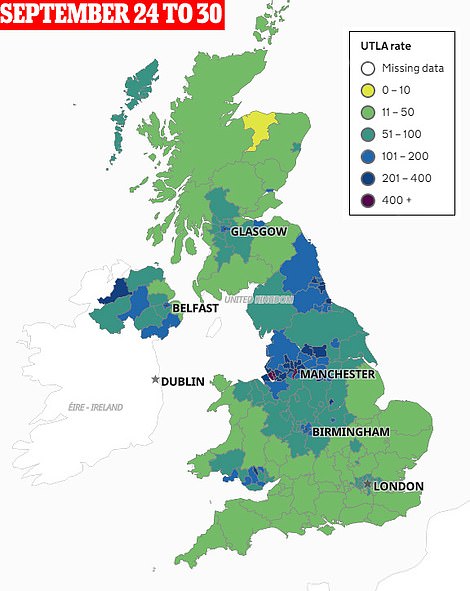 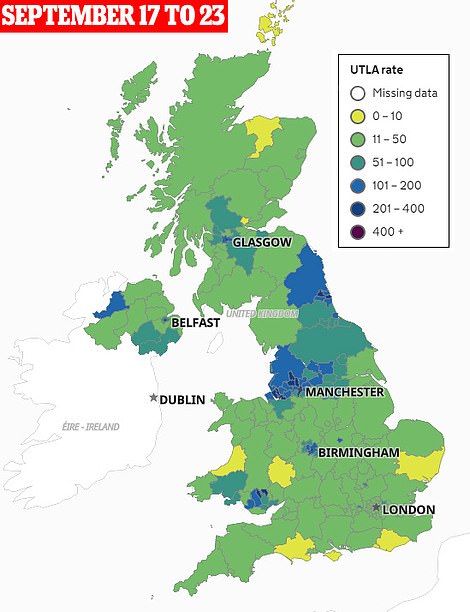 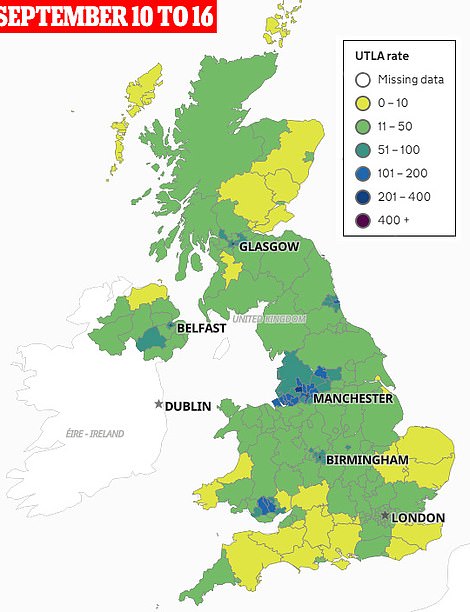 Which areas have the largest Covid-19 outbreaks?

The maps, produced using infection case rates from Public Health England, in particular highlight the uneven spread of the second wave — with infections surging across the North of England while remaining far lower in the south.

By September 16, as many as 20 areas in the north of England were recording more than 100 new cases each week per 100,000 people, while none were in the south.

But by the start of October only six local authorities in the North — Carlisle, Copeland, Allerdale, Eden, Richmondshire and Scarborough — were recording fewer than 100 cases per 100,000.

For comparison, only ten London boroughs and six local authorities were recording more than 100 weekly cases per 100,000 people in the south at the same time.

They also reveal how while most of the UK was yellow – meaning less than 10 cases per 100,000 – in mid-August, the virus quickly spread.

In September pockets of blue – indicating more than 100 cases per 100,000 – started to emerge in major population centres Manchester, Cardiff and Newcastle.

These quickly advanced across surrounding areas, while cases in the centres continued to surge up to purple, or more than 400 cases per 100,000.

And by the start of October blue hotspots also began to appear in London, Glasgow and Northern Ireland.

And although the number of infections has risen in London, it remains below average due to the much larger outbreaks in the North.

Where were the biggest increases in infections?

This box uses data up to October 18 as that’s the last date for which data is available.

Despite the mounting case rates, however, analysis of Public Health England data by MailOnline published last week reveals the percentage increases in infections across the country are slowing – in a sure sign the second wave may be approaching its peak.

Almost half of all local authorities in England – 69 out of 149 councils – recorded dips in their coronavirus infection rates in the week ending September 25.

It also showed only three regions recorded spikes of more than 50 per cent – 12 times fewer than the week before, when 36 registered the marked increases.

Data last week showed as many as 41 councils saw drops in their infection rates, but this number has been updated by PHE to show only four actually saw a decrease.

Nonetheless, the lower numbers overall represent a possible turning of the tide with infections – as Tier 3 restrictions including the closure of gyms, pubs and bars finally appear to be keeping the virus at bay.

The rise in infections despite restrictions will be seen as a vindication of calls for harsher lockdown restrictions to be brought in by some – with Labour demanding a ‘firebreak’ in England over the half term.

But ministers are likely to argue that their measures are working, and say that coronavirus infections would have surged far faster in many more areas without the measures being imposed.

Health Secretary Matt Hancock argued two weeks ago that the Three-Tier strategy had been ‘guided by the science’ and would ‘protect lives and livelihoods’ while heading off a surge in infections.

Liverpool, Greater Manchester, Lancashire, Warrington, Nottingham and South Yorkshire are all in Tier 3.

London, the North East, Essex and areas of the North West and Nottinghamshire are in Tier 2.

It is thought West Yorkshire may be the next region to be moved to Tier 3 restrictions. 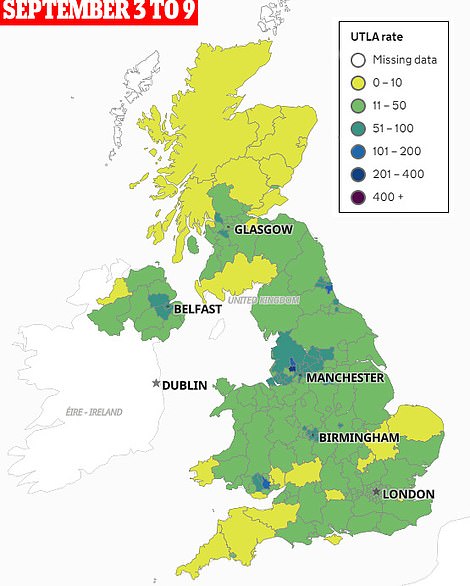 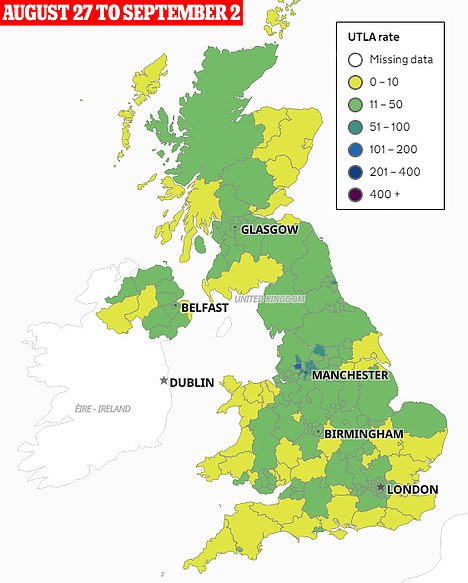 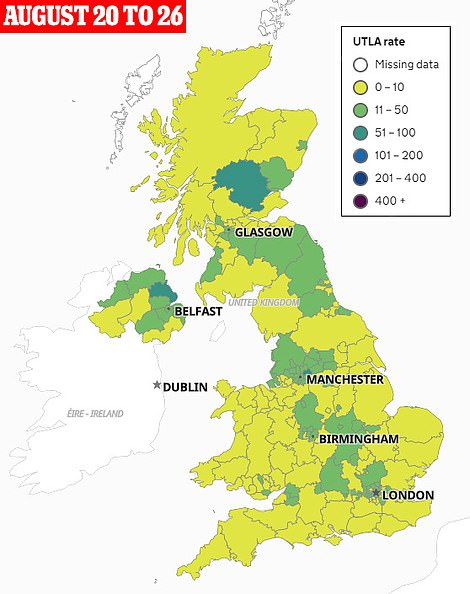 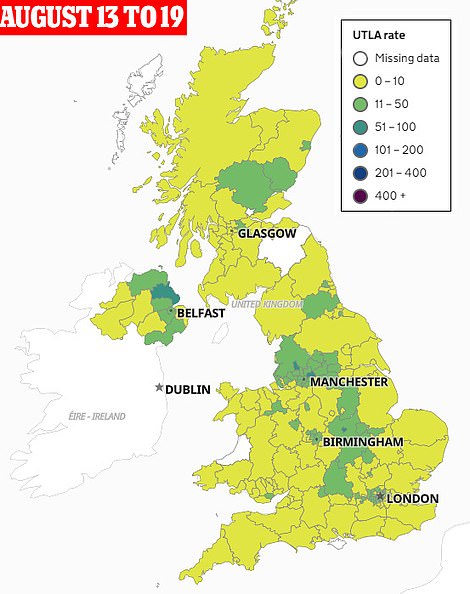 Over the summer, and following a lengthy national lockdown, many areas of the UK had less than 10 cases per 100,000 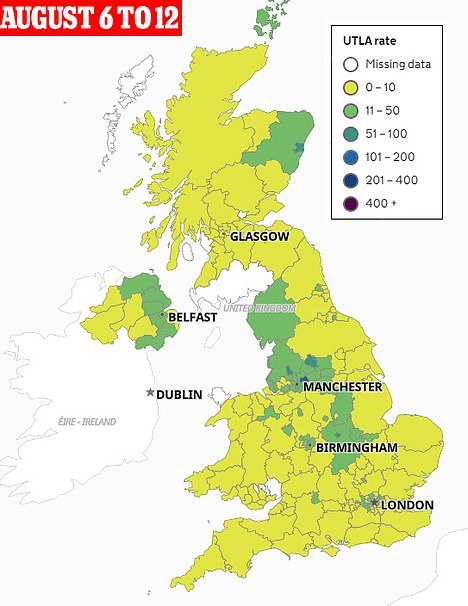 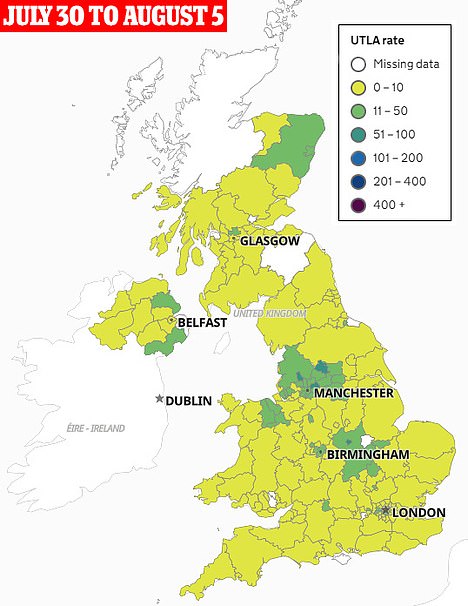 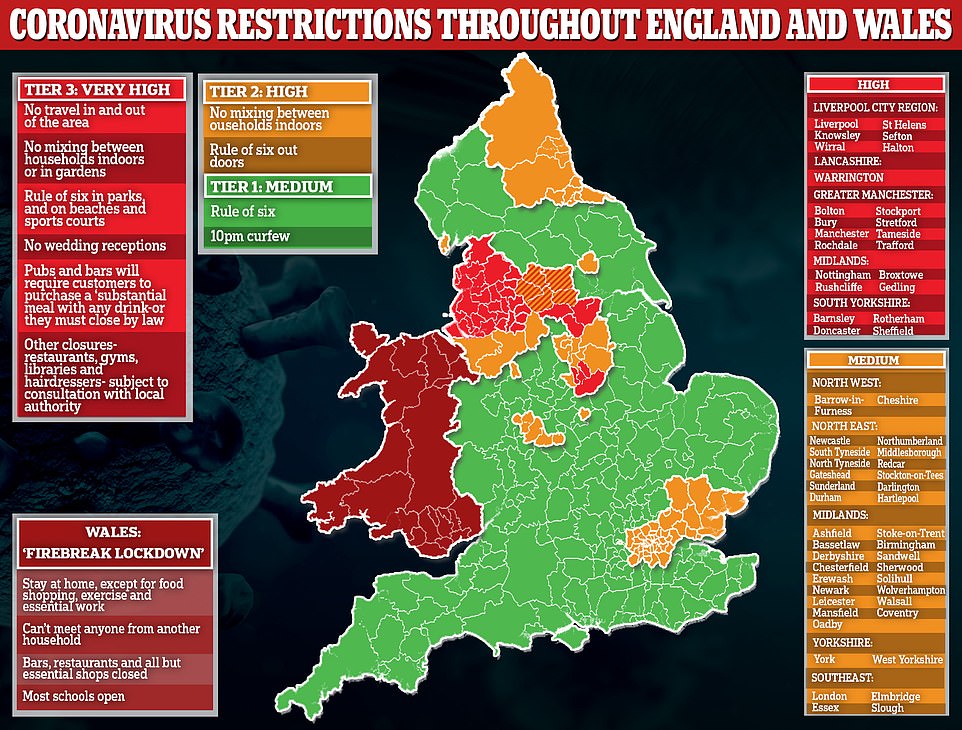 West Yorkshire may be next to move into Tier Three affecting 1.8million people. If it were to be plunged into Tier Three, it would follow neighbours South Yorkshire, Lancashire and Greater Manchester 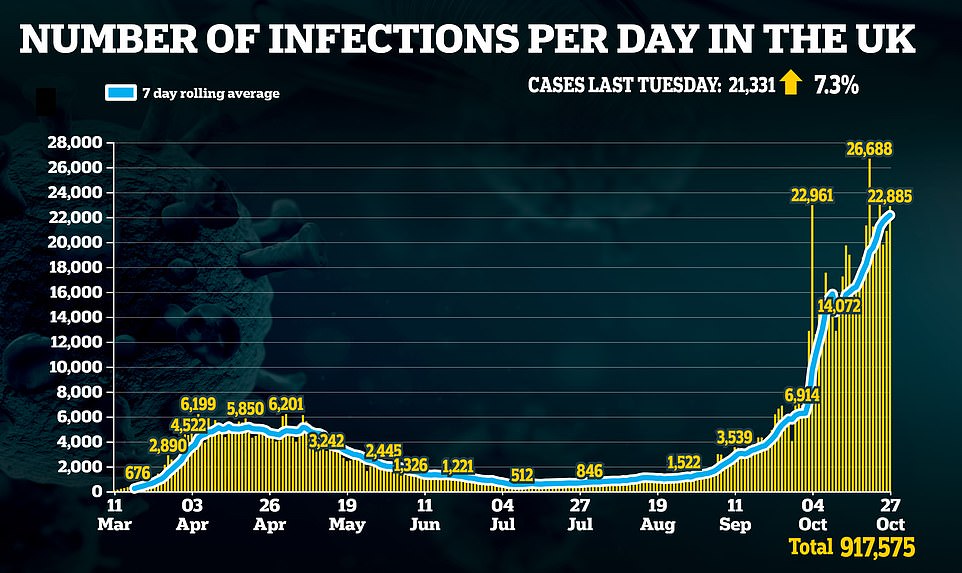 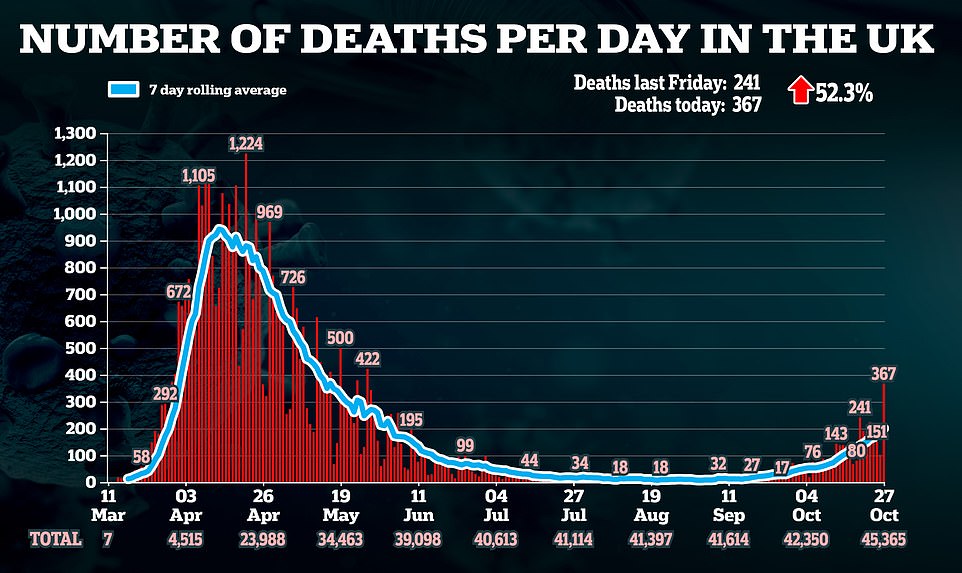 Everything you need to know about Walmart+