Lung cancer referrals plummeted by up to 75 per cent during the ‘catastrophic’ first lockdown, a report has revealed.

Experts said one in three people with lung cancer has died since the beginning of the pandemic amid waits for life-saving treatment.

They warned that some of the deaths may have been mislabelled as Covid-19 because a cough is a key symptom of both diseases.

The study also estimated that the delays to diagnosis, treatment and tests during lockdown could lead to 1,372 avoidable deaths in the next five years.

The report by the UK Lung Cancer Coalition warned that ‘the catastrophe that is the Covid-19 pandemic’ is likely to reverse improvements in survival rates made over the past 20 years.

Lung cancer is the UK’s most deadly cancer, killing 35,300 each year – more than breast and bowel cancer combined. 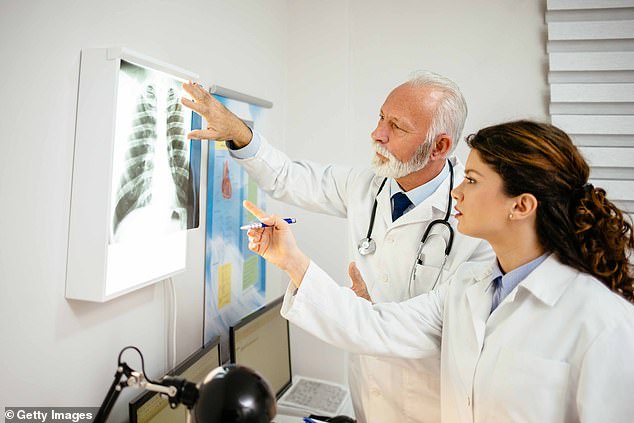 Referrals for the disease have been the hardest hit out of all cancers, partly because people with a cough have been told to stay at home.

Experts said this means those with lung cancer are not going to their GP and are therefore being diagnosed at a later stage, significantly damaging their survival chances. The report added: ‘GPs are likely to misdiagnose early lung cancer symptoms as Covid-19 because of the large number of Covid-19 cases.’

It said that in some areas referrals by GPs to lung cancer specialists fell by 75 per cent during the peak of the outbreak in spring.

Professor Sir Mike Richards, former national cancer director, said: ‘There is a specific problem for lung cancer, which is the overlap of symptoms with Covid-19.

‘Some patients may develop cough symptoms and be told to stay at home until their symptoms get worse. This has resulted in an increase in late stage presentations.’

Professor David Baldwin, respiratory medicine consultant at the University of Nottingham, said: ‘At least a third of patients with lung cancer have already died since the beginning of the pandemic. Some deaths will not have been recognised as lung cancer and may have even been labelled as Covid-19.’

The report said that patients have faced potentially deadly delays for diagnosis and surgery since March.

Prompt referrals from a GP to hospital for a scan are crucial for lung cancer survival chances. 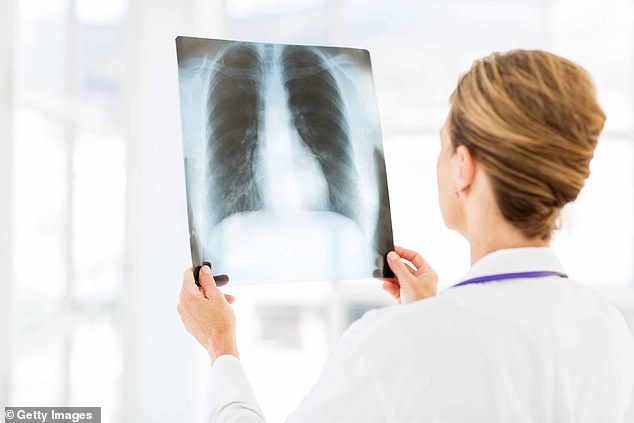 The study also estimated that the delays to diagnosis, treatment and tests during lockdown could lead to 1,372 avoidable deaths in the next five years (file photo)

But many services were halted for three months or more during lockdown. Meanwhile thousands of cancer patients had chemotherapy or surgery postponed.

The report also found that more than half of lung cancer specialist nurses or their team members were redeployed or unable to work as a result of Covid-19.

It said: ‘Delays of only a few months can have significant implications for the chances of a patient to receive a potentially curative treatment.

‘With studies showing a 16 per cent increase in mortality if the time from diagnosis to surgery is more than 40 days, a delay of three months or more can mean the progression from a potentially curative tumour towards one that is only suitable for palliative care.’

It added: ‘It is estimated that the impact of the Covid-19 pandemic could lead to an additional 1,372 deaths due to lung cancer, reversing the progress achieved in lung cancer over recent years.’

The Department of Health urged people to come forward if they have lung cancer symptoms.

Found, key to spotting your risk of needing treatment for Covid-19

A simple clinical tool that accurately predicts a person’s risk of needing hospital care or dying from Covid-19 has been created by Oxford experts.

It found the 5 per cent of the population most at risk account for three quarters of Covid deaths. This suggests that protecting them – by regularly testing people they meet regularly, for example – would slash the death rate while letting the rest of society return to normal.

The QCovid algorithm was developed using data from more than eight million patients at GP practices during the first wave, including age, ethnicity, obesity and existing illnesses.

Meanwhile, a study from the University of Edinburgh in the journal PLOS Medicine showed care home residents had a Covid risk 21 times higher than the general population.

Men’s was 63 per cent higher and heart disease patients had twice the risk.

It also challenged the idea that ‘all are at risk’ regardless of age, showing 84 per cent of severe or fatal cases in under-40s had been in hospital in the previous five years or given medication within 240 days.

Electric in Game 1 win, Mookie Betts looks like Dodgers' missing piece: 'So lucky to have him'

Electric in Game 1 win, Mookie Betts looks like Dodgers' missing piece: 'So lucky to have him'