Revellers in Manchester are hitting the streets for the last night on the town while pubs and bars slash beer prices and give away packets of crisps for free before Tier 3 lockdown strikes.

Groups of young people were seen piling into bars and pubs across the North West city ahead of the most severe Covid-19 restrictions coming into force at midnight tonight.

The measures will force licensed premises to shutter unless they serve ‘substantial meals’ in a blow to the local economy which has been described by industry chiefs as a ‘death knell’.

Around 2.8 million people in Greater Manchester will join some 3.1 million in Lancashire and the Liverpool City Region already under Tier 3. In these areas, social mixing is banned both indoors and in private gardens, while the Rule of Six applies in some outdoor settings such as parks, public gardens and sports courts.

Local leaders help the Government to determine whether other venues like gyms or casinos should be closed. In Greater Manchester, the new measures could lead to the closure of more than 1,800 pubs and 140 wine bars, as well as 277 betting shops and 12 casinos, according to the real estate adviser Altus Group.

It is estimated that up to 2,000 local businesses will be impacted by the new rules, which are being imposed on Greater Manchester after more than a week of haggling between Andy Burnham and Boris Johnson. 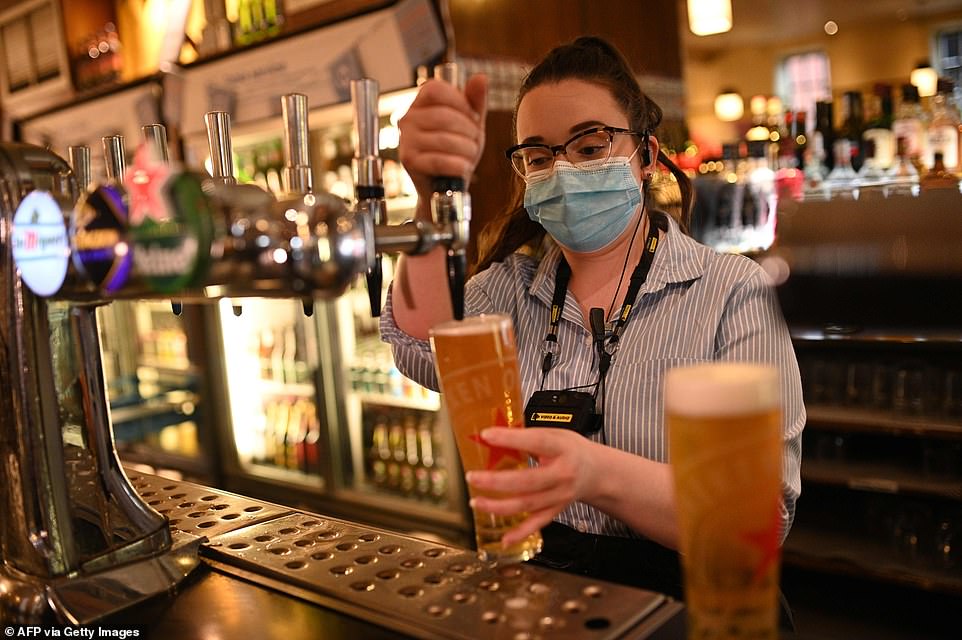 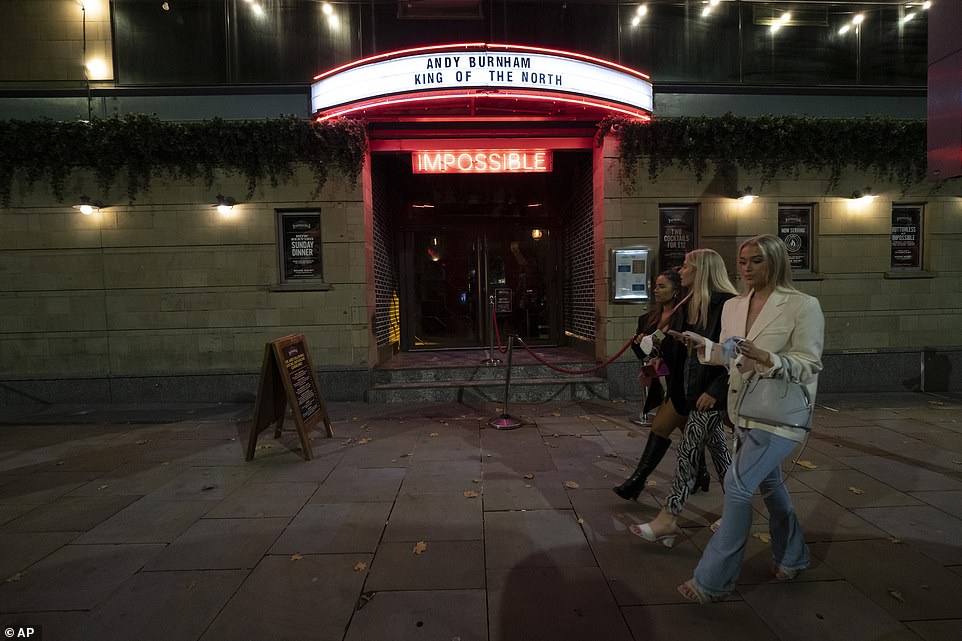 Members of the public walk through Manchester past a bar displaying the mock film title ‘Andy Burnham, King of the North’ 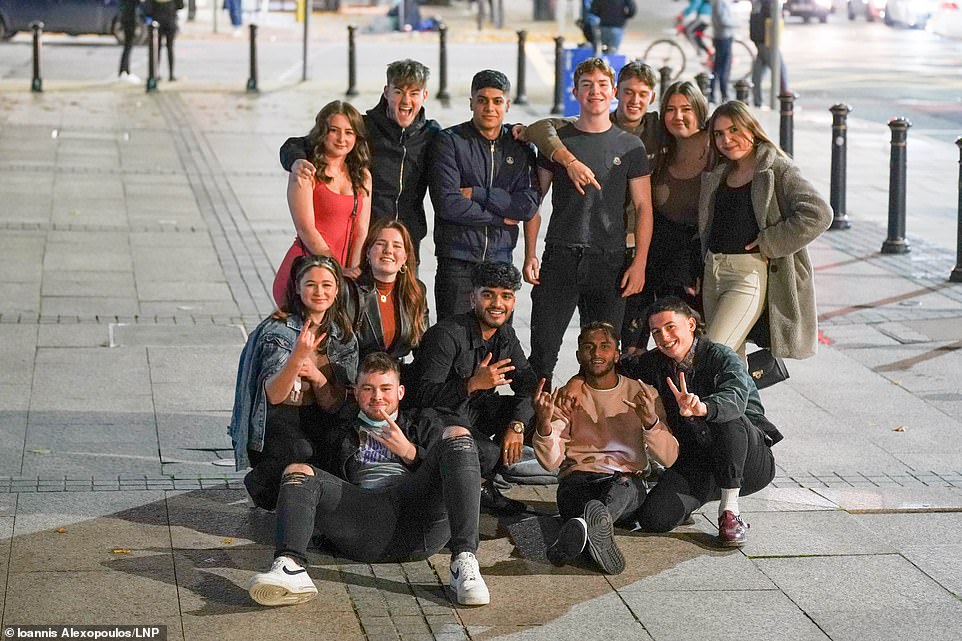 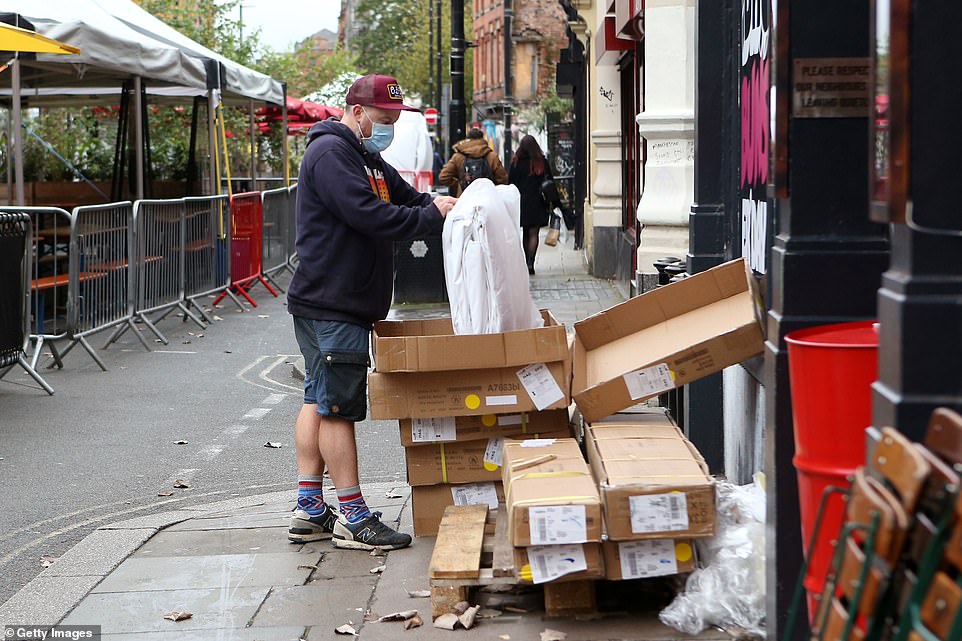 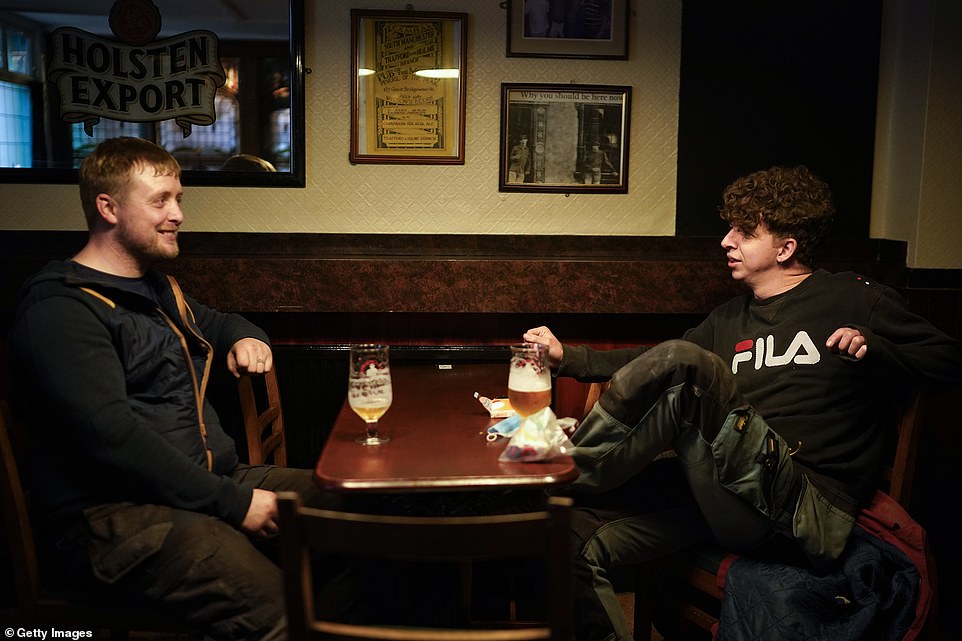 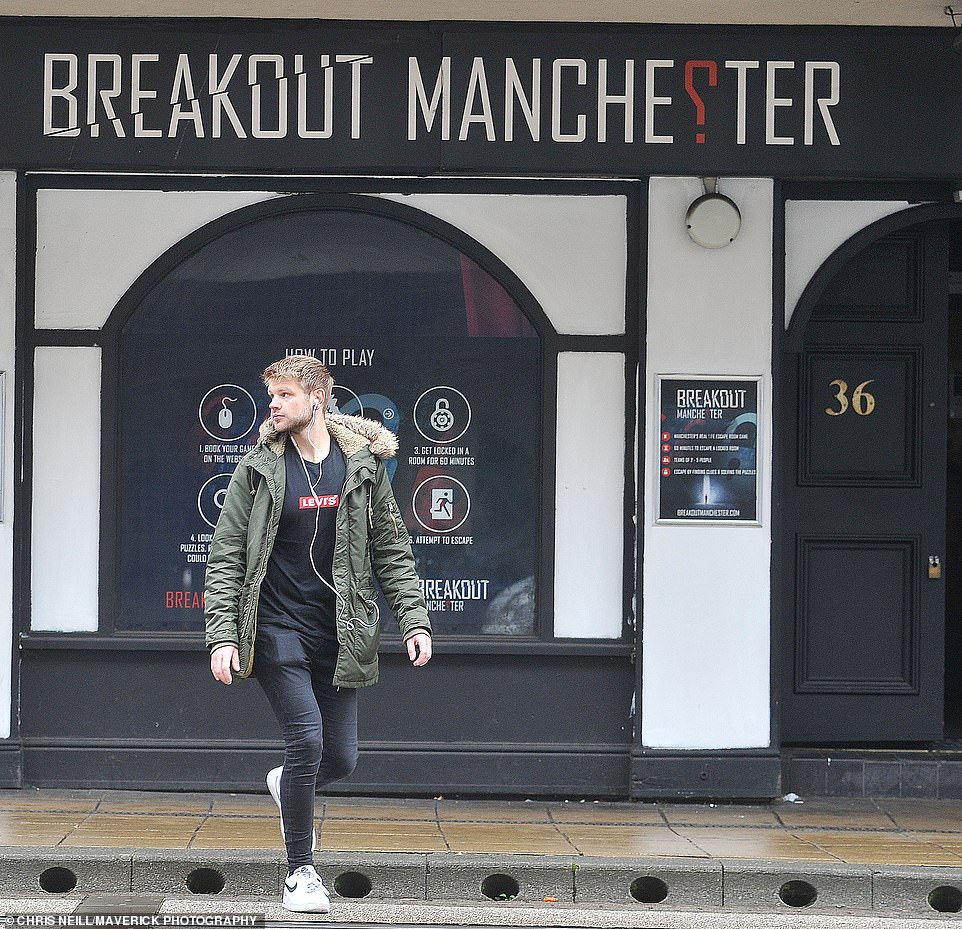 Greater Manchester will go into Tier Three lockdown from midnight, meaning a number of new restrictions will come into force 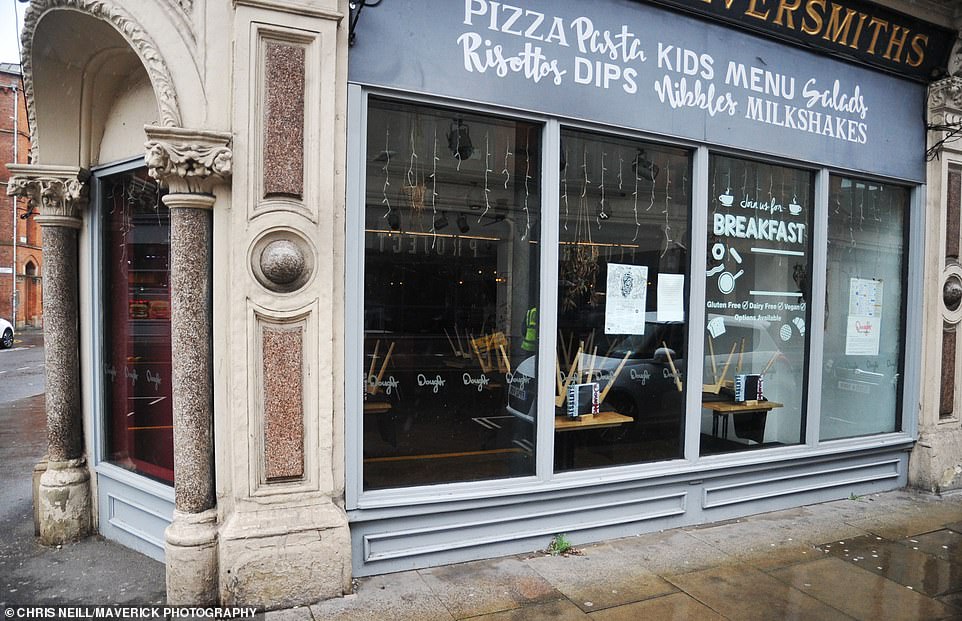 The city of Manchester is facing a winter of hardship, with thousands of businesses set to be affected by the new lockdown 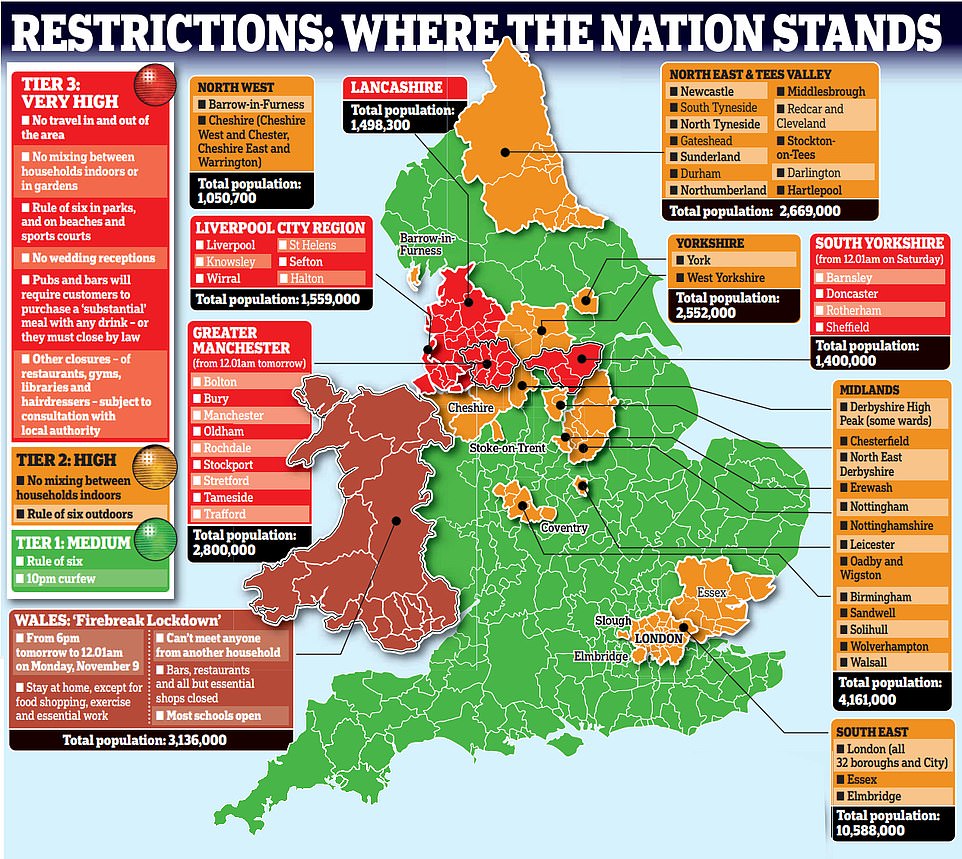 What is the row over Tier Three bailouts?

The Government has been engaged in brutal haggling with local leaders across swathes of England about the financial package linked to entering Tier Three restrictions.

The funding is on top of the Government’s wider job support scheme for workers put on hold due to lockdown, and business grants.

What did Liverpool City Region get?

The Government has said ‘baseline’ funding for the top tier includes £8 per head of population to bolster local contact tracing and enforcement.

Liverpool received £14million on this strand of funding. And there was another £30million allocated to support businesses affected by the squeeze, around £20 per capita.

Lancashire was the second area placed into Tier Three lockdown.

It will receive £12million for contact tracing and enforcement, as well as £30m in business support – broadly in line with the Liverpool settlement.

The contact tracing and enforcement settlement came to £22million due to the higher population in the region.

The Government initially offered around £55million in business support, roughly proportional to the other packages.

The final offer was £60million, £22 per head. But Andy Burnham originally asked for £90million and only came down to £65million before quitting the talks. Mr Johnson has said the £60million will still be allocated.

There is also a £30million package of business support – £22 per head and roughly in line with the allocation for the other regions.

Many bars in the area, including the legendary Swan Street pub Bar Fringe, are now desperately trying to sell their beer before it has to either be poured down the drain or left to go bad.

The venue opened from 2pm today selling its cask ales for just £2 a pint, including Hobgoblin IPA and Mad Dog Brewing Co’s Mad World bitter APA. It will also be selling bottles to take away as it shifts stock.

Across the road, The Smithfield Tavern is in a similar predicament.

The tap house for local brewery Blackjack is going to be closing for the foreseeable future tonight and will be selling all its cask beers on a ‘pay as you feel’ basis until last orders.

Adapting to yet more lockdown restrictions, the brewery itself is also launching a delivery service, selling cask beers in either five or 10-litre boxes, dropped to your doorstep.

‘We have a lot of cask ale to save,’ they said.

In the Northern Quarter, Port Street Beer House will also be forced to close under the new restrictions.

The popular bar has said it needs to ‘get rid’ of as much beer as possible before it’s wasted and will be slashing prices in half, with cask from as little as £1.75 a pint.

Across town, subterranean Victorian drinking den The Gas Lamp will also be forced to shut from tonight.

Announcing they’d be selling cask beer for £2 a pint today, they posted: ‘Right then people, you all know the score, Andy Burnham fought our corner but Boris just swanned in and took a dump right on all our doorsteps!’

Baseball bar Base MCR is also going out swinging before it’s forced to shut from tonight.

Based in the railway arches in the Green Quarter near Victoria Station, the venue has launched its own ‘Help Out to Bat Out’ scheme, with all pints £2 and all batting cages available for £10 per 30 minutes.

In nearby Sadler’s Yard, The Pilcrow will also be locking up tonight and has a lot of crisps to shift – giving them away free as a ‘side’ with every pint.

It’s been a grim week for publicans, but there was at least some good news today as Chancellor Rishi Sunak announced more support for the stricken sector.

The Treasury’s new package includes making the Job Support Scheme, which replaces the current furlough system, more generous and grants of £2,100 available for firms in Tier 2 areas of England.

Importantly for Greater Manchester pubs, many of which have been under equivalent restrictions or even tougher ones since the end of July, payments will be backdated to August.

The Campaign for Real Ale (CAMRA) has welcomed the news.

Chief executive Tom Stainer said: ‘Pubs in areas under Tier 2 restrictions felt like they had the worst of all worlds, with additional restrictions reducing trade further but without receiving additional support – so these new financial support packages, which CAMRA had called for, will be warmly welcomed by the beer and pubs sector. 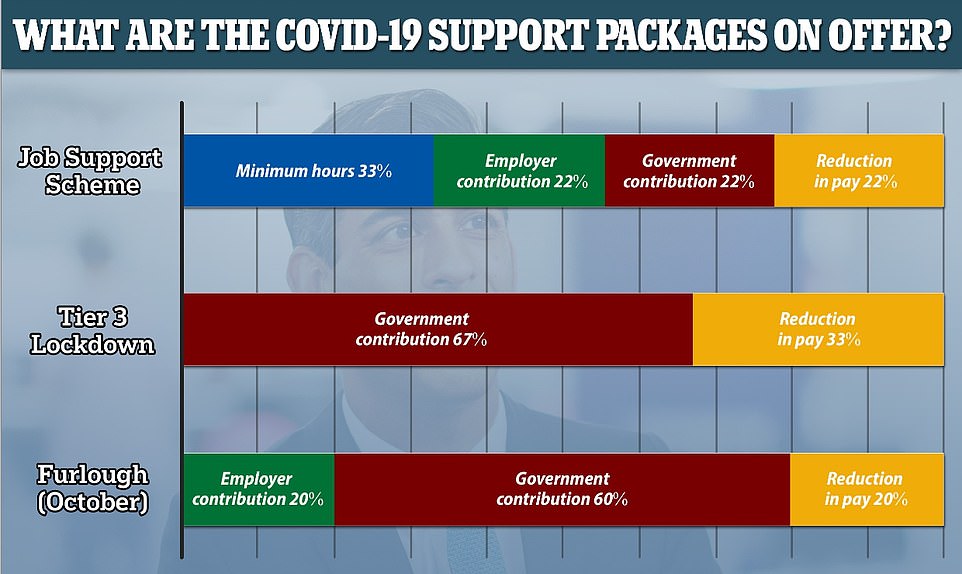 While businesses forced to close in Tier 3 areas can access significant funding, there is less available for ‘high risk’ Tier 2 regions such as London and Essex – even though the ban on households mixing indoors means many are getting hammered 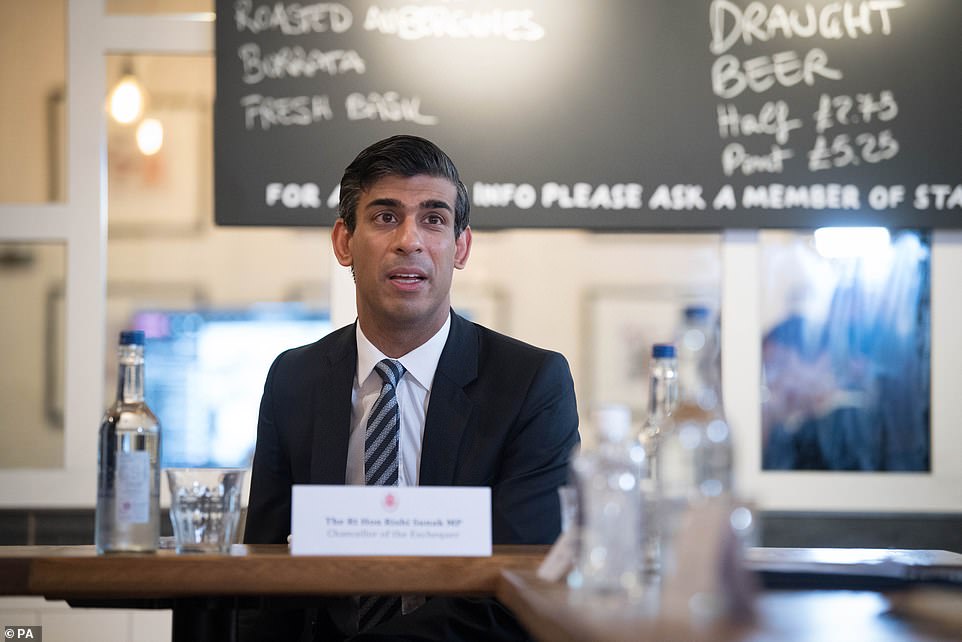 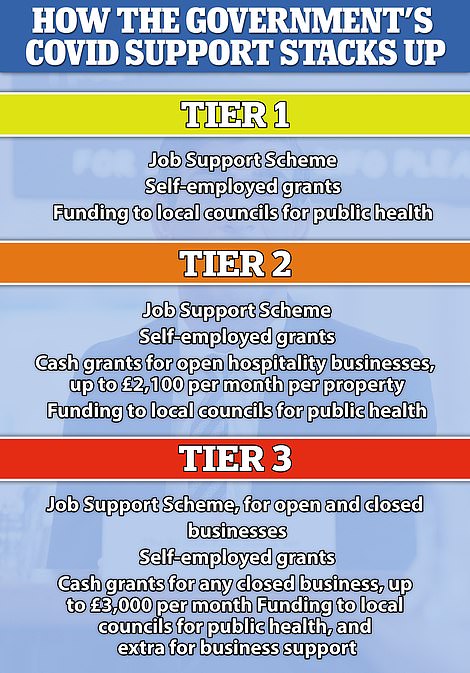 ‘New funds for councils to issue grants for pubs and hospitality businesses, together with reducing the contributions businesses have to pay towards staff wages, will give pubs in areas with high and very high restrictions a much better chance of surviving.

‘We hope that the Government will now encourage all local councils to use the 5 per cent of additional discretionary funding available to make sure that breweries and cider makers receive grants and the financial support they need to cope with reduced trade.

‘But we are not out of the woods yet. The Chancellor must look at a long-term package of financial support covering pubs and brewers in all tiers to help them cope with reduced trade and knocked consumer confidence from measures like the 10pm curfew.

‘This would make sure we avoid permanent mass pub closures and keep our locals, which are at the heart of our communities, open and alive through the difficult weeks and months ahead.’

It comes as Manchester Mayor Andy Burnham today invited Boris Johnson to the city for face-to-face talks to ‘clear the air’ as he said he does not want a ‘lingering political argument’ with the Government.

The two sides failed to reach an agreement after Mr Burnham initially demanded a £90 million bailout for businesses before saying he could not accept less than £65 million but the PM would go no higher than £60 million.

The failure to reach an agreement prompted a furious war of words but Mr Burnham said this morning he now wants to ‘reset things on a better footing’ as he claimed to be ‘misunderstood down there’ in Westminster.

He later told MPs that the Government still ‘holds all of the power and all of the money’ and that mayors have to ‘go on bended knee’ to ministers to secure funding as he called for devolution to be made a ‘reality’.

However, the chances of a repairing of relations appears slim after Commons Leader Jacob Rees-Mogg accused Mr Burnham of ‘playing party politics of the cheapest and most disagreeable kind’.

Meanwhile, Mr Johnson this afternoon denied he had gone to ‘war’ with Mr Burnham and other local leaders as he said that was ‘not the case’ and stressed he had had ‘great conversations’ with politicians across the country.