One in ten people had suicidal thoughts by the end of the first six weeks of Britain’s lockdown, research has found.

University of Glasgow academics found the pandemic and being confined to home had a major impact on the mental health of people across the UK.

The researchers surveyed 3,000 adults and found that the number of people having thoughts about taking their own life rose by two percentage points between March and May.

Although it is a small rise, it is significant given the short amount of time it occurred over, the researchers said.

Young people, women and people from socially disadvantaged backgrounds were more likely to report worsened mental health during the lockdown.

One in seven (14 per cent) of young adults had suicidal thoughts in mid-May, up from around 12.5 per cent, the study revealed.

Samaritans called the findings ‘stark’ and said they ‘leave us with no doubt Covid-19 has had a detrimental impact on the nation’s mental health’. 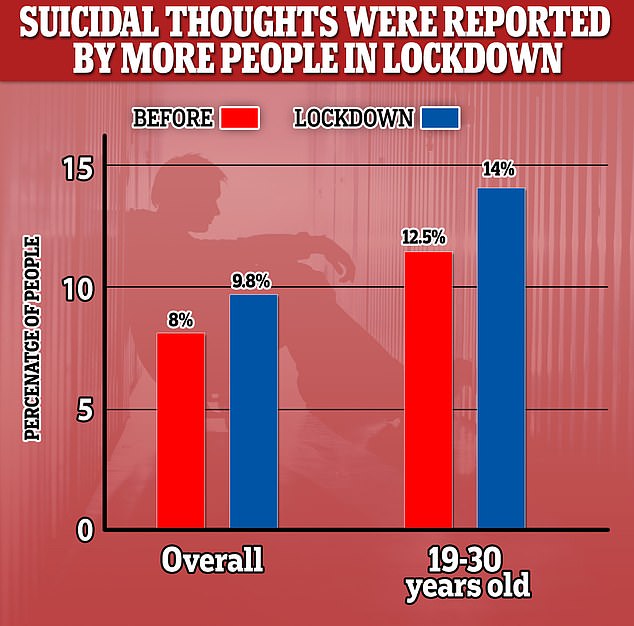 One in ten people had suicidal thoughts by the end of the first six weeks of Britain’s lockdown, research has found. Rates were even higher in those under 30. Although the increase of two percentage points is a small rise, it is significant given the short amount of time it occurred over, the researchers said

The study, which is published in the British Journal of Psychiatry, was funded by mental health charities the Samaritans, the Scottish Association for Mental Health (SAMH), and the Mindstep Foundation.

Three waves of participants between March and May were asked about pre-existing mental health problems, suicide attempts and self-harm, suicidal thoughts, depression, anxiety, feelings of defeat, feelings of entrapment, mental wellbeing and loneliness.

ONE IN TEN AMBULANCE CALLS FOR MENTAL HEALTH IN LOCKDOWN

Around one in 10 incidents attended by the London Ambulance Service (LAS) during the coronavirus pandemic involved mental health, figures show.

Mental health incidents have increased each month since March, when the Covid-19 lockdown measures were introduced.

June saw the highest proportion of attended call-outs involving mental  health, making up 12 per cent of the total, or one in eight calls.

The extended pilot saw an 80 per cent reduction in unnecessary trips to emergency departments in favour of more appropriate mental health care or referrals between January 19 and April 12.

LAS crews operating outside of the scheme discharged 41 per cent of patients at the scene with care or a more suitable referral, the LAS evaluation found.

The rising number of mental health incidents is examined in the BBC One documentary Ambulance, which will air on Wednesday at 9pm.

In the episode, crews respond to a call about a suicidal patient pulled out of the River Thames by a passer-by, and help calm down a teenager who has been self-harming.

Keith, a paramedic, said: ‘Life can be difficult and overwhelming sometimes – that’s why it’s so important for people to reach out and talk to someone they trust.

‘Sometimes one conversation is all it takes for someone to get the help they need when they are struggling.’

On the March 23, a nationwide lockdown was announced by the UK government with the public instructed to stay at home to curb the spread of the coronavirus.

Eight per cent of people in the first wave of the study, between March 31 and April 9, reported suicidal thoughts.

This raised to 9.8 per cent by the end of May, once the lockdown had kicked in.

The researchers said that even though the increases are relatively small, they are significant because of the short period of time they happened over.

They said it is not possible to make direct comparisons with pre-Covid-19 rates.

But the average rate of suicidal ideation among young adults is higher than the 11 per cent reported by young adults in a British study published two years ago.

Suicidal thoughts in the whole sample are higher than those reported elsewhere, with 2.8 per cent reporting suicide ideation in one national study of adults in 2009.

The research is considered one of the most detailed to date on mental health in the UK during the pandemic.

Professor Rory O’Connor, Chair in Health Psychology at the university’s Institute of Health and Wellbeing, who led the study, said: ‘While public health measures, such as lockdown, have been necessary to protect the general population, we know the effects of Covid-19 on the population’s mental health and wellbeing are likely to be profound and long-lasting.

‘The findings from our study, showing in particular the increasing rates of suicidal thoughts, especially among young adults, is concerning, and show that we must be vigilant to this at-risk group.’

Younger adults were more likely to report suicidal thoughts and higher levels of depressive symptoms than those aged 30-59 years and over 60.

Those aged 30-59 years reported higher rates than those over 60.

And those with pre-existing mental health conditions were found to report suicidal thoughts more than those without.

More than one in four respondents, 26.1 per cent, experienced at least moderate levels of depressive symptoms. It is not clear how much this increased over the study period.

Despite the increase in suicidal thoughts and depression, other factors related to suicide risk such as symptoms of anxiety decreased across the same period.

Participants have been followed up throughout the pandemic, and further results will be published in the coming months.

Professor O’Connor said: ‘As we move through this pandemic, investigating the trajectory of mental health and wellbeing is crucial to giving us a better understanding of the challenges people face during this difficult time.

‘By having such analysis and information, we can formulate targeted mental health measures and interventions for those most in need as this pandemic continues, as well as being prepared for future.’

Dr Liz Scowcroft, Samaritans Head of Research and Evaluation, said: ‘The findings from this study are stark and leave us with no doubt that Covid-19 has had a detrimental impact on the nation’s mental health.

‘However, it is important to remember that a rise in suicides is not inevitable. Suicide is preventable and these results demonstrate that it’s more important than ever that effective support is available for those who need it most.

‘As we continue to navigate our way through the pandemic, it is a priority for us to reach those struggling to cope and encourage them to seek help before they reach crisis point.’

For confidential support, call the Samaritans on 116123.