Children and young adults were clearly the drivers of the England’s second ripple of Covid-19, according to charts presented by one of the country’s top medics tonight.

He explained that the second wave appears to have been ignited by people in their teens and 20s catching and spreading the virus when schools and universities went back, but rates among the young are now declining in almost every region of the country, while rising in the older age groups.

Professor Jonathan Van-Tam said: ‘The infections that have seeded in the younger age groups are now penetrating the older age groups as we go forwards in time.’

Testing data from Public Health England, plotted onto line graphs, showed that coronavirus cases are now rising across all age groups in the worst-affected parts of the country.

And he said more cases among older people – particularly the over-60s – would inevitably lead to more pressure on NHS hospitals because those people are more likely to become seriously ill. 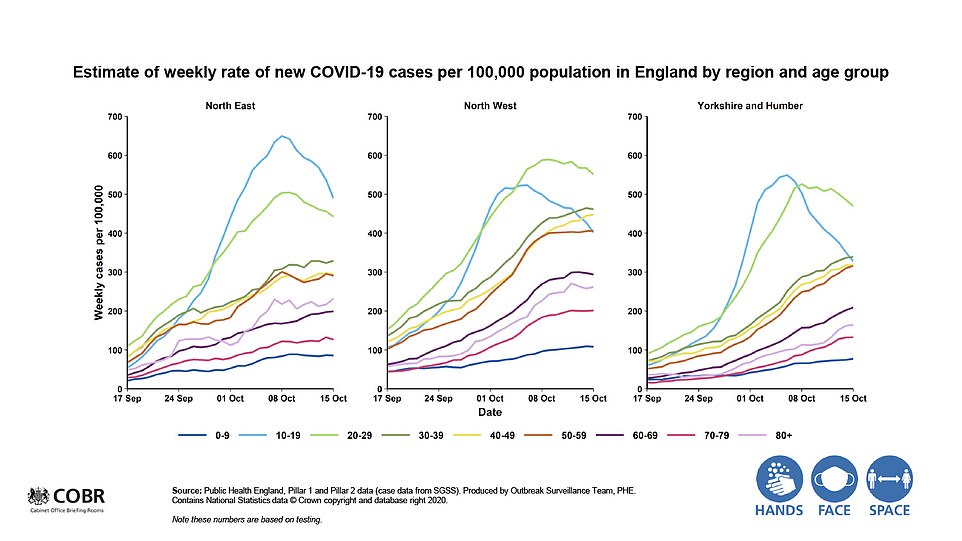 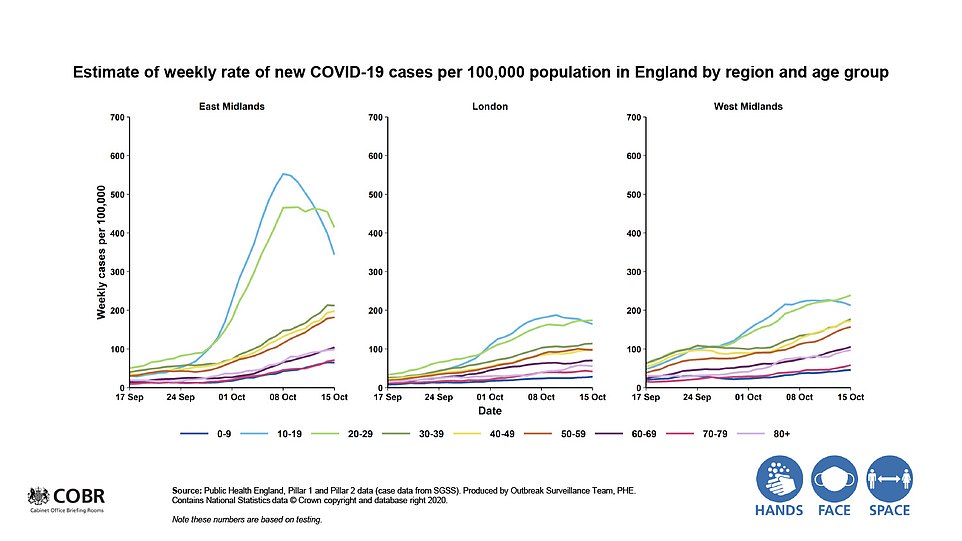 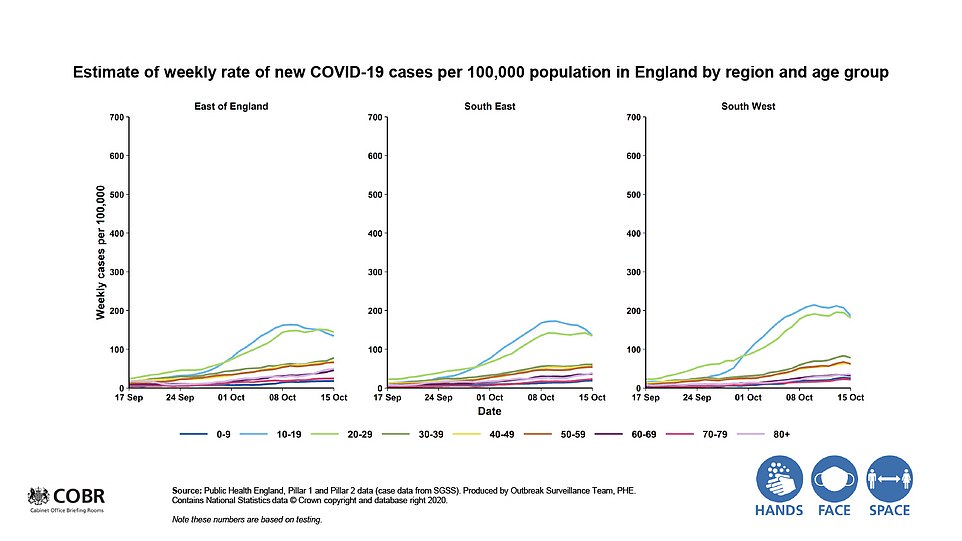 Professor Van-Tam first warned that high infection rates are now a feature across large parts of the country and no longer specifically the North West and North East, as was the case for much of September.

Illustrating the point with the usual purple and brown heat maps, he showed that the dark areas – indicating higher numbers of positive cases – have spread to cover much of the North and the Midlands, and that regions in the South East and around London are also turning darker in colour.

He said: ‘You can clearly see that that dark purple confluent problem area has extended from coast to coast now and extends quite a long way down the country.’

Department of Health data shows that Nottingham currently has the highest infection rate, measured in positive tests per 100,000 people, in England, at 723 including tests in the week up to October 15.

The areas around Liverpool and Manchester are the next worst-affected behind the Midlands city, but there are also rates higher than 100 cases per 100,000 – 0.1 per cent of the local population – across most of the Midlands, the entire of the North of England and various parts of London.

However, Professor Van-Tam admitted that in the map showing the changing rates of infection, there are now ‘more patches of green’, indicating a growing number of places are seeing their Covid rates fall.

His comments come after Public Health England data showed last week that almost a third of England’s councils saw a drop in coronavirus infections in the second week of October.

41 out of 149 councils recorded a fall in their per-person Covid-19 infection rates in the week ending October 11, according to Public Health England’s weekly surveillance report. For comparison, only two saw a drop the week before. 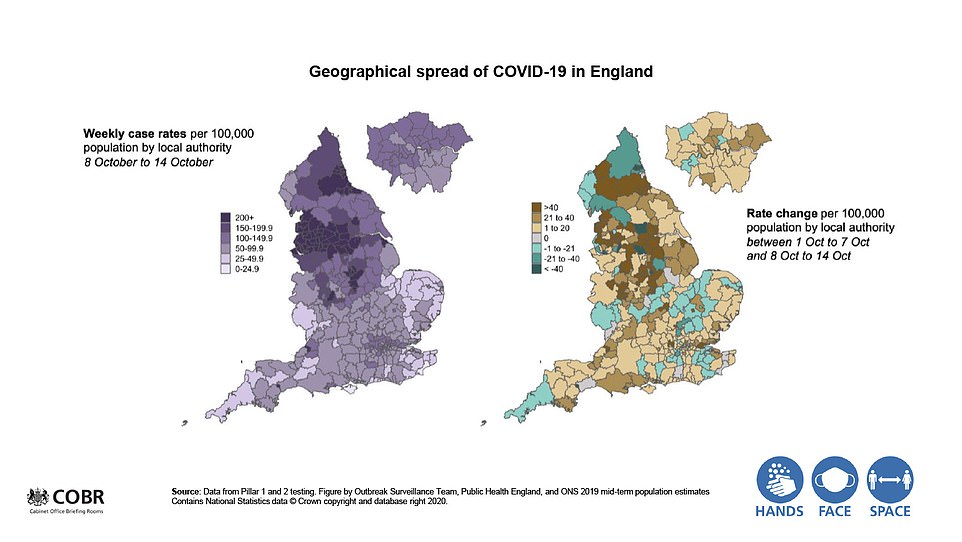 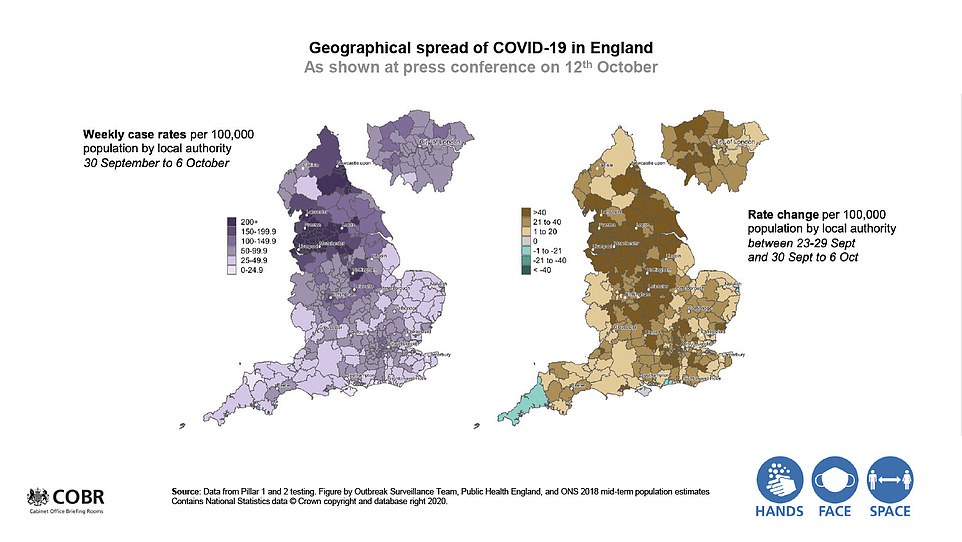 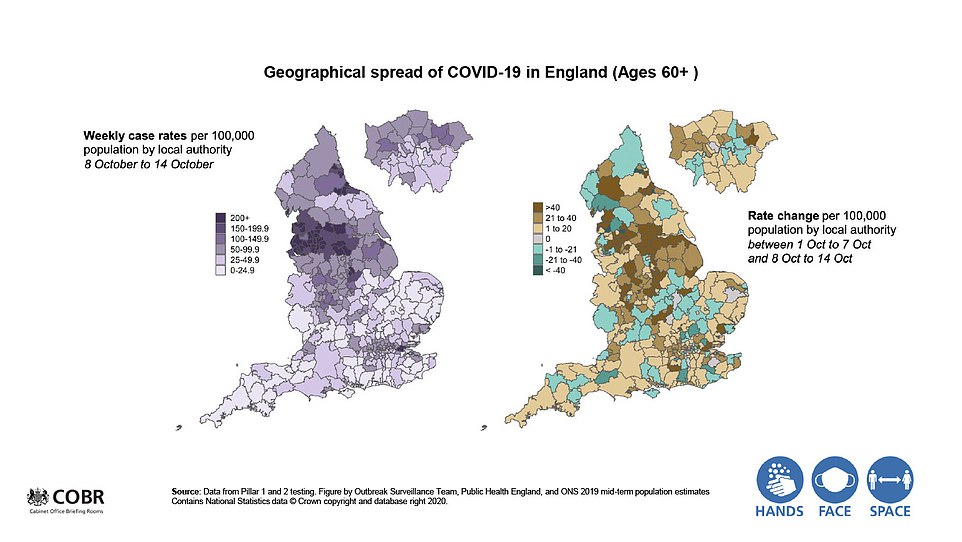 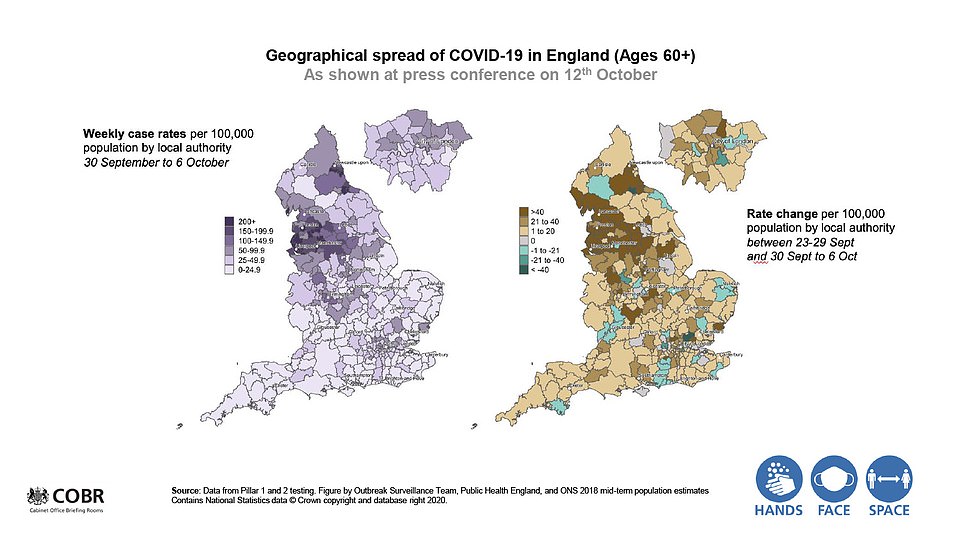 Boris Johnson today warned the UK is walking a ‘narrow path’ as it tries to squash the Covid-19 without hammering the economy with drastic lockdown rules after health officials recorded 241 more coronavirus deaths and another 21,331 cases.

The deaths mark a rise of 68.5 per cent from the 143 confirmed last Tuesday, while the cases are a 23.8 per cent jump on 17,234. The number of people admitted to hospital rose to 1,019 on October 15, data published today showed, marking the first time since May that it had surged into four figures.

Although the numbers are rising across the board, there are signs the outbreak is slowing down in large parts of England, with infection rates falling in recent weeks and the speed of increase in national numbers shrinking and stalling in mid-October.

England’s deputy chief medical officer Professor Jonathan Van-Tam, sent out by ministers to set the scene for tougher lockdown rules in Manchester tonight, admitted there are ‘more patches of green’ this week on heat maps that show how infection rates are changing across the country.

And he claimed the outbreak had morphed into a ‘game of two halves’, pointing to data showing that the weekly infection rates have declined for 10-19 year olds and 20-29 year olds. But in the same breath, he warned that cases ‘seeded in the younger age groups are now penetrating those older age groups’, who are most at risk of becoming severely-ill or dying from Covid-19.

To further illustrate the point that coronavirus is now spreading into older age groups Professor Van-Tam used heat charts that show how infection rates have risen in different groups over time.

On the scale of yellow to purple to black, the darker a square is, the higher the infection rate in that age group at that particular time.

The scale illustrates that although the high numbers of infections (dark boxes) have started in younger age groups they gradually migrate into the older ones.

The pattern, which moves dark boxes diagonally upwards and right as cases spread into older groups, is seen most clearly in the North West, North East and Yorkshire and the Humber.

But it is becoming increasingly noticeable this week in the East Midlands, West Midlands. London and South West of England. These places are not as far along the process of the second wave as the Northern parts of the country but are beginning to show the same signs.

The first heat map he presented, which covered data up until October 1, showed infection rates were growing in 16 to 30-year-olds and starting to creep into the older groups.

But ‘very clearly now’ the infection rates have increased markedly in the older groups in the weeks from October 1 to October 15.

The North West is reporting a seven-day rolling average of around 300 cases per 100,000 in those over the age of 60, the highest of any region followed closely by the North East.

Professor Van-Tam said the difference in data within one week was ‘pretty stark’, adding: ‘This is most concerning because it is the penetration of the disease into the older age groups that gives the NHS significant problems.’

He added the data showed two sides of one coin – that infections were now declining in those under 20 years old, but rising in those 30 and above. This was the case across all regions, but infection rates are much lower in the south compared to the North West, North East, East Midlands and Yorkshire and the Humber. 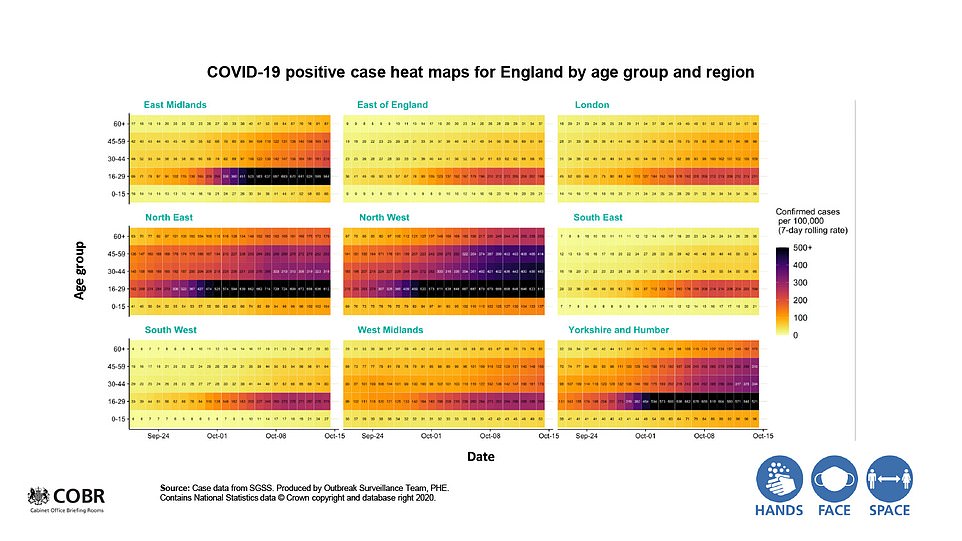 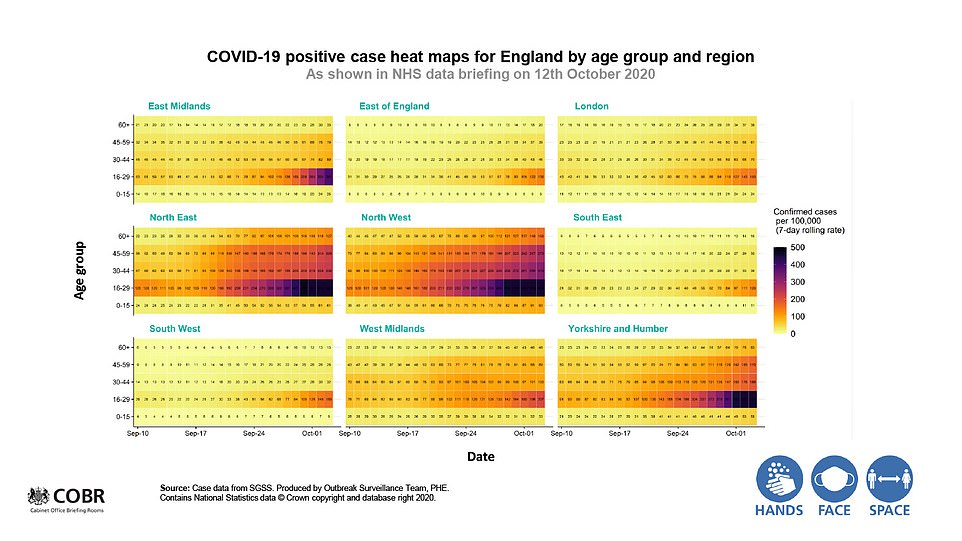 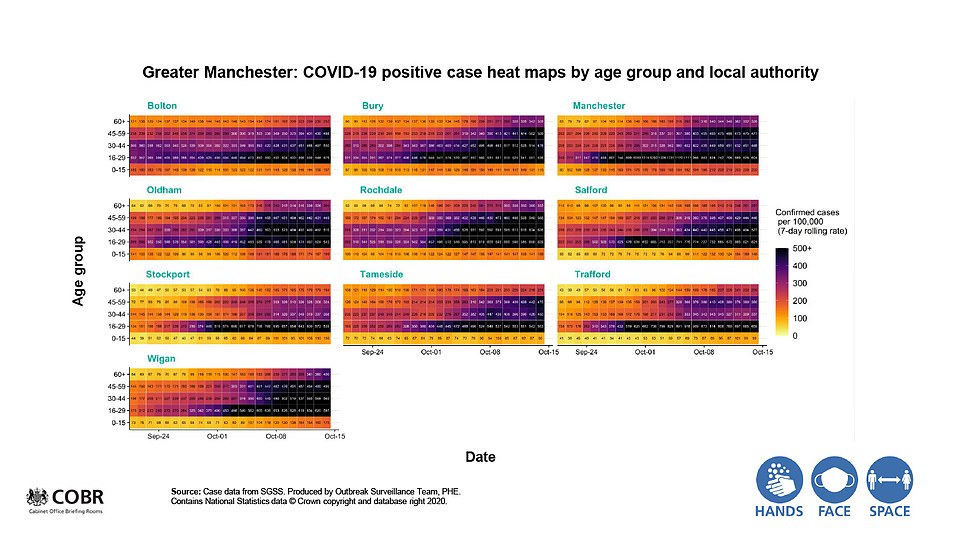 Hospital admissions rising in all adult age groups, led by the elderly

Statistics presented by Professor Van-Tam showed that hospital admissions are now rising in all adult age groups in England, particularly in over-45s and most noticeably in over-85s.

Professor Van-Tam has warned that hospital admissions and deaths will continue to rise for weeks because they have been ‘baked in’ by infections that have already happened.

Although he does not support a full lockdown, Professor Van-Tam said it was vital that the NHS is not ‘consumed by Covid’ and that it is able to carry on its other work.

His concerns were echoed by Professor Stephen Powis, national medical director of NHS England, who said: ‘The last thing we want to do is eat into the capacity that we have in hospitals that we use to treat other conditions.’

Professor Powis warned that Liverpool University Hospitals are expecting to have higher numbers of Covid patients by Wednesday this week than they had during the peak of the first wave in April.

Intensive care admissions are also up, the data showed, with Department of Health data showing that 592 patients were put onto ventilators on October 16 – the most recent figures – up from 440 the week before that and 368 a week earlier.

There are currently 5,402 people in hospitals in England with coronavirus, with the majority of them in the Northern parts of the country. A total of 3,144 of the patients with in the North East and the North West.

Professor Van-Tam’s slides showed that the numbers had risen in all regions in the last week. 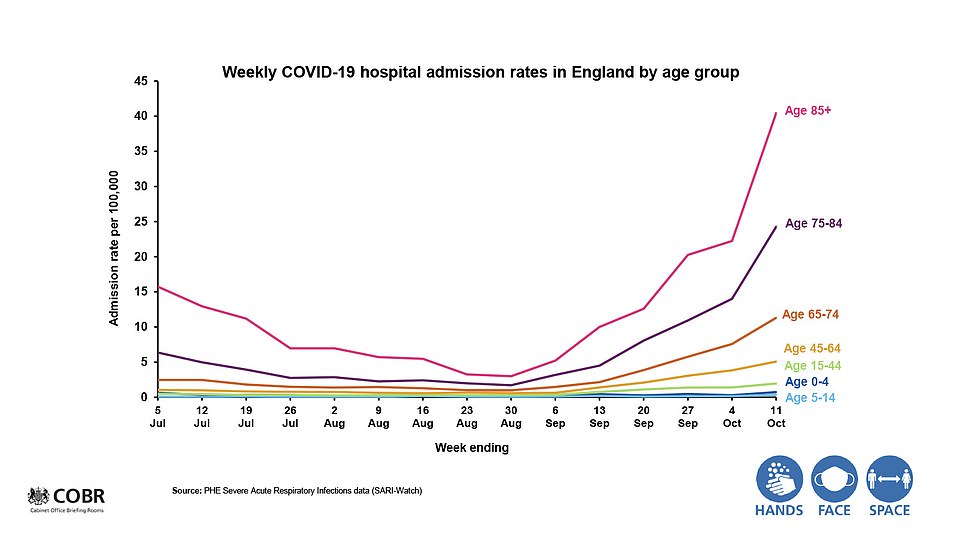 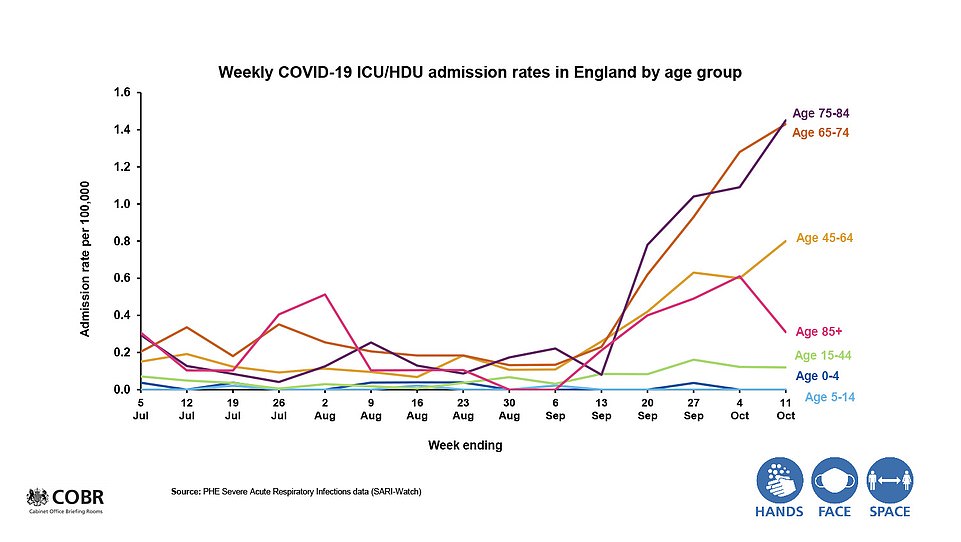 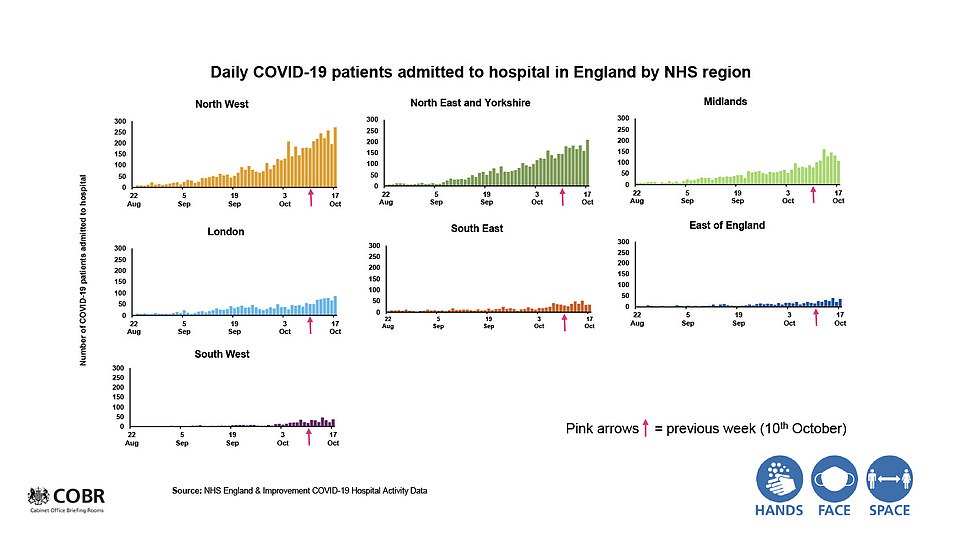 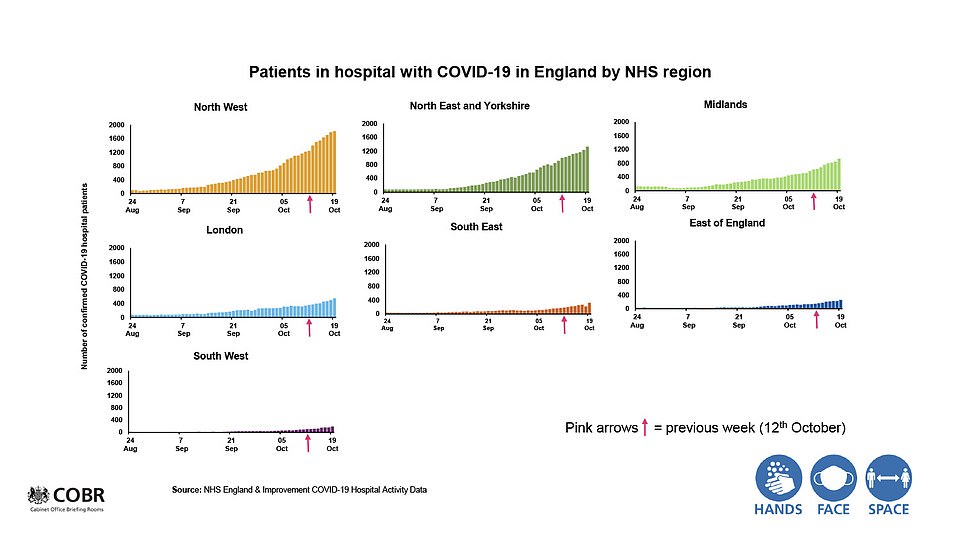 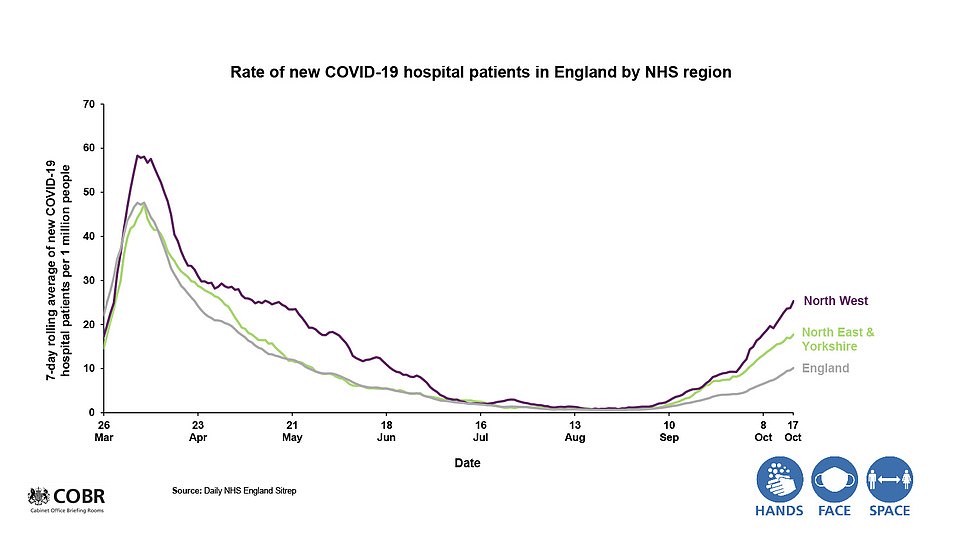 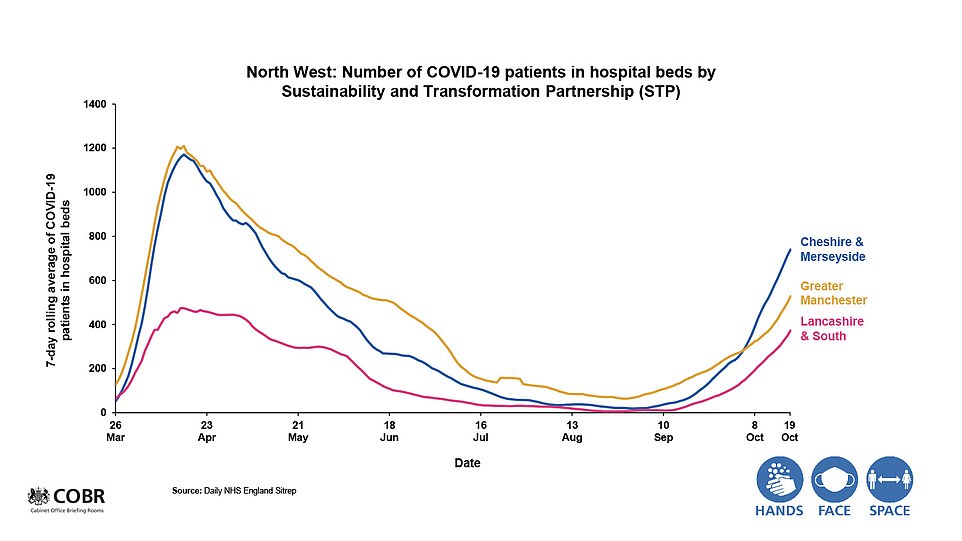